Moeijelijk Mine: Limpopo community says it lives in the shadow of death 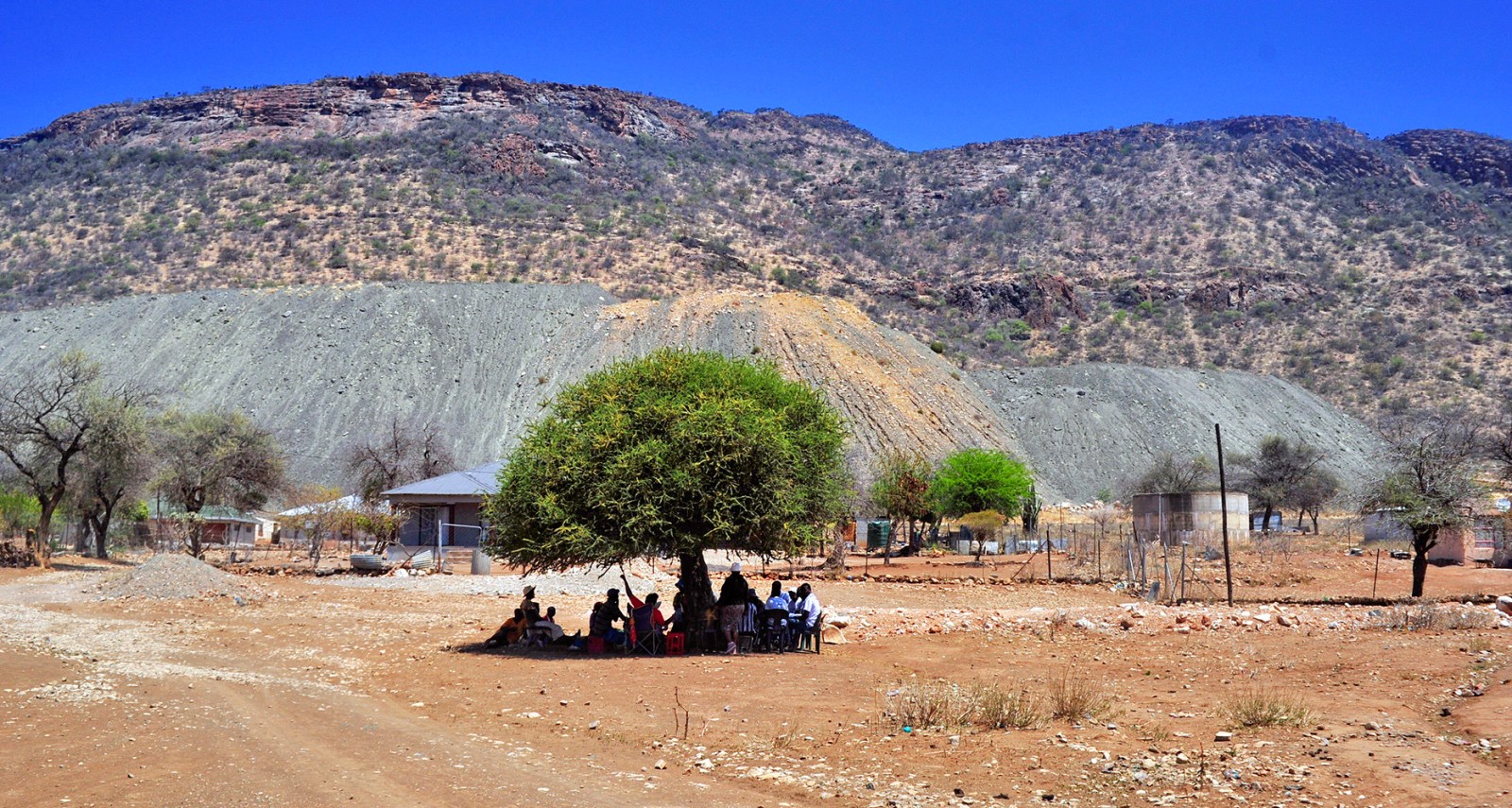 Residents meet under a motlopi tree in Jibeng, Limpopo, to discuss challenges faced by the community from mining operations by the Moeijelijk Mine, owned by Bauba Resources. Residents say that communication with the mining company is poor. (Photo: Lucas Ledwaba / Mukurukuru Media)

Residents say they face daily danger from homes damaged by extraction operations in their village — and now they want action.

The cracks on the walls of Stoki Moloto’s home near the Moeijelijk Mine in Limpopo are so wide she can see right through them while sitting in her bedroom.

The pensioner said she now lives with the constant fear that someday, the walls of the home she has lived in for more than three decades could collapse and bury her and her grandchildren alive.

Her home in Jibeng, a village in the Sekhukhune District Municipality, is located within 500 metres of the Moeijelijk Mine, which is owned by Bauba Resources. The mining operations in the area began in 2015, but the village of Jibeng has been there for decades.

“I have lived here for many years. My house was never like this. This problem only started when they started mining here. Now we have a problem with dust and insects crawling in through the cracks,” said Moloto, pointing to the wide cracks in her bedroom.

Jibeng is in the platinum metals group mineral belt in Sekhukhune. The Sekhukhune District Municipality acknowledges mining as the biggest contributor to its economy, and the sector is predicted to grow at an average of 5.64% annually from R12.4-billion now to R16.3-billion in 2023.

The district had a population of more than 1.1 million in 2019, with 689,310 people living in poverty, according to the Department of Cooperative Governance and Traditional Affairs (Cogta).

Limpopo premier Chupu Mathabatha told a recent mining investment conference that on average, mining contributed 25% to the provincial economy over the past 15 years. He said that in the past five years, mining had contributed 90,000 direct jobs to Limpopo and that its direct and indirect impact contribution had in the period increased from 8% to about 15%.

However, despite its contribution to the economy, communities continue to endure the negative impact of mining.

A 2016 report by the SA Human Rights Commission titled “National Hearing on the Underlying Socio-economic Challenges of Mining-affected Communities in South Africa”, noted that “despite extensive regulation and notable attempts by mining companies and government to implement progressive and sustainable projects, current industry practice is characterised by inconsistent legal compliance and reflects concerning legislative gaps”.

The report further said that “many mining-affected communities continue to experience significant levels of poverty and systemic inequality, which reinforces the notion that the benefits of mining operations disproportionately favour mining companies and the state and are often to the detriment of local communities”.

Moloto said that once during a storm a roof caved in while a family slept. Miraculously, no one was injured. She fears the worst now that it is the rainy season.

Another resident, Martha Selepe, said she built her seven-room home in 1991 and the structure was solid until the mining operations commenced.

“When you are in one bedroom, you can see someone in the next one through the cracks. We never had these problems until the mine started operating,” she said.

The Selepe home, which boasts a well-manicured lawn and wonderfully tended orchard, is among those closest to the towering mine dunes. The cracks are clearly visible both inside and outside on the bright yellow walls.

Selepe said she had been frustrated because she did not know how to communicate her challenges to the mine owners. Other residents expressed the same frustration. They have since formed a committee representing households located within 500m of the mine, which operates along a towering hill south of the village.

Humburg Sekhwela, chairperson of the committee known as the “500m Radius Affected People in Jibeng”, said 81 houses had been damaged as a result of mining activity.

“The mine (Bauba) doesn’t care about us any more. They no longer stick to the agreements we had before they started to mine here,” said Sekhwela.

He said the agreement with Bauba before the mining was that the homes closest to the operation would be moved somewhere further to limit the negative impact from the operations, which included blasting.

He said however, Bauba advised that this would not happen immediately as the operation was still new and could not afford such a development.

Sekhwela said further to the problems related to cracked homes, the village residents face a constant threat from high levels of dust emanating from the mine. He also lamented that the residents were not benefiting from the mining operations despite being the host community.

Bauba Resources spokesperson Brenda McRobert said that in 2014, before mining began at Moeijelijk Mine, the company developed a visual record of homes and structures in Jibeng, including all those within 500m of the mine.

McRobert said in addition, they commissioned structural surveys conducted by an external company on all the homes within 500m of the mine in 2015 and again in 2017.

“These surveys also showed that some of the houses had substantial structural damages before any mining and/or blasting commenced at Moeijelijk Mine. As a result of these surveys, the mine decided as a matter of goodwill to repair houses within the 500m (radius). This included putting in place plans to replace 50 homes that were too badly damaged to be repaired,” she said.

McRobert said 25 houses had already been built. She said Bauba was currently spending about R110,000 a month on the rebuilding and repair projects and had spent more than R9-million on this work to date.

“They say they are building houses, but they are only building one house a year,” he charged.

Khomotšo Mojela and her family live in one of the new houses built by Bauba. The brightly coloured house comprises four spacious rooms and a bathroom. Previously the family lived in a dilapidated two-roomed house whose walls had been dangerously damaged when the mining activity started.

“We could no longer sleep in that house. It was no longer safe, but we are grateful for this new house. We no longer live with the fear of dying under that old house,” said Mojela.

But Sekhwela noted that the walls of some of the newly built houses had also begun cracking. He said the community wants Bauba to move those affected to an area further away from the mining operations, which he said was the initial agreement with Bauba before the mining operations began.

“They told us they will move those homes that are affected. But they said because they are still a small company they could not do that immediately. But now we have agreed as a community that we should be moved from here and taken to a place far from the mine,” said Sekhwela.

McRobert acknowledged that some of the first replacement houses were built and subsequently cracked.

“Bauba had a specialist carry out investigations where it was found that the soil in the area is of such a type that a special foundation needs to be laid; this is due to the soil shifting heavily between dry and wet seasons,” she said.

But she denied that there was ever an agreement or discussion about the relocation of the community.

“This is not a matter that has been raised with the mine by community representatives,” she said in response to a question on whether the issue of relocation had been discussed previously and if it was in their plans.

She also refuted accusations that Bauba had failed to contribute towards the development of the area and that it did not provide enough jobs for locals.

“More than 80% of our workforce is from local communities and we have many local contractors that carry out work for the mine,” she said.

She said Bauba had additionally fitted and installed pumps, tanks and tank stands and continued to pay for the electricity each month to pump water into tanks and a reservoir that provided a substantial portion of the community with clean water.

Sekhwela said that while the water infrastructure had been installed as alluded to by McRobert, the water supply from the taps provided was erratic and irregular.

“We are asking the mine to help us. We have been living with this problem for a long time now,” he said.

Meanwhile, back in the village, Moloto is worried and hopes for a resolution.

“The mine must do something. We need help. They should not wait until something bad happens to someone,” she said. DM/MC – Mukurukuru Media