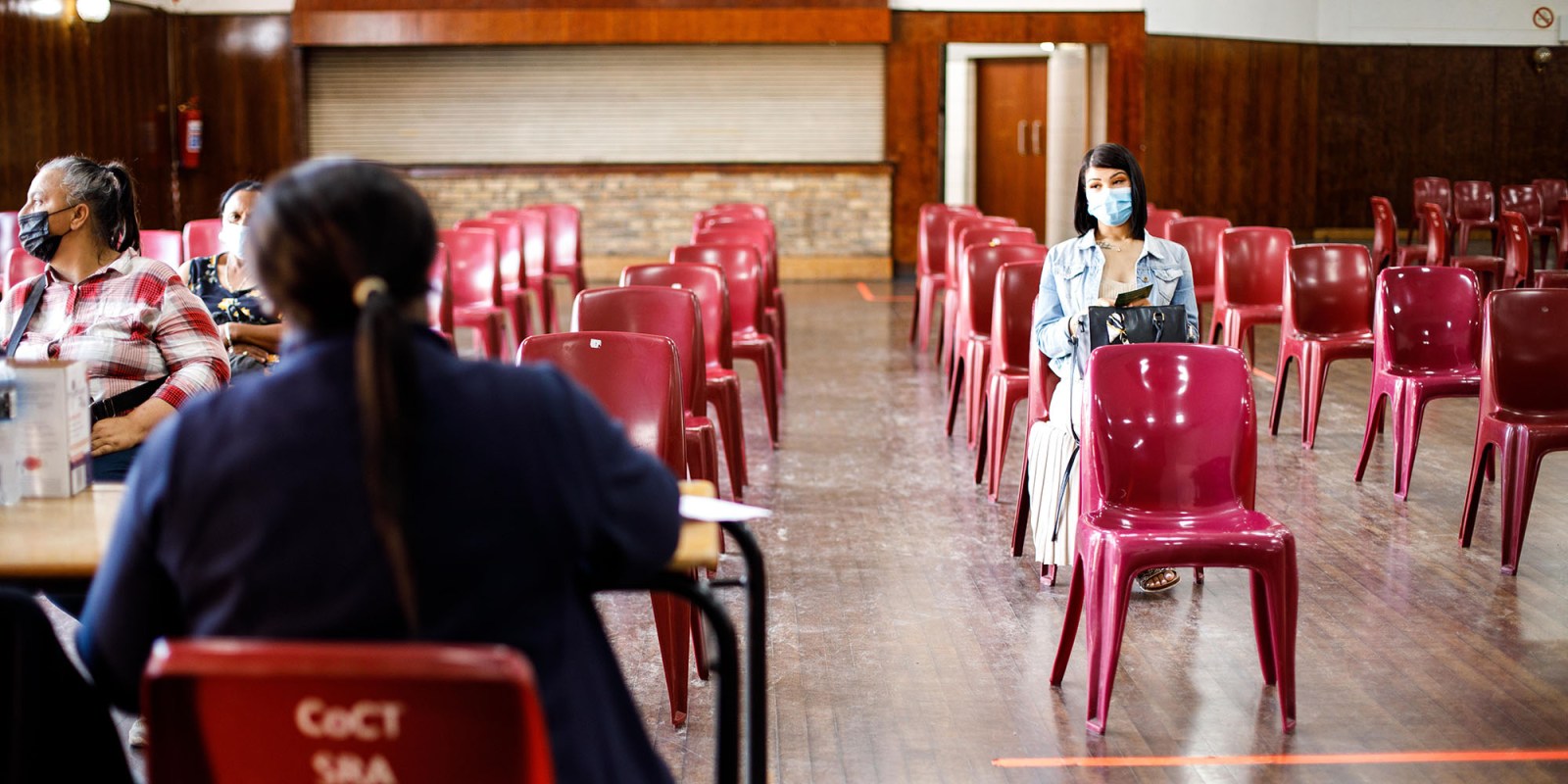 Hospitals in some parts of the US are already starting to see the impact of an autumn wave of Covid-19 infections, the latest sign that the healthcare system still faces serious pressure from the virus, even in places that have achieved relatively high vaccination rates.

The head of the organisation representing companies in labour relations at the US’s largest ports is worried that the federal vaccine mandate set to take effect in January could worsen the current supply chain crisis. 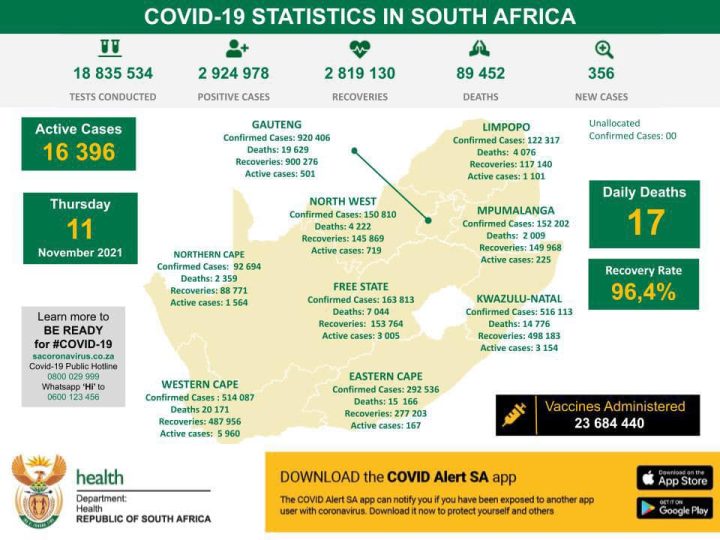 One of Austria’s regions is planning a lockdown for unvaccinated residents, with tighter rules also looming for those without an inoculation in the Czech Republic. New cases in Germany jumped by more than 50,000 in a single day as the southern state of Bavaria declared the latest wave a “disaster situation”.

Moderna is selling its Covid-19 vaccine to the African Union at $7 a dose, much less than the price other countries paid for the shot earlier this year.

Moderna’s vaccine was seen as one of the more expensive shots, with the company’s chief executive officer having given a range of $25 to $37 per shot for the two-dose vaccine.

Only 44% of Americans support requiring Covid-19 vaccines for schoolchildren aged five to 11, who became eligible for the shots last week, according to a Monmouth University poll.

The survey, conducted by phone from 4-8 November, also found that around 59% supported school-based vaccine mandates for teachers and staff. Around 53% backed the requirements for children 12 and older. The survey’s margin of error was plus or minus 3.5 percentage points.

Mauritius is reimposing restrictions as cases and deaths rise again amid the spread of the Delta variant. Starting Friday, bars and nightclubs will be closed and sports activities, concerts and picnics will be banned, Prime Minister Pravind Jugnauth said in a statement on national television. Fewer people can attend funerals and weddings.

“People went to the beach, did shopping and attended parties without taking the necessary precautions,” the prime minister said. “With such carelessness, the situation has deteriorated… We must react.”

The head of the organisation representing companies in labour relations at the US’s largest ports is worried that the federal vaccine mandate set to take effect in January could worsen the current supply chain crisis.

James McKenna, president of the Pacific Maritime Association, which negotiates labour agreements for 70 companies at 29 West Coast ports, said he’s concerned that some workers who aren’t vaccinated won’t report for duty if there’s a mandate in place. McKenna estimates 30% to 40% of local dockworkers aren’t vaccinated.

“Probably the worst thing that could happen to us is to have less bodies available to man these terminals,” McKenna said in an interview.

Roche and Regeneron’s antibody cocktail has been recommended by a European Medicines Agency committee for authorisation as a treatment for Covid-19.

That paves the way for the use of Ronapreve, the drug combination, in the European Union. The drugmakers already have approval for it in the US

Myanmar announced the lifting of the stay-at-home order imposed on 17 townships in seven provinces where Covid-19 cases sharply declined in the past two weeks, according to the Ministry of Health

Moderna held a brief conference call to defend the safety of its Covid-19 shot from a barrage of questions about associated heart risks in young people.

Chief Medical Officer Paul Burton acknowledged on the call that the company’s Covid-19 vaccine does appear linked to increased chances of an inflammatory heart condition known as myocarditis in young men. Moderna maintains that the benefits of the vaccine continue to outweigh the extremely rare risk of myocarditis, he said on Thursday.

Hospitals in US west under siege

Hospitals in some parts of the US are already starting to see the impact of an autumn wave of Covid-19 infections, the latest sign that the healthcare system still faces serious pressure from the virus, even in places that have achieved relatively high vaccination rates.

Intensive-care beds occupied by Covid-19 patients are climbing in 12 states from two weeks earlier, with most in a contiguous strip running from Arizona and New Mexico, through the Great Plains and into Minnesota. In several Western states, many doctors and nurses haven’t caught their breath from the last round of infections.

The Dutch national health service reported 16,364 new coronavirus infections on Thursday, the highest daily number since the start of the pandemic.

The Outbreak Management Team, which advises the cabinet, is recommending a two-week period of “lockdown-like measures” in a bid to prevent infections from rising further, according to Dutch news network NOS.

The Austrian region with the highest coronavirus infection rate will impose a lockdown for unvaccinated people in an effort to contain the pandemic.

Upper Austrians who haven’t taken the vaccine will be allowed to leave home only for work and to buy everyday goods from Monday, several newspapers said on Thursday, citing state leader Thomas Stelzer. The national Covid task force has recommended a similar measure for neighbouring Salzburg state.

India has resumed exports of vaccines to other nations, the foreign ministry said on Thursday.

“Some shipments have already taken place while others are in the pipeline including through the Covax facility,” spokesman Arindam Bagchi told reporters in New Delhi.

Bulgaria, the EU’s least vaccinated country, has asked the bloc to activate a protection mechanism under which it can receive oxygen, respirators and beds from other countries “in case of a sudden worsening” of the pandemic, the health ministry said.

While the spread of the disease has slowed, the country has the world’s second-highest overall Covid death rate after Peru.

Israel started a national drill in the format of a war game to test the nation’s readiness for the outbreak of a new, lethal Covid-19 variant.

The drill will test national management in Israel of new strains yet to be discovered and will take place over three sessions.

While Israel remains among the most protected nations worldwide because of its vaccine roll-out, the government is preparing for all scenarios, Prime Minister Naftali Bennett said in a statement.

A fire at a hospital treating Covid-19 patients in the southern Romanian town of Ploiesti killed two people and injured a nurse. It’s the fourth deadly fire that takes place in Romania since the pandemic started. Despite seeing a slowdown in new cases in the past week, Romanian hospitals are still overwhelmed with Covid patients and the intensive-care units are running at full capacity.

South Africa’s measures to reduce the spread of the coronavirus may limit the severity of the next wave, the official running the national vaccination programme said.

Africa’s most-industrialised nation has fully vaccinated about a third of its 40 million adults and has kept in place prevention measures including a curfew, limits on gathering and mandatory use of masks in public. The country has had the worst confirmed outbreak on the continent, with almost three million infections and about 90,000 deaths.

“If we continue with social distancing, we will still get a fourth wave, but it will be mild,” Nicholas Crisp, the deputy director-general of South Africa’s Department of Health, said in an interview, citing mathematical modelling.

The number of new cases in Germany jumped by more than 50,000 in a single day for the first time, and the southern state of Bavaria declared the latest wave of the pandemic a “disaster situation”.

Olaf Scholz, who aims to succeed Chancellor Angela Merkel early next month, said Germany needs to be “winter-proofed” against the disease, and it will be mostly up to state governments to decide which measures and restrictions are needed in their region.

“Many fewer vaccinated people are affected by the infection than those who haven’t been inoculated,” Scholz said Thursday in a speech to the lower house of parliament. DM