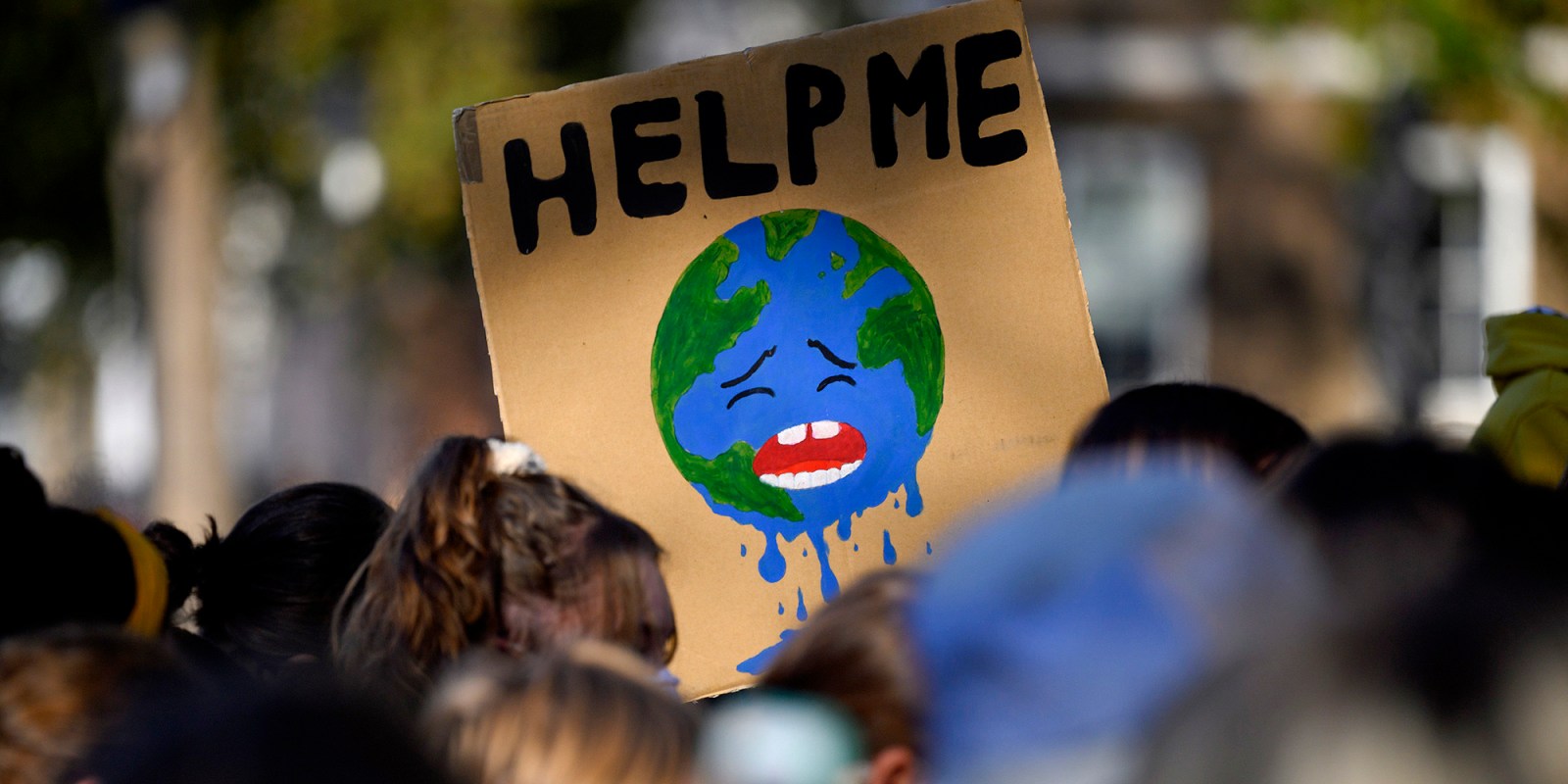 LONDON, ENGLAND - NOVEMBER 05: Supporters of the United Kingdom Student Climate Network (UKSCN) march through Westminster during a climate protest as the UK hosts COP26, on November 05, 2021 in London, England. The 2021 climate summit in Glasgow is the 26th "Conference of the Parties" and represents a gathering of all the countries signed on to the U.N. Framework Convention on Climate Change and the Paris Climate Agreement. The aim of this year's conference is to commit countries to net-zero carbon emissions by 2050. (Photo by Leon Neal/Getty Images)

The climate crisis isn’t the problem; capitalism gone toxic is, says activist and academic Jacklyn Cock, who plots out where pushback in the form of new ‘eco-politics’ might offer some solutions.

The thread connecting humans with the climate crisis joins in an especially tangled bind at the point where profit turns to greed and capitalism turns to tyranny.

The activist and academic Professor Emeritus Jacklyn Cock highlighted this during a webinar on Tuesday night. The presentation of her research focused on the impact and complexity in the ongoing legal wrangle over the controversial granting of mining rights in the Mabola Protected Environment, near Wakkerstroom in Mpumalanga, to the Indian-owned mining company Atha-Africa Ventures (now operating as Uthaka Energy) to do underground coal mining there in August 2015.

Cock said: “The driver of the climate crisis is the profit-driven nature of capitalism, and the disregard from people, especially towards workers and nature. Neoliberal capitalism and the power of particular corporations is the real problem that is facing us in terms of the immediacy of the climate crisis — not the Anthropocene.”

Her research was presented as part of Wits University’s Society, Work, and Politics Institute “Alternatives to Capitalism” web series.

Cock used the Mabola mining example to demonstrate what stands to be lost for communities and the environment, what props up toxic capitalism and how entrenched systems become society’s norm. In turn, toxic capitalism keeps cycles of consumption and fossil-fuel dependence spinning and with it a faster spiral towards climate change doom.

The Mabola region is regarded as a critical watershed and important freshwater source for South Africa. It is also ecologically important for birdlife, especially several species of crane that are endangered. But the decision in 2015 by the then minister of environmental affairs Edna Molewa and the then minister of mineral resources Mosebenzi Zwane to allow Atha-Africa Ventures (now Uthaka Energy) to mine in the region has been called an outrage and challenged.

For Cock, the decision by the government to allow mining in an ecologically sensitive region takes South Africa further away from the transition from coal dependence, and deserves to be challenged.

Beyond the environmental impact on this region, which is one of 22 protected areas that supply half of the country’s fresh water, there are other questions that need to be asked.

Cock said issues that need to be addressed include:

“There is a very ugly picture of manipulation of people and resources and a toxic atmosphere linked to a barrage of threats and intimidation from mining corporations,” she said.

The power of corporate muscle, she added, has allowed the mining company to keep the process stalled in the courts — for six years already, also to use social media and PR campaigns to push its agenda and to win political favour that has included attempts to revoke the protected status of the region.

But, she said, encouragingly, the Mabola example has also shown key strengths of “new eco-politics”. The alliance of eight organisations has begun to shape new strategies as pushback against corporate bullying and the abuse of state power.

“The struggle and success of the alliance [in the Mabola case] raises important questions for resistance to coal and other environmental justice struggles, because it involves mobilising the power of judicial activism, empowering local communities, challenging a corrupt and dysfunctional state, disseminating knowledge of coal’s pollution of air and water, recognition of the desperation for jobs, especially in areas of high unemployment, challenging the hegemonic discourse of economic growth, combating the power of extractivism and connecting labour and environmental activists in strategic alliances,” Cock said.

In discussion with Cock was Mazibuko Jara, a former chief strategist for the South African Communist Party till 2010 and executive director of a community-owned rural development initiative, Ntinga Ntaba kaNdoda.

Jara said that along with an emphasis on building more ground-up civil society alliances, labour also has been brought into the fold by breaking the jobs and prosperity promises that hardly ever materialise.

Jara said local government had to be strengthened to be more accountable and robust in playing a bigger role in advancing communities in a way that is not dependent on extractive industries or foreign investment and funding.

He said: “Conservation has led to dispossession, so it’s going to be very difficult to navigate without sustained organising in a way that really informs, empowers, educates and enables the local community to work out the options, including the implications of coal mining.

“And this is a challenge when the state is not going to look at other pathways to livelihoods or to jobs, or even just the basic question of food for people.

“At the same time, the local state, in theory, is a power to advance community-driven integrated development planning.”

Cock’s webinar presentation took place against the backdrop of COP26 coming to the end of its second week of negotiations in Glasgow. Delegates and their entourages were criticised for only reaching compromises, not fixed carbon-emission targets and consequences for non-compliance; and for doing little more than enlarging their carbon footprints by flying into the Scottish city.

It was also a week of load shedding in South Africa, which reached Stage 4, leaving a panellist unable to take part.

These developments and events, Cock said, speaking to Maverick Citizen after her presentation, show very real challenges for new eco-politics.

She said the real costs of putting on events like COP26 had to be counted. Load shedding also demonstrates the slowness in weaning off coal, which in the hands of a dysfunctional government is unable to be managed and transformed.

She added that even the announcement of $8.5-billion from the US, UK and the European Union that was made at COP26 to help South Africa to make a quicker transition from coal to renewable energy has come with serious concerns that the money does “not end up funding someone’s daughter-in-law’s nail salon”.

“Ultimately we will have to learn to live more simply by consuming less and conserving more. We have to share what we have and learn to be in solidarity with others. We have to unlearn selfishness and the competitiveness that capitalism teaches us and we have to face up to the fact that we are complicit in the climate crisis.