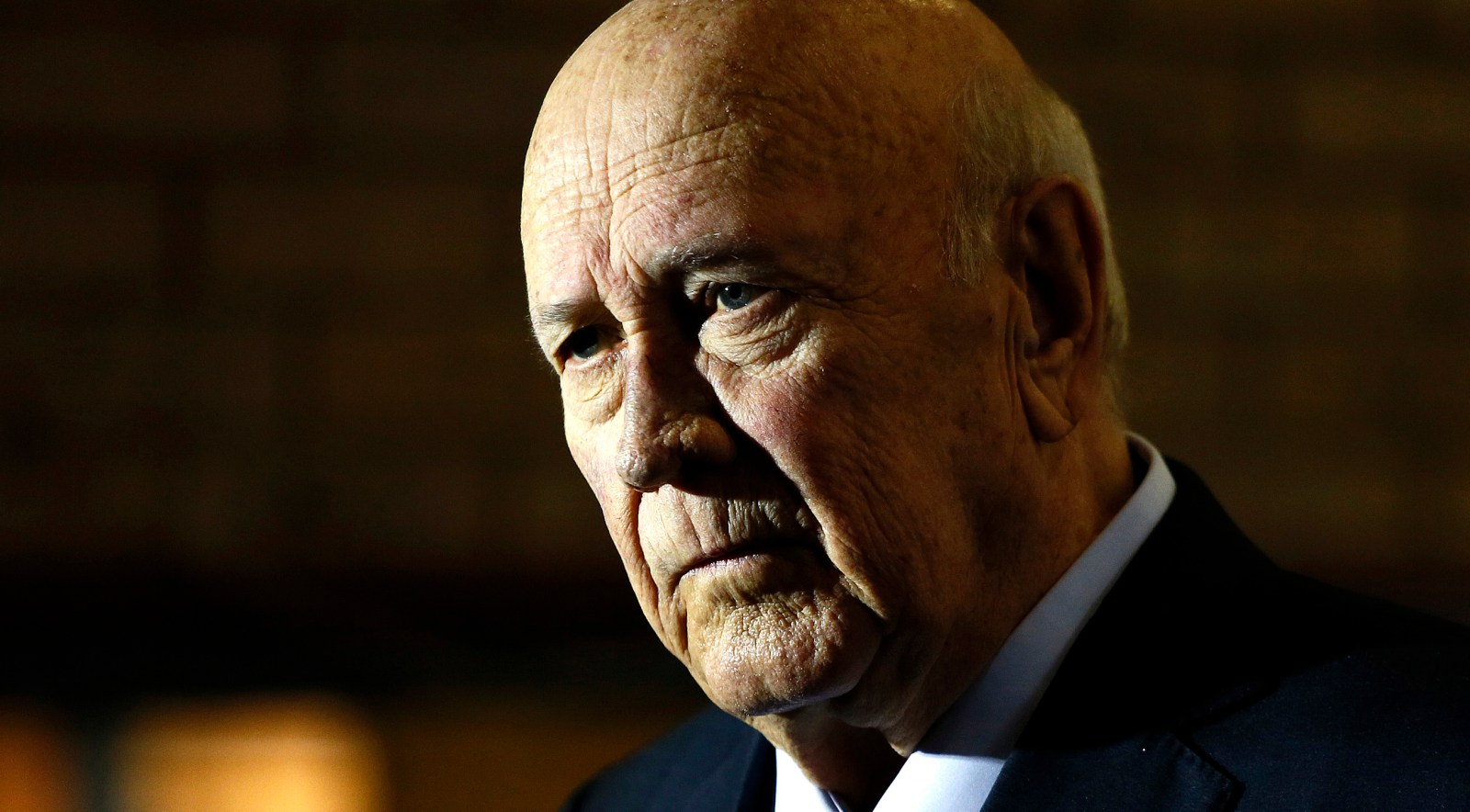 Former president of South Africa, FW de Klerk looks on during the funeral service of former foreign affairs minister Pik Botha that was held at NG Kerk Wonderpark on October 28, 2018 in Pretoria, South Africa. De Klerk died on 11 November 2021 at the age of 85. (Photo by Gallo Images / Phill Magakoe)

On the morning of 11 November 2021, the FW de Klerk Foundation confirmed that FW de Klerk had died. In March this year, de Klerk announced that he had been diagnosed with a form of cancer, mesothelioma. He passed away at his home in Fresnaye.

On Thursday, the FW de Klerk Foundation confirmed that FW de Klerk, who was the last apartheid president, died on Thursday morning.

On De Klerk’s 85th birthday in March this year, he announced that he had been diagnosed with mesothelioma, which is a form of cancer that affects the tissue lining of the lungs.

In June, the foundation had said “There has been no discernible deterioration in [De Klerk’s] health since he was diagnosed in March with mesothelioma”. Following his diagnosis, De Kerk had undergone immunotherapy, said the foundation.

A statement released by the Nelson Mandela Foundation noted: “De Klerk’s legacy is a big one. It is also an uneven one, something South Africans are called to reckon with in this moment”.

As well as being the last head of state of the pre-democratic South Africa, Frederik Willem de Klerk was also a deputy president — 1994-1996 — in the country’s first democratically elected government.

He shared a Nobel Peace Prize with South Africa’s first democratically elected president, Nelson Mandela, in 1993, awarded to the men for their work in bringing about the end of apartheid.

In 2002, De Klerk was awarded the Order of Mapungubwe, South Africa’s highest honour, for being “bold enough to lead white South Africa out of an unsustainable and untenable apartheid system towards a non-racial, non-sexist, prosperous and democratic South Africa”.

He remained a divisive, controversial figure up until his death. Writing on De Klerk as Minister of National Education and Planning, academic Christi van der Westhuizen, wrote: “As minister of education between 1984 and 1989, he was the political principal responsible for the continuing implementation of ‘Bantu education’. This system was most devastating, enforcing the racial hierarchy through the limitation of black people’s life opportunities from an early age.”

The former President occupied an historic but difficult space in South Africa,” said a statement  from the office of Archbishop Desmond Tutu and his wife, Leah Tutu.

“Although some South Africans found the global recognition of Mr De Klerk hard to accept, Mr Mandela, himself, praised him for his courage in seeing the country’s political transformation process through.”

After Mr De Klerk appeared at the Truth and Reconciliation Commission before Archbishop Tutu, the Archbishop addressed the media to express disappointment that the former President had not made a more wholesome apology on behalf of the National Party to the nation for the evils of apartheid. But in more recent years, the Tutus and De Klerk’s developed closer relations, said the statement.

“The late FW De Klerk played an important role in South Africa’s history. At a time when not all of his colleagues saw the future trajectory of the country unfolding in the same way, he recognised the moment for change and demonstrated the will to act on it. To the family of the late President we extend our deepest condolences. May he rest in peace and rise in glory,” said the statement.

De Klerk was born in Johannesburg on 18 March 1936 and comes from a lineage of National Party political leaders. His father, Jan de Klerk, was a cabinet minister and the president of the South African Senate. De Klerk’s uncle, JG Strijdom, was the second apartheid prime minister.

The son of a politician, De Klerk graduated from Potchefstroom University with a law degree in 1958 and went on to establish a law firm in Vereeniging.

From a young age, De Klerk was active in Afrikaner nationalist organisations before joining the apartheid parliament in the early 1970s, heading various portfolios like Mines and Energy Affairs and National Education and Planning.

In September 1989, De Klerk became the president of the country and introduced a number of reforms.

A few months later, he met with jailed Nelson Mandela. In February 1990, Mandela was released from prison and De Klerk unbanned political parties such as the African National Congress and the Pan Africanist Congress.

Soon thereafter, negotiations took place for South Africa’s transition to a democratic state. After the historic elections in April 1994, De Klerk joined the government of National Unity but resigned as deputy president in 1996 and as head of the NP in 1997, retiring from politics.

The following year, 1998, his autobiography was published, The Last Trek — A New Beginning.

In 1999, he established his foundation, the FW de Klerk Foundation and then another in 2004 — the Global Leadership Foundation.

More recently, at the start of 2020, he came under fire for “not fully agreeing” that apartheid was a crime against humanity. He later issued a statement where he apologised for his role in apartheid and for “the confusion, anger, and hurt” he may have caused. He insisted, though, that he felt apartheid should not be categorised as genocide. The FW de Klerk Foundation supported him with a statement saying that the notion that apartheid is a crime against humanity is soviet propaganda. They went on to retract the statement and they and De Klerk acknowledged that his comments had been unacceptable.

In a TV interview, De Klerk said that some white people still regarded him as a traitor for his work in dismantling apartheid.

De Klerk is survived by his wife Elita Georgiades whom he married in 1998, and his children Jan and Susan (from his first marriage to Marike de Klerk to whom he was married from 1959 to 1998. a third child, Willem de Klerk, passed away on 7 October 2020 after a battle with cancer). DM