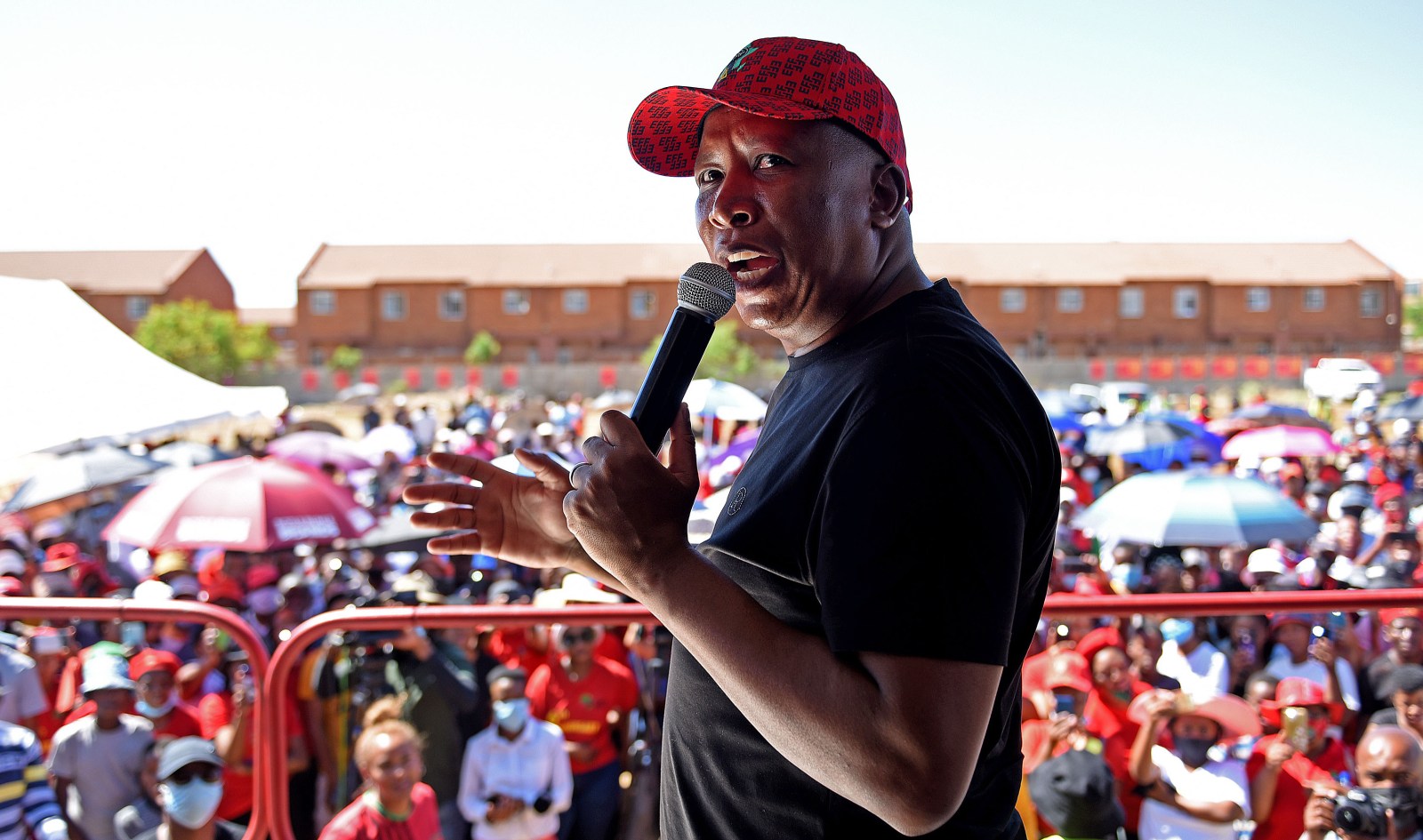 Unlike the DA and the ANC, the third-biggest party in South Africa, the EFF, showed growth in the local elections. However, there was no red wave. Performance was patchy — high in some areas with new gains, and a struggle in provinces originally responsive to its message. The red berets will be dissecting the varied outcome as they prepare for the general elections in three years.

It was a tough election for the ANC and the DA. Of the big three parties, only the EFF registered growth. The party received 10% of the vote, up from 8% in 2016. It has more public representatives today than it did on the morning of 1 November. It has more fighters taking up seats on councils across the country to spread the gospel of the party and advocate for its values and policies. However, did the party fall short of its expectations? Despite Covid-19 restrictions, it still drew impressive crowds across the country. Julius Malema left no stone unturned as he covered significant territory in this campaign.

See this article on his campaign movements over a week: The campaign trail criss-cross diaries: A week in politics

In 2019, the EFF remained the official opposition in North West and Limpopo, while adding Mpumalanga to its official opposition column. It made big strides in KwaZulu-Natal and to some extent the Eastern Cape. This northern party was spreading its wings from the mining belts and Limpopo to other provinces. In 2019, the EFF consolidated itself as the third-biggest party and, more importantly, had a much wider footprint. It also grew from 6% to 11%. Its growth in the local government elections was more modest. This was against the backdrop of the governing ANC being more unpopular in this election compared with the national and provincial elections in 2019.

The EFF had a great election in KwaZulu-Natal, tripling its representation in eThekwini, growing from eight seats to 24. It is now a significant actor in this metro, and any party wanting the keys to the mayoral office needs to knock on its door.

It was a key player in bringing the ANC well under 50%, and also helped humble the ruling party in the provincial capital of Pietermaritzburg in Msunduzi, where it grew from three seats to an impressive 10. The ANC has other options to get an ANC mayor elected here, but these returns for the EFF are very impressive. The EFF will be kingmaker in uMhlathuze (Richards Bay) where it doubled its seats from three to six. The party did well in Newcastle, growing from five to eight seats and playing a part in halving the ANC’s vote share.

The EFF will be a key fixture in KwaZulu-Natal politics over the next five years. It also made giant strides in the ANC heartland of southern KwaZulu-Natal, ensuring that it is a significant player in places like uMdoni (Scottburgh) and Ray Nkonyeni (Port Shepstone).

In Mpumalanga, the EFF grew from eight to 14 seats in the provincial capital Mbombela. It replaced the DA as the official opposition here and hurt the ANC in a Lowveld stronghold. The EFF came close to doubling its seats in Emalahleni and Bushbuckridge. It grew off the ANC in the former, and a local party in the latter. In Govan Mbeki (Secunda) on the Highveld Ridge, the ANC and DA know the EFF is the kingmaker after it grew from seven to 13 seats as the ANC lost much ground. The EFF also made some gains in Steve Tshwete (Middelburg) and will be the kingmaker in crowning the next mayor of this municipality. The party has consolidated itself as the second-largest party in the province.

Up and down in Gauteng

It was a mixed bag in Gauteng. The party lost its third place in Johannesburg to ActionSA, and will return with one less councillor. It also lost seats in Tshwane. Ekurhuleni saved the party from a Gauteng Metro hat-trick of seat losses as it gained 31, up from 25. Despite the DA losses in Tshwane and Johannesburg, it still has more than double the number of seats of the EFF in all three metros. The EFF did increase its seat share in large municipalities like Mogale City (Krugersdorp), Emfuleni (Vereeniging) and Rand West City (Randfontein). The party was instrumental there in further weakening the ANC.

Up in the Free State

The EFF had growth in most of the significant Free State municipalities. It improved from nine to 12 seats in Mangaung, and from six to nine in Matjhabeng (Welkom), while it ended up tied with the same number of seats as the DA in Metsimaholo (Sasolburg), upping its tally from eight to 12. The party will determine who the next mayor is in Metsimaholo. The EFF lost support to a popular party in Maluti-a-Phofung (Phuthaditjhaba). It struggled to make significant headway in rural municipalities, but has shown general growth in the areas where the majority of Free State voters are.

A struggle in traditional areas of support

The EFF struggled in the provinces that were originally the most responsive to its message. In Limpopo, the party fell from 27 seats to 21 in Polokwane as the ANC grew there. In 2016, the EFF was instrumental in helping remove the ANC from power in Thabazimbi and Modimolle-Mookgophong in the Waterberg region. It lost seats in both and the ANC has a realistic path to taking these two municipalities back from the opposition.

The EFF lost ground in all other relatively major population centres in Limpopo, including Thulamela (Thohoyandou), Makhado and Tubatse. The results were more mixed in North West where the party lost a lot of ground to local parties in Rustenburg and could not grow in Madibeng (Brits). It lost seats in Mogwase (Moses Kotane), but was able to grow in Matlosana (Klerksdorp) and gained five seats in Mahikeng.

Malema had a Limpopo advantage when he went head-to-head with Jacob Zuma’s ANC in Limpopo in 2014 and 2016, but it started to taper off when the ANC went into the elections in 2019, led by Cyril Ramaphosa. It was even more pronounced in the ANC’s favour in the 2021 local government elections. The Vhembe (Makhado, Thohoyandou) region is an ANC fortress and the EFF will need to go back to the drawing board. However, Tubatse is where populist parties have gained traction in the past. The red berets will see it is an underperformance.

It seems the further from the platinum belt, the better the EFF did. Its message resonated better in places like Klerksdorp and Mahikeng than it did in Rustenburg, where local parties like the Tsogang Civic Movement seemed to attract EFF voters. A reason for the slender growth in Klerksdorp and Mahikeng could be the EFF exploiting the ANC’s infighting in those two areas.

Up in the Eastern Cape

In this province, the EFF went from eight seats to 13 in Buffalo City and added two to its tally in Nelson Mandela Bay. It had modest growth in relatively dense population areas such as Mthatha, Butterworth and Libode, but remained on the same seat tally in Komani and Bizana. The party was unable to replicate in the Eastern Cape what it did in KwaZulu-Natal.

Some gains in the Northern Cape

Here, there were some gains for the EFF in Sol Plaatje (Kimberley), Mothibistad and Kuruman. It could not gain an additional seat in Upington.

The red berets have fewer than three years until the next election. When 2024 comes around, Malema is likely to still be the fitter and more energetic major party candidate. It will, however, be his third national and provincial election as party leader. Will he and his party still be a novel alternative for voters?

Will its performance in 2024 be emblematic of what the party achieved on 1 November in eThekwini, or will it be more modest, as in Nelson Mandela Bay? Or will it be more akin to what it achieved in Tshwane, Polokwane and Rustenburg — a slide backwards rather than forwards?

There was no red wave at the end of the day. The party is in a better position today than it was on the day before the election, but it surely expected to do better in the north of the country. DM

See our interactive provincial maps here showing all the results across the country: The Full Picture

Wayne Sussman is an elections analyst for Daily Maverick.