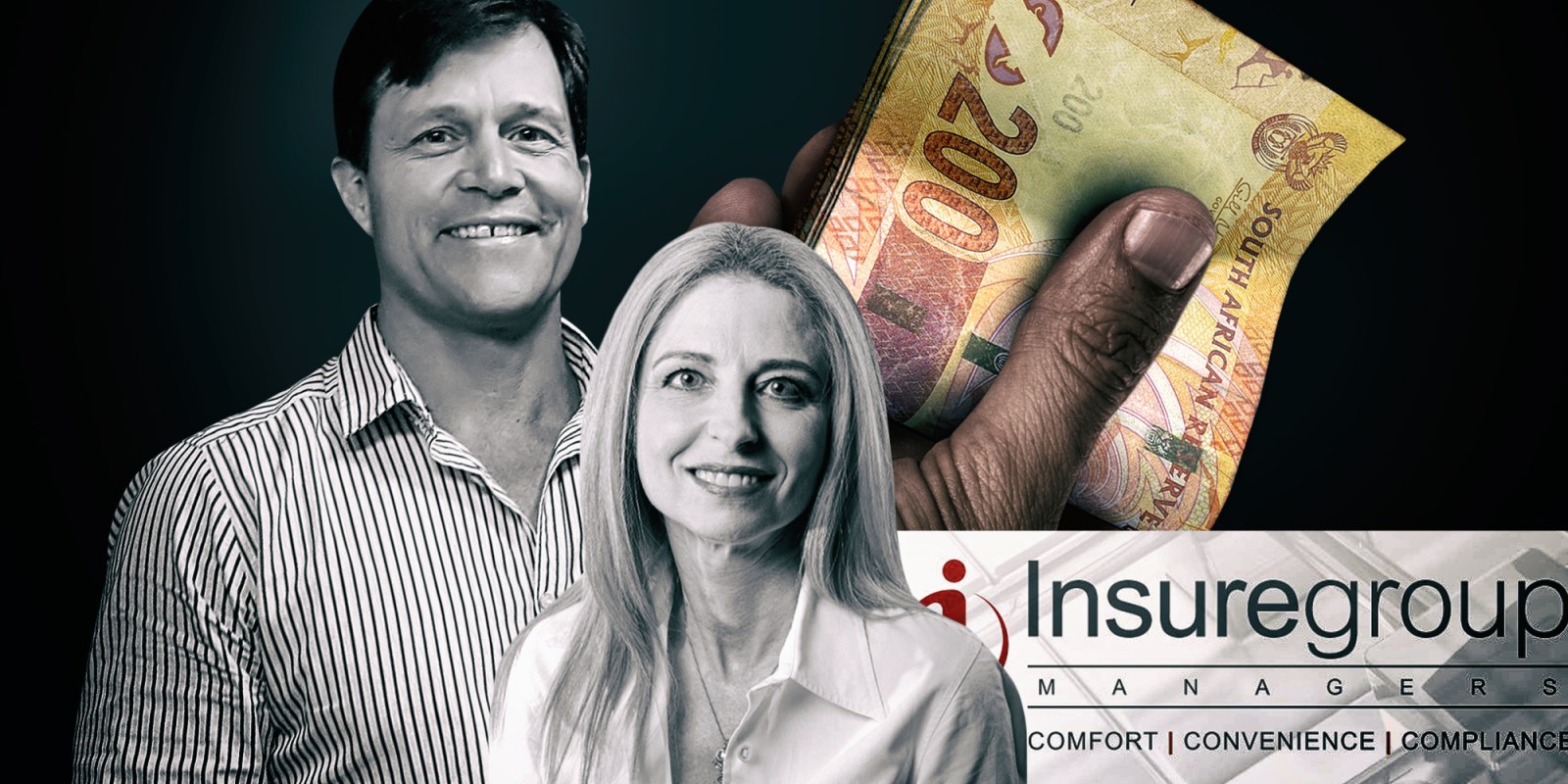 The exact nature of the alleged crimes perpetrated at Insure Group Managers when its directors misappropriated R1.7-bn in premium funds — from which it bought wonky assets and paid about R160-million in dividends to owners Charl Cilliers and Diane Burns — has been detailed in a reportable irregularities report and several affidavits submitted to the Hawks.

The report recommends criminal charges to be instituted based on a litany of financial crimes.

Insure, now in liquidation, was a financial intermediary whose business included collecting insurance premiums from the public, which had to be paid over to the relevant insurers within 45 days of collection.

Being a dominant player in the market, hundreds of millions of rand in premiums collected from South Africans insuring their assets ran through Insure’s books every month.

In 2018, the house of cards came tumbling down when Insure had no liquid funds left to pay over to 45 insurers, including Hollard, Santam, Old Mutual and Guardrisk. The company filed for voluntary curatorship.

Insure’s curator Pieter Bezuidenhout found a R1.7-billion black hole in the company’s accounts. After an investigation, Bezuidenhout concluded that company chief Charl Cilliers and director for compliance Diane Burns were the directing will and minds of the business and declared the scheme illegal, probably criminally so.

In this reportable irregularities report filed with the FSCA, Bezuidenhout sketched a picture of delinquent directors who acted without honesty and integrity, managing Insure in a reckless or negligent way while using crafty accounting techniques to hide the alleged crimes.

Scorpio had sight of the reportable irregularities report and gained insight into several affidavits submitted to the Hawks’ Serious Financial Crimes office and can now for the first time reveal the exact nature of the allegations against Cilliers, Burns and, possibly, Insure’s range of directors. These allegations are still untested by a court, but the FSCA based its decision on the curator’s findings when it debarred Cilliers and Burns for five years from being financial service providers, based on honesty and integrity requirements.  The Short Term Insurance Act, 53 of 1998, shields the public from shouldering any repercussions of the Insure fallout and subsequent R1,7-billion debt.

Since then, Cilliers and Burns stopped replying to Scorpio’s questions and requests for context. They made no exception for this article.

Previously, both Cilliers and Burns consistently denied having done anything wrong.

They argue that their conduct and management of the financial intermediary was within the remit of all relevant laws. Burns previously told Scorpio she is aggrieved at being “singled out” with Cilliers while other company directors seemed to have escaped the FSCA’s net. She claims a conspiracy against them by the insurance industry. Burns offered no substantiating fact for this claim.

Insure’s curator, industry regulator the FSCA, industry body FIA as well as insurers who lost a collective R1.7-billion, disagree with their protestations of innocence.

The story is, essentially, that Cilliers and Burns managed and ultimately owned Insure Group Managers, a company that collected premiums from the public, but did not pay it over to insurers within 45 days, as stipulated in the Short Term Insurance Act 53 of 1998 (STIA), its regulations and their contracts with the relevant insurers.

Instead, Insure secretly bought illiquid, speculative and ultimately loss-making assets using the premium funds, with the goal of making a profit that the insurers were not to share in or be told about. Scorpio reported on this before.

(Cilliers and Burns deny that they were in breach of STIA its regulations and company contracts. They further seem to argue that much of their machinations were recorded in the company’s books — free and open for anyone, including the FSCA, to scrutinise.)

To plug the cashflow hole the scheme created, Insure negotiated a R250-million credit facility with VBS Mutual Bank. But when VBS imploded without warning in early 2018, one of the knock-on effects was the disappearance of Insure’s credit line. Its cash was tied up in illiquid assets — and based on the reportable irregularities report, we now know that the rest of the premium money was spent on company expenses, directors’ remuneration and dividend payments.

It meant no money was left to repay insurers. In the financial world, and for a company operating under stringent financial legislation, this is a big deal.

So, in late 2018, curator Pieter Bezuidenhout took control of the business.

The goal: to investigate the cash crunch, manage the company, sell the assets and distribute the proceeds to insurers and creditors.

Considering that Insure was an industry leader and Cilliers a chartered accountant, Bezuidenhout’s findings are hair-raising. He traced some unlawful behaviour to as far back as 2004.

Insure’s debt and inability to repay R1.7-billion to insurers and creditors were the result of, the curator found, the wilful and reckless misappropriation of insurance premiums. It used premium money to buy and maintain wonky assets, pay the company’s operational expenses, repeatedly fund questionable inter-company loans and, alarmingly, pay about R200-million in dividends and directors’ remuneration.

The scheme was shielded from scrutiny by cooking the books, the curator alleged.

As an example, he lists how Insure — in a highly questionable fashion — loaned money to subsidiaries Ericode and PCI, companies holding a mining rehabilitation plant and property portfolio respectively.

The interest on these loans, calculated to a total of about R400-million, was captured in the financial statements as if Ericode and PCI had paid this amount in interest. Except, the R400-million in interest wasn’t paid back, the curator found.

Yet, these supposed funds were already used to pay incentives to brokers, settle Insure’s expenses (which included almost R50-million in directors’ remuneration) and, perhaps most shockingly, to pay just over R160-million in dividends to Cilliers and Burns.

The reality, according to the curator, is that premium money — meant to be paid over to the insurers — was used to fund these dividends, remuneration and expenses.

If true, such conduct would breach several financial acts, some of which can land a perpetrator a hefty jail sentence. Cilliers and Burns did not reply or offer context when Scorpio questioned them about these allegations.

In another example of crafty bean-counting, Insure reevaluated company assets, resulting in inflated value. This, the curator said, gave the financial statements a healthy veneer.

Business at Insure was carried on recklessly or negligently, with intent to defraud stakeholders and in breach of several provisions of the Companies Act No 71 of 2008, the curator concluded.

Insure further contravened provisions of the Financial Advisory and Intermediary Services Act, 37 of 2002, the Financial Institutions (Protection of Funds) Act 28 of 2001 as well as the Short Term Insurance Act, 53 of 1998.

All of this to make a secret profit not to be shared with the insurers.

It caused simmering anger in the industry.

Several affidavits based on Bezuidenhout’s findings, in some cases alleging theft or fraud, were submitted to the police. The case was referred to the Hawks’ Specialised Commercial Crimes unit, due to the eye-watering amount involved. Cilliers and Burns, Scorpio is told, have been contacted by investigators.

The reportable irregularities report, if found to stand on firm legal ground, may well be a harpoon to the heart of Cilliers and Burns’ consistent denials.

In the next article, Scorpio will focus on the current civil litigation aimed at recouping insurers’ money — even if it means the auditors pay for alleged negligence. DM