Ramaphosa: We will not go into coalitions at any cost 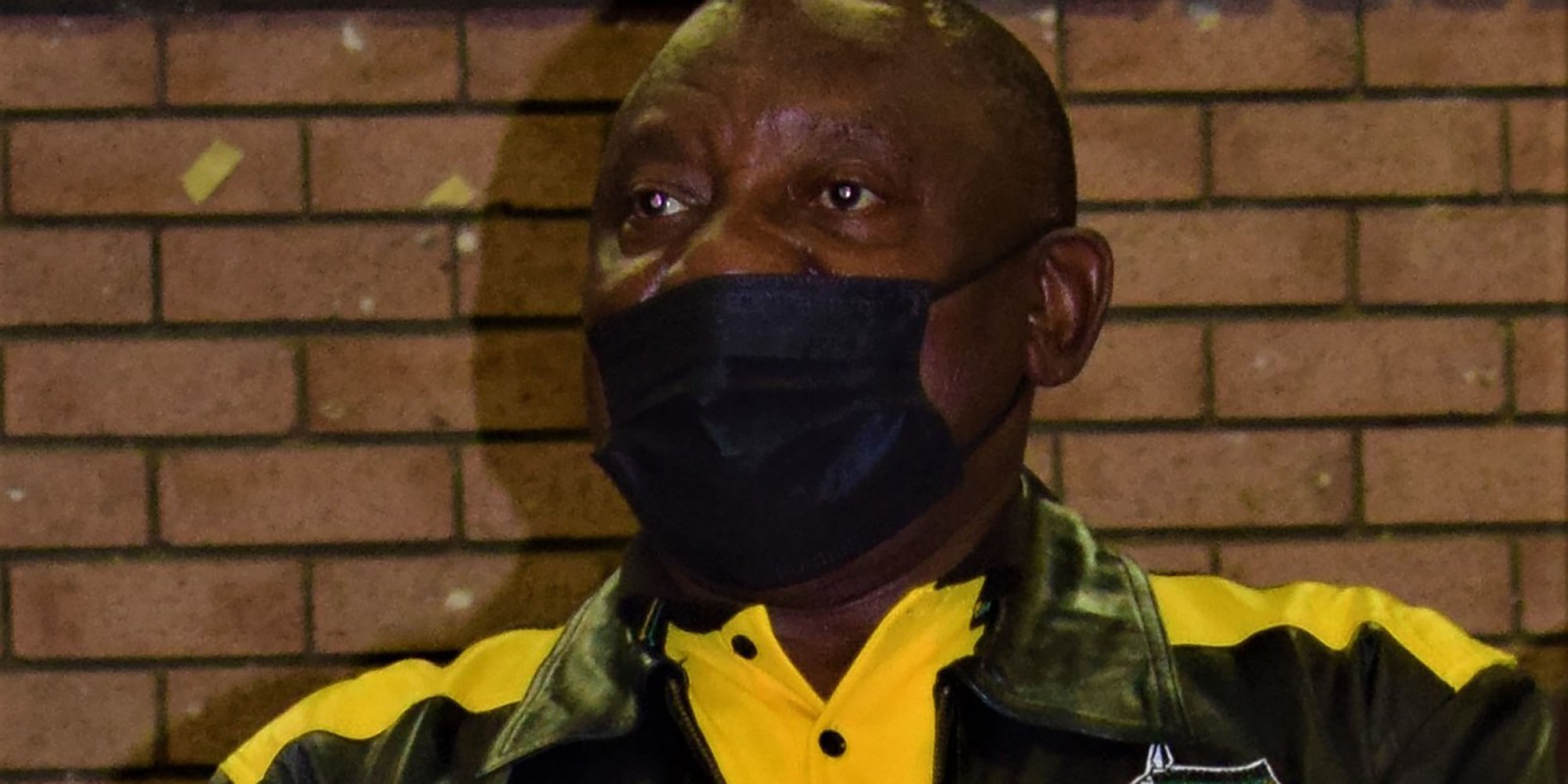 ANC President Cyril Ramaphosa at the ANC’s post-local election event held at the Soweto campus of the University of Johannesburg on 8 November 2021. (Photo: Michelle Banda)

Following a dismal showing in the recent local government elections, the ANC leader returned to Soweto to thank voters and tell supporters that it would not enter into casual coalition agreements.

Still licking its wounds from its loss of support in the local government elections, the ANC leader told supporters at the University of Johannesburg’s Soweto campus on Monday that the party would be cautious about any coalitions.

Addressing a crowd of supporters on Monday afternoon, President Cyril Ramaphosa said the party would not go cap-in-hand to other parties.

“We will be clear that we do not want casual agreements.’’

“They don’t know us too well. We will not turn away from implementing the will of the people. Our people have spoken,’’ he said.

Ramaphosa told supporters that if coalition negotiations failed, legislation would kick in. He said the law would have to be applied if parties failed to establish credible governments.

Speaking to Daily Maverick at the event in Soweto, Gauteng MEC for Community Safety Faith Mazibuko said, “The people have spoken, but it is not that we did not win, we underperformed.”

She said there were many reasons why people had abstained from voting.

She said that on the flip side, the results showed that South Africa’s democracy was maturing.

“We are from a war, we came out of it sweating,” said Mbalula.

He reminded supporters that Ramaphosa’s presidency had encompassed a difficult period because of the Covid-19 pandemic.

Mazibuko said the ANC was hardest hit by the low voter turnout. She said the Women’s League was very disappointed with the outcome of the elections because many women had been on the PR list.

“Wards were predominantly men. A majority of the women were then nominated to be on the PR list. And the low voter turnout automatically affects the PR list. As a result, we will not achieve this 50/50 [gender balance] we have been talking about as the ANC; we will never realise it,” said Mazibuko.

She said the election outcome had disadvantaged many women.

She also said the ANC had to deliver to avoid a repeat of the poor performance. Asked if she meant the ANC had not been delivering, Mazibuko said, “They deliver, but we are saying they must be consistent. We know there are challenges here and there.”

She said what the ANC needed to do now was ask for forgiveness from the people and embark on some introspection.

A staunch ANC supporter who attended the event was 43-year-old Teboho Letsoha from Soweto. Asked what he thought about the party coming to thank the people of Soweto despite the disappointing election results in the township, Letsoha said there was nothing wrong with this.

“The party is thanking those who voted for us,’’ he said.

“The people have spoken… The ANC must now listen.”

Also in the mix was the party’s losing candidate in Eldorado Park, Finley Watson, who was beaten at the polls by a Patriotic Alliance candidate.

“We need to listen to the people to win back their hearts because many feel that we have been a little ignorant,” he said.

Soweto resident Mapule Mbokazi (33), from Chiawelo in Soweto said, “We did the work. We campaigned vigorously for the party even under very difficult and stressful conditions. We have accepted that we have challenges in the party.

“Imagine going on door-to-door campaigns and people everywhere complaining about electricity. The people were cooperating with us, but expressed their anger over electricity.”

Ramaphosa said the ANC National Executive Committee would meet in two weeks to assess the results.

He said provinces and regions should also do the same. The president said one task was the election of mayors, Speakers, and other officials. The party would be holding interviews for these posts.

Ramaphosa stressed that the ANC sought experienced and competent candidates.

The president said the party knew the reasons for its poorest showing in local government elections and said the party would do its best to serve the people of South Africa.

“We know the reasons for the setback. It’s a setback. We are not discouraged because we are not defeated,” said Ramaphosa. DM