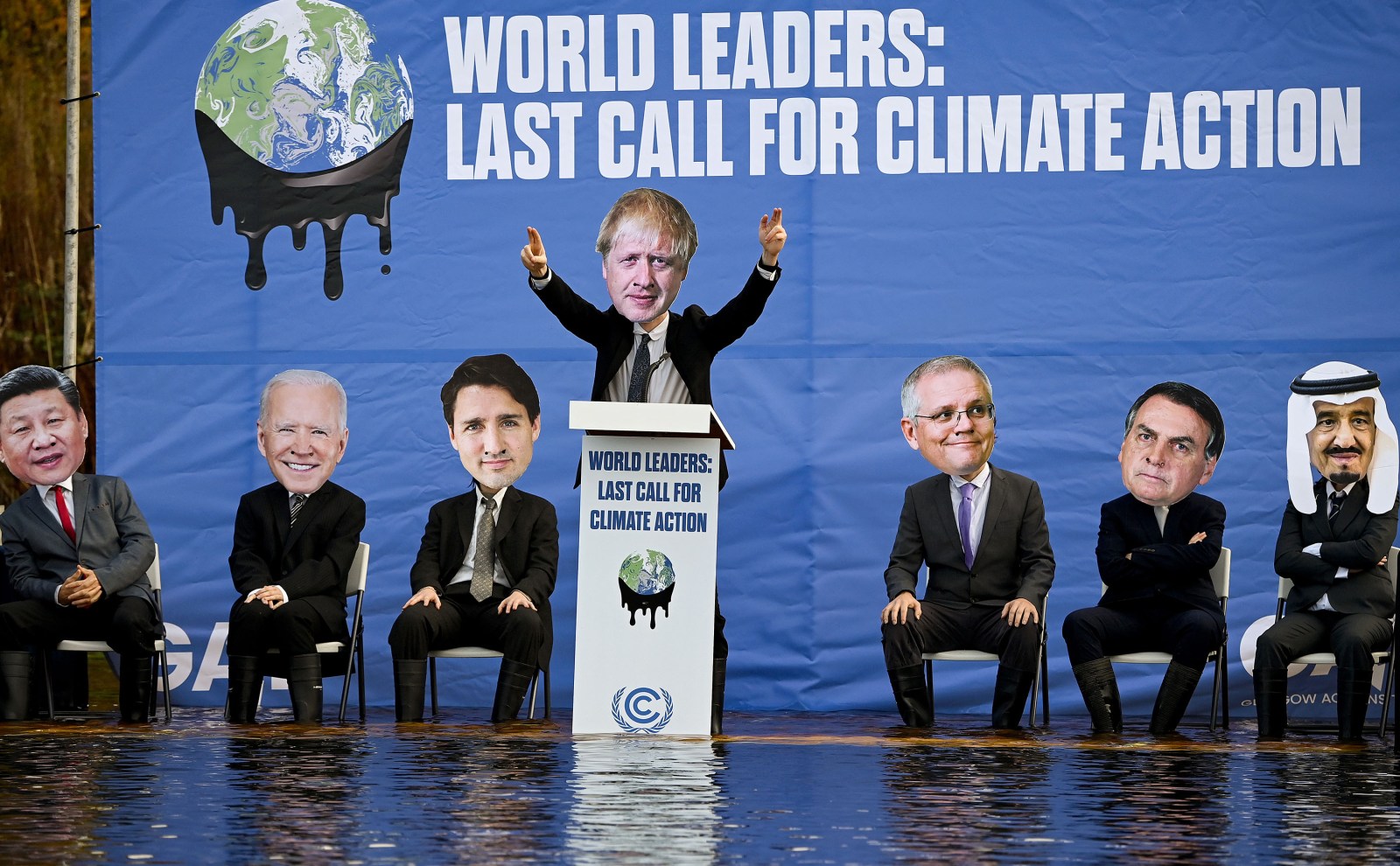 The Glasgow Actions Team activists, dressed as world leaders, sit on a raft in the Forth and Clyde canal on 9 November 2021 in Glasgow, Scotland. As world leaders meet to discuss climate change at the COP26 summit, many climate action groups have taken to the streets to protest for real progress to be made by governments to reduce carbon emissions, clean up the oceans, reduce fossil fuel use and other issues relating to global heating. (Photo: Jeff J Mitchell / Getty Images)

COP26 is nothing but a talk shop and seems to be of no benefit to those most affected, say climate crisis activists.

Climate crisis activists are not convinced that announcements being made at COP26 in Glasgow, Scotland, will have any impact on those most affected and have called on leaders to show a much greater intention to deal with the climate crisis.

The Conference of the Parties (COP) is an annual event where countries (the parties) meet to discuss climate-related issues. The first COP meeting was held in 1995.

Among the news coming out of the ongoing COP26 was that of South Africa securing R131-billion to assist the country in its transition from coal to green energy.

However, climate activists have raised concerns that the conversations about the climate crises are not delivering results.

Liz McDaid, Green Connection strategic lead, said all they had seen of the COP26 meeting was “negotiations and side deals”. She was dubious about whether at the end of the week there will be any difference in terms of how the climate crisis is going to be tackled.

“It seems to be all about the money. So someone can make money out of climate change — that’s the deal on the table.”

She said the R131-billion that South Africa has received from “rich nations” is all loans, not grants.

“Which basically means we have to pay it back and yet, in the most part, it is the rich nations that are responsible for climate change.”

She said that the people whose lives are most affected by the climate crisis, including those on coasts who depend on fishing, are not going to be any better off. Instead, they face diminishing food security.

She believed nothing would change until governments looked at making changes that affected people, instead of signing pieces of paper.

She questioned why oil drilling is still taking place and emphasised that there is no such thing as clean coal.

McDaid warned that the climate crisis would have a negative impact on future generations and that those sitting around the table and making negotiations would not be there to see this.

Awande Buthelezi, a researcher at the Cooperative and Policy Alternative Centre, said: “South Africa is among the leading greenhouse gas emitters in the world and the first in the continent. We want to know how Africa is going to get to a just transition.”

He said many expected COP26 to be a failure, and for him, the only positive news out of it was the financial relief that South Africa had secured to assist the country in its transition from coal.

He said COP had always avoided dealing with systemic issues that were related to the climate crisis and that it was of concern that the agreements made were not legally binding.

Satgar said big carbon emitters such as China, the US and South Africa had excluded themselves from signing the pledge to phase out coal.

He said rich nations continued to have a bearing on the climate crisis in Africa and that countries in the global north refused to acknowledge their role in Africa’s climate crisis problems.

After three decades, world leaders had not shown any real commitment to deal with the climate crisis, he said, calling their attitude “climate imperialism”. DM/OBP