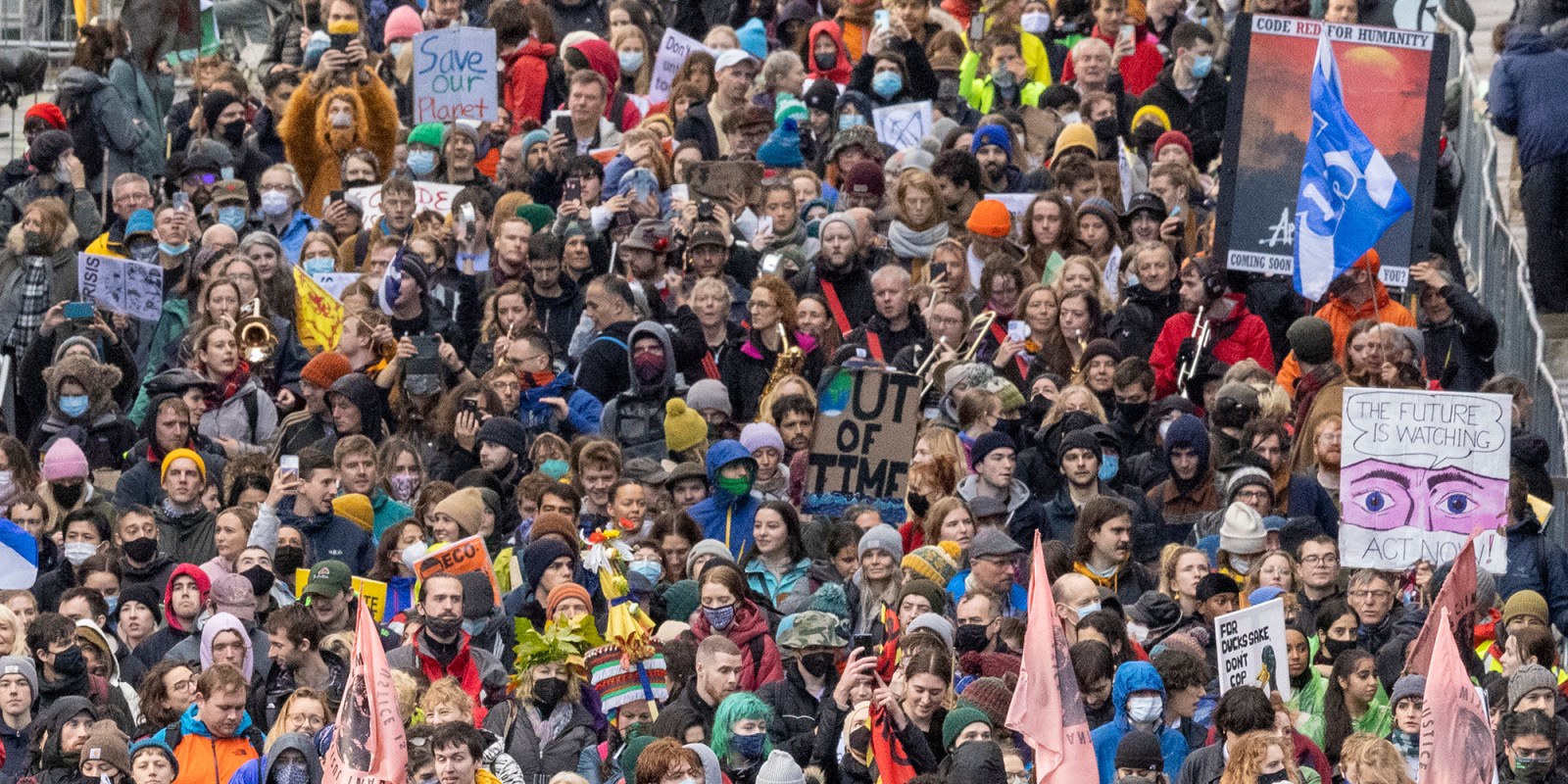 Ongoing COP26 negotiations saw youth climate activists from marginalised communities voice their concerns about how world leaders are tackling the climate crisis, with some expressing their frustrations with the COP26 leadership.

‘World leaders listen! The kids have had enough!” a small group of children aged between four to eight chanted, jumping in dance at the Fridays for Future youth protest in Glasgow, Scotland, where climate crisis negotiations are being held. However, none of the leaders was present to hear the cries expressed by the children while they continued negotiations behind closed doors.

A crowd of thousands of locals and COP26 attendees took to the streets of the Glasgow city centre calling for climate justice and for leaders to take urgent climate action that particularly addressed the needs of the global south.

The protest, targeted at the youth, brought together people of all ages. Babies were pushed in prams with “Please don’t fail me” placards, referring to the global leaders, with older people out in support of climate justice.

Youth activists from several parts of the world and cultural groups spoke at the end point of the protest that had snaked through the city to its final destination at George Square.

Young people from indigenous communities in Latin America took up most of the stage time as they pleaded with world leaders to stop corporations from continuing oil exploration that violated the land and human rights of indigenous communities. Some also called on their presidents to stop being complicit in such actions.

Meanwhile, in the corridors of the Scottish Events Campus where COP26 is taking place, a handful of representatives from indigenous communities were present in their colourful traditional attire, a stark contrast to the besuited attendees who roamed the campus.

People from the global south, who are mainly those of colour, were also disproportionately represented, with many unable to attend because of visa regulations, high costs and vaccine apartheid that has seen developing countries struggle to gain access to vaccines.

Ayakha Melithafa (19), a South African climate justice activist for the African Climate Alliance and a youth and civil representative for the Presidential Climate Commission, told Daily Maverick that the protest was the biggest she had attended.

She said, however, that it was disappointing that the media was pushing a “white saviourism” agenda, by only capturing the voice of Swedish youth climate justice activist Greta Thunberg.

“As the global south, we are living through [the climate crisis] every single day. No one can explain our stories better than us. So it’s quite important that the global south be at these protests, be at COP26 in order for us to share these stories and make people understand the pain and the hurt; the true life-or-death situation that we are in.

“For us [the climate crisis] is not theoretical, we are living through it and future generations are going to suffer. We are suffering because of the inaction and slow, slow progress that is being made,” Melithafa said.

On the day of the protest, COP26 President Alok Sharma urged ministers to consider youth priorities in COP26 negotiations and national climate action.

“Wherever I have been in the world, I have been struck by the passion and the commitment of young people to climate action. The voices of young people must be heard and reflected in these negotiations here at COP. The actions and scrutiny of young people are key to us keeping [a global temperature rise capped at] 1.5 [degrees Centigrade] alive and creating a net-zero future,” Sharma said.

While Friday was branded Youth Day and saw many young people taking to the streets to voice their concerns, COP26 leaders opted to continue the week of “ambitious” pledges that lacked clarity regarding implementation.

The organisation announced a draft sustainability and climate change strategy to equip and empower young people with the skills they need to drive the future of climate action.

In addition, Sharma and Roberto Cingolani, the Italian Minister of Ecological Transition, discussed the manifesto developed by 400 people at a pre-COP summit for the youth in Milan, Italy. In the manifesto, young people called for inclusive participation and increased climate support and funding.

Raeesah Noor-Mahomed (19), a South African intersectional activist with several organisations, told Daily Maverick she had attended Friday’s protest because it was important for any marginalised person to show up at it.

“COP is so exclusionary… so many people were excluded and left behind. There’s been criticism with people calling for the global south to boycott COP26, but I feel like we are not at that point where we can do that yet. Because, if we boycott COP all that will happen is that COP is free to be exclusionary and make decisions on behalf of us,” Noor-Mahomed said.

Expected to be one of the most ambitious COP meetings yet, the first week saw countries make pledges that could help to lower global emissions. However, the announcements, which took place outside of the formal negotiations between countries, have been deemed a separate occurrence from the main purpose of the conference: countries formally agreeing on the COP26 agenda.

She said money used to accommodate and transport politicians could be used to combat climate crisis consequences in marginalised communities. DM/OBP