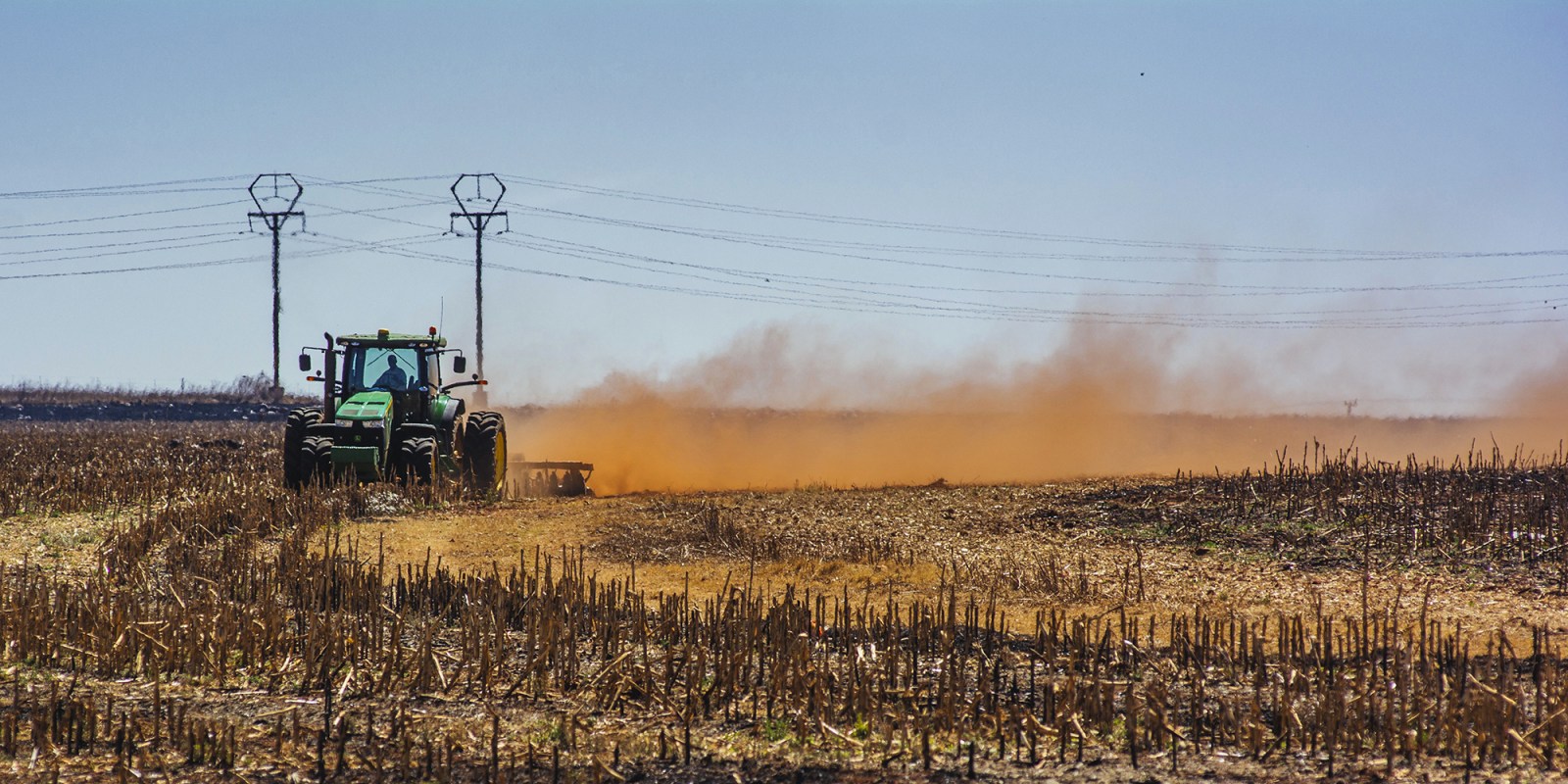 A tractor ploughs ground through a harvested cornfield outside Delmas in the Mpumalanga province, South Africa on September 13, 2018. Rising costs are placing farmers and consumers under increasing pressure. (Photo: Waldo Swiegers/Bloomberg via Getty Images)

The agricultural sector is not in an entirely flowery state. Rising input costs for all farmers will squeeze profit margins in the 2021/2022 period but this is largely due to international trends and there is limited scope for South Africa to influence the cost of inputs.

The dominant message about South Africa’s agriculture in the past few months has been of a thriving sector, having grown by 13.4% year on year in 2020 and expected to grow a further 7.6% in 2021. The large harvests of 2020 improved farmers’ finances and allowed some to replace old machinery. Tractor and combine harvester sales expanded by double digits in many months after mid-2020.

Yet, this is not a complete picture of the financial conditions in this sector. Rising input costs — higher fuel, labour, fertiliser, energy and agrochemical costs for those in field crops and horticulture — are squeezing producers and calls have been made for some sort of intervention.

The challenge, however, is that South Africa has very limited control as many of these issues are driven by international events over which South Africa has very little influence. By investigating the factors that weigh on the cost of inputs, we see that there is little policy space to effect a change and these must also be carefully considered.

Regarding direct input products, herbicides such as glyphosate, atrazine and metolachlor, prices were up by 99%, 33% and 32% respectively in September. The same trend persists in major fertilisers such as ammonium nitrate, urea and potassium chloride, the prices of which were up 107%, 58% and 125% respectively.

These increases are caused by supply constraints and disruptions in production lines in major global fertiliser and agrochemical producing countries such as China, India, the US, Russia and Canada. Rising shipping costs and oil prices have also been contributing factors, with firmer global demand from an expanding agricultural sector.

Domestically, supply constraints have been an issue due to a series of unfortunate events affecting our seaports. The unrest in KwaZulu-Natal and parts of Gauteng caused disruptions, as have recent fires and the cyber-attack aimed at Transnet earlier in the year. Unfortunately, these setbacks may be a contributing factor but plans were quickly put in place which should bode well for the summer production season.

These headwinds are beyond the domestic industry’s control. SA imports about 80% of its annual fertiliser consumption and is a minor player globally, accounting for a mere 0.5%. Much of the fertiliser imported by SA is used in maize production, which accounts for 41% of consumption, the second-largest consumer being sugar cane at 18%. Fertiliser constitutes about 35% of grain farmers’ input costs and a substantial share in other agricultural commodities and crops.

From 3 November, there were additional costs to farmers through rising fuel prices, with petrol and diesel rising by R1.21/l and R1.48/l respectively. Fuel generally accounts for 11%-13% of grain and oilseed production costs. Fuel consumption is usually moderate throughout the year, with the highest periods during planting and harvesting, and we are in the planting phase. In terms of annual fuel usage, SA transports about 81% of maize, 76% of wheat and 69% of soya beans by road. On average, 75% of national grains and oilseeds are transported by road.

Fuel prices in South Africa are determined largely by global crude oil prices and domestic taxes. The key factors sustaining fuel prices at these higher levels are the somewhat weaker rand-dollar exchange rate combined with rising crude oil prices. As far as our domestic taxes are concerned, just over R6 per litre goes towards taxes. The two biggest taxes are the fuel levy and the Road Accident Fund levy, which is paid out as compensation when persons are injured in a road accident.

Theoretically, South Africa could cut down on these taxes to reduce the price that consumers pay but there are two major obstacles. Firstly, it would severely affect the state’s income stream and taxes may well need to be raised elsewhere to compensate for the loss or to raise revenue for the Road Accident Fund. The second element — and this is crucial — is that farmers can already claim back up to 80% of these taxes through SARS’ diesel rebate scheme. The total cost of fuel taxes will still have a cumulative impact on the agro-logistics chain but a rebate can be claimed where diesel is consumed for on-farm activities such as planting and harvesting.

Electricity prices have also increased by double digits this year which will further place strain on producers and the value chain. Electricity prices are approved by the National Energy Regulator South Africa (Nersa) based on applications received by Eskom and after considering public hearings. Our prices are therefore determined domestically but in truth, there is little wiggle room without compromising Eskom’s ability to implement its turnaround strategy. This is not a once-off and electricity prices are likely to continue climbing in the medium term. With the threshold for self-generation now lifted to 100MW, it may well be worth it for the sector to invest in renewable energy generation and decouple itself from rising energy costs as far as possible.

Finally, labour can also be seen as an input cost and accounts for a significant percentage of costs within the horticultural sub-sector in particular. Since 2019, labour costs have been regulated by the National Minimum Wage Act. To ensure the competitiveness of the agricultural sector, agricultural workers started at 80% of the national average intending to equalise their wages within three years.

In March 2021, the national minimum wage was increased by 4.5% year-on-year. However, on the back of robust growth in the agricultural sector in 2020, the regulator seized the opportunity to equalise agricultural workers’ pay with that of the rest of the economy, resulting in a real increase of 16.1%.

This was undeniably another spike for input costs and one which falls within South Africa’s ability to influence, but care must be taken when doing so. Now that equalisation has taken place, the wages in the agricultural sector will adjust at the same rate as the rest of the economy. A double-digit increase is therefore unlikely in the near future. That being said, agricultural wages are not higher than comparative economies and the Fourth Industrial Revolution may change the type of skills needed by the sector.

Finally, there is a very real link between wages and human dignity so while labour is undeniably an input cost, care should be taken not to view it as merely a cost item since it directly affects the livelihoods of farming communities.

Overall, the agricultural sector is not in an entirely flowery state. Rising input costs for all farmers will squeeze profit margins in the 2021/2022 period but this is largely due to international trends and there is limited scope for South Africa to influence the cost of inputs. For those that we can influence, care should be taken with policy decisions as there will undoubtedly be unintended consequences.

The only saving grace for those in field crops and horticulture would be if global commodity prices remain elevated as expected, though possibly lower than the levels at the start of 2021. All this should not be too great a concern for consumers in the near term because farmers are price-takers and cannot necessarily pass on costs to consumers, especially crop farmers. However, the story could be slightly different for poultry and livestock markets. DM

Wandile Sihlobo is chief economist of the Agricultural Business Chamber of South Africa (Agbiz). Theo Boshoff is Head of Legal Intelligence at Agbiz.