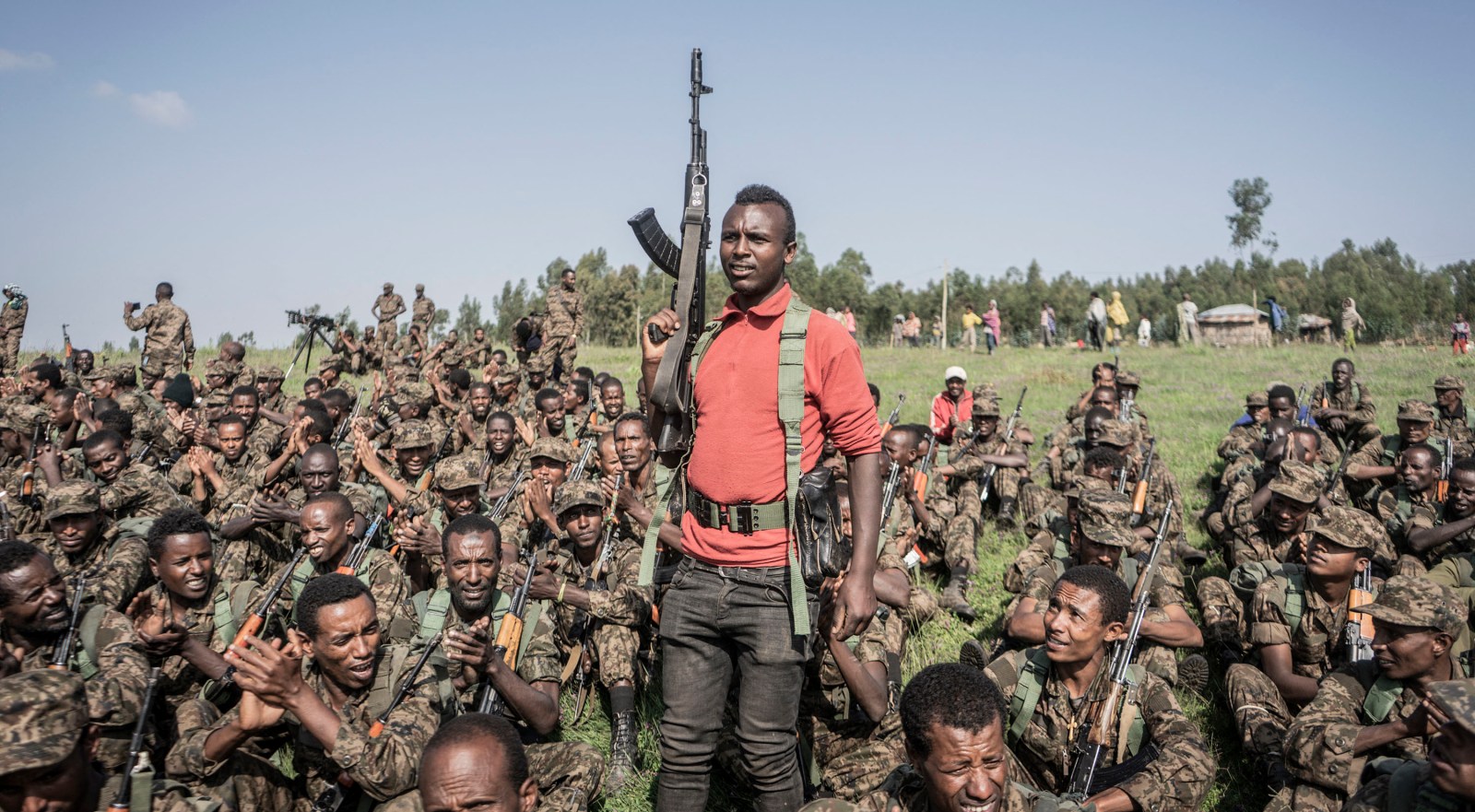 A soldier from Ethiopian National Defence Forces (ENDF) gestures during a training session in the field of Dabat, 70 kilometers Northeast of the city of Gondar, Ethiopia, on September 15, 2021. (Photo by Amanuel Sileshi / AFP)

Frantic peace efforts are being rebuffed by both sides in the year-long civil war.

Foreign governments this week urged their citizens not to travel to Ethiopia and to escape the country as soon as possible if they were there, as Tigrayan rebel forces advanced rapidly on the capital, Addis Ababa. Some countries began evacuating their diplomats.

Rumours intensified that the city could fall within days or even hours, bringing to a dramatic and possibly even deadlier close an already bloody civil war between the federal government and the Tigray People’s Liberation Front (TPLF), which has raged for just on a year as at 3 November.

Desperate but defiant, Prime Minister Abiy Ahmed – ironically the winner of the 2019 Nobel Peace Prize – fobbed off peace envoys, declared a state of emergency and urged residents of the capital to arm themselves to repel the Tigrayan forces if they reached the city – an implicit acknowledgment that his own Ethiopian National Defence Force (ENDF) was not up to the challenge of defending the capital.

The US bluntly advised its nationals: “Do not travel to Ethiopia due to armed conflict…” and gave its nonemergency officials permission to leave. Its practical advice to those US citizens who opted to remain included “draft a will” and “leave DNA samples with your medical provider…” The UK and other governments also advised their nationals to get out or not to visit.

But Ethiopia’s ambassador to South Africa, Shiferaw Menbacho, speaking from Addis Ababa, contemptuously dismissed the rumours of an imminent fall of the capital. “The empty wish declares the final burial ceremony of the rebel group,” he said.

The ENDF had marched triumphantly into Ethiopia’s northern Tigray province in November last year and captured the provincial capital Mekelle from rebelling TPLF forces – with the important support of the invading Eritrean Defence Force. Abiy intended a brief war to restore federal authority. But the TPLF retreated to the mountains and fought back. And over the past few months, now allied with the Oromo Liberation Army (OLA) from Abiy’s own province, Oromia, it has dramatically turned the tide of war, driving the Ethiopians and Eritreans back and advancing to within 300km of Addis Ababa.

Diplomatic efforts to establish a ceasefire seem to be failing as both sides still seem to believe they can win the war. The African Union’s special envoy, former Nigerian president Olusegun Obasanjo, and US President Joe Biden’s special envoy for the Horn of Africa, Jeffrey Feltman, are in Addis Ababa, urging peace. Obasanjo declined DM168’s request for comment on his progress.

This week Feltman told journalists in a phone briefing from Washington that: “Without question the situation is getting worse, and we’re – frankly, alarmed by the situation… There has been insufficient access to Tigray since late June, early July.” He said the UN estimated that only about 13% of humanitarian needs to the federal state of Tigray have been met. There were several reasons for that, including the fighting. “But it’s mostly government restrictions … that have prevented the type of humanitarian access from getting to the people of Tigray, and we see signs of famine and near-famine conditions.

“There are over five million people in conditions of food insecurity now whose needs could be addressed if the government would allow the assistance to flow. And at the same time, you see the TPLF … has moved out of Tigray, south into Amhara, [has] taken strategic cities of Dessie and Kombolcha…

“So we’re calling on all parties to this conflict to find ways to de-escalate the situation, allow the humanitarian access to flow to those in need … and move toward a negotiated ceasefire. The situation is dire, and as I said, it is getting worse…”

Will Davison, Ethiopia expert at the International Crisis Group (ICG), told DM168 that he thought Addis Ababa was more likely to fall within a few weeks rather than a few days, as he believed the Tigrayan forces would first try to capture the corridor from Addis Ababa to Djibouti, Ethiopia’s vital access to the sea. “But who knows? Things are moving very fast these days,” he added.

Davison emphasised that such chances as there were, at this late stage, of stopping the Tigrayan advance on Addis Ababa depended on Abiy’s federal government making some concessions to the Tigrayans.

The most important concession would be to end the blockade on Tigray. “So the restoration of services, banking and telecommunications, electricity. And the facilitation of aid to alleviate humanitarian conditions. That would by no means solve all the problems. But it could be a way to get some initial cooperation by the Tigray leadership to stop their advance, particularly its advance towards Addis Ababa.”

But Davison suggested Feltman and Obasanjo faced an uphill struggle.

It wasn’t helpful for the US simply to call on the Tigrayans to halt their advance, as Washington did last weekend. “That’s not going to have any effect.”

On the other hand, there were no signs that Abiy and his allies were ready to make the kind of concessions to the Tigrayans he believed were necessary to persuade them to stop their advance.

Abiy’s call on Addis Ababa residents to take up arms could be very bloody for civilians – if the call was answered, which Davison was not sure would happen. Though there was clearly a lot of opposition to the TPLF and the OLA, it was not clear that it would translate into effective popular resistance in Addis Ababa.

And even if it did, the Tigrayans had simply rolled over popular resistance before and kept on advancing.

“But there is a real concern about attacks on Tigrayan civilians in Addis and in other cities… There is also likely to be considerable rebellious activity in Amhara region should the Tigrayan forces and the OLA take control of Addis as well,” said Davison.

They were aiming to capture Addis Ababa not essentially to run Ethiopia but to secure Tigray’s interests as they saw them. This meant resuming the flow of trade, services and aid to Tigray and having a federal military that did not threaten them.

And the Tigrayans also needed to conduct a referendum on Tigray’s independence.

“So their dilemma is how do they secure their interests without exerting considerable federal power in Addis. It’s not really conceivable…”

The Tigrayans would need to avoid looking as though they were repeating Ethiopia’s post-1991 politics which the TPLF dominated after its dominant role in the revolution which toppled the brutal regime of President Hailemariam Mengistu.  The victors put in place an ethnic-regional federation that kept the country together for over two decades. It was Abiy’s efforts to unravel that ethnic-regional federation and centralise power that sparked the conflict with the TPLF.

Davison said, if one assumed regime change was really coming, there now needed to be some urgent deal-making among the opposition actors allied against Abiy’s government. These needed to include an Oromo-led transition that respected Oromo interests but also secured Tigrayan interests.

“That’s a very, very difficult political balancing act. There’s not much time and obviously, there’s all sorts of other risks – the popular resistance, the possibility of attacks against Tigrayan civilians, a rebellious Amhara region. So it’s a pretty nasty cocktail basically.” DM168