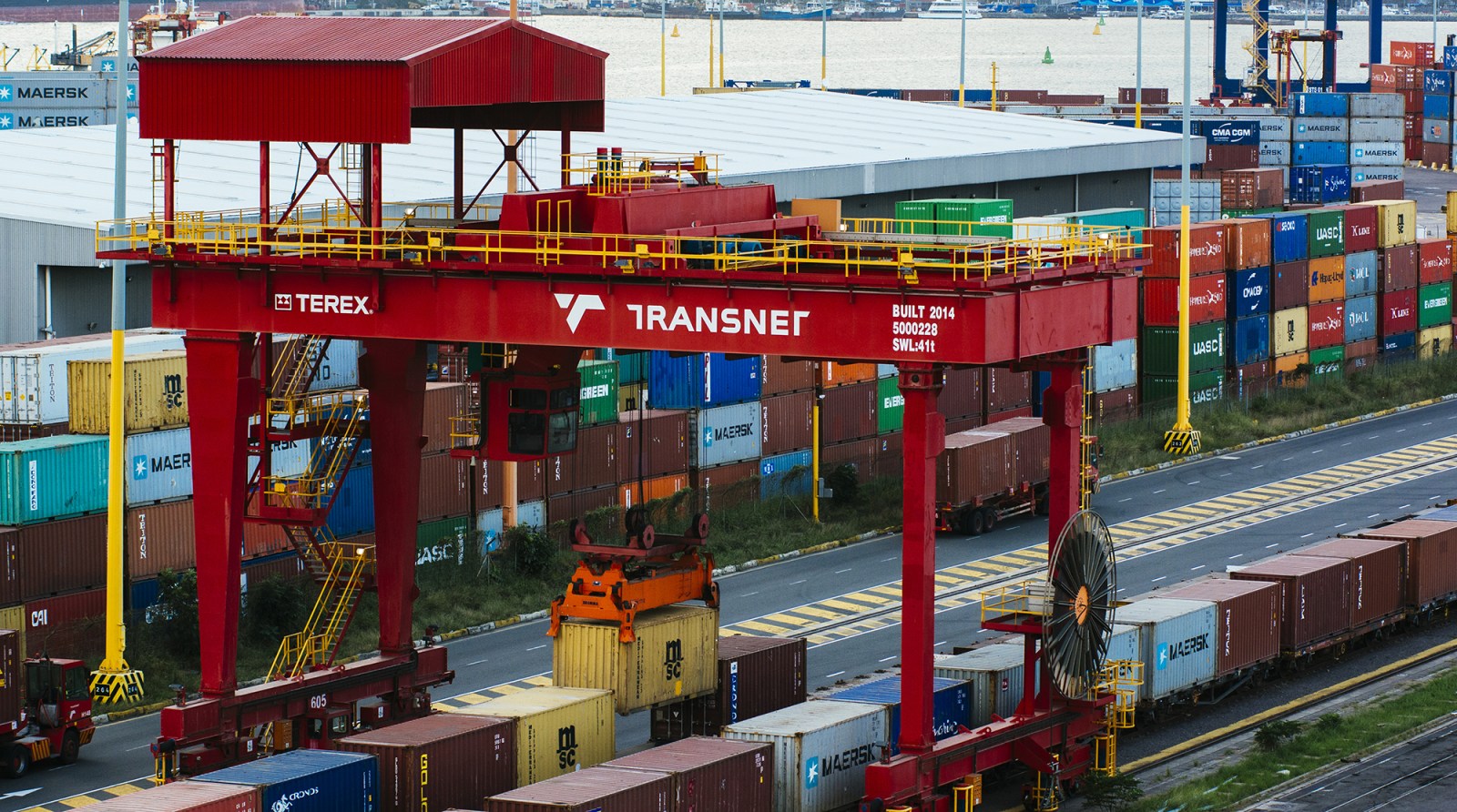 A rail-mounted gantry crane lifts a shipping container from the dockside at the Port of Durban, operated by Transnet’s Ports Authority. (Photo: Waldo Swiegers / Bloomberg via Getty Images)

An eleventh-hour marathon discussion among Transnet, the Treasury and the Auditor-General only delayed the inevitable: A qualified audit opinion which places the state-owned logistics company in breach of some covenants with lenders. Moody’s has added to the pressure by lowering the company’s corporate family rating.

On a not-so-ordinary spring afternoon in Gauteng last Friday, as the clock struck 30 past noon, an air of anticipation among journalists filled a virtual meeting of Transnet’s long-awaited results presentation for the year ended 31 March 2021.

In the sweltering heat and the humdrum of load shedding, a 30-minute delay turned into a three-and-a-half-hour wait. Transnet executives’ marathon pre-AGM deliberations with the National Treasury and the Auditor-General on matters relating to compliance with the Public Finance Management Act (PFMA) did not yield the desired outcome.

Irregular expenditure, which predates the current board and executives, and remained unaccounted for in financial periods prior, was pinpointed as the main culprit. In conducting its external audit of Transnet, the Auditor-General went through a painstaking process aligned primarily with the provisions, and accompanying regulations, of the PFMA and the Companies Act, and in accordance with the Public Audit Act.

The Auditor-General has made an assessment to the effect that “payments made in contravention of… supply chain management requirements resulted in irregular expenditure that was not always identified and reported on”.

Although the irregular expenditure was not incurred under the watch of the current incumbents, they as a collective with the board constitute the accounting authority of the company. Therefore, they bear responsibility to rectify the deficiencies identified and are the ones facing the proverbial music.

During the eventual results’ presentation last Friday, the disappointment and exasperation among Transnet’s top brass were palpable despite their best efforts to put on a brave face. “We do face a breach on covenants,” admitted Transnet group CEO Portia Derby, adding, “it’s an effort to deal with those covenants.”

Moody’s is of the view that the company’s inability to secure unqualified audit opinions raises the risk of uncertainty around Transnet’s ability to access international capital markets “in a timely manner ahead of a $1bn international bond maturity in July 2022 [which was fully cross-currency hedged at the time of issuance].”

The agency has kept the logistics company’s outlook negative “because liquidity pressure will continue to intensify unless Transnet raises a substantial amount of new long-term financing in the coming months”.

“As a company we need… to be back in the markets as quickly as possible and raise the funds that we require. To a large extent … we are trying to focus on the investment activities that we have to undertake to ensure we deliver the services that we must to the economy,” said Derby.

Group CFO Nonkululeko Dlamini readily conceded that “if Transnet has a qualification, it is one of the covenants we have with the lenders”.

Before the results were released Transnet had already begun discussions with its lenders about an audit qualification. Now, the company will take those engagements further and “we believe we will be able to close out the discussion with the lenders,” said Dlamini.

“Our financial statements are not qualified as a result of IFRS transgressions. … [It is] a disclosure matter largely driven by the history of Transnet and what we call legacy,” noted Dlamini. “We are optimistic that, through the engagement, we will be able to unlock and get the waivers for where we are now.”

In the next week or so, Transnet could release another SENS announcement pertaining to the issue of the qualified audit opinion, said Derby.

What does stand the logistics company in good stead is that there is a remedial plan on the table in terms of which it aims to address its PFMA compliance shortcomings. Furthermore, Transnet has previously obtained waivers from its lenders.

Moody’s notes that the company “maintains good relationships with its bank lenders, who … [the rating agency] understands remain supportive”.

Another positive for Transnet, according to Moody’s, is that the parastatal continues to be proactive in its work on a funding plan. Moody’s has faith the company will be able to secure financing commitments that will allow it to meet obligations due until September 2022. But “as sizeable maturities draw closer without refinancing secured, the risk of default increases”. BM/DM