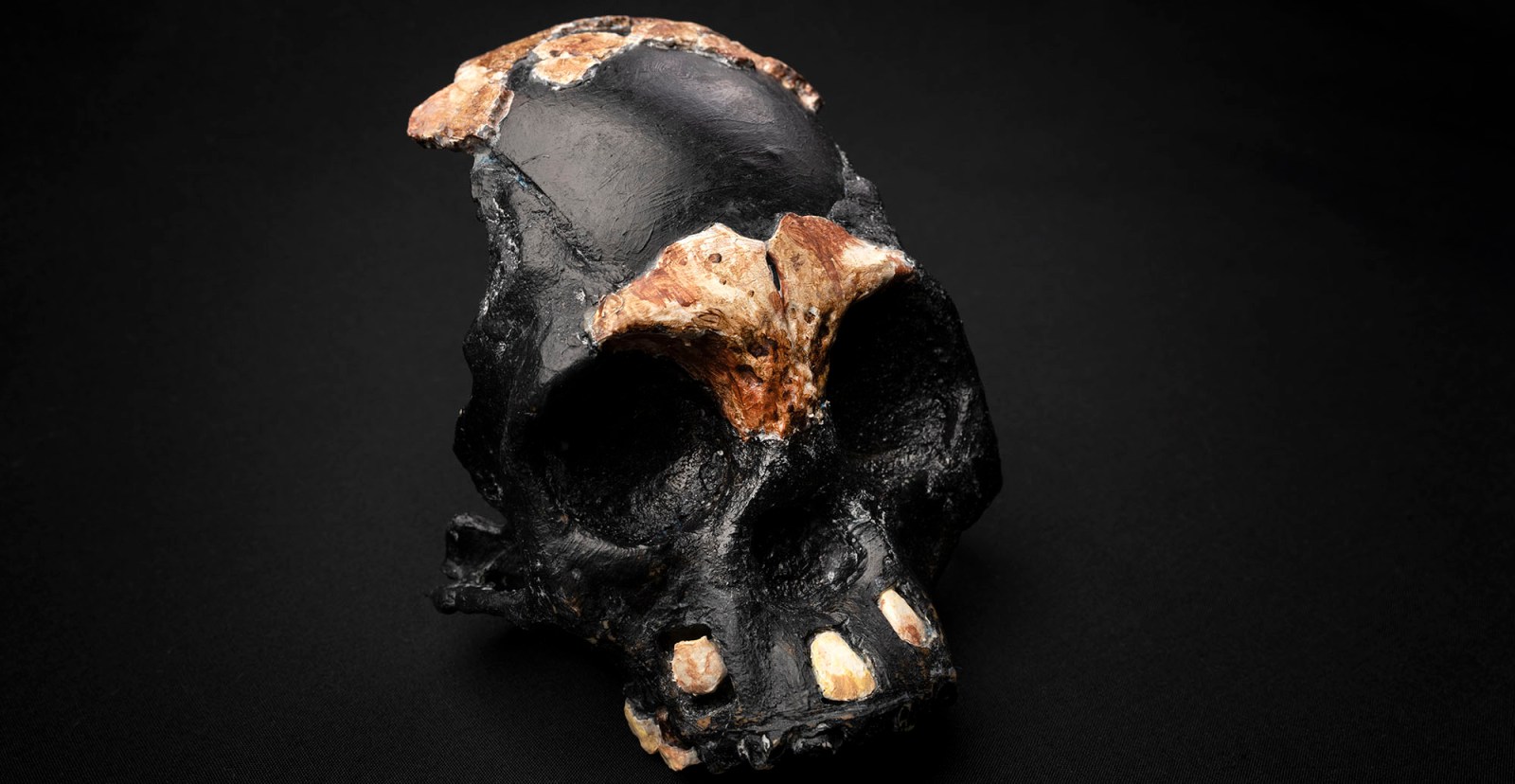 The first partial skull of a Homo naledi child that was found in the remote depths of the Rising Star cave. (Photo: Supplied)

On a small ledge deep in a cave, an intriguing discovery has bolstered a theory that we were not the only species on the African landscape ritually burying their dead.

A team of researchers on Thursday announced that they had found the partial remains of the skull of a juvenile Homo naledi in a difficult-to-reach part of the Rising Star Cave system in the Cradle of Humankind.

Getting to this part of the cave would have been a daunting task, that would have been made in pitch blackness. There is no reason why the child would have been there, so the team hypothesised that the skull was placed there by members of its own species. As no other bones were found at the site, they further suggest that just the head or skull was left there, around a quarter of a million years ago.

The researchers announced this discovery on Thursday at the Malapa Museum, at the Cradle of Humankind. The skull, that of a child believed to be between four and six years old with both baby and adult teeth erupting, has been named “Letimela” or Leti meaning “the lost one” in Setswana.

“But the big question, that is immensely valuable to science, is how did it get there. And I’m sorry to tell you, we have no idea,” said Professor Lee Berger, project leader and Director of the Centre for Exploration of the Deep Human Journey at Wits University.

“It is difficult to imagine how that skull was transported back there other than by another member of its own species at some time.”

The team’s findings were published in two separate academic papers that appeared in the Open Access journal, PaleoAnthropology.

Speaking at the press conference, one of the co-authors of the study, Dr Darryl de Ruiter, explained that they had eliminated other forces that might have been responsible for the movement of Leti or other Homo naledi specimens into the cave.

“So we examined all of the Naledi bones that we found throughout the system and there is no indication of any carnivore activity, no tooth marks, or gnawing marks,” he said. “There is no indication that large-scale water movement deposited these things. So by eliminating these other potential explanations, we begin to focus ever closer on the intentional behaviour behind this.”

The hypothesis that our small-brained human relative was burying its dead 240 to 335 thousand years ago, is not new. Since its discovery in 2013, Homo naledi has been a mystery to those studying it. That was back when recreational cavers Rick Hunter and Steven Tucker found a number of fossils in a chamber that was to become known as the Dinaledi Chamber.

They alerted Berger to the find.

As the chamber is 80 metres from the entrance to the Rising Star Cave, and there is no other apparent way into Dinaledi, Berger and his colleagues then suggested that the newly discovered hominin might have been disposing of their dead by taking them into the cave.

One of the skeletons later named Neo was also found in a small enclave, and the team wondered if it had also been placed there.

Leti was found just beyond an area that has been named the Chaos chamber. Getting to Leti required moving through a tight passage measuring only 15cm wide and 80cm long. Excavating the bones had one of the team, Becca Peixotto, almost working upside down.

Homo naledi might have found it easier to get there, because they were probably better climbers than humans. Explaining moving in complete darkness is the problem; however, the team found something that points to naledi perhaps using technology — pieces of charcoal.

“It is nothing that we have been able to firmly associate with these hominins. But it wouldn’t be surprising if, at 241,000 to 335,000 years ago, these guys were using fire, and were using some sort of torches to move around to the cave,” said Dr Steve Churchill, a palaeoanthropologist and co-author on both papers.

Leti hasn’t been dated yet, but initial dating of the cave has established a date of between 335 and 241 thousand years ago, and Tebogo Makhubela, who is part of the geological team investigating the discovery, believes that Leti is from the same period. It is a time period when humans were already on the landscape, but whether they interacted with Homo naledi is not known, as human fossils or artefacts haven’t been found at the site. There is also no evidence, say the team, that humans were involved in moving the naledi remains into the cave.

But not everyone is convinced that homo naledi was practising some form of burial ritual. Palaeoanthropologist Professor Chris Stringer of the Natural History Museum in London believes that there might be other causes that led to those Homo naledi ending up in the cave.

“I have argued that they might have fallen down the chute and weren’t able to get back, and ended up wandering around down there,” said Stringer, who wasn’t part of the study. “They may be fleeing from a predator or some other individuals.” The remains of two baboons have also been found deep in the cave system.

He also believes that if Homo naledi was using fire to light its way, there would be more evidence for it:

“When you go into the painted caves in France and Spain, you find quite a lot of charcoal around and you find soot and smoke traces on the walls. If they are there, I would find that more impressive.”

“Right from the very beginning, they were proposing a deliberate depositional model which now appears to be supported.”

But while this might be further proof of a species besides ourselves burying their dead, the discovery of a child’s remains from that period in prehistory is very rare. Even adult human remains from the period are hard to come by, and because babies have more fragile bones, they don’t appear in the fossil record. Usually, it is just their teeth that are found.

“This is the first partial skull of a child of Homo naledi yet recovered and this begins to give us insight into all stages of life of this remarkable species,” said Professor Juliet Brophy, who led the study on Leti’s skull and dentition.

Leti is likely to provide more insight into how our nearest relatives grew up. There is even the possibility that in the future DNA might be extracted, revealing just how closely related homo naledi is to us. But in the meantime, more research is planned in the Rising Star Cave that might just answer those mysteries associated with one of our newest members of the family tree. DM