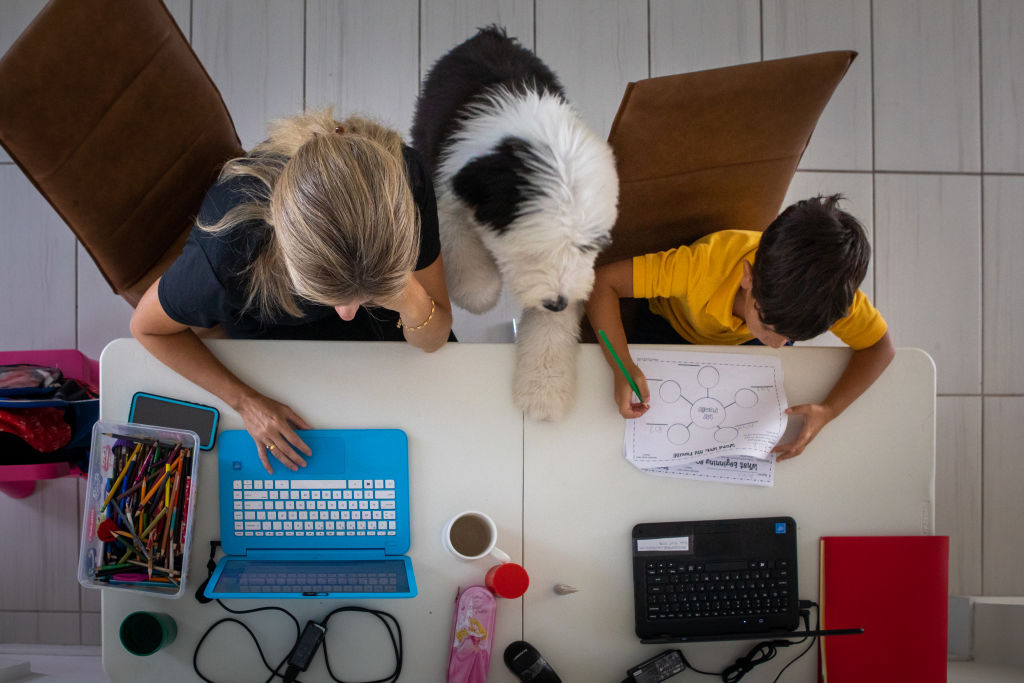 A mother working from home sits alongside her son attending school remotely in an arranged photograph taken in Miami, Florida, U.S., on Tuesday, Sept. 8, 2020. Tens of thousands of students and teachers haven't been able to access K12's My School Online platform this week. Miami-Dade public school revealed Wednesday that the district never signed a $15.3m no-bid contract with K12 Inc., the company at the center of the "unprecedented crisis," according to a Miami Herald report. Photographer: Jayme Gershen/Bloomberg via Getty Images

Academic guilt is well-established in literature on the work of women scholars who are simultaneously mothers and lecturers, homemakers and researchers, nurturers and administrators. It’s a sense of not being able to cope with conflicting demands on one’s time and is often accompanied by negative self-judgement.

In South Africa and around the world, women academics had to confront this challenge of multiple roles even more intensely when the COVID-19 pandemic forced them to work at home.

In our study, women recounted their experiences across the various stages from “hard” lockdown from 23 March 2020, to the gradual easing of the lockdown through the end of September 2020. During all of these stages universities were closed for face-to-face teaching. Only minor exceptions were made where institutions granted permission for some professional fields such as medical students’ practical work and laboratory work.

The guilt of academics caught up in the struggles of work-life balance is certainly not new, but when “COVID happened”, three things were different:

Our national study is the first comprehensive analysis of “academic guilt” in South Africa. In a survey, we asked more than 2,000 academic women from 26 public universities about their experiences and feelings of academic guilt during the pandemic.

We found that the escalating volume of academic work (teaching, research, administration and student support) alongside increasing domestic commitments placed women in situations they described as “overwhelming” and “unbearable”. Our study shows that higher education institutions need to strengthen efforts to retain women academics and avoid sidelining them. Improved workplace policies and flexibility in working arrangements should be considered, particularly when office and home converge.

Despite major shifts in conceptions of gender roles in work and family life, traditional expectations that a woman’s primary responsibility should involve caring for children and family still create stress for working mothers. This is not to say that men don’t experience conflict about the competing demands of their work and home lives, but recent studies show that women have significantly higher levels of guilt related to their work interfering with family responsibilities relative to males. This is why we opted to present the opportunity for them to express their views.

We found that for working women with children, the pressure of several competing roles created a sense of guilt. These roles included some or all of the following:

Some respondents also felt bad about getting paid regularly when those closest to them had lost their jobs. And some felt they “should be able to do their work” even when they were not emotionally in a good space.

Respondents acknowledged that adopting practices to survive, such as resorting to “putting the television on as a means of babysitting”, came at a cost. They did this because work pressure gave them little choice.

For some, the guilt-inducing conflict wasn’t just between work and family. Women academics were also torn between the two primary university obligations; teaching and research.

The research project showed that changing to online teaching affected the respondents’ ability to focus on their research, which is a major consideration for promotion in academia. Women academics questioned their productivity. And the pressure is on at South African universities to become “research intensive”.

The emotion of guilt was also expressed relationally – that is, in comparison to those (men) who do better in their academic work because of an advantage perceived to be unfair. Several participants mentioned the uninterrupted productivity of men over the lockdown period. In many households, traditional gendered roles were exposed. Women who weren’t able to fulfil a nurturing role during “family time” felt guilty.

But it was the ever-present demands of family life that generated much of the guilt felt by academic women. Sometimes, the tugs and cries of a child when a mother turned attention to her work became overwhelming. Working from home and performing multiple roles highlighted a constant guilt which has personal health consequences.

Our research shows that guilt is common, constant and consequential for academic women. The study concludes that academic guilt persists between the two primary tensions of academic work and family care. Universities therefore should review their working from home policies. Institutions also need to pay particular attention to the support available for the health and well-being of employees.

If universities plan to continue with working from home policies indefinitely, they need to be aware of the unintended consequences and impact these have on women academics and academics more broadly.

Future research should address this by exploring alternative models of flexible work adopted by other institutions during the lockdown, to identify best practices. Such studies should incorporate the experiences of both men and women with young children.

Another variable that has a bearing on this exploration is the career stage of academics. The combination of changing professional demands and changing life demands might create the need for different policies at different career stages.

Ultimately this body of research, and the policies of institutions more broadly, should focus on creating working environments where women academics can be dedicated researchers and educators, without any associated guilt. DM/ML