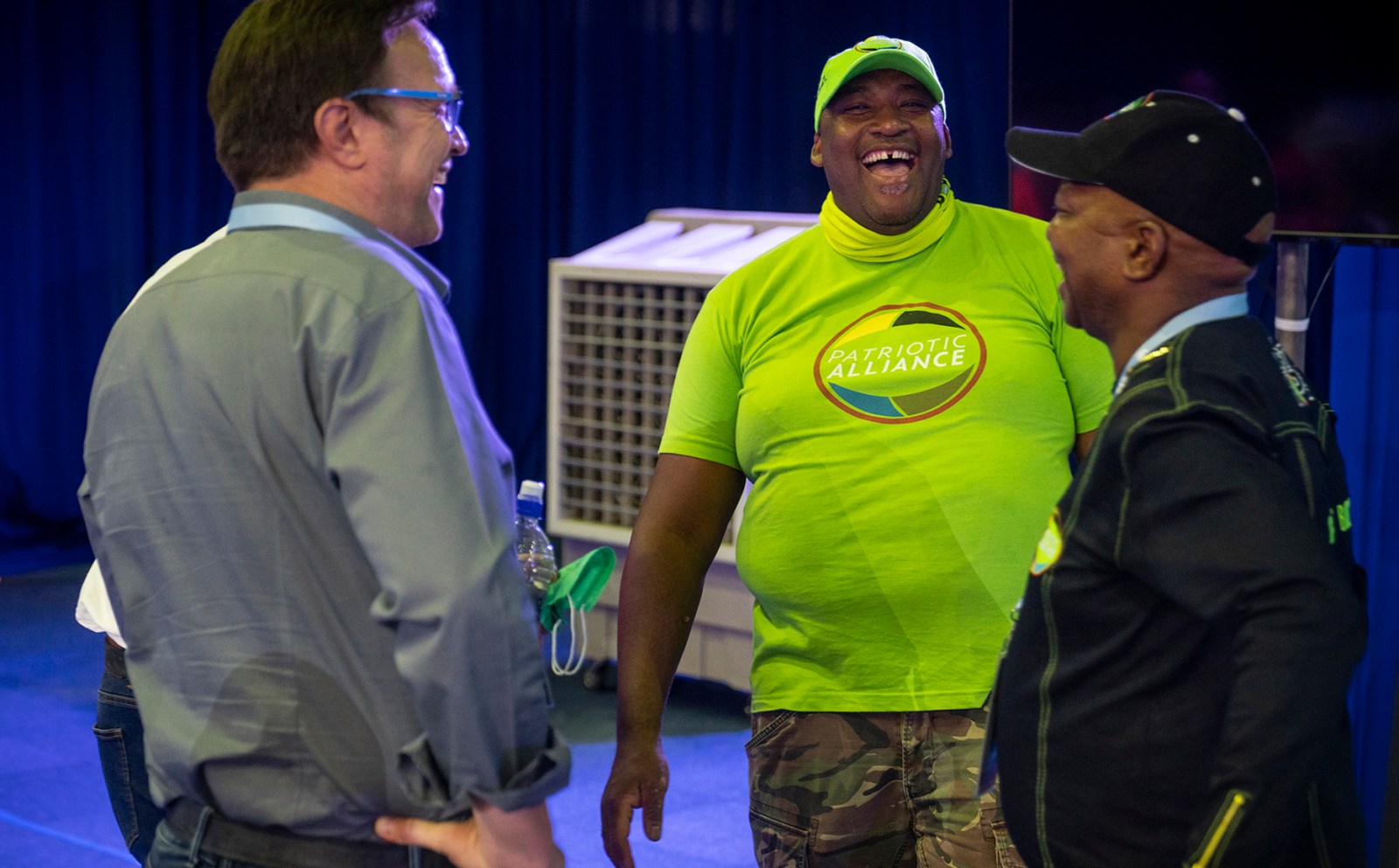 With 58 seats across nine provinces, the Patriotic Alliance is an election breakout story.

The newcomer Patriotic Alliance has carved out poor and marginalised coloured communities to secure a position as kingmaker in councils across the country.

At the time of writing, the party had won 58 seats across most provinces, said party leader Gayton McKenzie, who will not take up any position.  “That salary is too little,” McKenzie told Daily Maverick.

PA campaign manager Eugene Botha said “we have done quite well across the country”.

The party’s stronghold is Eldorado Park, the sprawling community of townships in the south west of Johannesburg.

Meaning “The Golden Park”, Eldorado Park is very different from its namesakes in other countries. Gang-ridden and poor, it is another of those cynical township nomenclatures favoured by apartheid’s architects.

The PA has also won seats on the Garden Route in Bitou and Knysna, in the rest of Johannesburg, in Cape Town, in Nelson Mandela Bay and in Mpumalanga and Limpopo – most but not all in coloured areas.

The identity of king of the coloured people is a new one for the polymath politician.

McKenzie is one of South Africa’s most well-known ex-convicts, a club owner and leader of the night-time economy, biographer of former president Jacob Zuma, politician and businessman. He is now in mining and general investments in addition to being a political entrepreneur. In the hustings, the Patriotic Alliance is called “Pa”, Afrikaans for father, and McKenzie is the godfather. On the streets he is “G” and everybody knows who that is.

Asked about when he began to grow his base, McKenzie said it goes back.  When he got out of prison, one of the conditions was that he did community service in schools, helping vulnerable young people to think about a life outside of crime.

He wrote two motivational books for those tours of service which were eventually so popular that Chubb Alarms sponsored the school visits as part of its corporate social responsibility. The books, A Hustler’s Bible and The Choice, are still bestsellers.

Conditions in places like Westbury, Eldorado Park and on the Cape Flats have not flourished since 1994, and for many young people the gang economy is often the only option.

“I have been working in coloured areas since my release from jail 20 years ago. If there’s a funeral people know who to call. When people’s bodies are lying at Kerr’s (a local undertaker) for three months, they know who to call. I used to tell people to vote for the ANC, to vote for Zuma when they asked me. But the ANC doesn’t care about coloured people.

“(For the ANC), coloured people are no longer black,” claims McKenzie, who is still close to many people in the ANC. He says local government jobs at community centres, libraries, schools and the like are increasingly reserved for black African people. When the PA first won seats in by-elections, he says he found out that “maybe four or five” of 45,000 jobs in the City of Johannesburg administration were held by coloured people.   The PA was part of the ANC-led government of local unity in Johannesburg but fell out with local leaders.

His employment numbers are likely to be an exaggeration, but McKenzie speaks in rhetoric which made him such a success on the stumps. But if you report in areas like Eldorado Park where the PA swept the boards, the perception of coloured marginalisation from the jobs market is common. “Not white enough under apartheid, not black enough in a democracy,” is a common refrain wherever I have reported. As the mid-year population estimates for 2021 show, the coloured community is now at 5.2-million people – much higher than Indian and white people. Nett migration estimates from the same population show that the numbers of white and Indian South Africans will go down while African and coloured communities will grow.

McKenzie and the PA have carved out a growing political constituency which used to vote for the ANC but now feels alienated from it. “In Eldos (Eldorado Park), in Reiger Park (Boksburg), Noordgesig (Soweto) there is zero development. In Noordgesig, I had a mother saying her kids couldn’t find place in the local school. When I asked why, she said ‘must my child get bread or get an education?’,” says McKenzie, who peppers his conversation with real-life examples of his constituency’s hardships.

The Noordgesig example is a shot across the bow of the Gauteng education department’s online school application and registration system, which is so dysfunctional that children get sent to schools outside their areas by dint of administrative fiat.

Since the results came in on 3 and 4 November, McKenzie’s phone has been ringing off the hook with potential coalition partners who need the PA seats to cobble coalitions as 65 municipalities were hung at the time of writing.

He had just got off the phone with DA federal chairperson Helen Zille. “We didn’t talk politics,” he says, adding she was shooting the breeze with him.  Zille is the DA’s chief negotiator. “I don’t care who we align with, even with the EFF (on the other hand, his bromance with EFF leader Julius Malema is over). We are clear on what we want: Illegal foreigners must be deported.  There must be a bailout for residents (for electricity, water and utility bills) – why must only business get a bailout?).

McKenzie’s anti-foreigner position is also new. When he owned the ZAR night-clubs they were totally cosmopolitan places with a pan-African following. His roaringly successful Rivonia on Deck club was built off Nigerian patronage and did so well that he followed it up with Abuja on Deck, another successful club in the north of Johannesburg.

He has big buddies in the wealthy pan-African melting pot that defines a lot of big money in Johannesburg.

“During Covid I was totally convinced they gotta go. We want foreigners but they must come with special skills. There was a huge shortage of oxygen (in his base communities) and I had deals with people to supply. Why? The hospitals were full of foreigners. People died.”

He says the Department of Human Settlements database shows that Nigerian citizens own 9,000 RDP houses in Gauteng and the Western Cape.  (There are well over one million RDP houses in the country).

“Somalians killed tuck shop businesses,” he says. He continues that no other country would allow South Africans to establish businesses in such a laissez-faire way. In Dubai and China, he wanted to start restaurants but was told that the best areas were reserved for local licensees, he says. In a chilling election promise, McKenzie says: “Somalians are leaving where we are in charge.” (More Somalian shopkeepers have died in criminal and xenophobic violence than any other group in South Africa.) In Johannesburg, three parties have campaigned on an anti-foreigner ticket. The PA, Herman Mashaba’s ActionSA, and while the DA is not as combustive, mayoral candidate Mpho Phalatse posted pictures of her meeting with the Dean of Ambassadors in Pretoria to talk about “illegal immigration”.

PA campaign manager Eugene Botha says that in their door-to-door work people told them that their spaza shops had closed down (owing to competition with far more competitive Somalian shop owners) and that work as domestic workers and gardeners was no longer available to them.

McKenzie has chosen his ward candidates among local heroes, such as charismatic preacher Dwain Ponsonby, the former addict Juwairiya Kaldine from Eldorado Park, who has turned her life around to become a community activist, and Dino Peterson, who was paralysed after being shot by the police. He is a local hero in Ekurhuleni, Gauteng. The PA campaigned on a ticket called “Ons Baiza Nie”, which is roughly translated as “We’re scared of nothing”.

It explains why the campaign has caught the imagination of its targeted constituency. The phrase is an old and typical response to the hard life in coloured areas which has not demonstrably shifted since 1994. “I am going to use these votes we got to make coloured people get treated with respect,” he says. DM