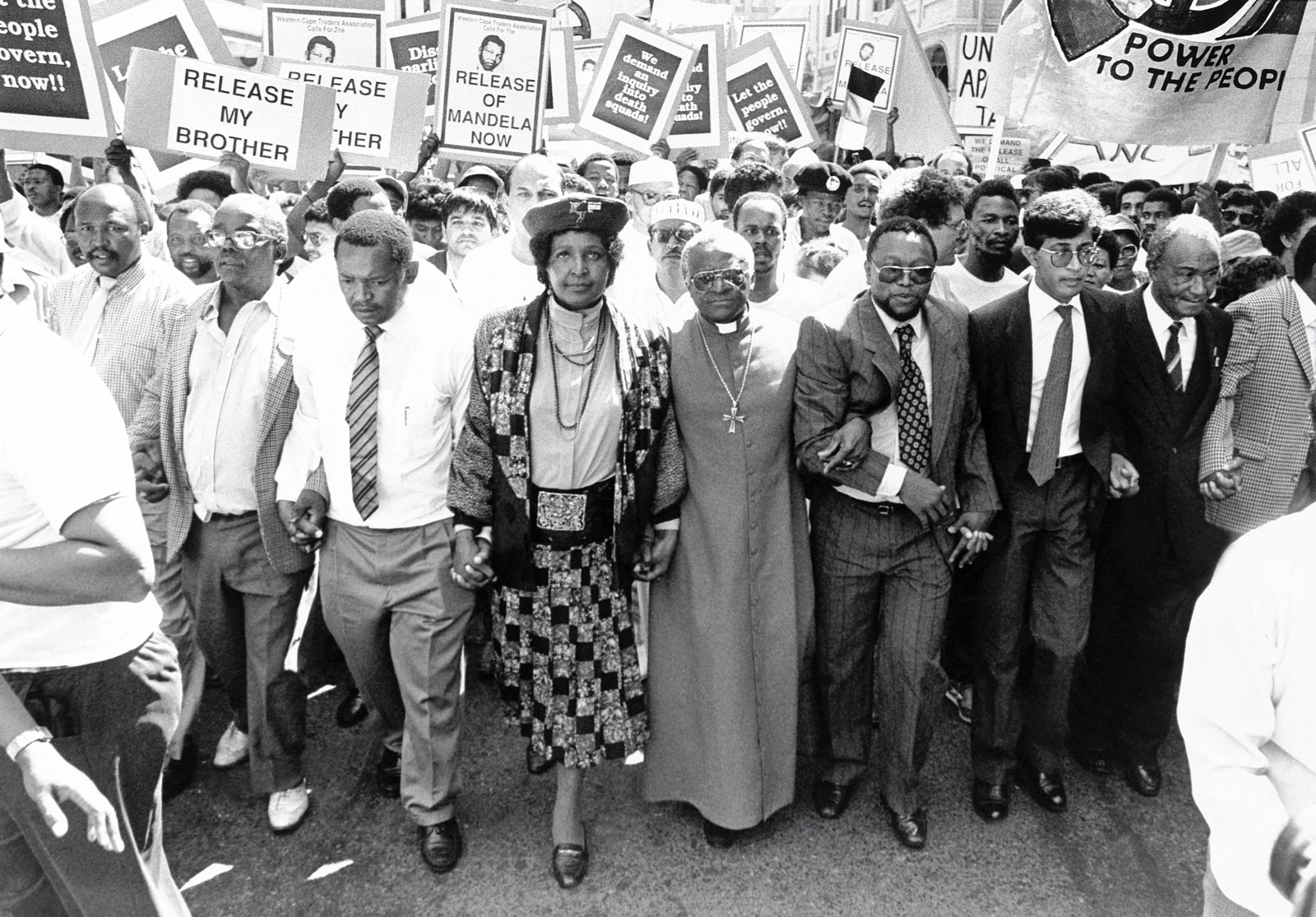 Date and location unkown. Anti-apartheid activists including Winnie Mandela and Archbishop Desmond Tutu, march with a crowd, waving posters and banners calling for the release of Nelson Mandela. Mosiuoa Terror Lekota is to the left of Winnie Mandela and Trevor Manuel can be seen behind her. Image: Supplied

A raft of confessions have been published in the past three decades chronicling the stories of white men in uniform who plied their trade as apartheid heavies and enforcers. The brutality they dispensed – killings, assassinations, torture, beatings – also came to light in two commissions: the Goldstone Commission, which exposed the a dirty tricks campaign of the apartheid-era South African Defence Force to forment violence in black townships in the 1990s; and the Truth and Reconciliation Commission (TRC), which was established to help South Africa deal with its violent past.

A new book, Confessions of a StratCom Hitman, has been written by Paul Erasmus who left the police in 1993. He served during the most brutal years of the apartheid regime, and prior to the book had already testified to the Goldstone Commission, and the Truth and Reconciliation Commission .

His book is nevertheless a welcome addition because it covers a raft of new revelations.

These relate to both the Special Branch, the notorious police unit that targeted anti-apartheid activists; and Stratcom, the strategic communications section of the National Security Management System. This entity clustered various government departments under brigadiers or other military officers.

One theme of interest is the revelation that the rise of the Afrikaner Weerstand Beweging (AWB), a racist militia of far right-wing Afrikaner nationalists, from 1987 caused serious schisms in both the Special Branch – which led to factionalism and some police refusing orders to fire on AWB members attacking others – and in the uniform and detective (CID) branches of the police force.

The rise of the right-wing faction led to the police force being split into two camps – those with more extreme rightwing views and those with marginally less radical views who supported the ruling National Party.

This was significant because it led to some police refusing orders to fire on Afrikaner Weerstand Beweging members who were committing crimes.

Stratcom routinely fabricated smears against Winnie Mandela, for instance claiming that she smoked marijuana and was an alcoholic.

The book is also a useful reminder of how the Special Branch’s white racism was buttressed by anti-Semitism, anti-Catholicism and homophobia. One Stratcom project – Project Epic. (p.192) – was devoted to indoctrination against Catholicism. Erasmus intriguingly names, without any details, a Project Drama, proposed to destabilise the government that would be elected when apartheid ended in 1994. (p.191)

This tells both about the failed ambitions of the state security apparatus under apartheid, and confirms what is known about the brutality of the period.

Antagonism in the ranks

Erasmus writes about how shabbily the apartheid regime treated its own staff. Salaries were appallingly low. And the police financiers often refused to refund him for overseas phone calls made on official duty.

South African Police officers of the uniform branch regarded the Special Branch as either “glory-seekers” or “arse creepers” (p. 13). The unit’s members on the ninth and tenth floors of the notorious John Vorster Square police station nicknamed a Major Arthur Cronwright “little Hitler”. (p. 68). John Vorster Square was the biggest police headquarters in Johannesburg, then as now the largest South African city.

But I am sceptical of Erasmus’ claim that the Special Branch was shocked by the assassination of Rick Turner. The political philosopher and anti-apartheid activist was shot as he opened his front door in 1978. Erasmus argues that he didn’t believe that the security forces killed white people.

But he contradicts himself by writing how a superior ranking officer ordered him to murder a released white convict, (p.101) and a Special Branch major ordered him to shoot a police station commander because he was giving his son, a new constable, a hard time. (pp. 154,167)

Confessions of a StratCom Hitman usefully also provides evidence of a Special Branch culture preferring casual lawlessness to prosecutions or legal repression. It is striking how a Special Branch major demanded his subordinates “fuck up” University of the Witwatersrand politics professor Tom Lodge, (p. 99) when he never ordered Lodge’s deportation or banning. Lodge currently lives in the UK.

Erasmus also reveals the line of command on parcel bombs. These were used to assassinate leading South African activists who had fled abroad. He writes that every parcel bomb required individual permission from the Minister of Police. (p.18). These included those that killed Ruth First, a communist intellectual and Jenny Curtis, a former leader of the anti-apartheid National Union of South African Students.

His memories of a tour of duty in Ovamboland, Namibia, include discovering that a gay conscript complained to a policeman about repeated rapes by South African Defence Force officers, and South African Air Force helicopter gunships machine-gunning elephants to poach their ivory. (p.158)

Equally interesting is the author’s memories of an academic from the International Relations Department of the University of the Witwatersrand more than once lecturing Stratcom and the Special Branch members. The liberal open universities had a diversity of academics, and included some hard-line participants in both the censorship board, and the support to the police unit revealed here.

One interesting topic is apartheid South Africa’s foreign policy. The Special Branch vetted all personnel who applied for jobs in the civil service and parastatals. It also vetted all South African job applicants to the Israeli airline El Al. (p.34)

Erasmus is determined to expose the National Party’s abuse of the Special Branch and Stratcom for its party political purposes particularly between 1990-1993 when negotiations were underway to end apartheid.

Projects and operations included one to form a new political party, ideologically positioned between the National Party (NP) and the Democratic Party (today’s Democratic Alliance) with the aim of winning the first democratic elections in 1994. (p.103) Erasmus calls this abuse as it would be using taxpayers money to fund a political party, and the NP was simultaneously negotiating with the ANC over the transition to democracy.

During 1991, when the end of apartheid seemed imminent, the Special Branch shredded 185,000 files on people and organisations. (p.110)

Perhaps these dated all the way back to the founding of the notorious police unit by Prime Minister Jan Smut’s government in 1947?

Erasmus writes that his work and what he witnessed caused him depression, nightmares, heavy drinking, post-traumatic stress disorder, and the loss of 49 kgs in weight. He estimates he committed 500 crimes during 80 incidents. (p.221)

The author died earlier this year, aged 65: these revelations are among his legacy for South Africans to learn from. DM/ML

Confessions of a StratCom Hitman is published by Jacana.
This story was first published in The Conversation. Keith Gottschalk is a political scientist at the University of the Western Cape.