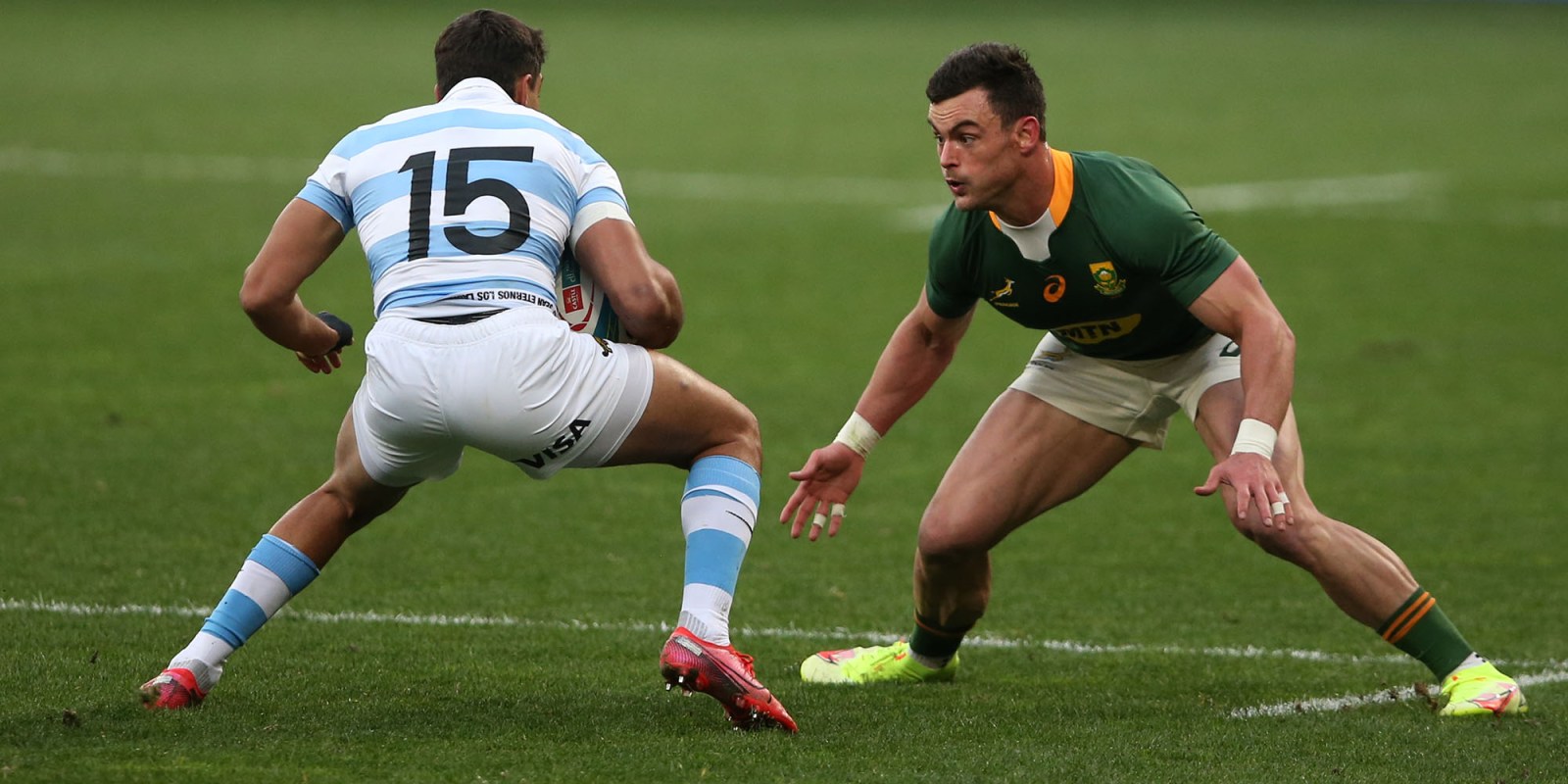 Springbok coach Jacques Nienaber said before the tour to the United Kingdom that he was hoping to build depth for Rugby World Cup 2023 in France. He is doing just that.

On the face of it, Springboks coach Jacques Nienaber pulled a surprise by naming experienced centre Jesse Kriel at wing and Damian Willemse at fullback for Saturday’s clash against Wales in Cardiff.

The coach opted to rotate his team, which means a rest for Willie le Roux and no place for the exciting young Aphelele Fassi in the matchday 23 this weekend. And it might stay that way deeper into the tour as well.

With Le Roux, who is the defensive organiser in the back three, absent, the trio needed a defensive lynchpin. Willemse is the man being groomed as the long-term Bok fullback answer, but he is still learning the position at Test level. Picking Fassi would have been a risk without some old heads around him.

It will only be Willemse’s fourth start in his 15th Test, while Kriel last played for the Boks 10 weeks ago against Argentina in Gqeberha.

In the modern game the back three requires complex defensive organisation and Kriel, along with Lukhanyo Am, is one of the defensive leaders in the backline.

Instead of operating in his usual position of outside centre and marshalling the defence inside him, Kriel will be tasked with organising the back three from the wing. His nous is essential considering the aerial assault that will certainly come from Wales.

It’s not a regular role, but something Kriel has done before — most notably when he started on the wing when the Boks beat the All Blacks in Wellington in 2018.

The plan then was to experiment with Kriel at wing, but Am broke his arm and Kriel was needed at outside centre for the remainder of the season. Cheslin Kolbe replaced Kriel at wing and, well, the rest is history and the entire Kriel-at-wing project was put on ice.

But it’s back on the agenda on this tour, with Kolbe injured and Sbu Nkosi unavailable due to passport issues that saw his departure from South Africa delayed.

It’s also back in vogue because Nienaber wants to grow his fullback depth, which means tapping into Kriel’s experience in the back three with Le Roux likely to sit out next week against Scotland as well. All this shuffling means that Fassi, as the least experienced of the current crop, will have to bide his time.

Fassi is an extraordinary talent with speed, skill and an innate ability to read the game. In 2017 those same things were said about Willemse, who through a combination of injury and bad timing, has had to be patient.

Willemse was a school and Junior Springbok starlet, playing at flyhalf and inside centre. But when Nienaber and former coach Rassie Erasmus brought him into the set-up in 2018, it was with a view to becoming a fullback.

That meant he’d have to apprentice as understudy to Le Roux, the man Erasmus and latterly Nienaber have entrusted as the last line of defence and communication. Willemse’s development has been slow and steady, but also rewarding.

At 23, Willemse already has a World Cup and Lions series winners’ medal in his cabinet. He played a part in both campaigns and it now looks as if Nienaber is clearly going to use this tour to allow Willemse to emerge from Le Roux’s shadow. The trade-off? Fassi must accept that his Test apprenticeship is in its early stages and that his chances will be limited for the moment — just as Willemse’s were.

“Willie has played the majority of Tests at fullback since 2018 and we know what we have in him,” Nienaber said. “If we were playing a World Cup final on Saturday, we would probably select Willie because of his experience and what he has done in the past.

“This is the ideal situation to give Damian an extended opportunity, which he hasn’t had. He can now settle into the fullback position. We have asked Willie to help develop both Damian and Aphelele. Willie is feeding as much information as he can to them.

“But having said that, they are all different players with different skill sets and x-factors. There are certain aspects from a team perspective that they have to drive, but they also have to find their own foothold in the game that suits their personal style of play.”

As always under Nienaber, the Bok camp remains the most brutally honest of places. Since Nienaber and Erasmus took over in 2018, the team culture has moved to one of honesty and accountability.

Selection meetings have never been held behind closed doors. Players have always been free to listen in and even have a say. Assessments are open and transparent and while there is always natural disappointment at missing selection, there is never resentment or distrust, because the environment is so brutally honest.

Nienaber emphasised that point again when naming his team to face Wales, because, as ever, there were many fine players — Fassi among them — missing out on playing a Test. And there will be more disappointments in the coming weeks and months.

“We will constantly try and wear our France 2023 cap, by growing our depth for Rugby World Cup 2023, but we don’t want to make earning a Test cap easy,” Nienaber said.

“The fact that Damian [Willemse] has only started three Tests previously, shows how hard it is. You really have to work hard to get a Test place in this Bok team.

“I have the selection conversation in front of the whole team — and I told Aphelele that Damian has been patient and waited for his opportunity since 2018. He has worked hard and trained well and we, as coaches, feel it’s time now. He has spent three years in the setup and knows the systems well. “This was all explained, not only to Aphelele and Willie, but to the entire team who sat in on the selection meetings.

“It’s tough to leave players out of this team currently, but at the same time, we really are fortunate to be in that position. But it’s hard to get into this team as well. Everyone works hard and is putting in the effort and every player brings their own skills and attributes.

“We have a specific plan in mind for these three Tests and if it goes to plan then there might be an opportunity for Fassi, but in rugby we can never predict too far ahead. Things might change and we might be forced to go a different route. Winning is our main priority.

“Everybody in this squad takes the selection news well, and that’s because we are open and honest. Explanations are given in front of everyone, so Aphelele doesn’t wonder what I told Damian, and so on. The players understand our thought processes, but that’s not to say there isn’t disappointment.

“But when you’re not selected your job is not done. You have another job, which is to help prepare the 23 for the match. You know what? They get over it quickly and they focus on their next task.” DM