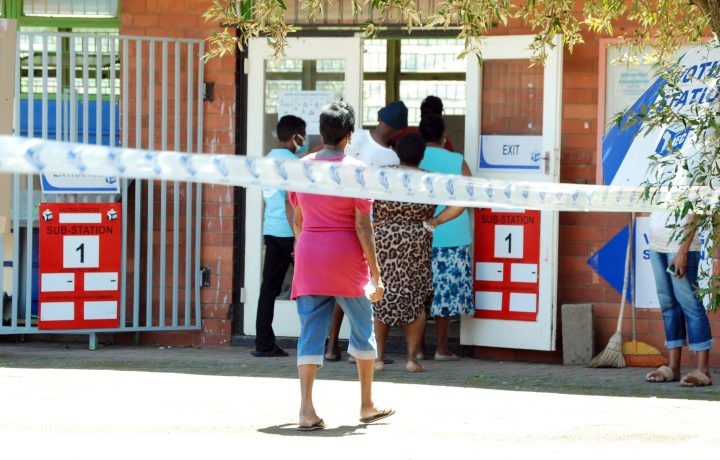 Racial tension that arose during the July mayhem, which resulted in the killing of mostly black Africans in areas such as Phoenix, still simmer in Chatsworth.

Nokulunga Zaca, a 37-year-old woman from Welbedacht in Chatsworth, stood patiently in line to vote at the Ajrum Chatsworth Temple in Ward 77 on Monday afternoon.

On 31 July this year Zaca’s 17-year-old son, Sfiso Telile, was stabbed and bludgeoned to death. His death was linked to the Indian-African tensions that arose during the looting and mayhem which resulted in the killing of mostly African people in areas including Phoenix.

Dean Moodley, the 69-year-old stepfather of Sfiso’s girlfriend, was arrested in connection with Sfiso’s death and granted R5,000 bail. He allegedly bludgeoned the youngster with a stick. A minor who allegedly stabbed Sfiso was granted free bail and placed under parental supervision. They will both appear in the Chatsworth Magistrates’ Court on 18 November when a trial date will be set.

Sfiso’s family is adamant that he was attacked because he was in a relationship with a 17-year-old Indian girl. But the families of the accused say it was not a racially motivated killing.

Zaca said tensions remained, and that some family members of the accused are still harassing and threatening Sfiso’s cousin, who is a witness in the case since he was present during the assault.

The family are worried that Sfiso’s cousin might be killed as well, she said, because the accused are out on bail. The accused was using “rotten cops in Chatsworth” to do his dirty work and harass the family.

“First they tried to change the statements of the witnesses, now they are using the police to intimidate the witnesses and disturb our peace,” Zaca claimed. “The reason I’m voting today is that I still have hope that someday I will find justice for my son. It is very sad that he died for being ‘black’ after 27 years of democracy. But I’m voting for change. I pray that the newly voted councillor should take our African grievances seriously – we are all human, we deserve to be treated as such.”

Mbele dismissed the claim that the accused were using the police to do their dirty work, adding that cases all races are treated equally in Chatsworth. The police were not aware that witnesses were being threatened but would investigate.

‘No point’ in voting

In other areas of Chatsworth, voting proceeded peacefully and without problems.

However, in the Umhlatuzana area, Daily Maverick found a number of potential voters who didn’t bother casting their ballots, including 47-year-old Terrence Mungal, who said he was unemployed.

“I don’t see the point of voting. During the looting, the councillor didn’t come to our rescue. We were suffering alone without any food. We had to fend for ourselves. Why should I vote for them now?” he said.

His sentiments were echoed by Deelan Naidoo, a 27-year-old unemployed man from Umhlatuzana. “Why must we vote for people who are going to steal from us? Look here, we have potholes that have not been taken care of, we have no jobs. All that the councillors are doing to us is stealing. I don’t see the point of voting.”

By contrast, in other sections of Chatsworth people voted to change their situations, although retired bookkeeper Rodgers Balgobina (61) was not sure which party to vote for.

“For me the biggest issue is security. As I am going to vote here I am hopeful that I will get a smooth-running South Africa, where there is no bribery, corruption and stealing. Even as I am standing here in the queue I have not decided which candidate or party I’m going to vote for as they are all making promises and promises, with nothing to show for it,” he said.

Chatsworth has many informal settlements inhabited by black Africans who make their living in the area. Zanele Shozi (49) has been living in the eManyaleni informal settlement in Chatsworth’s Unit 2 for the past 15 years. “We have been saying we don’t want this dirt out here because it spills into our homes. But we are ignored,” she said, but added she was still voting for the ANC. “At least they are the people we can trust with delivering services.” DM