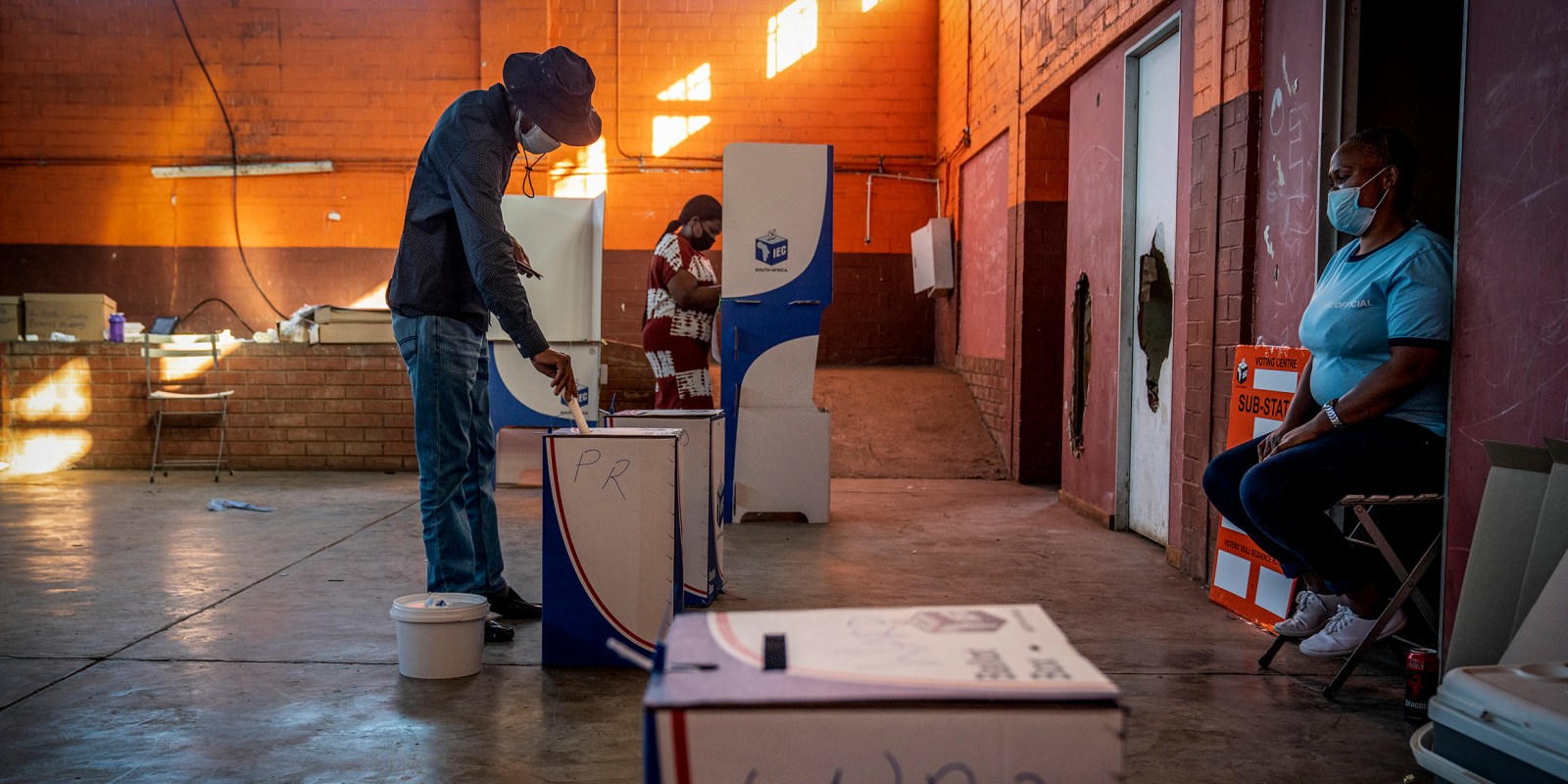 A resident casts his vote during the local government elections on 1 November 2021. (Photo: Shiraaz Mohamed)

Police and IEC members were kept busy in the Eastern Cape during the local government elections on Monday afternoon.

The local government elections in the Enoch Mgijima Local Municipality in the Eastern Cape started well, with people coming in numbers to vote. However, late on Monday, PAC members opened a case against the ANC with the Mlungisi police after a PAC member allegedly saw more than 200 ID documents/cards on an ANC table outside the voting station in Nomzamo, Komani.

After reporting this to the presiding officer, a meeting was set up between the police, ANC, EFF, PAC and independent mayoral candidate Ken Clark.

At the meeting, the witness was told to open a case with the police as the incident happened outside the voting station. Clark said that after the witness saw the IDs she reported the matter to her councillor candidate and the IEC.

“Police were called and when they arrived the ANC members had already taken the IDs,” he said.

PAC member Richard Thandazo said the IDs were being distributed to people at the table when one PAC member saw them.

“People would come without IDs and they would collect them at the ANC table. We don’t know why the IDs were on their table, but we feel that people can vote using other people’s ID because they wear masks when they are in the voting station,” he said.

EFF member Mzimkhulu Ndevu said he also saw the IDs and that they were kept in a big container.

“When asked, the ANC members said they got the IDs from loan sharks and they only gave them to the ANC so that they can make sure that they get the IDs back,” he said.

Ndevu said a case has been opened.

ANC member Fezeka Hoho said they did not have ID documents at the table.

“We only assist people who come here to see if they are on the voters’ roll.  We have no IDs here,” she said.

She said they had not received IDs from loan sharks.

In another incident, in Mangelengele village in Tsomo under Intsika Yethu Municipality, more than 20 people who were allegedly not on the voters’ roll were allowed to vote.

Independent candidate Mwezi Bikitsha said he saw this and reported it to the Electoral Commission (IEC).

“They told me that they will get back to me. My worry is that we don’t know how many people have done this,” he said.

Bikitsha has lodged a dispute with the IEC and is waiting for its response.

In Komani, Cynthia van Heerden was told by the presiding officer at the Elohim Assembly of God voting station in Aloevale to remove an artificial nail on her thumb or she could not vote.

At a second incident at the same voting station, a fight ensued after Zukiswa Toto was asked by two DA members who she would vote for.

The altercation broke out as Daily Maverick entered the venue. Toto said the fight started when she told the DA members that she would vote for the ANC, and they told her to “f**k off”.

The police intervened and things calmed down.

In another incident, Sam Matoti was about to vote, but was prevented from casting his ballot after he was told he was not on the voters’ roll at Elohim Assembly of God.

“I registered online and they sent me a message confirming that I have registered, but when I came here to vote I was told that I am not on the voters’ roll,” he said.

Meanwhile, voting was delayed in Skweyiya Hall and at a tent in Nomzamo in Komani because there was no electricity on Monday evening.

UDM member Mthuthuzeli Hokolo said Skweyiya Hall had connected to the power supply of Mlungisi police station in order to continue with the elections. However, EFF member Mzimkhulu Ndevu said they had connected to electricity from a nearby house. DM