Elections 2021: LIFE ON THE STREET 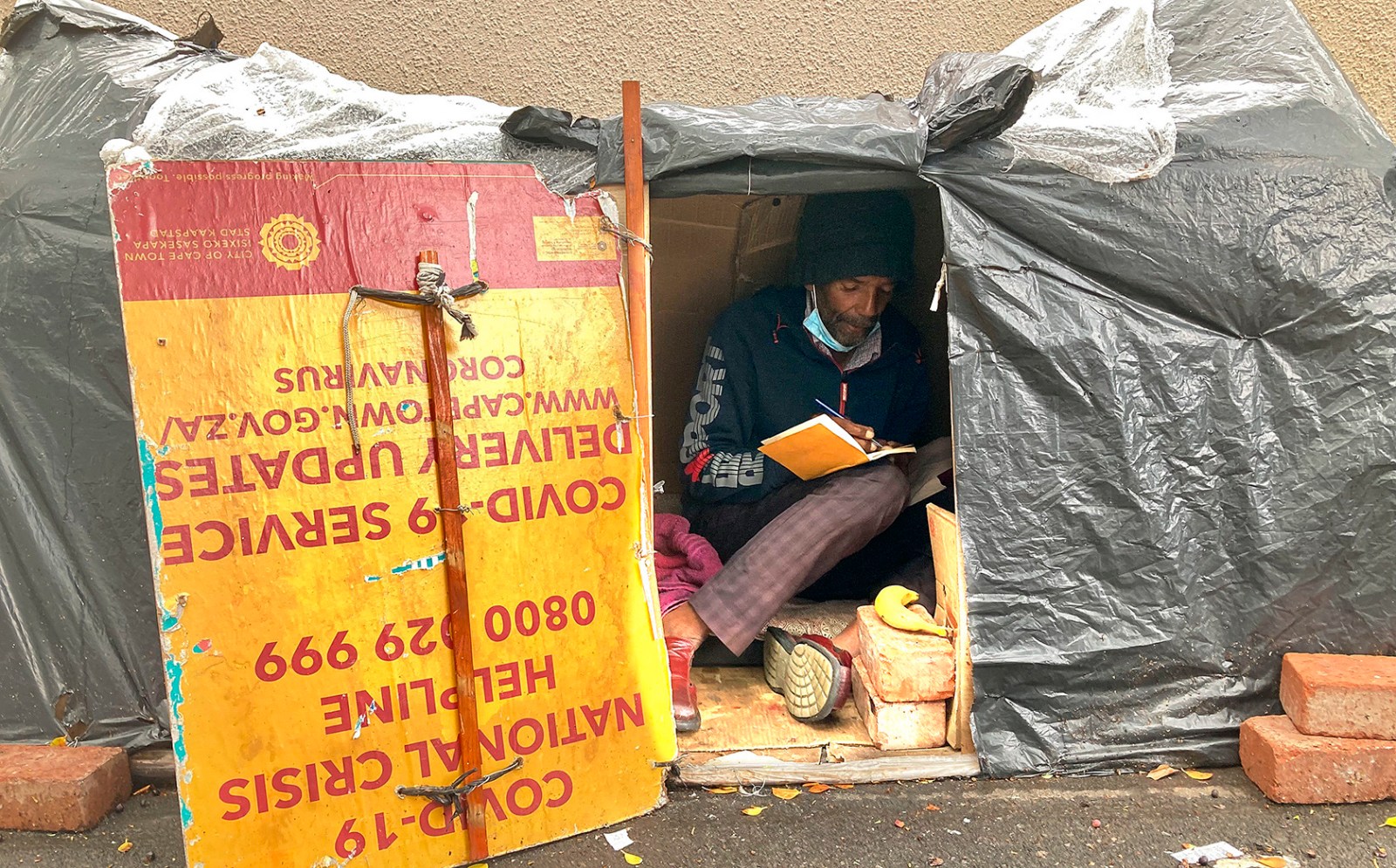 On Glengariff Road in Sea Point, next to Ellerton Primary School, Wilmar Heyns (52) is hunched inside his structure made of wood and plastic, which has withstood the weather – the interior is still dry and neat. (Photo: Biénne Huisman)

While early vote tallies suggest a record low election turnout on Monday, perhaps South Africa’s most disillusioned were the vulnerable and destitute who continue to fall through society’s cracks.

Exacerbated by hard lockdown, homelessness has spiked countrywide. In Cape Town, an estimated 14,000 people are now homeless – exemplified in Sea Point where makeshift structures and tents line a field next to tennis courts and ocean-facing blocks of flats.

As voters drew crosses inside Sea Point’s Ellerton Primary School – with its polished-wood assembly hall and velvet purple drapes – a block away homeless people in the “veldjie” [small field] next to the Green Point Tennis Club were hanging rain-drenched blankets to dry.

“My mind is on the rain and the wind, we have bigger problems than elections,” says Yolanda Qwabe (39), who is originally from Kokstad. She has lived in Sea Point for the past year.

Qwabe’s face twitches as she covers her possessions with a piece of plastic, next to a structure propped up against a DA poster. “Cape Town works. Let’s do more,” it reads.

The sun is out. But low clouds are a sign it will rain again soon. “Who would I vote for? All I care about is everything I own being wet,” says Qwabe.

Her friend, Fundi Hlobo (41), walks up, pointing at the DA poster. “This, it’s just material,” says Hlobo. “As you can see, for building our structures with. We don’t care if it’s DA, ANC, EFF, whatever. You know what I mean? With political parties the only people who benefit are those in higher places. We as homeless, man, you know: ‘Cape Town works.’ What? For who? Cape Town fails! The whole nation fails, you know what I mean?”

Hlobo has been sleeping with friends in a structure across the road – Helen Suzman Boulevard. She explains that her tent-mates are men and that she doesn’t feel quite safe. Life has taught Hlobo to trust only herself, and God.

Do you believe in God? “Ja, big time, hey,” she says. “Without him I wouldn’t be, like, talking to you even. That is the only thing that keeps me alive. Without him, you know…”

Maverick Citizen interviewed five homeless people in the area on election day – none of whom had an ID to vote with.

Sitting in front of Woolworths on Sea Point Main Road, Whinzel Hendricks (50), who also sleeps in the “veldjie”, says he walked three hours alongside the N1 highway to the Department of Home Affairs’ site at Canal Walk, to have his ID reissued last week. “It took me three hours, walking,” he says. “To get a new ID, all for nothing. They said to me I had to do it online.”

Hendricks says he first voted in Delft in 1994, for the ANC.

“There were lots of promises then, but nothing has worked out,” he says. “Now there are more homeless people than ever. If I could have voted today, I would change to the DA.”

Next to Hendricks, Johan Benson (42), originally from Paarl, huddles into his jacket as the wind cuts across the street. “We sleep in a tent next to the tennis court,” he says. “Rain destroyed our tent. Everything is wet. We went to get dry at the public toilets, opposite the garage.”

Across the road, in front of a hipster coffee bar, a man is scratching among wilted cabbage leaves in an overflowing wheelie bin. Wearing a long cloak and a witch’s hat – presumably Halloween discards – he begs passers-by for money.

Apparently, as the problem of homelessness increases so does the political rhetoric around it, often fuelled by a “not in my backyard” public sentiment.

Paul Jacobson of the Freedom Front Plus has been rallying to replace DA ward councillor Nicola Jowell. Jacobson is known for administering a Facebook group formerly known as the “Concerned Residents of Atlantic Seaboard”, which was linked to a Mini Cooper being torched on Beach Road in 2020, after the owner of the car fed homeless people during hard lockdown.

In the same interview, Jowell replied: “The incorrect expectation has been created that the City can simply remove homeless people from the streets of Sea Point.”

Meanwhile, also in the running for councillor in the area was Carlos Mesquita of the Good party. The former record company boss lived on Cape Town’s streets for five years.

At the height of lockdown he was one of 1,500 homeless people put up in four marquees at the City of Cape Town’s Strandfontein temporary shelter, which was decommissioned following safety and human rights violation criticisms.

In July, Mesquita publicly took on Jacobson for distributing pamphlets calling for “vagrants to get off the streets” along with a photograph of a homeless man’s exposed behind.

Mesquita says the system is failing society’s most vulnerable. He tells Maverick Citizen: “Strandfontein, it was like taking a picture of a moment, and in that moment you saw everything that was wrong with the way the City handles homelessness, their policies on homelessness.” Mesquita now lives in a house managed by the Rehoming Collective in Observatory.

Fieldworker Tasneem Hoosain-Fielies of civil group Souper Troopers, which helps homeless people in Sea Point, says existing official policies and programmes are inadequate, and fail to provide the dignity and lift-up required for destitute people to reintegrate into society.

“Many of these people can’t just go ‘home’. Often their problems started at home – substance abuse, gender-based violence, or whatever,” says Hoosain-Fielies, who used to be homeless, too.

“Mental health and getting a job is even difficult for people with houses. Now imagine living on the street, and having to deal with all of that. Getting a job often requires having a fixed address and identity documents.”

Hoosain-Fielies says Souper Troopers help homeless people obtain ID documents: “We stand with them there in the line at Home Affairs. We chat to them and get to know them, show them that they are valued and that they can trust us.”

On the field next to the tennis courts, Hlobo cannot estimate how many people are living in structures there, since the number increases all the time: “I’m not quite sure, man. You never know. They come and go, but now it’s, like, expanding.”

Hlobo is from Gugulethu. Her journey has been long – “a story for another day”.

“I’m local,” she says. “I’m black and I stay at the back, you know what I mean? So ja, I’m from Gugulethu. I went to black schools. My English is polished, God made that possible because I don’t even have a Grade 12, you know? I went to Fezeka Secondary School, then I jumped out in Grade 12.”

Hlobo’s distrust is fierce. She was at Strandfontein with Mesquita, but now labels him a sellout for having joined the ward councillor race.

Gesturing around her, she says: “You’re asking me regarding this old shit here? Well, I’ve seen so much oppression. I was part of the Strandfontein camp, I was the whistle-blower there, you know what I mean? I was the one who saw the irregularities of that place. I’m the person who actually came out to name it: ‘a Covid incubator.’

“So, I was vocal about our lives being put in danger. There was supposed to be 150 people in that tent, and we were like 650 people. No social distancing, no nothing. Terrible food. A person died on the first night there. A guy by the name of Archie died after 12am, because of the cold.

“When we arrived they only gave us one blanket to use as a mattress and as a blanket. He died at 12am, the body was removed the next afternoon. The body was still there, on the floor. We were eating in this same tent, bro. I tell you. And now, what has Carlos done? He’s sold out, moving into a mansion.”

On Glengariff Road, next to Ellerton Primary School, a man sits hunched inside his structure made of wood and plastic, which has withstood the weather – the interior is still dry and neat.

Meticulously, he writes his name and ID number in a booklet: Wilmar Heyns, 52 years old. Heyns barely speaks, his words are vague. Asked about the election, he nods and says: “Cape to Rio.” Cape to Rio? Smiling he reiterates gently: “Cape to Rio.” DM/MC