Thirsty for change: Promises of water remain as empty a...

Thirsty for change: Promises of water remain as empty as the tanks in Limpopo’s Lulekani township 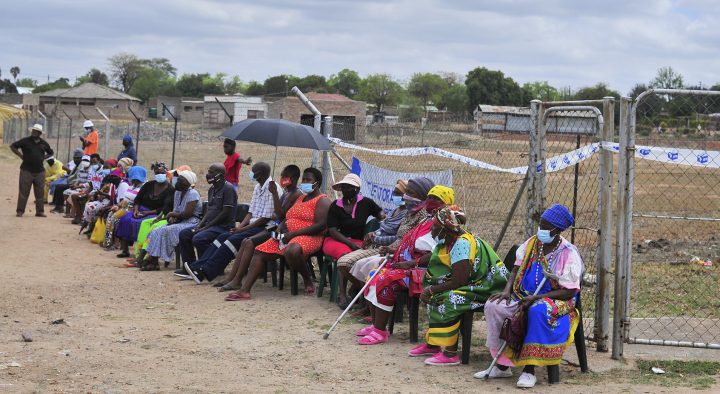 Voters wait outside a polling station in Lulekani, Limpopo on 1 November 2021. Residents say the area has undergone chronic water shortages in the past five years and blame the Mopani District Municipality for failing to act on numerous complaints. (Photo: Lucas Ledwaba / Mukurukuru Media)

Dozens of empty containers piled up near taps on a field in the scorching heat of Lulekani near Phalaborwa on election day underlined residents’ daily struggle to access water in this Limpopo township.

Before the sun rises, residents of Lulekani outside Phalaborwa walk to the communal taps located near water tanks to line up their containers. The taps run for a few hours on Mondays, Wednesdays and Fridays when the water is pumped from a borehole through an old pump.

By midday on election day, as some residents made it to the various polling stations around the township, the taps remained dry.

A few children hung around in case the pipes gurgled with water. In the yards, adults took refuge from the scorching sun, while at the polling stations, political party representatives sat at tables adorned with party colours as voters trickled in.

Election day did not generate much excitement among the people of Lulekani, where Electoral Commission officials expressed frustration at the low turnout.

Adelaide Teng, who had left some of her containers at the communal taps, said she did not vote.

“Voting will not make any difference,” she said.

The community initiated a petition through Change.org to push for the provision of water. It has garnered more than 25,000 signatures in just two weeks.

Community activist Sipho Mathebula, who started the petition, said they have engaged with officials from the ANC-run Ba-Phalaborwa local municipality and the Mopani district municipality, which is the water authority for the area.

Mathebula said the municipal officials had stopped communicating with the community forum, which led to a shutdown protest last month. He said they would hand the petition to the municipality on 9 November, and hoped this would resolve the area’s critical water situation.

The petition reads: “We have to spend our last cents on water, a basic right. Our toilets don’t flush because there is no water, we cannot realise our right to human dignity as a people. We are only afforded dirty water once a week, which has left me ill many times, including skin reactions. We have been told we are being denied water due to an unpaid municipal bill to the private company Lepelle [Lepelle Northern Water].

“We only ask for a basic human right to water. This water issue is slowly creating a divide in our community as women need water for basic sanitation, especially during specific times of the month. We are now faced with the humiliation of uncleanliness and judgement as we have to share these unclean toilets.”

Joseph Monyela, chairperson of Lulekani IDP and Water, an organisation set up by residents to tackle the water crisis, said water supply was top of the list of service delivery concerns in the area.

Monyela said the water issue had been politicised, adding that the community suspected the supply had deliberately been sabotaged to ensure politically connected people were awarded tenders to supply water via tankers.

He echoed sentiments by other residents and Lulekani IDP and Water that farmers around the area were compounding the problem through illegal connections to the water supply.

In the run-up to the local government elections, a social media post raised eyebrows. It said that a project to install 13 water tanks, with a capacity of 5,000 litres each, had cost the municipality R9-million. However, the ANC-run Mopani district municipality says this is not true and that it had spent only R2.4-million on the project.

The municipality acknowledged the water shortages, saying they were caused by illegal connections to the main water supply.

“The work included but was not limited to the supply, delivery and installation of 130,000 litres of water storage tank, construction of booster pump station, and pipework,” the municipality said in a statement.

“Our long-term project intervention in Lulekani will be the implementation of the multi-year project as part of Lulekani Water Scheme, which will be funded through MIG and our funds, estimated at around R222-million, targeting our communities in Lulekani, Matiko-Xikaya, Humulani, Kurhula and Benfarm.

“We are starting in this financial year with a budget of R40-million to refurbish the water infrastructure, construct additional storage tanks as well as reticulation,” the municipality said in a statement issued by spokesperson Odas Ngobeni.

But Mathebula is sceptical, saying this appeared to be another ploy to appease frustrated residents.

Limpopo’s water woes saw Minister of Water and Sanitation Senzo Mchunu make a three-day visit to the province in September, after which he promised to act and that the taps would soon start running.

But to people like Adelaide Teng, these words offer little comfort.

“Our lives are just about waiting for water. We have been waiting and we have been told things will change, but nothing changes,” she said. DM