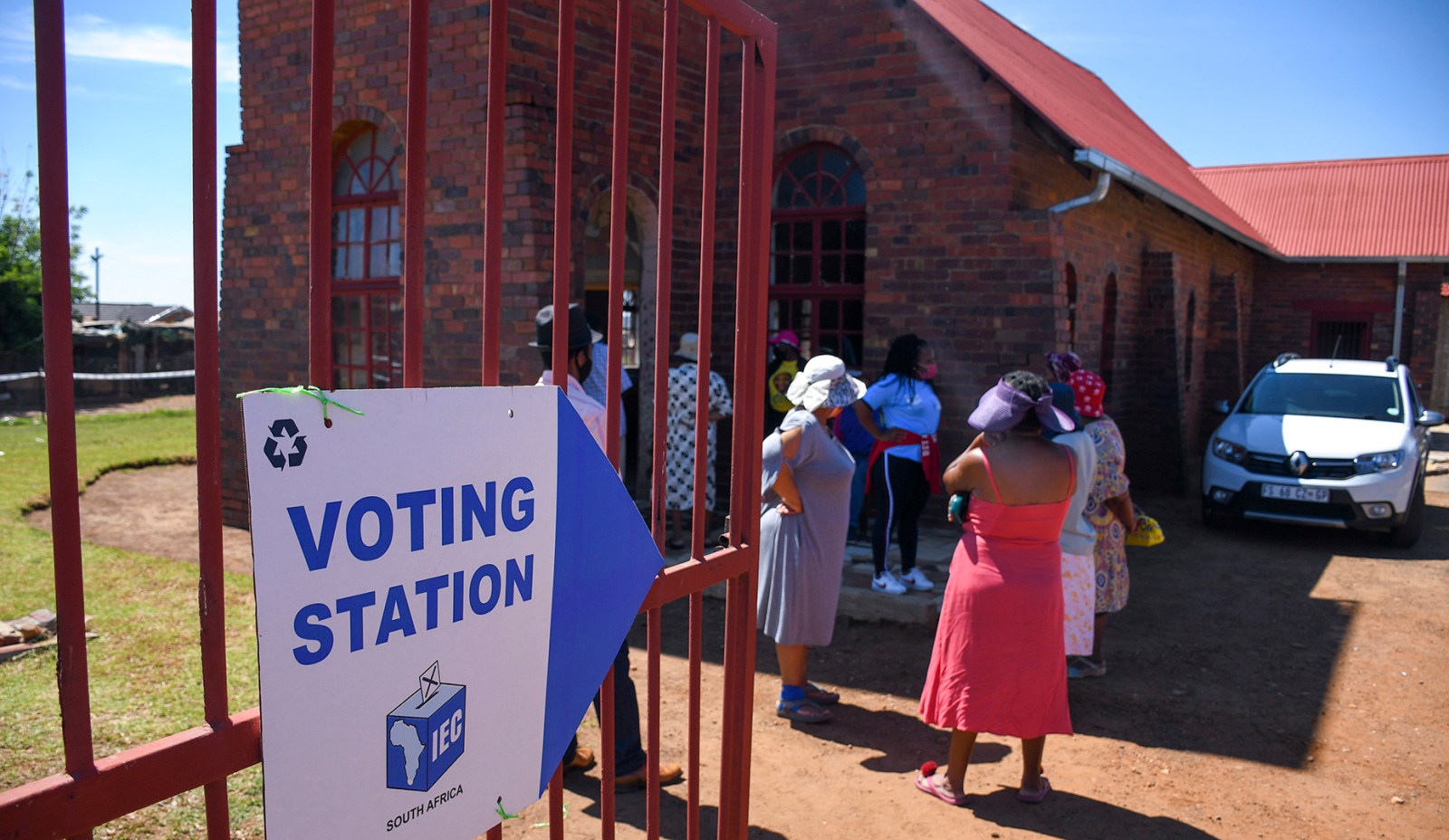 Residents of Sharpeville, Gauteng, line up to cast their municipal vote on 1 November 2021, frustrated with the lack of change in their community, feeling like they have been forgotten by the state. (Photo: Julia Evans)

Sharpeville, Vereeniging and Meyerton are within a short drive of one another, but the three towns have very different realities. On 1 November, voters explained what they hoped would emerge from the municipal elections.

In the towns of Sharpeville, Vereeniging and Meyerton, one thing stood out on election day — the people most keen on speaking about their reasons for voting were those who are struggling the most.

Their vote gives them a rare chance to have a say in what happens in their lives, and they hope that whichever party takes control after Monday, the new people in charge will take the time to listen to them.

Just a short distance from where 69 protesters were killed during the Sharpeville Massacre in 1960, and where Nelson Mandela signed the country’s Constitution into law in 1996, residents of Sharpeville lined up to cast their vote in local elections, frustrated by the lack of change in their community and feeling like they have been forgotten by the state.

Sharpeville, like many towns in the ANC-run Emfuleni Municipality, faces serious service delivery challenges. The roads are potholed and litter is strewn across pavements and open areas. Residents contend with regular water and power interruptions.

Emfuleni has always been an ANC stronghold, with its greatest support coming in 2006, when the ruling party won 76% of the vote. However, since then support for the ANC decreased, while support for the DA has increased. The previous municipal elections in 2016 saw the ANC win 56% of the vote. The DA got 25%.

As I approached the IEC voting station at the Ethiopian Church of South Africa in Sharpeville, Jane Dabula (71) came up and asked if I was a journalist. Unlike some voters I spoke to, Dabula wanted to tell her story and she wanted others to hear it.

“It is important to cast a vote for your country,” said Dabula. “As you can remember, as an African we didn’t vote for a long time. So we wanted to enjoy that. I’m not happy with the current government… the way they’re treating us, the things that they’re doing.”

Dabula, born and bred in Sharpeville, was 10 years old when she witnessed the massacre.

“There were so many people that were dead… near here and near where I’m staying,” Dabula recalled.

“It was Sharpeville 1960. People paid with their lives. I think they would be rolling in their graves to see what is still happening.

“People were shot here. It went on and on and on. But look at this place. There’s nothing!” Dabula said that sometimes there’s no water and that refuse collection only happens once a month.

She said most people in her community were not voting.

“They feel like it doesn’t help. They say that even those they vote in are going to do the same thing.”

Christoff Khoarane (64) is an amputee. He feels his municipality has failed him and that nothing has changed. “It must be something different this time,” he says.

Daniel Mofokeng (32) said, “Some, they want to vote, others they are ignorant. But me, I’m trying to chat with them.”

Mofokeng, who lost his job as a car guard at the Vaal Mall, feels it’s important to vote to help address youth employment. “I want to see youth working. I want to see more jobs.”

He wants the government to focus on the youth, noting how many young people died during the Sharpeville shootings in 1960. “People died, yet they forget us here.”

A previous Daily Maverick article reported that in the 2017/18 financial year, the Emfuleni municipality spent less than 66% of its capital budget. Municipal Money explained that municipalities should spend at least 95% of their capital budget and that spending less than 85% is a “clear warning sign”.

Additionally, Municipal Money revealed that Emfuleni received unqualified audits from 2015/16 to 2017/18, but its 2018/19 report is still outstanding.

Vereeniging is a short drive away from Sharpville and also forms part of Emfuleni municipality, its residents also face inadequate service delivery.

Chronic mismanagement by the ANC-led municipality has led to streets filled with refuse and riddled with potholes, sewage leaks and continued electricity outages.

At the Hoërskool Overvaal voting station in the suburb of Falcon Ridge,  Clareece Lessing (24) said she hoped her vote would lead to improvements in her community. She wants to see roads and education being improved.

“Every vote counts, everyone’s voice is important,” said Lessing, adding that while most people in her age group are voting, she’s noticed that many people younger than her think it’s not necessary or that it won’t make a difference

George Mtshali (38), from Steelpark in Vereeniging, thinks it’s important to vote to bring about changes in municipal service delivery.

Mtshali says that in his community, there are pipe leakages, load shedding and plenty of cable theft.

One woman, who asked to remain anonymous, said, “I want a better life. I want a job. I want a house… I don’t have a house.”

“You see now, we came to vote… after that we won’t see them again here. Nowhere to be found. We don’t want to see that.”

Lerato Phori (30) said she wants to see unemployment addressed. “Seriously, we’re struggling. They need to do something about the youth. And our government, they can produce work for us but they don’t want to. We don’t have facilities [where they can get skills or experience].”

Phori said it’s frustrating to be turned away from jobs because she lacks experience.

“That is why now, we don’t want those old people. We want the youth to be in control, because they know our needs and they will understand us.”

“Our water’s not right. We’re sitting without lights. It’s gone to the dogs… it’s terrible, we can’t live like this,” said Stander.

She hoped her vote would make an impact, potentially leading to a better-functioning municipality, like the neighbouring Midvaal Municipality.

“They get first prize just about every year for a nice, clean municipality,” said Stander.

As you drive through the main residential area, Meyerton, you immediately notice the difference. You no longer have to swerve around endless potholes and there aren’t piles of refuse on the pavement or sewage running in the streets (although Meyerton Wastewater Treatment Works does contribute to pollution in the Vaal River).

Midvaal is one of just 27 municipalities in South Africa that received a clean audit for the 2019/20 financial year.

According to a previous Daily Maverick article, Midvaal is one of the most sparsely populated municipalities in Gauteng and, at 43%, has one of the highest proportions of white residents.

Midvaal is a DA stronghold. The party won 60% of the votes in 2016. However, the DA also beat the ANC in Wards 1 and 4, where the majority of residents are black. The ANC obtained 32% of the vote in 2016, and there was growing support for smaller parties, with the EFF taking 5%, giving them two seats in council, and the FF Plus getting 3%, giving them one seat.

“The party I’m voting for has been keeping our place clean and delivering services well.

“If you don’t vote, you don’t have a say in changes that are made.”

Johan van der Merwe (41) said he was voting to keep things the way they are.

“We haven’t had any problems. We both [he and his wife] grew up here, and we’ve been back for the last 10 years.” DM