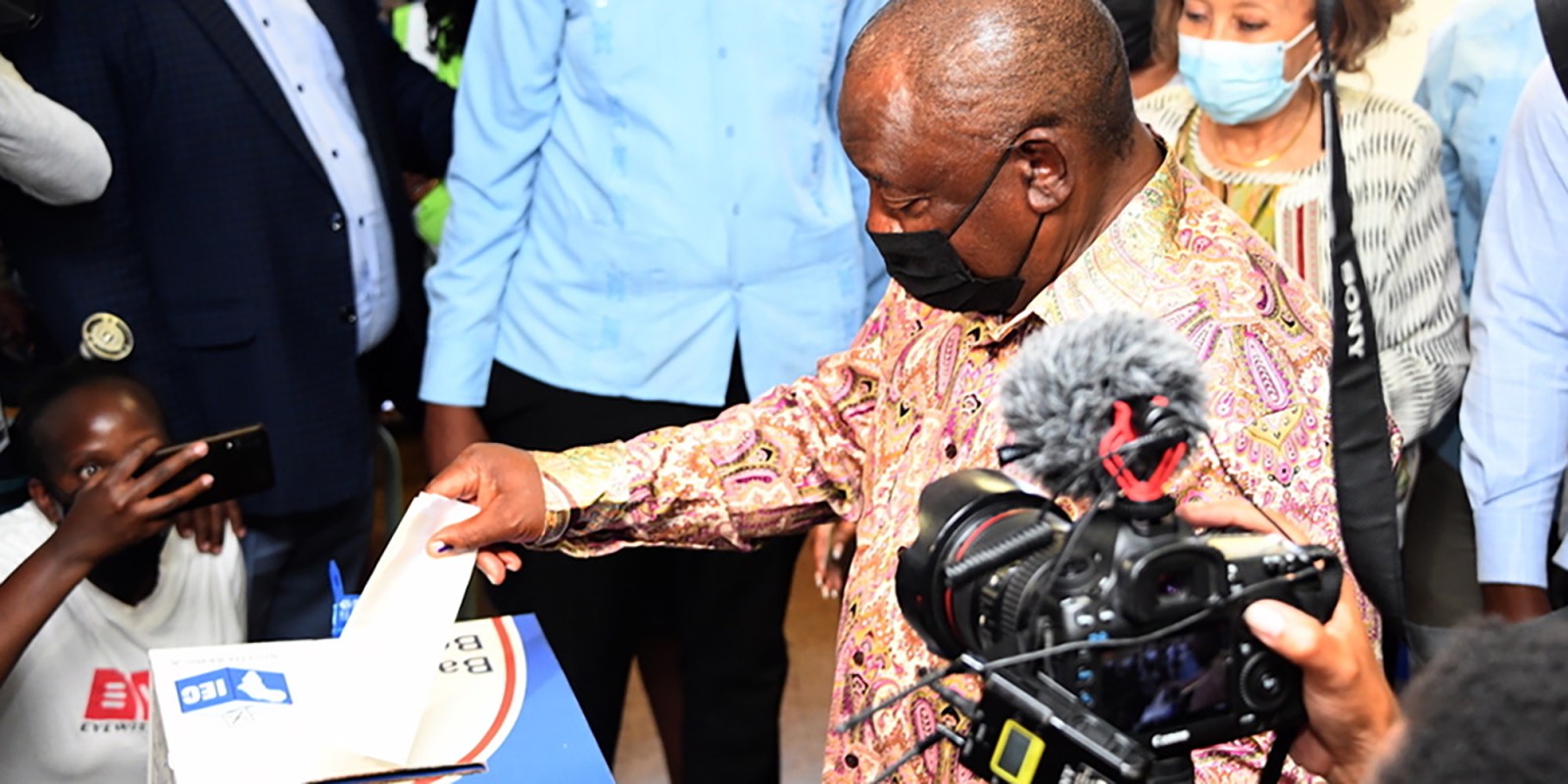 Voting got off to a slow start in some parts of Soweto, where President Cyril Ramaphosa cast his vote on Monday. The area has recently been rocked by service delivery protests over the haphazard supply of electricity.

President Cyril Ramaphosa and his wife Dr Tshepo Motsepe voted at the Hitekani Primary School in Chiawelo, Soweto, on Monday, after protests over a lack of power in the area. Like everyone else, Ramaphosa’s convoy had to navigate the rocks, rubbish and rubble strewn across the road.

There was a mixed reaction to the arrival of the president. EFF and ActionsSA supporters chanted, “We want electricity, we want water.” Others tried to ask what had happened to the R500-billion Covid-19 relief fund, claiming it had been stolen.

Ramaphosa was accompanied by Gauteng premier David Makhura, Johannesburg mayor Mpho Moerane and other ANC officials. After casting his vote, Ramaphosa briefly spoke to the media, saying he was happy that people had come out in their numbers.

Many of those who were at the voting station in Chiawelo, however, appeared to be there to see the president rather than vote. Many did not even bother going inside the polling station. After Ramaphosa left, they returned to their homes.

Ramaphosa said the ANC was certain of victory and that this time the party would do things differently.

“This is the one election where we say we are going to do better,” Ramaphosa said.

Chiawelo resident Solly Mashila, who came to see the president, said he had not decided on who to vote for.

“We have no electricity and we have no water. The local ANC councillor is a neighbour. I have been to his house to ask for work, but he always hires the same people. He even failed to give me a gardening job at his home,” said Mashila.

At other voting stations Daily Maverick visited in Soweto, it appeared that a low turnout was on the cards.

At the polling station at Kwa-Ntsikana Secondary School in Orlando West, everything seemed to be running smoothly. One elderly woman complained that she had been sent to the wrong venue. Transport was provided for her to get to the correct voting station.

Another elderly woman who struggled to walk was provided with assistance by election officials who brought the ballot papers to her in the waiting area.

At Nomzamo Park Community Hall in Orlando East, there appeared to be more people coming out to vote. Residents told Daily Maverick that their frustration with the electricity issue would influence who they voted for. They said that for them, this meant giving other parties a chance.

Prince Silela from Orlando East said, “The ANC has failed to give us jobs. Tenders are going out all the time but we don’t have jobs. The ANC has been voted into power since 1994. We should all be greatly alarmed that in all this time they have failed, and they keep lying that they will do better. I will not vote.”

Tsolofelo Maqabuka, a resident of Orlando West, said, “I will vote because my vote counts. If I vote I can hold officials accountable if they fail to deliver.”

Local resident Nosipho Kekana said, “I am voting because I want to see the changes and employment opportunities that we as the youth of Nomzamo have been promised.

“Being able to vote today means I have a say in our democracy, not just for me, but for every other young person. Young people do not generally like voting. They feel like it’s an old people’s thing… they complain about things going wrong, but are not using their voices to affect the change they want to see.

“With this vote, I want to be heard and my needs and wants catered for.” DM