‘It is in God’s hands,’ NMB mayor Nqaba Bhanga says as battleground voting starts in municipalities 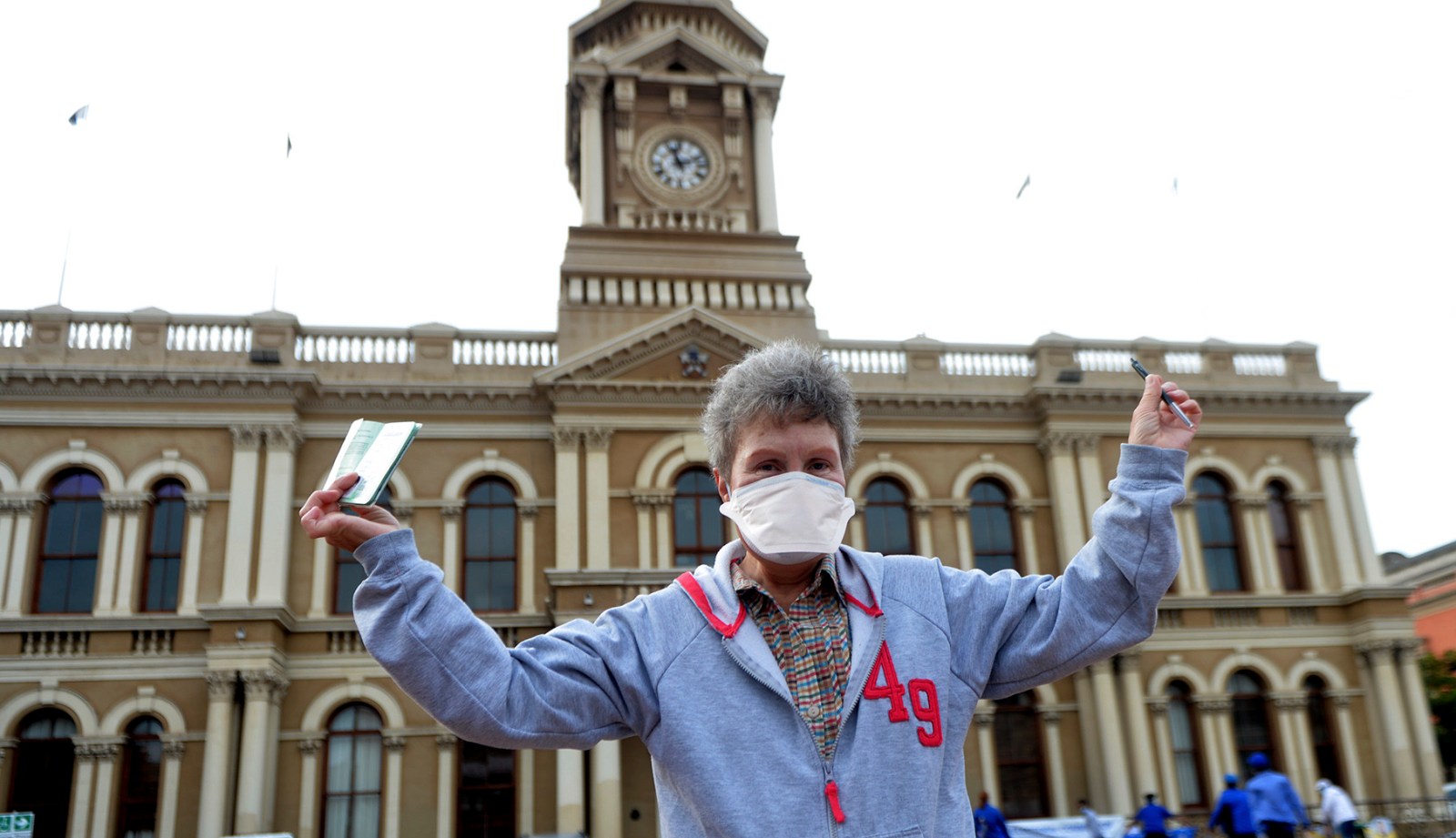 Ansie Potgieter was the first voter at City Hall in Gqeberha in the Eastern Cape on Monday, 1 November 2021. (Photo: Deon Ferreira)

Nelson Mandela Bay mayor Nqaba Bhanga said the results of the election were now in God’s hands as he cast his vote in the battleground metro on Monday morning. The politically unstable metro has been governed by a series of coalition governments since a narrow DA victory in 2016. Elsewhere, residents in long queues said they were ‘gatvol’ with the lack of service delivery as two of the province’s most beleaguered municipalities, Enoch Mgijima in Komani and Makana Municipality in Makhanda, also faced crucial votes.

An upbeat Bhanga talked about potholes and fixing roads as he stood in line with a few other voters at Ebongweni Primary School in Kwazakhele.

There was a festive atmosphere at the school where party agents had set up shop on the pavement and were dancing to music together, joking and laughing to stay warm as they braved stormy winds and cool temperatures.

Voters were given chairs to ensure physical distancing and officials were sanitising people’s hands. Mostly pensioners and the elderly arrived early to vote.

“I am confident. We are aiming for 50% plus one in Nelson Mandela Bay,” the mayor said. “It would be good to finish some of the projects that we have started.”

The DA has had the majority of votes in a coalition government. Bhanga said he hoped they could carry on with their work.

“I am not nervous. This is the day the Lord has made. I am grateful. It is now in God’s hands,” he said. He said he was satisfied with the special voting procedures over the weekend.

After voting Bhanga was off to the ribbon-cutting ceremony at the new Debonairs in Despatch.

DA national leader John Steenhuisen was due in the city on Tuesday afternoon and the chairperson of the party’s federal council, Helen Zille, was conducting oversight visits to voting stations since early morning.

“I think we have managed something special,” he said. “We have opened the narrative about this broken city and the impact that it has on children. That makes it worth it.”

He was positive that his party would at least win some seats in the council.

Voting stations in some areas were quiet in the early morning, with about 100 people voting in the first two hours, but in the traditional DA strongholds, Nelson Mandela Bay’s suburbs, long queues formed early.

Just over 500,000 people registered to vote in the metro.

In the Enoch Mgijima Municipality, based in Komani, there were long queues at some voting stations while at others a few people popped in to cast their votes.

In the Newvale area in Komani people started queuing from 6.30am, waiting for the voting station to open. After 8am there was still a long queue, which continued to grow.

Residents of suburbs started queuing outside Queens College Junior at 6am. A long queue snaked outside the school premises. The former Ward 10 councillor, Tokkie Deysel, said the number of people who came to the station shows that people are “gatvol”.

Owner of Twizza and Crickley Dairy Ken Clark said Enoch Mgijima Municipality is on the verge of collapse, if it hasn’t collapsed already.

“They are not rendering the services they should, as a result the town is a mess. Infrastructure is degrading at an alarming rate and that is what prompted me to stand as a councillor candidate and mayoral candidate,” he said.

Clark said Enoch Mgijima is the ninth-worst municipality in the country.

“We need to increase the revenue base and make sure that we collect all the monies due to us. Then cut costs as much as we can to make sure there is as much money as possible to spend on service delivery. Make our town investable again – we want to make this town decent so that it attracts investors.”

Clark said this may take a little while, “but I think we are going to see change”.

“We have 20 candidates contesting all 34 wards in Enoch Mgijima. Some are contesting two wards and I am confident that we will get some wards and PR councillors.”

Mlungisi resident Bonke Mfenqe said the situation in Komani is not right as there is no service delivery.

“We have potholes, electricity problems and no service delivery, especially in Komani. The problem here started in 1996 and has been slowly killing the municipality until the municipality collapsed,” he said.

He said political leaders are focusing on factions rather than bringing services to the people.

“As much as I don’t have hope in the current leadership, I still believe that by voting for your choice we will make a difference in the end.”

Only a miracle will save Enoch Mgijima Municipality, Mfenqe added.

In Makhanda most voting stations opened on time, give or take 20 minutes, with at least two experiencing challenges with the voter management devices (VMDs). At Ward 9’s voting station, Nombulelo Secondary School in Joza, there was a delay in getting ballot boxes and the staff register. However, voters waiting outside were unfazed by the delay when the IEC presiding officer spoke to them, and waited patiently for about 20 minutes while the glitches were sorted out.

Leader of Makana Independent New Deal (MIND) Jock McConnachie complained to officials that a defective scanning machine at the public library voting station in Ward 8 was causing unnecessary delays. He said that the station was taking almost an hour to process 20 people.

The Recreation Hall on Albany Road is the voting station for residents recently incorporated into Ward 4 – a traditional DA stronghold. They and the ANC are keenly keeping an eye on this ward to see if a changed demographic will change its political leaning. Representatives of both parties were there bright and early. The newcomer Patriotic Alliance was not to be seen. Ward 4 is one of two wards where they have fielded candidates.

Despite one or two early glitches, and strong rivalry – particularly between the ANC and newcomers the Makana Citizens Front – the mood in Makhanda remained calm and on Monday morning voters were steadily and enthusiastically making their way to voting stations across the town. DM/MC