Dissecting democratic dividends: Sudan’s coup is all about the military 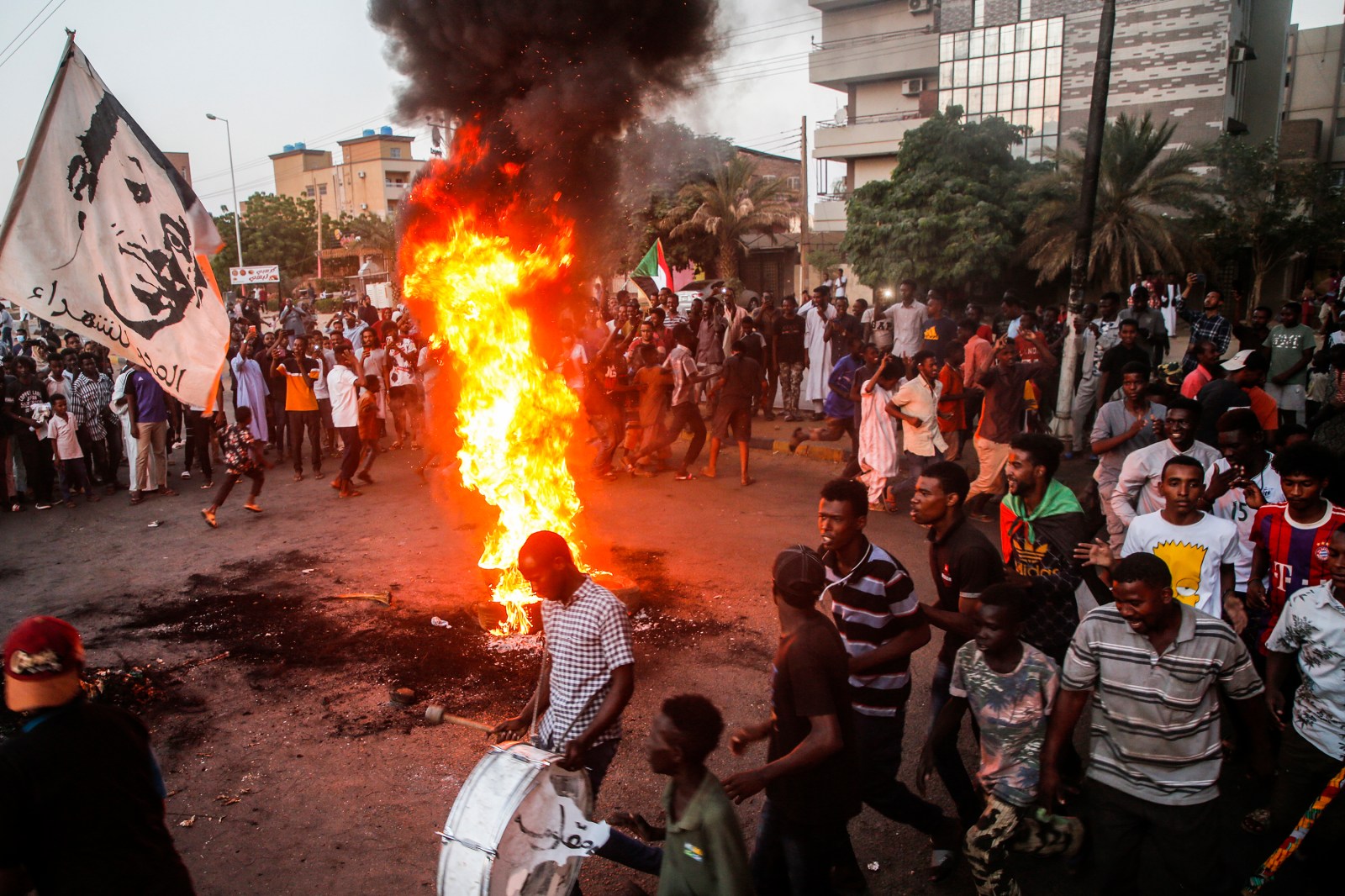 Sudanese protesters chant slogans next to burning tyres during a demonstration in the capital Khartoum, Sudan, on 26 October 2021. (Photo: EPA-EFE / MOHAMMED ABU OBAID)

The recent coup in Sudan may have dashed the hopes engendered by one of the most promising democratic movements in recent history. It shows that the military cares about one thing only – itself.

Military coups are making a big come-back in Africa. After a steady decline this century, there has been a sudden spike, with five putsches in just over a year: two in Mali; one in Chad; one in Guinea; and now Sudan on 5 October. Armed forces commander General Abdel Fattah al-Burhan, the joint leader of the military-civilian government in Sudan, arrested the government’s civilian leader Prime Minister Abdalla Hamdok and other civilian leaders and suspended the transitional government.

Burhan’s drastic move may have dashed the hopes engendered by one of the most inspiring and promising democratic moments in the continent’s recent history when in April 2019, after months of large popular streets protests in Khartoum  and with a push by the military, long-time President Omar al-Bashir’s regime was finally toppled.

Protest leaders and the military then negotiated a transitional government in which they would share power until democratic elections in 2023. Under the agreement, Burhan was meant to hand over leadership of the overarching Sovereignty Council to a civilian leader in November.

The protesters, led by the Sudanese Professionals Association and Forces for Freedom and Change (FCC), were back on the streets this week to oppose Burhan’s betrayal of a transitional government he had helped to negotiate and vowed to uphold. But the military seems unrepentant, using live ammunition and killing at least 10 protesters this week, according to media reports.

Africa and the wider international community also condemned the coup. An emergency meeting of the African Union’s (AU’s) Peace and Security Council suspended Sudan under the organisation’s rule against “unconstitutional changes of government”.

AU Chair Moussa Faki Mahamat demanded the release of detained political leaders, strict respect for human rights and the resumption of negotiations between the civilians and military on the transition.

The US suspended $700-million in aid and the World Bank also suspended its aid. World Bank president David Malpass warned the coup could have a “dramatic impact” on the country’s social and economic recovery. The International Monetary Fund seemed to contemplate similar action. The EU warned the new regime faced “serious consequences”, including withdrawal of financial support. The United Nations and the Arab League say they are “concerned” about the takeover, calling on “all sides” to respect the 2019 accord on the transition.

Andrews Atta-Asamoah, senior researcher at the Institute for Security Studies (ISS), sees this strong reaction as evidence that Burhan has badly misread the mood of the Sudanese people, the international community and the strength of their commitment to the Sudanese transitions.

He noted that the tensions within the transitional government had been growing for some time. They had become evident with protests by different factions and had partly erupted on 21 September with a coup attempt, aborted at the last minute.

Burhan and other military and civilian leaders had been meeting the US Special Envoy for the Horn of Africa Jeffrey Feltman before the 25 October coup to iron out these differences. Some saw the 21 September events as a “military dress rehearsal for a coup”. That assessment may have been right.

But Atta-Asamoah said the emergence of pro-army protests at that time as well as anti-government protests in eastern Sudan and splits within the FCC civilian front should not have been taken as signs that the majority of Sudanese would accept a return to military rule. They remained opposed to it.

He also suggested the coup could cause a split in the military and even a countercoup.

The latter may yet happen, unleashing an even more uncertain future for Sudan. But that Burhan cares very much about the mood of the people or a violent unravelling of the democratic transition is doubtful. He justified his actions as an attempt to protect the country by preventing a civil war. He claimed he would appoint a technocratic government to run the state until the scheduled elections in 2023.

And the military leadership has recently complained of increasing economic hardship in Sudan and blamed the civilian leadership – which controls the economic aspects of government – of mismanaging the economy.

But these are the promises and justifications of military officers after they seize power. And recent events give reason to suspect the military acted instead to protect its own interests. The timing of the coup suggests that Burhan was concerned about handing over power to a civilian for the second half of the transition, without guarantees that military interests would be protected.

Burhan and the military appear to have been worried about the work of the committee tasked with recovering state assets from members of the Bashir regime. In Sudan, the military had and continues to have extensive economic interests. Burhan and his fellow officers were also concerned about the transitional government’s decision to surrender Al-Bashir to the International Criminal Court (ICC) to face charges of war crimes, crimes against humanity and genocide against the people of Darfur.

Though Burhan and the military leadership were quick to sacrifice Al-Bashir to the revolution in 2019 to save themselves, the transitional government’s decision to cooperate with the ICC may have been a bridge too far for them, apparently sparking fears of a wider witch-hunt against military officers.

Atta-Asamoah suggests that the AU’s reaction to recent coups has not served as a deterrent. At a recent ISS webinar – before the Sudan coup – senior ISS researcher David Zounmenou said the AU’s inconsistent application of its rule against coups was partly why this measure was not deterring coups.

He cited the sharp difference in approach towards Mali – suspended from the AU and Ecowas after the 2020 and 2021 coups – and that towards Chad, which was allowed to remain a full AU member, pending a promise by the coup leaders to transition to elections and civilian rule.

Coups are never a good idea, even if some may be more justifiable than others. But in Sudan’s case, the blame seems to be heavily weighted towards the military side. Hamdok has been criticised for being too consultative – and therefore indecisive – and this may have slowed the reforms that were necessary to turn around the economy, which had stagnated under Al-Bashir.

So the democratic dividend was not fully forthcoming economically for ordinary Sudanese. But this could hardly justify a coup. And there are no indications that the management of the economy will be any better under a military government.

But that was probably not the objective. The military was most likely very narrowly focused on its owns interests. And to hell with the rest. DM168