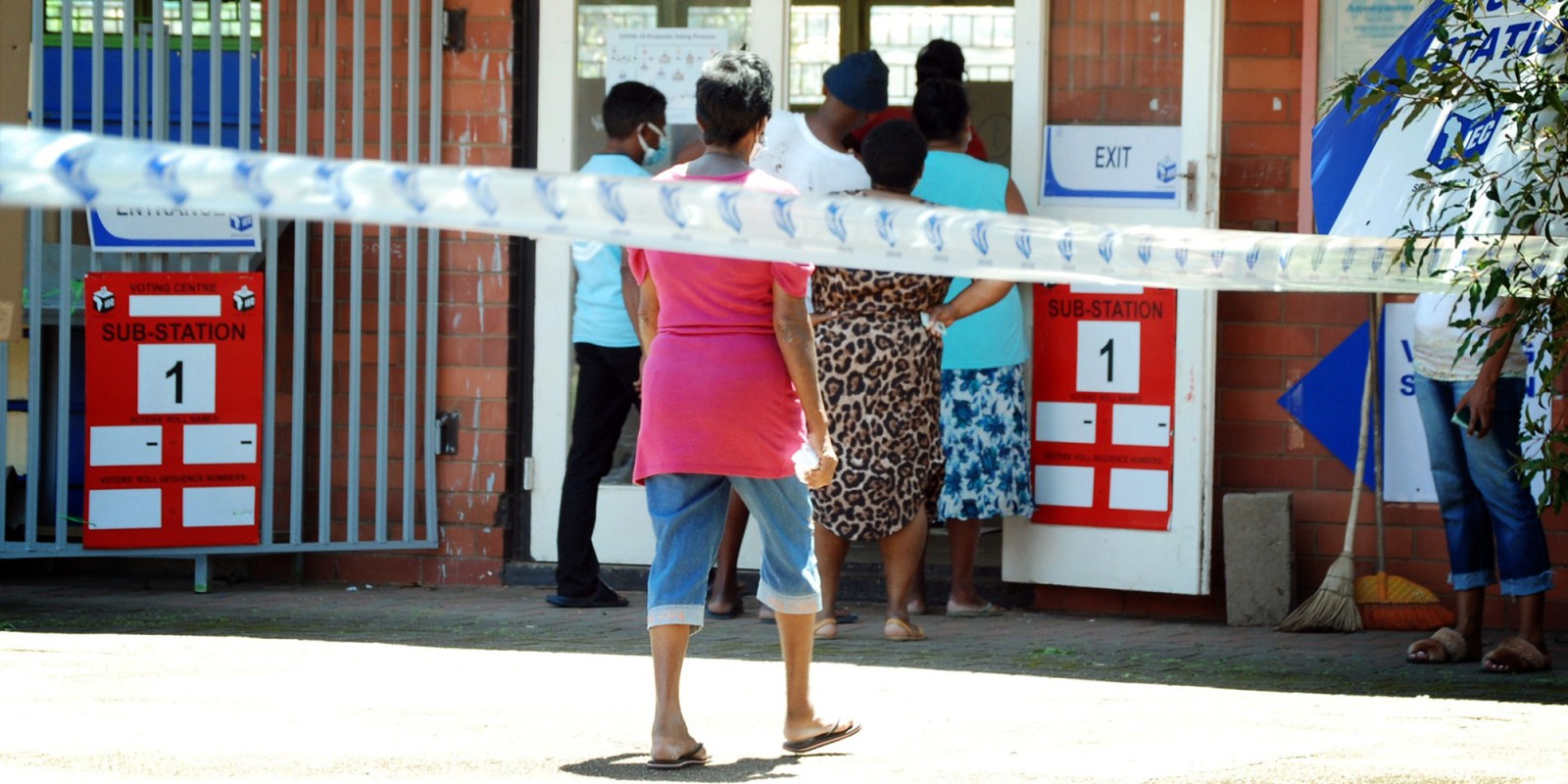 Community members line up to vote at Highstone Primary School in Phoenix, northern Durban, in KwaZulu-Natal during the local government elections on 1 November 2021. (Photo: Phumlani Thabethe)

It was nearly five months ago that deadly violence rocked the suburb of Phoenix outside Durban during the July unrest that devastated parts of the province. Today, people were out to cast their ballots.

It was mostly people from nearby Inanda, KwaMashu, Bhambayi and Ntuzuma who bore the brunt of the violence that erupted in Phoenix over several nights in July.

At least 36 people were killed. Some were shot or hacked to death while others were set alight in their vehicles, allegedly by Phoenix residents who claimed to have been protecting their properties from looters.

Religious, political and civic leaders had their work cut out for them as they tried to contain angry communities who threatened to go to Phoenix and avenge the deaths.

Tensions were raised recently when the Democratic Alliance put up posters in Phoenix that said, “The ANC called you racists” and “The DA calls you heroes”.

Critics said the posters were insensitive to the families of those who had lost their loved ones during the Phoenix violence. The uproar forced the DA to remove the posters and apologise.

These and other issues simmered beneath the surface as people in Phoenix came out to vote in local elections today.

Mashooda Hoosen, a 34-year-old housewife, was upset because she had been turned away at a voting station near her home and told to go to the Highstone Primary School voting station in Ward 51 in Phoenix’s unit 20.

“I am voting for a party that will guarantee me, my family and our community security. People say there is racism in Phoenix… there is no such thing. We live peacefully with our African neighbours. We cook food and we all share. In my opinion, the people who looted here and some community members got together to stop the looting. I think the deaths were exaggerated.

Nombuyiselo McMinn (48), from Bhambayi’s Geneva section, cast her vote in Phoenix. She said there was still racial discrimination in the predominantly Indian suburb.

“There is no peace here… blacks are still suffering and Indians treat us like trash. Our people are being victimised as I’m talking to you. Some people were affected by the new demarcation and they have registered here but their names are not here. If you’re Indian you’ll be given a form to fill in, but if you’re African, you will be sent away.”

Alan Kemraj, the presiding officer at the voting station, said: “Some people here are complaining that they don’t appear on the voters’ roll. We are explaining the situation to them, but they accuse us of being biased towards the DA. But that is not the truth. We are assisting all political parties here without fear or favour.”

We spoke to local residents who had gathered across the road from the voting station. They told us that five members of one family had died in a house fire on Sunday night. Neighbours said a 57-year-old man had burnt down the apartment where his family was sleeping. The man has been arrested.

“We heard screams… we tried so hard but we couldn’t save the members of the family,” said Sagren Moodley.

Meanwhile, voting progressed smoothly at the Fernville Primary School polling station. Morgan Chetty, a 52-year-old unemployed welder, said he “dragged” himself to the school even though he felt the parties listed on the ballot paper wouldn’t change anything.

“I don’t have many expectations. I think they should change the system. The municipality is giving us very bad services… most of the time there are no lights on the roads, the crime is high. People are getting paid fat salaries at the municipality but they don’t want to do the real work.

“People who are really working hard, who are deserving of their salaries, are people working for private companies and contractors. They do real work while the municipality people are sitting the whole day,” he said.

Sera Khan, a 76-year-old pensioner, struggled to walk to the voting station at Redfern Primary School. She said she decided to vote so that her family and her community could get better security.

Mishal Sudamma, the 43-year-old IFP candidate for Ward 52, credited Mangosuthu Buthelezi – who visited Phoenix recently and praised those who banded together to defend their properties and businesses during the July unrest – for bringing about peace between Indian and African communities.

“He is the one who ended the violence after speaking to the nation and condemning the looting,” he said. “The people of Phoenix have deep respect for Prince Buthelezi and the IFP. I’m hopeful this respect will turn into votes. We have done good groundwork in this ward and I am hopeful that the people around here will vote for me.”

Christopher Danisa, a 74-year-old pastor who was queuing to vote at  Inanda Combined School, said that as religious and community leaders, they had worked tirelessly to defuse tensions between Indian and black African communities.

“It was not easy. People here were very angry and wanted revenge for those deaths. We prayed hard and worked hard to pacify these communities. We pleaded with them, we softened them. As time went by, we managed to win them over,” he said. “Now there is peace.”

Some residents of the nearby Bhambayi settlement said they had not forgotten what happened in July, and that they travelled through Phoenix with trepidation, afraid they might be attacked again.

Bhambayi resident, Colonil Shezi, said there was still no peace between Bhambayi and Phoenix communities after the violence in July.

“We are still angry and hurt, but due to poverty and a scarcity of jobs, we are forced to go to Phoenix. I have to collect my medication at Phoenix clinic. Every time I’m there, I am scared of Indians. We don’t know if they will attack us again,” said Shezi.

Wayne Sussman, an independent political analyst, said it was hard to predict which way the Phoenix vote would go.

“Phoenix has traditionally been a Democratic Alliance stronghold. But this time around, it is hard to tell. This is because there are many small Indian-focussed political parties. We don’t know how much these parties will eat into the DA’s support base,” he said. DM