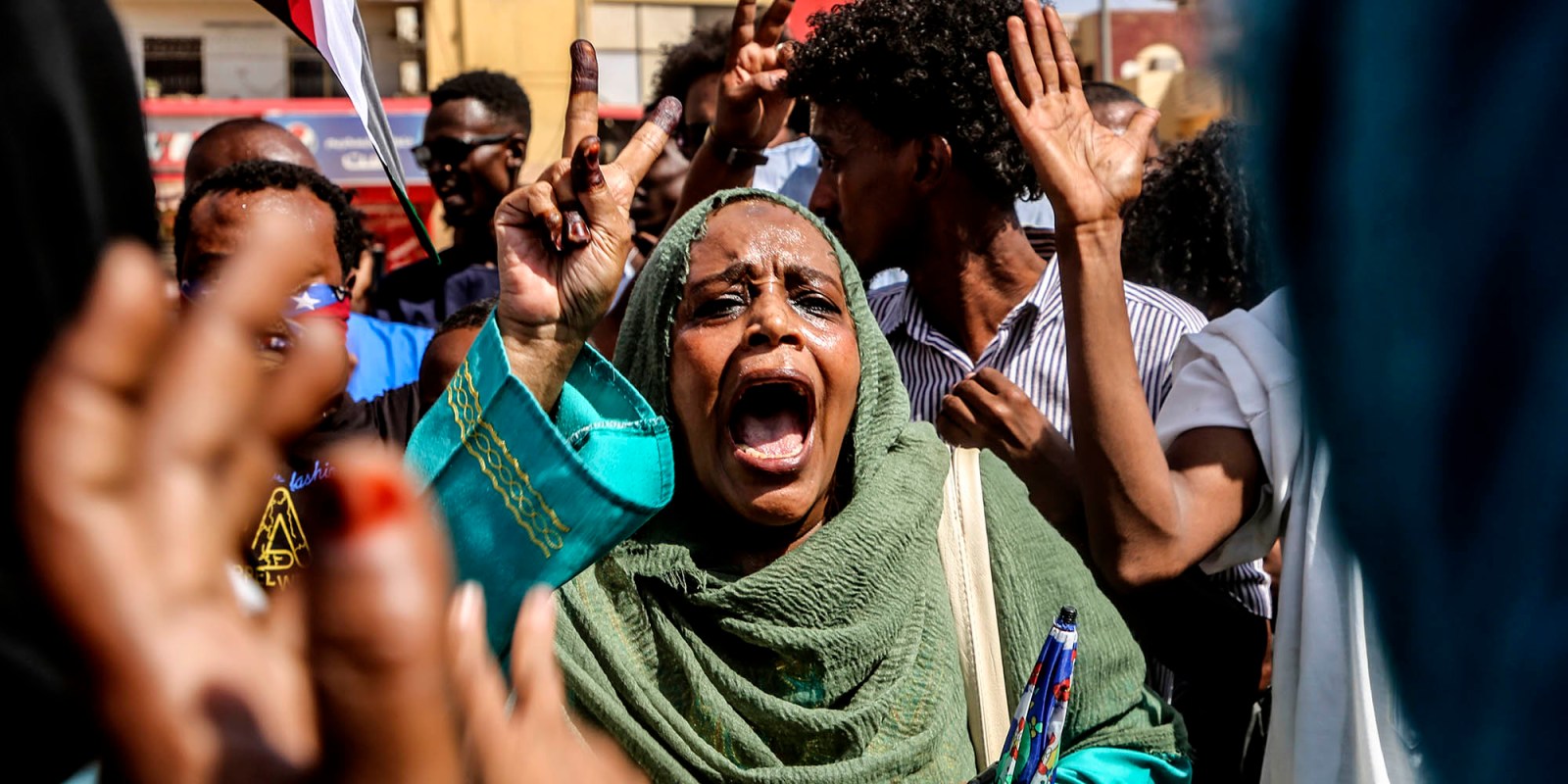 Thousands of people shouted slogans and held national flags in Khartoum, Sudan, at the weekend during anti-coup protests after the military took over the government on 25 October. (Photo: EPA-EFE / STR)

The Central Committee of Sudanese Doctors reported that three protesters had been shot dead by security forces in the capital Khartoum’s twin city of Omdurman and that 38 had been injured, including some by gunfire.

A weekend of mass protests against the 25 October military coup in Sudan left several more pro-activists dead, as the military showed its determination to stifle another popular uprising like the one which toppled longtime autocrat Omar al-Bashir in April 2019.

Disturbing videos were circulated on social media showing what seemed to be soldiers firing machine guns mounted on pickups into protesters. Some activists reported that “dozens” had been killed by these soldiers. However, Daily Maverick could confirm neither the authenticity of the videos nor the claimed death toll. Most media reported that three protesters were confirmed killed in Saturday’s mass protests and another on Sunday.

The Central Committee of Sudanese Doctors, which has been monitoring the protests, reported that three protesters had been shot dead by security forces in the capital Khartoum’s twin city of Omdurman and that 38 had been injured, including some by gunfire.

“A representative of the military was not immediately available to comment,” Reuters said.

Other local media reports said that one person had been killed in protests in Khartoum on Sunday. Even before the weekend protests, the AFP news agency had quoted unnamed US officials as saying that 20-30 protesters had died since last Monday’s coup.

Demonstrators, mostly organised by neighbourhood resistance committees,  have gone out on the streets every day since General Abdel Fattah al-Burhan, the chairperson of the joint military-civilian transitional Sovereign Council, ousted Prime Minister Abdalla Hamdok and his Cabinet last Monday, 25 October, dissolved the transitional government and declared a State of Emergency. Burhan has said he removed the Cabinet to avert civil war after civilian politicians stoked hostility to the armed forces.

However, analysts have noted that Burhan toppled the Hamdok government shortly before he was supposed to transfer the chair of the Sovereign Council to a civilian leader, suggesting that the military was simply not prepared to give up power.

Under the transitional arrangements agreed between the military and civilian protesters after the toppling of Al-Bashir, Burhan would first chair the Sovereign Council and then hand it over to a civilian chair until elections scheduled for 2023.

Burhan has given assurances that he is still committed to the transition to civilian rule and the 2023 elections and has said that he intends to assemble a transitional government of technocrats to run the government until then, alongside the military.

He has also said he would like Hamdok to return as prime minister of this government. But the pro-democracy activists are clearly not convinced and have been turning out in large numbers, mainly in Khartoum, and Omdurman, on the other side of the Nile River, to demand that the military restore Hamdok’s government.  They have urged him not to accept Burhan’s offer.

UN Secretary-General Antonio Guterres tweeted that, “We witnessed on Saturday the courage of so many people who peacefully protested military rule. The military should take heed. Time to go back to the legitimate constitutional arrangements. Reports of violence are alarming and perpetrators must be brought to justice.”

Jonas Horner of the International Crisis Group (ICG) has said the Sudanese military has misunderstood the will of the Sudan “street” to return to civilian rule and that this will be to its detriment. He believes Burhan has been badly advised by regional powers supportive of military rule in Sudan — an apparent reference in particular to Egypt, the UAE and Saudi Arabia — but that the military was also uneasy at the prospect of transition.

The ICG said in a report last week that Burhan and the military had much to fear from transferring the chair of the Sovereign Council to a civilian — which would have been the first time in decades that a civilian had headed Sudan’s government.

“Under Bashir, the generals came to enjoy unchecked control of key economic sectors, running a web of companies with billions of dollars in assets.

“The Hamdok administration had sought to roll back these privileges by bringing many of the military’s companies under civilian management,” said the report.

It added that the Hamdok government had begun to recover public property grabbed by former high-ranking officials. The report noted that the generals were worried that greater civilian control of the transition would lead to a more vigorous prosecution of crimes committed by the military in trying to defend Bashir against the popular uprising against him in 2019.

Despite the opinions of analysts like Horner that the military has miscalculated the determination of ordinary Sudanese to restore the Hamdok government, it is not at all certain that the military will budge, given the amount it has to lose by doing so.

And it’s also not clear if the international community has the will and ability to apply enough pressure for it to do so.

The African Union has suspended Burhan’s military government under its rule forbidding unconstitutional changes of government. The UN Security Council has condemned the coup and demanded a restoration of civilian rule — though its statement was rather diluted at the insistence of Russia and China.

Sympathy protests have been held in foreign countries including the US and Canada. US President Joe Biden has described the coup as a “grave setback”, and the US and the World Bank have suspended financial aid, while the European Union has threatened to do the same. But whether this will be enough to persuade Burhan to reverse course is uncertain.

Hamdok’s approach may be key to where Sudan goes next.

On Sunday, Volker Perthes, UN Special Representative to Sudan, told journalists that he had met Hamdok, who remains under house arrest under armed guard by the military junta.

“We discussed options for mediation and the way forward for Sudan,” Perthes said. “I will continue these efforts with other Sudanese stakeholders.” DM