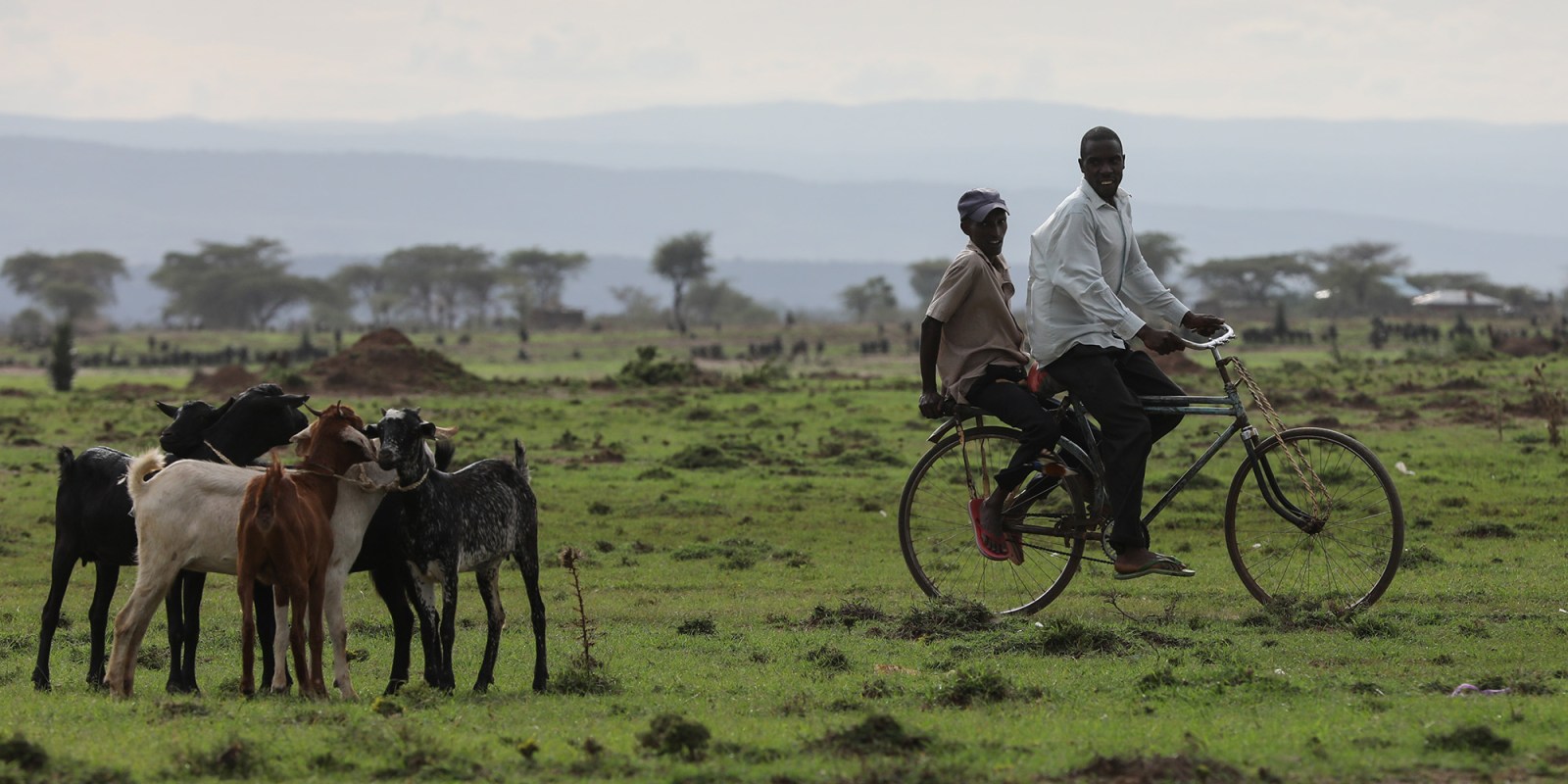 Kenyan men ride on a bicycle as they head back home after attending a goat auction at the Banita livestock market, ahead of Easter celebrations in Nakuru, Kenya, on 28 March 2018. (Photo: EPA-EFE / DANIEL IRUNGU)

New findings from the International Livestock Research Institute show that unless massive adaptation measures are put in place the number of extreme heat events driven by climate change – especially in Africa’s tropics – will increase.

Poultry and pigs already face major heat stress challenges in many regions of the tropics where they are currently raised. The same is true for all five major domesticated species in large swathes of west Africa, where heat stress is likely to make it nearly impossible for livestock to be kept outdoors.

Heat stress is likely to be only the beginning of the problems. Not enough is known about likely future effects of increased climate variability on feed and forages, grazing area and water, or about shifts in climate-sensitive diseases and disease vectors and their impacts on livestock.

Even under relatively mild but realistic climate scenarios, it will be necessary to reconfigure and relocate agricultural systems. This will have profound consequences for people’s nutrition and wellbeing. Livelihoods will be threatened. The livestock sector contributes about 30-50% of agricultural GDP and supports the food security and livelihoods of about one-third of Africa’s population, or about 350 million people.

Livestock tends to be viewed merely as part of the climate change problem. Research focuses on mitigating the harm that livestock causes. Some of these harms are very real: livestock emissions, particularly from cattle, are responsible for a significant fraction of the gases that contribute to global warming worldwide. But sub-Saharan Africa accounts for only a small part of those emissions.

In the developing world, these harms are more than balanced by the good they do. Livestock provides livelihoods, nutrition and cultural capital. How, then, do we adapt to the challenges the sector faces and capitalise on the opportunities it presents?

The UN climate change conference, or COP26, in Glasgow offers an opportunity to highlight these problems – and to put forward solutions.

Projections show that, in the coming years, heat stress in animals will occur more frequently and for longer periods. This will affect milk and meat productivity for cattle, small ruminants (like goats and sheep), pigs and poultry across east Africa. This will make much of the region unsuitable for exotic pig, poultry and cattle production – animals whose productivity is easily compromised by heat stress.

In Uganda, heat stress levels are high and increasing. By the end of the century over 90% of Ugandan districts will experience severe heat stress, putting the livelihoods of pig producers and sustainability of the pig sector as a whole at risk. The pig sector provides a source of income to more than two million households in Uganda, and the country has the highest per capita consumption of pork in east Africa.

The International Livestock Research Institute has started to address these risks in various ways.

In Ethiopia’s arid Afar region, pastoralists are experiencing increased flooding and drought and an overall shift in seasonal weather patterns. In response, they are shifting from large to small ruminants and changing their grazing and feed management systems.

In Kenya’s central Rift Valley, farmers who practise mixed crop and dairy farming have begun to experiment with different feed production and preservation strategies to overcome feed shortages in the prolonged dry seasons.

But this is a fraction of what is needed. More must be done to work with governments and help livestock keepers across the continent meet the challenge of adaptation.

Building climate-resilient livestock systems to cope with these challenges requires concerted, coordinated action from investors and policymakers at the national and global levels. This will need to be informed by a solid research base that scientists have only started to assemble with the minimal funds allocated so far.

Unfortunately, because of donor priorities, most research attention to date has focused on mitigating the contributions of livestock production to climate change rather than adapting to its consequences – even though the priority in African countries is adaptation. Where there has been adaptation research, it has focused primarily on climate-induced impacts on cropping systems rather than on livestock.

Researchers need to develop a toolbox of effective adaptation practices, technologies and policies that are robust across different scales, priorities and climate futures. They must also work with funders and governments to prioritise investments in the livestock sector. It’s not just technical inputs that are needed, but institutional change in the way that livestock are viewed by funders and governments. This will require a considerable evidence base.

Unfortunately, we are very far from these goals and not nearly enough resources are being devoted to achieving them. Consider that between 2012 and 2017, US$185.8 billion was dedicated to climate-related development projects worldwide, with only 0.57% (about US$1 billion) devoted to the livestock sector.

The cost of livestock mitigation and adaptation actions for the next five years is estimated in the billions of dollars, much of that to be supported by partners in the form of finance, technology development and transfer and capacity building.

COP26 provides a rare opportunity to address some of those funding gaps. To protect Africa’s livestock and the millions who rely on it, the time for action is now. DM/OBP

by Polly Ericksen and Laura Cramer for The Conversation, Daily Maverick
October 31, 2021