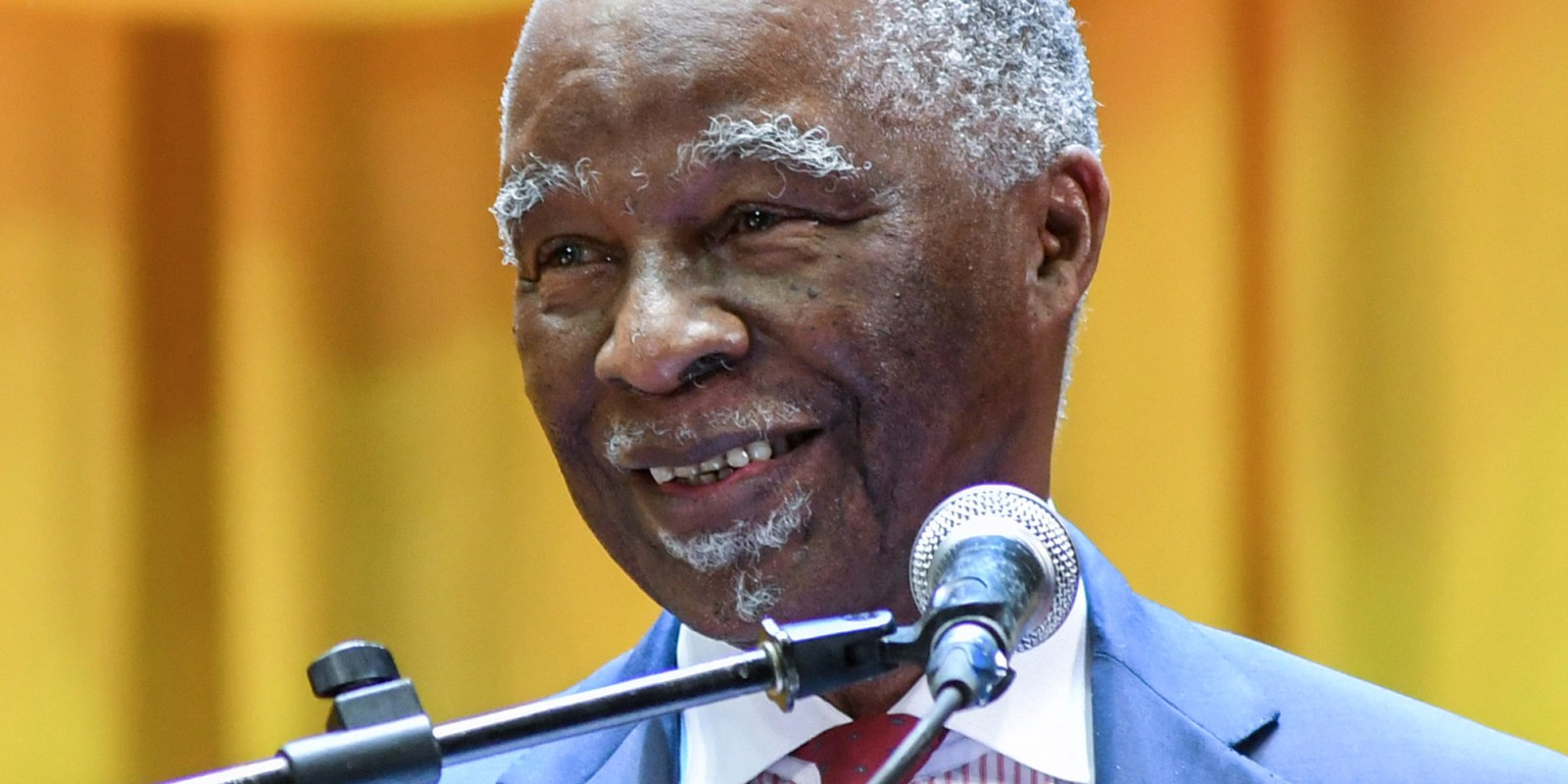 ‘We must say to the ANC, this is what you promised in your manifesto… and social partners have already produced a vision and a plan [to rescue the economy],’ Mbeki said.

Former president Thabo Mbeki said on Thursday night that a social compact should be agreed upon and implemented to eradicate poverty, inequality and unemployment in South Africa.

Importantly, this should be done in the form of a commitment — that demands results — instead of a promise, he said.

“This social compact that must produce this plan to eradicate unemployment, poverty, and inequality… some things have already been done. What is outstanding is that the social partners must get together to say, ‘We have some vision of where we want to go, and let’s make this into an implementable plan.’ That is what is missing.”

He referred to the release, in 2020 by Business for South Africa (B4SA), of a 111-page presentation outlining a proposed economic response to the Covid-19 pandemic.

The plan required policy interventions and could increase GDP by R1-trillion, create up to 1.5 million jobs and increase tax revenue by R100-billion per annum.

According to the proposal, the private sector would need to commit funding of R1-trillion. B4SA said if the plan was adopted, GDP would, by 2030, increase from $330-billion to $550-billion, unemployment would shrink to 15%, business confidence would increase 14-fold and global competitiveness would more than double.

Mbeki said this was the first time since South Africa entered its democratic era in 1994 that the meaning of “social partnerships” was realised, when society was “speaking in one voice about one thing”.

It was an extraordinary commitment, he said.

Few would disagree that the South African economy and local government were in a crisis, he said, and that corruption had a direct result on how national resources were being managed.

Such things were included in the election manifestos of almost all of the political parties that he had read, said Mbeki.

“Our economy is in crisis. Those jobs will not come if we don’t attend to the economy. Let me read a commitment which the ANC makes in that regard [in its manifesto]: ‘We must urgently finalise the social compact with the social partners to achieve our social transformation to eradicate poverty, inequality and unemployment’.

“I like to believe this is not a promise, but a commitment. I think all of us have clearly followed developments in the country regarding [the economy]. All of us as South Africans should take this up with the ANC.

“We must say to the ANC, this is what you promised in your manifesto… and social partners have already produced a vision and a plan [to rescue the economy],” he said.

Of the governing party, he said the ANC had long been warned that those joining for obvious self-enrichment should not have been allowed access: “We failed to deal with this problem.”

“These people [eventually increase in number] and they are bound to affect the quality of the party. At Nasrec in 2017, we said there must be renewal, or it will become a matter of life and death for the ANC.

“The ANC understands that if it wants to exist, it must renew itself. That renewal will give us the passion that is needed in governance.

There are commitments that have been made by the ANC… we owe it to ourselves to say that the ANC must live up to those commitments. If the ANC doesn’t correct itself in that context, the country is in trouble.”

Local government had to be approached in a “rational and intelligent way” he said, touching on the District Development Model (also mentioned in the ANC manifesto) which speaks to better coordination between local and district municipalities.

Using eThekwini metro as an example, he said: “Two years ago, in terms of capital budget, something like 43% came from own resources generated by the municipality. Then take the OR Tambo [ORT] District Municipality in the Eastern Cape. For the same year, the same period, the amount of money for capital investments generated from local resources was 1%.

“You can’t conceivably think ORT is going to develop, so what are we going to do? Financing of local government can’t all be the same. One proposal is that the Development Bank of Southern Africa [DBSA] — one of the biggest financiers of local government and metros — should concentrate on these districts that can’t raise the funds themselves.

“eThekwini can issue municipal bonds, but ORT can’t. So why don’t we get the metros to take care of themselves? And resources from the DBSA can go to municipalities that can’t survive.”

More resources were needed to finance development in local municipalities, he said, and citizens had to be informed of what was being done to generate this.

“This challenge to get social partners together is critical to that. As is cleaning up local government. You can generate huge resources, but if you don’t have a value system, those resources will disappear into people’s pockets.” DM