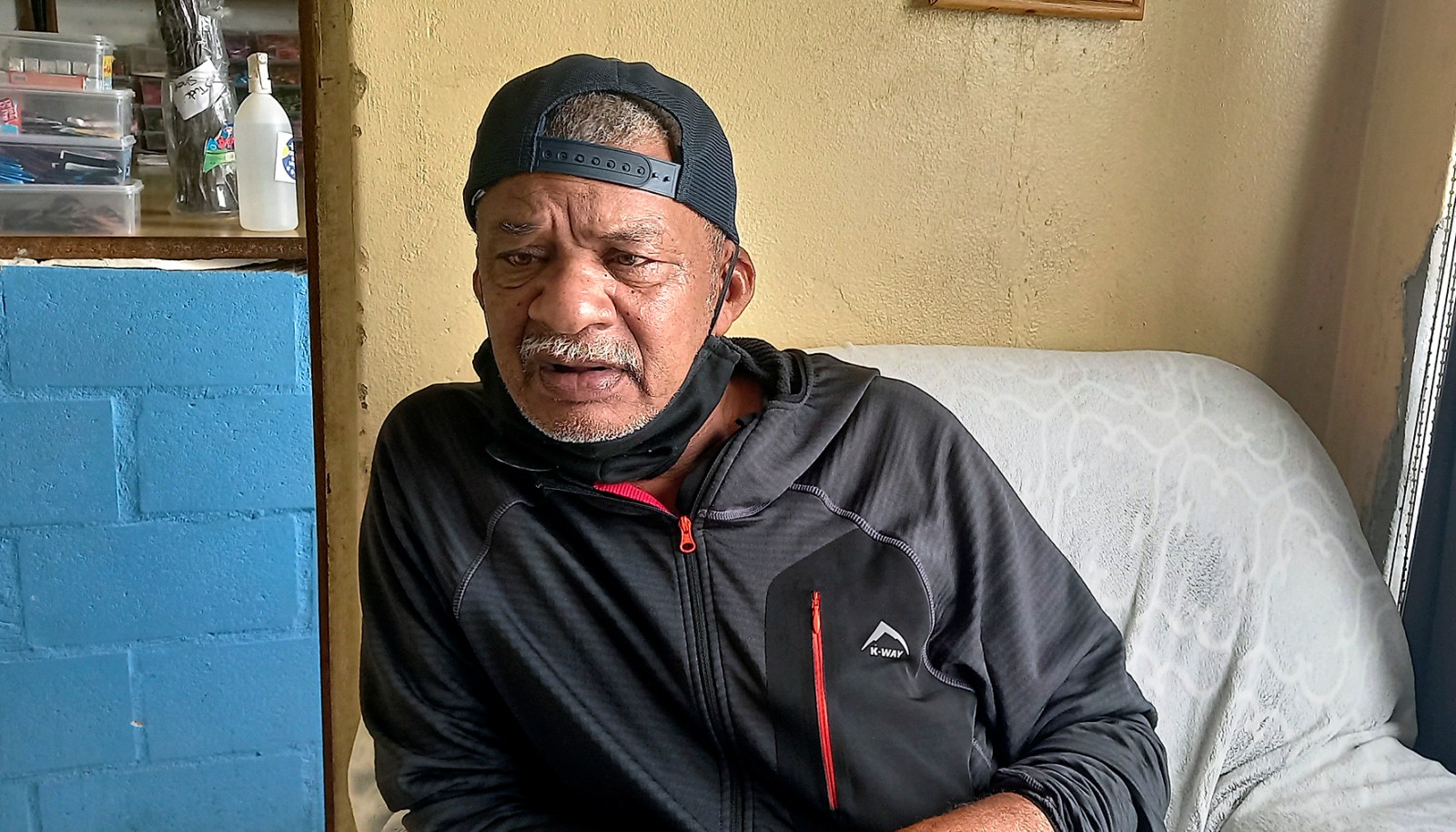 Clive Jordan is a small-scale fisherman in Paternoster in Saldanha Bay, along the West Coast near Cape Town. He says unemployment has forced residents to illegally poach lobsters to make a living. (Photo: Vincent Cruywagen)

Poaching is usually associated with lucrative illegal syndicates in South Africa and the Asian mafia. But in Paternoster along the West Coast, unemployed fishermen say poaching three or four lobsters to put on the table is poverty alleviation.

In the fishing town of Paternoster, learners poach alongside their fathers to make sure they do not go to bed hungry, sometimes facing treacherous waters and risking not returning to shore.

Fishermen’s concerns raised with Maverick Citizen on Wednesday, 27 October come in the wake of the most recent announcement made by Minister of Forestry, Fisheries, and the Environment Barbara Creecy on Monday, 25 October on recent cuts in the West Coast rock lobster (WCRL) Total Allowable Catch (TAC) for the 2021/2022 fishing season.

On the ground, this meant the 78kg allocated for small-scale fishers last year has been cut to 35kg which fishermen see as a slap in the face.

Creecy also indicated she would request the newly appointed Consultative Advisory Forum (the CAF) to review the 2021/2022 TAC process and allocation.

“I’m acutely aware that a large number of people rely on the WCRL resource for their livelihoods and that the current proposed cut in quotas will have a devastating effect on the already stretched incomes following the devastating effect of the Covid pandemic and the impact it had on the export markets for rock lobster,” Creecy said.

She also noted that the WCRL resource is severely depleted and steps must be taken to rebuild the stock for sustainability.

One of the small-scale fishermen, Clive Jordaan, says the announcement is a humiliation to struggling fishermen.

“As fishermen, we started in the interim with more than 200kg and now we stand at 35kg. That… is not enough for any fishing family to survive.

“That’s why so many of us along the West Coast have resorted to getting lobsters illegally… we are not poaching. We see it as poverty alleviation. You cannot say a person is poaching if he catches four lobsters and sells them.”

Explaining the value of 35kg, he said this allocation would bring in about R10,000. The expenses incurred amount to R4,000 including petrol, paying the driver towing the boat to the waters, buying sanitisers and making sure the medical cabin gets the most basic elements, and once every four years there is a spend of R2,000 on flares.

The rock lobster season begins on 15 November and in the months before the season, fishermen play a cat-and-mouse game on the waters, with Sea Fisheries officials chasing them in their rubber ducks.

On Wednesday, around 11am, a boat with six men arrived in the area. They had an illegal catch of lobsters worth R3,000.

One man, speaking on condition of anonymity, said: “This money is split between the boat owner and the two of us. My cut goes home. My father passed away, my mother is only getting a monthly pension and my poaching money helped us to survive.

“There is no future for learners in Paternoster. After school, there is nothing left except to join their dads on the sea.”

On the Paternoster beachfront on Wednesday, some 20 poachers were seen walking openly with at least four lobsters in plastic bags. Every car entering the parking bay is stopped, windows slide down and abalone and lobsters are sold openly. Crayfish are sold at R30 and abalone for about R100.

Interviews with fishermen from Paternoster make it clear that they are willing to risk their lives to go out to sea to get their hands on the lobsters.

The Williams family suffered just such a loss. Angeline Williams said that on 28 July 2017 their cupboards were bare and her husband Micheal, went out to sea — in the middle of winter with treacherous sea conditions.

Williams said: “My husband never returned and 10 days later his body washed up along the beach. I wasn’t working and our son was in matric.

“I blame DAFF for the death of my husband. My husband and other fishermen drowned while they were trying to get food for their families.”

She said that her late husband “was poaching and so are other fishermen in Paternoster. They did it because they don’t have other options because DAFF is busy taking away the food on our tables.”

Fishermen want Creecy to visit the West Coast and witness first-hand the extreme measures they resort to, to survive.

It is not only fishing communities in Paternoster that want a word with Creecy and her department. On Thursday, 28 October, about 200 people from fishing communities across the Western Cape — from the West Coast to the Garden Route — gathered in Hanover Street, Cape Town to march to Parliament to speak to the minister.

Natasha James, an organiser of the march, told Daily Maverick fishing allocations become smaller and smaller while fisherfolk’s “expenses are heavier”. She said fishing communities came together under the banner of “Fishers United” to march to Parliament over issues such as sustainable livelihoods and fishing allocations.

Deborah de Wee from Doringbaai said women don’t have equal rights when it comes to fishing allocations. She said women from her village hardly get fishing quotas and therefore, they wanted the government to provide an equal share of quotas to both men and women. De Wee said when she grew up, women could send their children into the sea to collect mussels if they didn’t have food. “When you as a mother do not have food, you could go into the sea to collect fish,” she said.

Now it is completely different. Women cannot feed their families because their husbands have died at sea or are unable to catch fish due to arrests by police over a lack of fishing permits. “The demand is clear: we are here to tell the government to look after your children,” said De Wee.

If Creecy and her department did not meet the marchers, the women from Doringbaai would withhold their votes in this election, said de Wee.

The group marched to Parliament, led by Reagan James, who shouted, “we want our fair share [of allocations]” over a loudspeaker. The group also shouted, “stop pumping in my ocean, you are killing my livelihood”.

At Parliament, they waited about an hour before Creecy arrived. Pointing at Parliament, De Wee said: “If it is not for our vote, you won’t sit in those seats”. Lorna James, a fisherwoman from Hout Bay, urged communities to work together in the fight for fishing allocations.

The group handed a memorandum to Creecy that made demands including:

“Treat us with respect and dignity — do not talk down to us, do not judge us by the clothes we wear, do not think of us as less than yourselves and always remember that you are in service of our communities and not that the communities are there at your disposal,” said Hilda Adams, a small-scale fisher from Mamre, who read the memorandum.

Creecy accepted the memorandum from the group, but the group shouted with dissatisfaction when she said a review of allocations would be completed only by 10 December. James told Daily Maverick the fishing season was between November and March.

Creecy told the marchers that they needed to organise better among themselves, saying there should not be six organisations fighting for permits. This was “not a recipe for power, it is a recipe for division”. She challenged the group to unite and speak with one voice.

As Creecy disappeared into Parliament with her bodyguards, a woman’s voice among the marchers was heard saying “there was nothing said about women’s rights, but she is a woman”. DM