The banner that rings: Methodist church calls for religious organisations to support vaccination 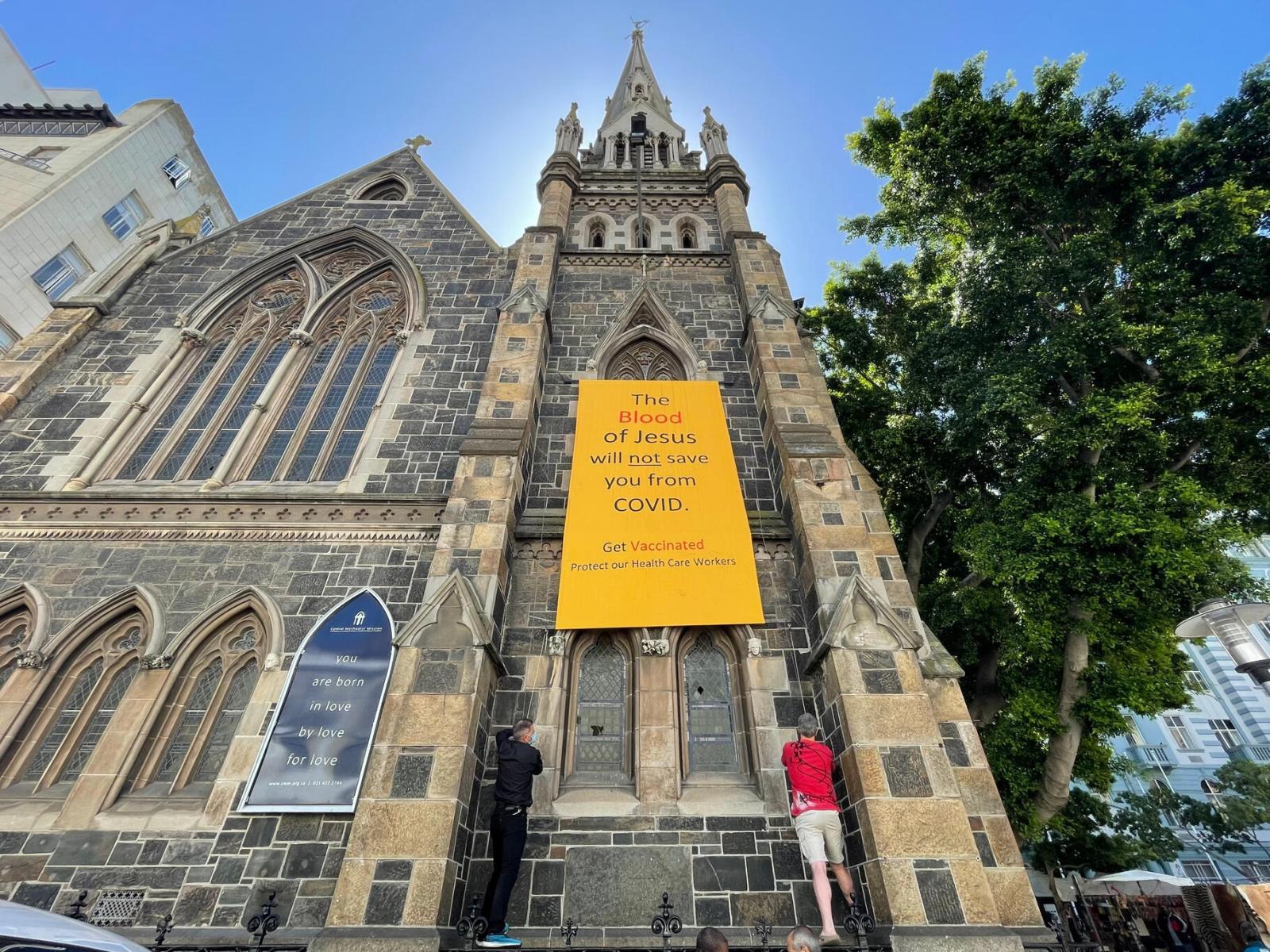 ‘The Blood of Jesus will not save you from Covid,’ says this year’s yellow banner, unveiled on Thursday at Cape Town’s Central Methodist Mission.

This pro-vaccine message is the latest iteration in the Greenmarket Square church’s series of yellow banners.

The church’s Reverend Alan Storey said, “Every single major religion and denomination is pro-vaccinations. Vaccines are safe and effective – they save lives, they reduce spreading, they reduce hospitalisation.

“But there are individuals who are offering a false binary that it’s either faith in God or faith in the vaccine… That logic is quite difficult to counteract, because… it comes across to the people who are holding it that you are persecuting them, which then emboldens them even more,” Storey told GroundUp.

“That’s why it’s so crucial for religious organisations like the church to be the one to counteract this false message.”

Storey said that religious institutions have been doing well to encourage their communities to get vaccinated. “We should be thanking God for the vaccine and everyone that has made it possible. Vaccines are used by God to bring life.”

Storey said that people who are using religious rhetoric to pursue an anti-vaccination agenda are being deceitful. “They’re tapping into a hesitancy, tapping into suspicion and mistrust, and also tapping into this kind of fear that one day we’re going to be persecuted for our faith,” he said.

“The primary tenet of religion – across all religions – is to look after your neighbour, specifically the vulnerable. Some have touted the vaccine issue as an individual issue. We would say no, it’s not an individual issue, because it doesn’t just affect you. It affects the people around you, especially the most vulnerable,” he said.

“We once again invite people to get vaccinated not only to protect themselves but to protect others, especially the vulnerable, those with comorbidities and the aged.”

“There is a bell in the tower that we’re not allowed to ring because it threatens the foundations of the building. This is a way of ringing that bell,” he said.

“These yellow banners are always meant to be the voice of those whose voices are not given platforms and are not heard,” Storey said. In today’s climate, these include health workers who have given their lives fighting Covid.

“It’s the very least we owe to them.”