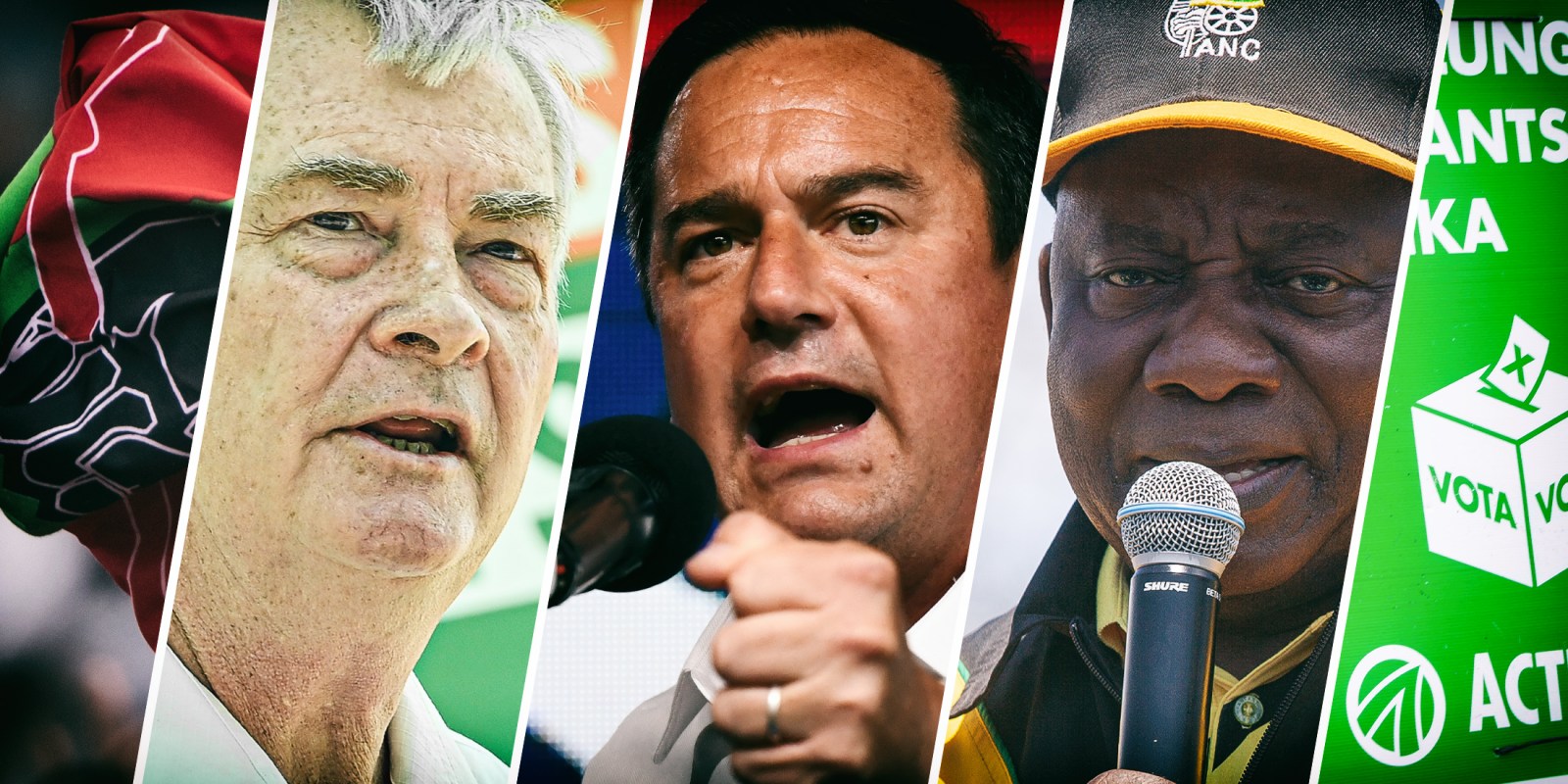 South Africans will on 1 November deliver their verdict on political parties’ apologies, promises and scaremongering. It’s been a low-budget, hard-fought campaign for the attention of potential voters amid sewage-strewn streets, dilapidated houses, rolling power outages and dry taps.

It is voter turnout on the day that’s key, as in South Africa’s system every vote counts — and the polling percentages are set to lead to various permutations of coalition politicking for power.

At least four of the eight metros are set to be governed by coalitions — Johannesburg, Tshwane, Ekurhuleni and Nelson Mandela Bay — perhaps eThekwini too, even though it’s an outlier. That pattern is set to hold true across many of the 205 local municipalities.

The role of independents — at 1,546 almost double the number who stood in 2016– cannot be underestimated, alongside that of community, residents and religion-based municipal candidates, plus newcomers like the Good party and ActionSA.

While the ANC looks set for a national result of just above 50% — it scored 55.68% nationally in the 2016 municipal poll — that support would largely be on the back of support from more rural provinces such as Limpopo, Mpumalanga and KwaZulu-Natal, signalling a further shift in character.

The DA could well be the biggest loser in the wake of electioneering that moved from emphasising how it is getting things done to raising the EFF as the bogeyman radicalising the ANC, and such.

The DA is now pegged at winning around 20% of the vote — a more than four percentage point drop from the 24.57% it clinched in the 2016 municipal poll. Look for some creative maths from DA Federal Council chairperson Helen Zille, who massaged the numbers to turn her party’s loss of nine wards into an increase of support in the November 2020 so-called Super Wednesday by-elections.

The EFF is poised to benefit from an increasingly disenchanted electorate, to whom the party’s jobs and land motto appeals. The EFF, which in its 2016 municipal debut scored 8.3% support, is looking to be kingmaker again, particularly in hung metros.

ActionSA leader Herman Mashaba makes no bones about wanting another stint as Johannesburg mayor, now that he’s shot of the DA. While the party’s own polling of 30% support in South Africa’s economic centre is widely seen as overly ambitious, ActionSA may well make a respectable election debut, possibly nudging into double figures. This would strengthen its hand in coalition talks.

The Freedom Front Plus has been trending up since the May 2019 general elections, after its MP numbers increased from four to 10, and hopes to boost its number of councillors, currently at 83. It’s open to coalitions, as is the IFP, although that party may well decide to take different tacks in KwaZulu-Natal and Gauteng — given the different provincial dynamics for the IFP.

The role of independents or community organisations such as the Makana Citizens Front, which emerged from protests over Makhanda municipal failures, from providing water to removing refuse, can’t be underestimated at a micro level.

Regardless of how messy the coalitions of Johannesburg, Nelson Mandela Bay Metro and Tshwane have proved over the past five years in a toxic mix of economic muscle and political egos, the 2016 municipal poll and subsequent by-elections show the trend is towards coalition.

Any coalition politicking can only unfold after ballots are cast on 1 November.

Electioneering SA-style has a certain rhythm, often accompanied by protests as communities try to make the most of the attention politicians focus on them in a search for votes.

The grim mood has not gone unnoticed by the ANC, which fielded its president Cyril Ramaphosa as the face of the local government poll, banking on his popularity — it outstrips that of his party. Still, Ramaphosa had to tell hecklers to keep quiet — not once or twice, but consistently across various campaign stops.

With apologies for past mishaps and promises of doing better, the ANC 2021 pitch was essentially, “Give us another chance!” This revolves around being able to pull national issues like social grants into the local sphere and hoping that loyalty trumps simmering frustration.

“I wish the Buffalo could find the soldier,” said one person during Ramaphosa’s Cape Town tour, in a play on the president’s Buffalo Soldier nickname arising from his game farming interests.

“We are waging this campaign on a non-existing budget. There’s just no budget at all,” Ramaphosa told ANC supporters in Cape Town’s Rylands Ward 46 on 21 October. “Comrade Mbalula thought there was a certain budget. But there’s no budget at all. The people are the budget.”

ANC elections boss, Fikile Mbalula, also transport minister, sparked controversy after claiming the ANC had a R50-million budget for the 2021 municipal elections. It’s a tiny fraction of the R1-billion the party spent in 2016, according to then elections head Nomvula Mokonyane, although the ANC later somewhat distanced itself from her statement.

In some ways, the 2021 ANC election campaign is a flashback to 2016, when the ANC hit the road “to explain itself” after accepting its then president Jacob Zuma’s apology for the Nkandla debacle following the landmark Constitutional Court judgement in March of that year which upheld the Public Protector’s powers .

That didn’t work then. The ANC dropped eight percentage points in national support and lost control of South Africa’s economic hub, Johannesburg, the administrative capital Tshwane and Nelson Mandela Bay metro. That’s the heart of the Eastern Cape’s economy. Elsewhere, the ANC remained in charge only courtesy of coalitions, as happened in Ekurhuleni and Rustenburg, the main town in South Africa’s platinum belt.

It remains to be seen whether the latest apologetic appeals for yet another chance will motivate ANC voters to cast ballots for the party which, according to a City Press-commissioned poll, just over 60% of supporters themselves regard as corrupt.

The DA’s tightly choreographed electioneering gigs limit potentially embarrassing interjections. Instead, it was a case of scoring own goals — like the Phoenix posters that were roundly criticised as racist and celebrating vigilantism, and as undermining the attempts at reconciliation after mostly black residents from Inanda were killed in Phoenix during the July unrest.

The official line seems to be that this debacle was a storm in a Twitter cup, and has had no impact on DA polling. But the DA’s 20% target is down from actual 2016 performance — a first for the party that touts growth at the hustings as a core indicator of success.

The DA has resigned itself to dropping about 11 percentage points in Cape Town, where, after clinching control 15 years ago, it now holds a two-thirds majority. A mid-50s percentage poll is anticipated.

That lower DA polling will not extract a heavy political price as Cape Town mayoral candidate Geordin Hill-Lewis is the newcomer. A price might be paid later — not just in the metro, but elsewhere in the DA-run Western Cape despite the delivery track record the DA claims where it governs.

Getting things done was a central slogan for much of the DA electioneering, but delivery is skewed to town and suburbia as  GroundUp reports in Witzenberg and Midvaal.

Read: Elections 2021: This municipality is an exception in Gauteng.

When in the May 2019 elections the DA dropped support to 20.77% from 22.23% in 2014, then leader Mmusi Maimane accepted that the buck stopped with him and he resigned. The question in 2021 will be, if the DA comes in below the 20% it currently talks about — some polls put the party at around 17% — whether party leader John Steenhuisen will also fall on his sword. Or perhaps even Helen Zille, who has chosen her moments to dip in and out of electioneering. These moments include television and radio ads invoking the EFF as a threat and as a party that is radicalising the ANC.

But how fear-mongering about the EFF in particular and the ANC in general plays out, alongside an admonition that a vote for “smaller parties” would weaken the DA, remains to be seen.

The EFF has pretty much promised everything to everyone in a campaign strictly focused on its leader, Julius Malema. But its manifesto, fine-tuned to provinces, shows grassroots work, identifying how this ward in that town needs a hall, library or decent housing.

And the red beret campaign trail has been energetic, brisk and, yes, fun. Whether that translates into more votes also remains to be seen.

The profiles of independents and community organisations, seen from a national perspective, have been very subdued — unlike other parties such as the IFP, which for the first time fields a candidate in every ward in eThekwini.

With 257 councils — eight metros, 205 local municipalities and 44 district councils (the third ballot everywhere except metros) — the possible permutations of political control at local government are plentiful.

Hard and fast predictions are out of reach in the absence of consistent reliable polling data over time. But according to surveys by Afrobarometer, Ipsos and others, the one stable indicator is South Africans’ declining trust in public institutions and politicians.

Aside from delivering the shape of local government for the next five years, the 1 November municipal poll will send a signal on public trust of politicians, their promises — and electoral democracy. DM