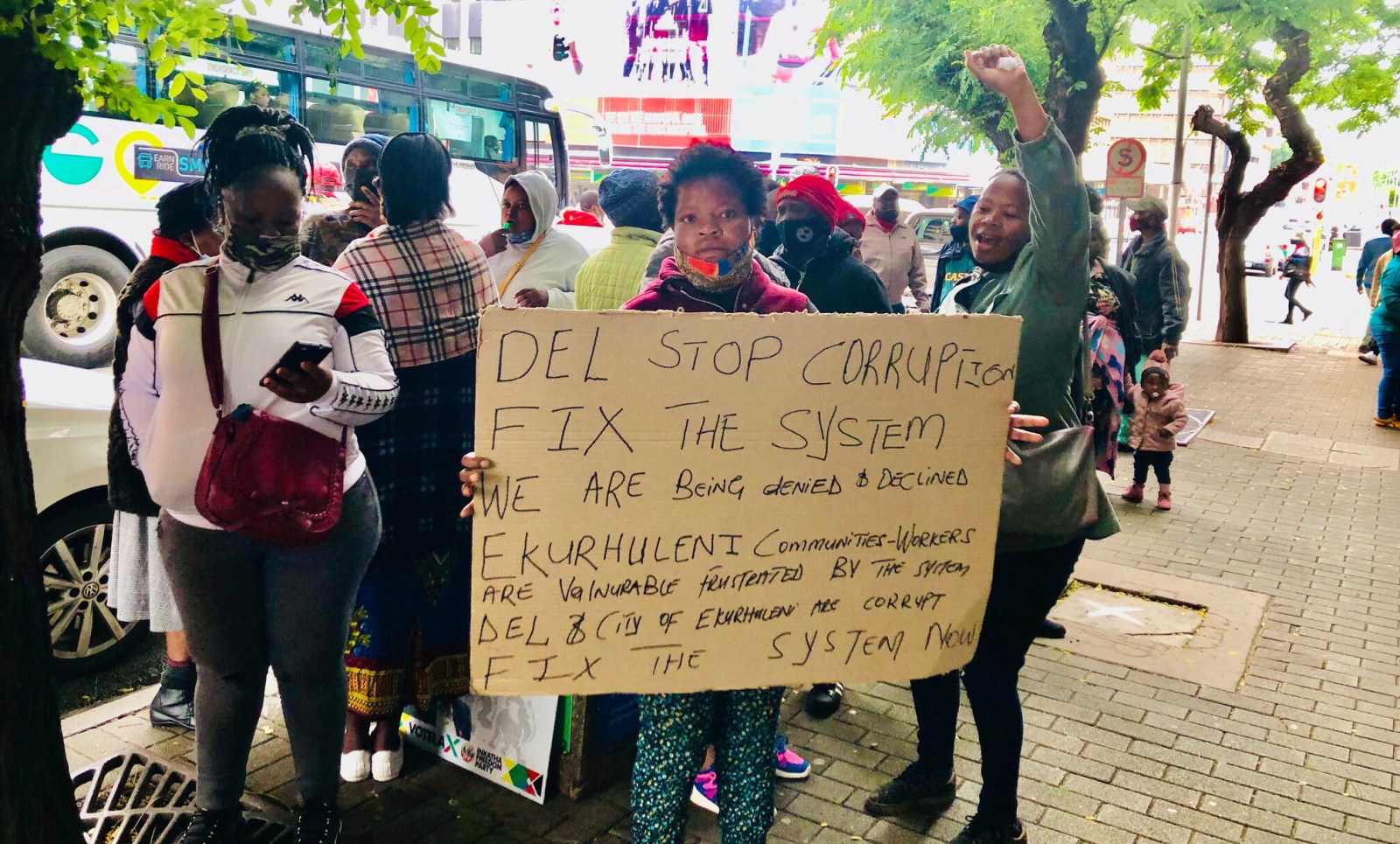 Former employees of the City of Ekhurhuleni protest on Wednesday. (Photo: Kimberly Mutandiro)

The former employees of Ekhurhuleni have threatened not to vote at Monday’s polls.

Former employees of the City of Ekhurhuleni who marched to the Department of Employment and Labour in Braamfontein on Wednesday say they have been failed by the authorities and will not vote on Monday.

The group claim they have no work or UIF money but can’t access social grants because they are still on the department’s database.

“How can we vote in the upcoming elections when we are hungry? We cannot access social grants because Sassa says we have income,” said 60-year-old Sizakhele Nkonyani, a former cleaner for the City of Ekurhuleni.

She was one of about 50 other former employees of the City of Ekurhuleni and other people who took part in the march organised by Simunye Workers Forum. Protesters demanded that the labour department clear their names from the employees’ database so they could access social grants.

Nkonyani says she was unfairly dismissed in 2016 but received no settlement from the employer or UIF money. However, her application to earn a pension was declined by Sassa which said she had UIF income.

“If the department does not want to pay me, let them clear my name from the database of employees earning income so that l can get a pension like other people my age,” said Nkonyani.

The marchers handed over a memorandum to Sipho Mthethwa from the Department of Labour.

“We will deliver the memorandum to our leaders. However the issue of grants is beyond us and should be taken up with Sassa,” Mthethwa said.

The memorandum read: “We represent communities across Ekurhuleni, where many of our unemployed residents are unable to access the measly R350 grant because of the Department of Employment and Labour. Many of us are also former workers employed under Expanded Public Works Programme (EPWP) schemes, like the Lungile Mtshali Community Development Project. Thousands of Lungile Mtshali workers were dismissed in 2015 but we are still on the [labour department’s] system for UIF which prevents us from accessing the grants.

Another former employee, Meti Mashinini from Daveyton, says she has no pension and is struggling to look after her family and grandchildren. “What worries me is that we continue voting when our government is turning its backs on us. We have gone from pillar to post with this case. I want my UIF money to be paid because my family is struggling. I would rather not vote. What’s the use?” Mashinini said.

“What will I vote for because my municipality failed me?,” said Thandiwe Dyantyi from Daggafontein informal settlement in Springs, who used to work as a cleaner at the Springs Customer Care Centre. “When l apply for food parcels or the R350 grant the system shows that I’m employed by the municipality. My son who was a medical student at University of Fort Hare dropped out when l lost my job. I could not pay for his fourth year and his NSFAS application was rejected because they said I’m employed.”

Mzwandile Xulu from Boksburg said, “What’s the use of voting for the people l usually vote for? I do not get any grants. l have no job or income. We have travelled a long road and we are not getting anywhere.”

Nandi Mosia, Sassa spokesperson said: “If your R350 grant was rejected because of UIF and you don’t agree with that please log on to www.srd.sassa.gov.za and click on the Appeals tab to lodge your appeal.” DM