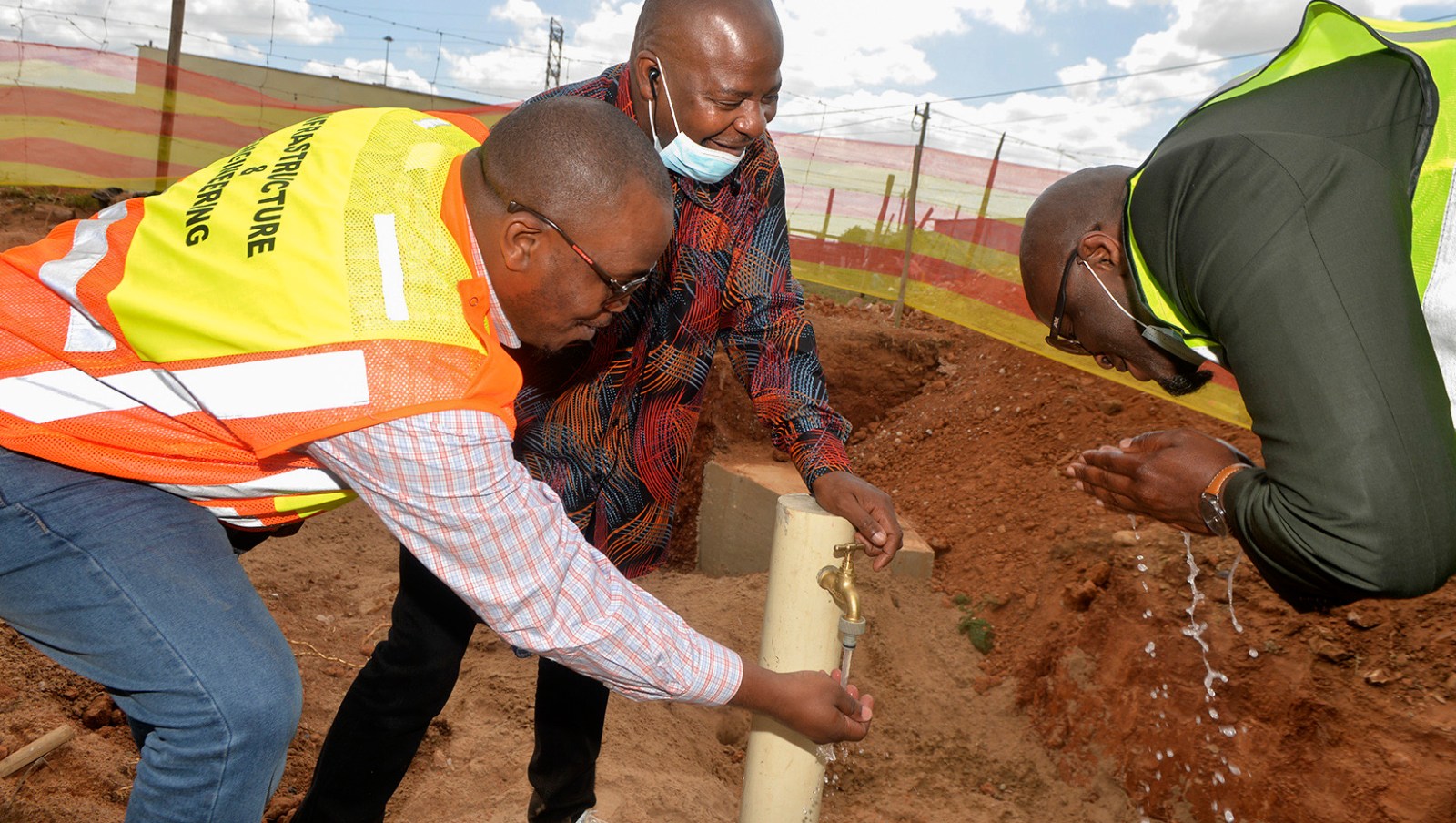 Nelson Mandela Bay Mayor Nqaba Bhanga has declared a dispute over a string of failures of the Amatola Water Board that has seen a potentially disastrous delay in the Nooitgedacht Water Scheme, a project that needs to be completed for the metro to avoid Day Zero.

Nelson Mandela Bay Mayor Nqaba Bhanga has asked President Cyril Ramaphosa to intervene as delays with the completion of the Nooitgedacht Water Scheme, which will bring water from the Orange River to the metro, could have disastrous consequences for the city, which is projected to run out of water by December.

Bhanga has vowed that the city will ignore water restrictions from the national department if it does not act expeditiously to complete the emergency water supply scheme.

The western part of the Eastern Cape is currently in the grip of an unprecedented drought.

Bhanga said the metro had declared a dispute with the Department of Water and Sanitation and had requested a response within seven days. He said the city would not hesitate to take legal action if it became impossible to resolve the impasse.

Although it is 96% completed, there is bound to be another delay in the completion of the Nooitgedacht Water Scheme. The metro is relying on the scheme’s extra water to preserve the levels of its dams, currently at 12%, and provide water to several districts once the dams run dry.

Bhanga, who was in full election mode, accused the ANC government of “breaking everything down” instead of fixing it.

“They break all the systems,” he said, emphasising that the metro was fast running out of water.

“We have a critical lifeline, however — the Nooitgedacht Water Scheme — but due to an administrative blunder of gross negligence the construction of the third phase of this project has come to a grinding halt.”

Bhanga said the metro was now taking steps to have control of the project returned to the municipality. The metro successfully completed the first two phases of the project and a pipeline to connect the scheme to KwaNobuhle and parts of Kariega (formerly known as Uitenhage) — the areas that are projected to run out of water first.

Bhanga said the third and final phase of the Nooitgedacht project was managed by the National Department of Water and Sanitation, which had appointed the Amatola Water Board as its implementation agent.

“The Amatola Water Board does not have the ability to finish anything. They have destroyed water schemes in the Eastern Cape. We will finish it in time,” he said.

While initial projections were that the “first water” would be let into the scheme on 31 October, Bhanga said they had been informed that the project would be delayed even further because the contractor had cancelled the contract after not being paid on time.

“Although the contractor has since been paid there is now nobody to complete the project,” he added.

Bhanga said that as a result, the metro was exposed to adverse risks.

“The combined dam levels are at 12%. We desperately need this project to be finalised,” he said. “Nelson Mandela Bay will run out of water if we cannot get this project back on track as soon as possible.”

The scheme will provide the metro, which is also a major centre for the car industry in South Africa, with an additional 40 megalitres of water.

Bhanga said without this extra water the residents of the metro will be “brought to their knees”.

He said given the extent of the crisis facing Nelson Mandela Bay Metro (NMBM) he had asked President Cyril Ramaphosa for his personal intervention and had also declared a dispute in terms of the Intergovernmental Relations Framework Act.

“We need to resolve this impasse immediately. I have no choice but to invoke this in defence of the people. One of my proposals would be for NMBM to take direct control of this project. The Amatola Water Board has been proven to be incapable of managing this.

“We are not going to fold our arms as a city. We will fight tooth and nail to keep water in our taps. We will refuse to comply with restrictions imposed on us. We won’t comply because of [the government’s] failures with the Nooitgedacht scheme,” Bhanga added.

“Give us Nooitgedacht. We will implement it with speed.”

He said that the last the municipality had heard from the Amatola Water Board was that it wanted an extension beyond December to finish the project.

He said while there was no time frame stipulated for the dispute resolution mechanism, the metro “cannot afford to sit around”.

Bhanga’s spokesperson, Leander Kruger, said the mayor would clear his schedule to deal with the issue.

Recounting some of the history of the ill-fated project, in 2018 former Minister of Water and Sanitation Nomvula Mokonyane said in a written answer to a question in Parliament that the project was scheduled for completion by the end of that year.

In 2016 she stated in a written reply to a question that Phase 3 of the project would be finalised by December 2018.

“This phase is fully funded by my department… All the work has gone out on tender which closes on Friday, 2 September 2016. All the evaluation and adjudication processes will then follow and it is expected to appoint a contractor by the end of October 2016, after which site establishment and construction should start. It will be a 24-month construction period and the anticipated completion date is December 2018,” she said.

“One of the challenges experienced was the signing of a tripartite agreement between the Implementing Agent, Amatola Water (appointed by the Department of Water and Sanitation (DWS), the DWS and the metro. This should, however, be solved in due course.

“Another challenge which caused a delay was the decision of the tender processes on whether to put the work out on different tenders, since the work requires different disciplines and skills, and/or whether all the work should go out as one tender. The decision was to put it out on one tender which, as mentioned above, is closing on Friday 2 September 2016,” she said at the time.

Kruger said the metro was completely sidelined in Phase 3 of the project.

Nosisa Sogayise from the Amatola Water Board said Amatola Water was unable to finalise the project due to the issues with variation orders.

She added that the third phase of the project was originally scheduled to be finished by June 2021, but they would now need another four months to finish the project.

“All these three stakeholders play a pivotal role in the project and they need to be recognised as they have the capability to stall the project should there be an element that does not function appropriately,” said Sogayise. DM/MC