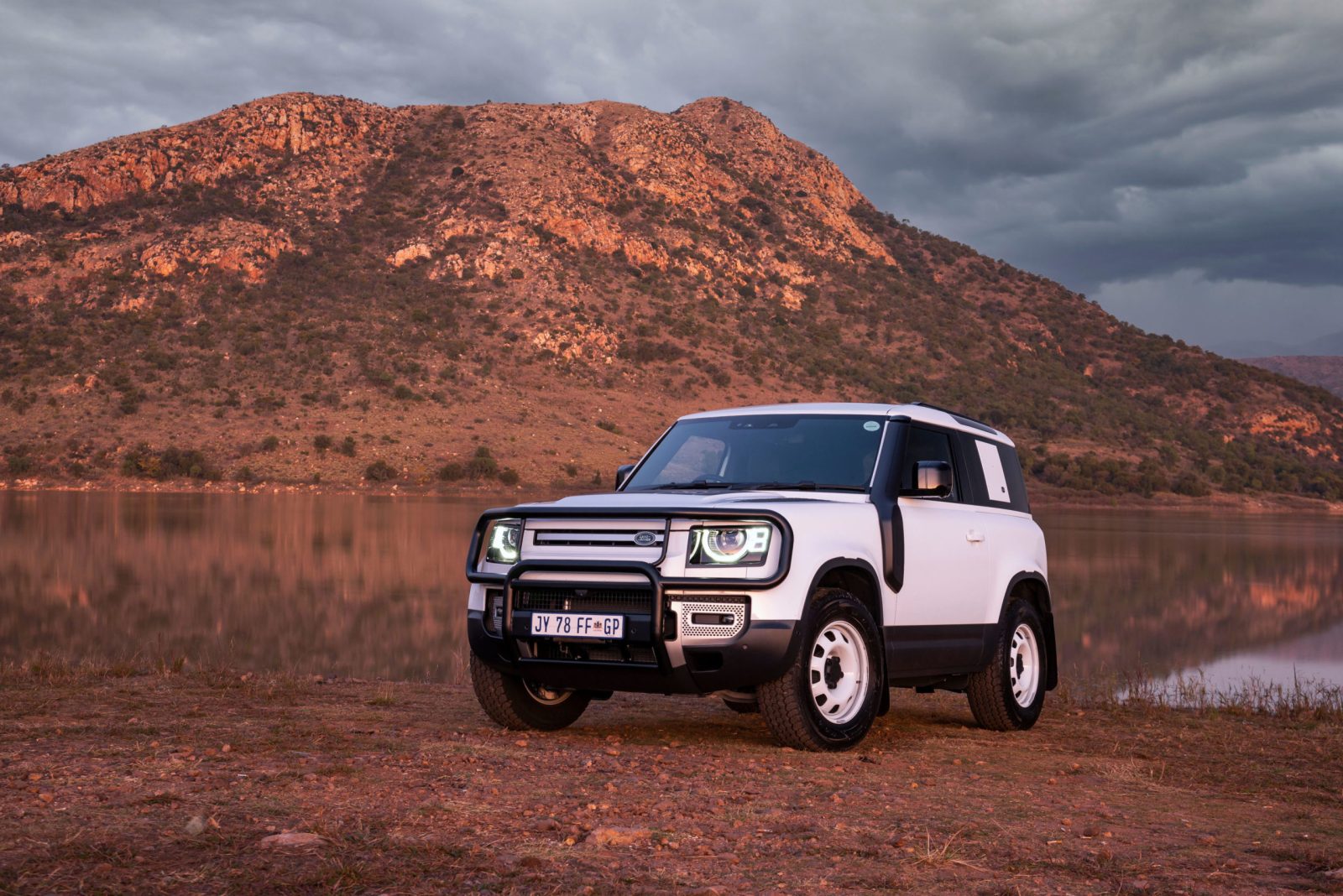 The new Defender 90 has joined its long-wheelbase sibling, the 110, as a compelling choice for those drawn to off-road 4x4 adventures and slick city driving.

There’s probably never been a vehicle that’s been dissed as much as the new “too posh for bush” Land Rover Defender… and that’s before anyone even drove it.

When the old Defender was sent to the car cemetery in early 2016, the disgruntled uproar was deafening. The image of hundreds of tearful Defender diehards congregating at the Land Rover production plant in Solihull, Birmingham, to bid farewell to the final Defender off the production line — a 90 kitted out in Heritage spec — is one that will go down in car history.

Granted there was much to weep about. The old tractor-like Landy with its enormous steering wheel and cumbersome gearbox had been around for 68 years. This was clearly a funeral for a legend.

I remember wondering if Jaguar Land Rover had lost its marbles. How could killing something like the iconic Defender possibly be a good idea? I was definitely in the camp of the grieving sceptics, ready to throw some cynical spanners when the upstart arrived.

Almost four years after the funeral, the new Defender was unveiled in Frankfurt in 2019 to a mixed reception. The cult-like Landy diehards continued to screech, but converts were also plentiful. I was one who seamlessly switched sides when I got my hands on the new 110 in September 2020. After a few seconds of feeling like a fickle woman cheating on a lover, I was enraptured. JLR had managed to perform a miracle by masterfully blending the old with the new, retaining the previous box-like shape, but giving the new one all the right curves in all the right places. The superior tech, the astute engineering, the luxurious interior, along with all the bells and whistles and an off-road Terrain Response 2 system, had me panting and praising.

Last Monday was D-day for the road trip. Just me and my rescue pup, Joe, ready to rock and hopefully not roll. Opening the rather heavy rear door (remember the spare wheel sits at the back), I was somewhat shocked to see the ungenerous boot space of just under 300 litres. I was planning a six-day getaway and was not travelling light. Where was I supposed to stash the two suitcases, Joe’s dog bed, dog food, cooler bags of supplies and all the rest?

Ahhh. Retractable rear seats. I pushed down the lever, shifted the electronically adjustable front seat forward and voilà, my mountain of supplies fitted in with room to spare. Joe, in his travelling bed in the back, was comfy as a king. I even managed to place his water bowl on the lid of the central cooler box which conveniently opens backwards.

Another thing I quickly noticed was the ample storage bins and cup holders in the 90. They’re everywhere — in the side doors and plenty in the centre and the rear. The next thing I spotted was no “openable” windows at the back.

Joe looked highly disappointed — no head-hanging and tongue-lolling out of a rear window. He may have been found in a dustbin in Elsies River, but this rescue has adapted quite magnificently to the life of Riley. He clearly approved when I located the electronically retractable fabric roof, which I managed to open with a flick of a switch above the rear-view mirror and now the blue sky appeared with fresh air blasting in. (That’s an extra, by the way, and will add R30,000 to the final bill.)

Options are where you’re going to see a significant ballooning in price. You can pick your own “pack” which differs by way of visual and functional elements. For example, there’s the Explorer which offers a roof rack, a side-mounted carrier and extra body protection. The Classic pack gets retro-style rear mudflaps and rear load area partitions, while the Urban one adds a spare wheel cover and rear scuff plates.

And then there are “packs” within the “packs” which culminate in a mind-boggling 37 model derivative choices for the 90. My D300 was souped up with the Off-Road Pack comprising an Electronic Active Differential, black roof rails and a domestic plug socket (R18,500), an Air Suspension Pack (R48,600), an Advanced Off-Road Capability Pack which included All Terrain Progress Control, Terrain Response 2 and Configurable Terrain Response (R11,300), along with the Comfort and Convenience Pack, made up of premium cabin lighting, a front centre console refrigerator compartment and wireless device charging (R5,400).

Does one need all this stuff? Of course you probably don’t, but if you’re going to be paying close to one and half bar for your vehicle, and experiencing your Defender at its best, you may as well have the full Landy Monty.

Over the next six days I savoured the hi-tech cabin, although I can just imagine the old diehards wringing their oil-stained hands and being totally overwhelmed by the cockpit of screens, menus and choices compared with the previous tech-less Landy.

There’s a 10-inch infotainment display as well as a high-definition instrument cluster that provides all sorts of info relating to trip information and driver assistance settings. It’s all pretty simple and intuitive to configure. I particularly enjoyed the banging Meridian sound system as well as the multiple cameras that show a 360-degree view from the 90, which really helps when parking and, of course, they’re even more helpful when one finds oneself in tricky off-road situations.

With the overall interior evoking rugged luxury and high-end durable premier, I was however a bit disappointed by the feel of the plasticky control buttons on the steering wheel, which just didn’t have the same solid feel as the rest of the vehicle and sometimes needed a second press to work.

Where the 90 really ticks the boxes is the way she drives. While I highly rated the 110, I found the short-wheelbase 90 to be much more up my alley. For a substantial part of my trip on tar it felt like I was in a luxurious crossover, with not a hint of road noise, nor a shudder, it was all just solid, stately sailing, supported by a smooth eight-speed auto gearbox. Despite her sizeable 2.2-ton weight, she is no slacker when it comes to speed, reaching 0-100km/h in just 6.7 seconds.

On Du Toitskloof Pass, the 90’s sharp handling came to the fore. I surfed the hairpin bends with heady control and adrenalised swoops, taking corners with assured abandon, supported by a fantastic chassis.

It must be noted that rear visibility from the cabin is less than ideal, mainly due to the placement of the spare tyre and white designer panels fitted in the rear windows. But clearly the engineers and designers took care of that by including a blind-spot monitor, lane-keep assist, and the very nifty ClearView rear-view mirror which has a high-definition camera giving the driver complete, clear sight of everything behind the vehicle.

When I approached heavily corrugated gravel, I didn’t have to adjust to a different terrain mode or slow this demon down. It seamlessly absorbed hard shocks without a hint of a shudder. And while I didn’t do any intense off-road tracks, this is where the 90 has received its highest praise from often cynical international motoring publications like Top Gear: “Traction is awesome. Clearance and articulation pretty colossal. Wading depth almost scary. Downhill control near-supernatural… ascents, descents, side-slopes, mud, sand. It’s not just that it surmounts and traverses and dismisses all these obstacles, it’s the effortlessness that amazes you.”

While the biggest barrier to ownership will probably be the price tag, I am certain there will be many who will traverse all sorts of financial obstacles to “Defender” the dream.

At the end of the road trip, with Joe brandishing muddy paws, having done some serious bone burials, it was a relief that I had removed the retractable rear carpets and could instead just wipe down the 90’s hard, plastic, washable floors.