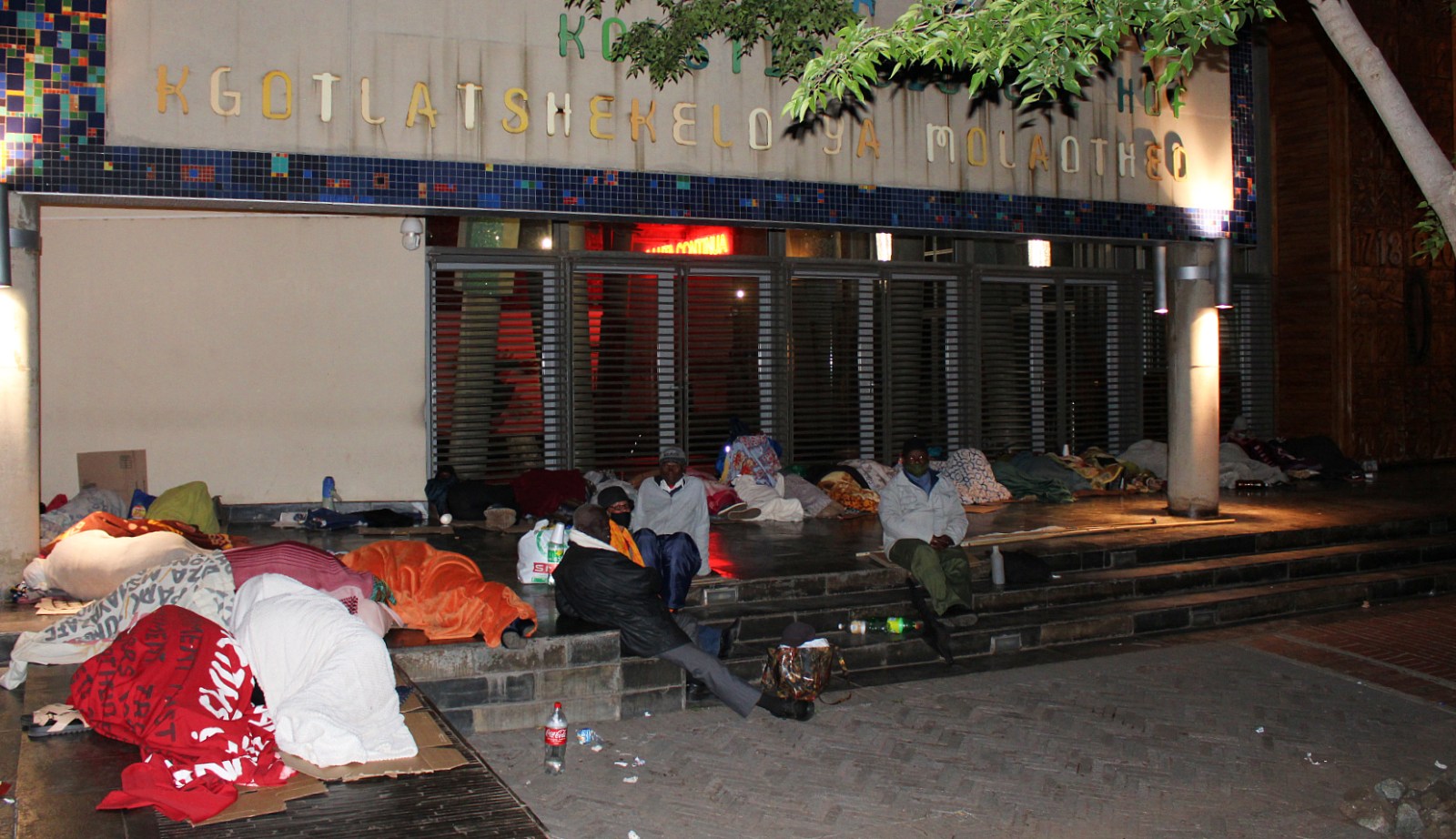 Members of the Khulumani Support Group slept outside the Constitutional Court last week, waiting to be addressed by the President and the Minister of Justice. (Photo: Masego Mafata)

Khulumani Support Group members insist government should pay up for what they believe they are owed, while pointing to R1.68-billion invested with the Public Investment Corporation through the President’s Fund.

“We were promised medical benefits but those promises have not been fulfilled,” says 67-year-old Edward Nqumse, who was assaulted and shot in the leg and chest by police in Phola Park, Thokoza, in 1993.

Nqumse received R30,000 as compensation at the time, but says the money has since run out and he can no longer afford to pay for ongoing expenses like pain medication.

Nqumse joined 90 Khulumani Support Group members who spent two nights outside the doors of the Constitutional Court in Johannesburg last week, demanding reparations for human rights violations under apartheid. Khulumani was set up to represent and support about 104,000 victims of apartheid and their families.

Most of those who slept outside the court come from areas in the East Rand including Katlehong and Phola Park, where there was intense violence between 1990 and 1994.

According to the Truth and Reconciliation Commission’s (TRC) report, incidents in those volatile areas included “train violence, taxi violence, conflict between township residents and hostels, and between ANC self-defence units (SDUs) and IFP self-protection units (SPUs)” which resulted in many deaths and injuries.

Angeline Sithole, a Khulumani member, said there was also violence between different ethnic groups at the time. “There were constantly guns going off. The area where I lived in Katlehong was so violent, it was referred to as a no-go area,” she said.

Last week, the group of mostly elderly Khulumani members sent a memorandum of their grievances to the office of the President and Minister of Justice. Included in the memo was a demand for the government to address the “unfinished business of the TRC” by paying reparations to everyone who suffered human rights violations under apartheid.

Nomarussia Bonase, Khulumani’s Gauteng chairperson, said no government officials or representatives met them when they arrived at Constitution Hill. “We decided to leave because many of us were rained on the night before, our belongings were wet, our food was running out and officials at Constitution Hill were not letting us use their toilets,” she said.

Bonase said they are yet to receive a response from the Presidency and the Ministry of Justice.

An elderly woman, who asked to not be named, told GroundUp, “Many of us are sickly, yet they leave us with no choice but to sleep outside in the cold.

“Last year, we picketed and slept outside the Union Buildings in Pretoria. Officials in the Presidency and the Ministry of Justice said they would arrange a meeting and follow up urgently on our demands. It’s a year later and we are still waiting,” she said.

According to Bonase, many records of incidents during apartheid have since been lost and the cases of many women who were raped by apartheid police were never dealt with because the TRC did not include rape as a political crime that qualified for amnesty and reparations.

Khulumani members also said they are frustrated that the President’s Fund — money which was supposed to be used for reparations — is “sitting and accumulating interest” rather than being paid out to people who suffered human rights abuses during apartheid.

Questions sent by GroundUp to the Presidency and Department of Justice were unanswered by the time of publication. DM