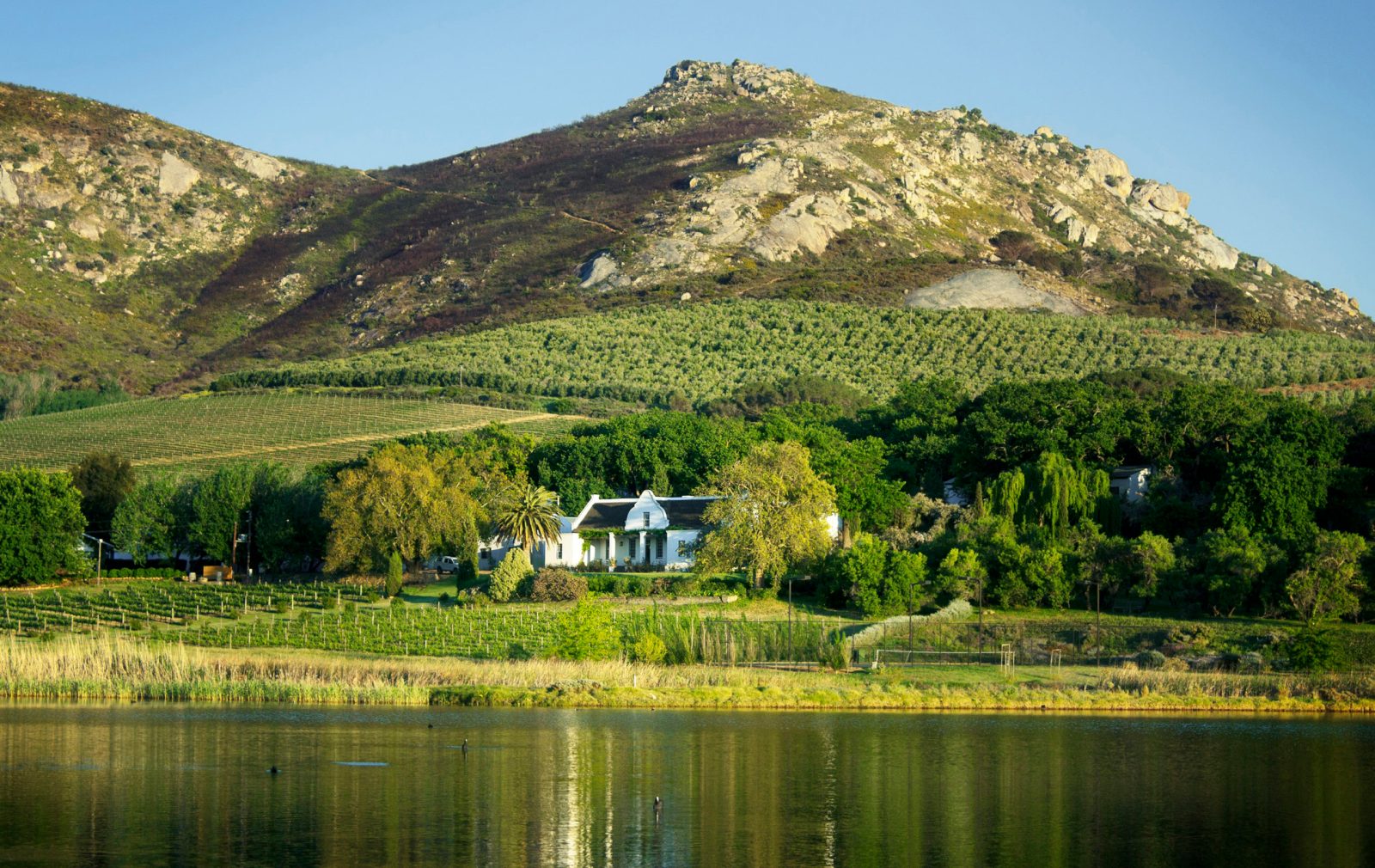 A lake view of Vondeling Farm. Vondeling has taken up conservation efforts that have seen the protection of endangered and critically endangered plants on the farm. (Photo: Vondeling Wines)

As a result of increased agricultural activity brought about by the expansion of the wine industry, the biodiversity of the floral kingdom is under threat in the Cape Winelands. A conservation programme by the WWF is now helping to ensure that wine farms decrease their impact on the environment.

Wine farmers in the Cape Winelands are increasingly turning to alternative farming methods, which are helping to preserve the two global biodiversity hotspots in the region.

About 95% of South Africa’s wines are produced in the Cape Winelands, which is in the Cape Floral Kingdom and includes the Succulent Karoo biome. Unesco has recognised it as one of the world’s six floral kingdoms and it is the smallest and most diverse plant kingdom.

But as the wine industry expands, currently contributing R55-billion to the GDP, increased agricultural productivity has brought about a disturbance to the region, threatening its biodiversity.

The agricultural sector, through increased production, is also notorious for its contribution to the climate crisis, contributing about 17% of global emissions.

Now a conservation programme by the WWF seeks to ensure that wine farms decrease their strain on the environment and produce wine in harmony with nature and its needs.

Bridget Johnsen, conservationist for Vondeling Wines, told DM168 that the climate crisis was increasing the threat to ecosystems that sustain humanity. She said the farm had 35 plants listed on the endangered list, eight of which are critically endangered.

“Increased frequency and intensity of fires makes it vital that the fuel and heat generated in fires involving alien vegetation is kept to a minimum, to minimise impacts of too-frequent or uncontrollable wildfires.

“The forecast of more droughts and increased daily temperatures will seriously impact the wildfire risk and water resources available for agriculture in this already water-constrained region,” Johnsen said.

The winery, which is on the slopes of Paardeberg mountain, says it mitigates and minimises threats by clearing alien plant species and through erosion management, fire prevention and control, water conservation and biodiversity preservation.

These efforts are also part of an agreement with Cape Nature to preserve more than 250ha of fully conserved land.

“On our 120ha of vineyards, we have converted all irrigation to drip management, now also informed by soil moisture-guided technology for water application. Using minimal till, we plant alternate row mixed cover crops each winter. All vine prunings are left on the land, to return as much carbon to the soils as possible,” Johnsen said.

Gidi Caetano, estate hospitality and public relations manager at Anthonij Rupert Wines, said conservation efforts had led to a reduction in the cost of resources used. The removal of alien vegetation, – a conservation effort on the farm since 2003 – has led to efficient water use, which benefits indigenous flora and plays a major role in fire prevention.

“The addition of a fynbos corridor allows for the movement of animals through more cultivated areas and has led to conservation areas thriving with natural fauna and flora, as is evident in our log of animal sightings on the estate, including insects like the Cape bluet [as well as] birds, leopard and the Cape fox,” she said.

Caetano told DM168 that the biggest conservation effort in the wine-making process was related to water consumption.

This has seen the farm convert its vineyards to a drip-irrigation system. Added mulch and cover crops to enrich plants and retain soil moisture have also been among efforts to ensure reduced water use, while cellar water points have been fitted with high-pressure valves.

“The second-biggest component is in the packaging we use, where we are constantly striving for more environmentally friendly materials and products, as is illustrated best by our Protea wine range, designed expressly with upcycling in mind,” she said.

Fuller said some of the farms diversify their wine offering through sustainable initiatives to include nature-based activities such as hiking, eco-lodging, nature drives and bird-watching.

She added that this kind of development brought nature closer to the wine-tasting experience, highlighting the relationship between the winelands and nature.

Some of the farms have taken it a step further and named their wines after endangered species indigenous to the Cape Floral Kingdom, such as the Merwida Papenkuils range and the Vondeling Babiana and Monsonia wines.

The winemaker added that the Papenkuils conservation area is one of the freshwater jewels of the Western Cape, as it is the largest and best-preserved wetland adjacent to the Breede River system – the wetlands of which are home to Merwida Wines.

The Papenkuils conservation area is recognised by Unesco and the WWF as an irreplaceable ecological cornerstone of Western Cape conservation efforts. Surrounded by agricultural land, housing developments and a dam, the area is also home to several indigenous and threatened plants, seven of which are on the red list.

“One is dependent on the other for survival – nature is the foundation of farming. And these Conservation Champions understand and honour that. Collectively, they own 43,000ha of land, of which 23,000ha are conserved as a pristine part of the Cape Floral Kingdom.

“We hope to achieve an even greater area of this unique natural heritage to be conserved, but also [hope] that consumers become more aware of the impact of their every purchase. We can all make a difference in how we restore the world around us,” the WWF programme manager said.

“Our regenerative agriculture approach and conservation of the incredible biodiversity of this tiny Cape Floral Kingdom (which represents one sixth of the world’s plant species) has provided a wonderful platform for our wines to tell their story,” Johnsen said.

“We only have one planet, and every action we can take to improve its health for future generations is vital,” Johnsen said.

“We believe that the landscape we inherited when we bought these farms is in a better space than it was when we arrived.” DM168