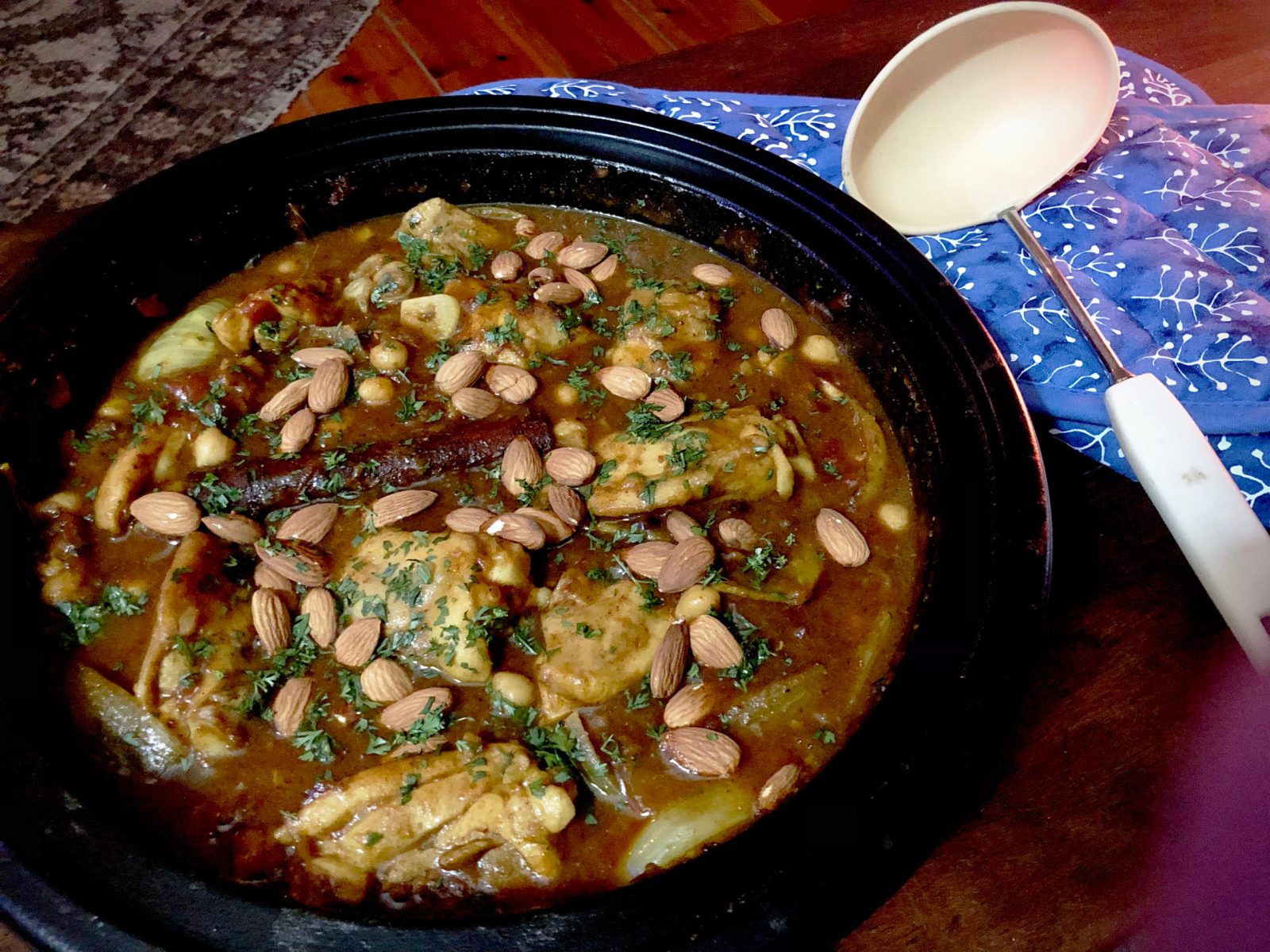 The marriage of the spices favoured in Moroccan cuisine with honey creates a bit of sorcery in a tagine. A chicken tagine recipe needs fruit, and dates are the perfect fruity ingredient for a spiced chicken dish.

This turned out exquisitely; easily the best chicken tagine dish I’ve made (he says with all due humility, promise). Just a few tricks to bear in mind: the skins of the chicken thighs must be removed as they’d become soggy and horrible while cooking; the sweetness and spiciness need to be balanced, and browning the flour-seasoned chicken pieces to begin with makes a massive difference to the quality of the outcome.

Though I did cook it in a tagine, it can just as well be made in a heavy casserole of some kind. I have one of those Le Creuset ones with a heavy cast-iron base and a conical stoneware lid, my blue ceramic tagine having broken years ago. I had bought it at the annual French market that comes to the south of England every December, a real beauty. We’d also buy tins of pâté de foie gras and other French delights as a Christmas time treat during our Chichester years.

Mix the six dry ground spices (cumin, ginger, coriander, cinnamon, chilli, turmeric) with the cornflour in a bowl and coat the chicken pieces all over in it. That blend of spices will give you the distinctive flavour of a Moroccan spice mix. Retain the leftover spice mix.

Heat olive oil in a tagine and fry the chicken pieces in batches until browned on all sides. Add more oil if needed.

Remove to a side dish and fry the onions for 4 to 5 minutes, then return the browned chicken pieces to the tagine and add any remaining spice-flour mixture, the garlic, ginger, cinnamon stick, can of chopped tomatoes, bay leaves, and the honey. Pour in the chicken stock and stir.

Season with salt and pepper, cover and cook for 30 minutes.

Remove the lid and add the dates and chickpeas. Cook for another 5 minutes.

Meanwhile, toast the almonds in a pan until they turn a slightly darker hue, just 2 or 3 minutes, and chop the coriander leaves. Serve with couscous prepared according to the packet instructions, scatter the toasted almonds on top and sprinkle with coriander. DM/TGIFood

Tony Jackman is the Galliova Food Champion of the Year, 2021, for his food writing. His book, foodSTUFF, is now available in the DM Shop. Buy it here.

SUBSCRIBE: There’s much more from Tony Jackman and his food writing colleagues in his weekly TGIFood newsletter, delivered to your inbox every Friday at 1pm. Subscribe here. Also visit the TGIFood platform, a repository of all of our food writing.