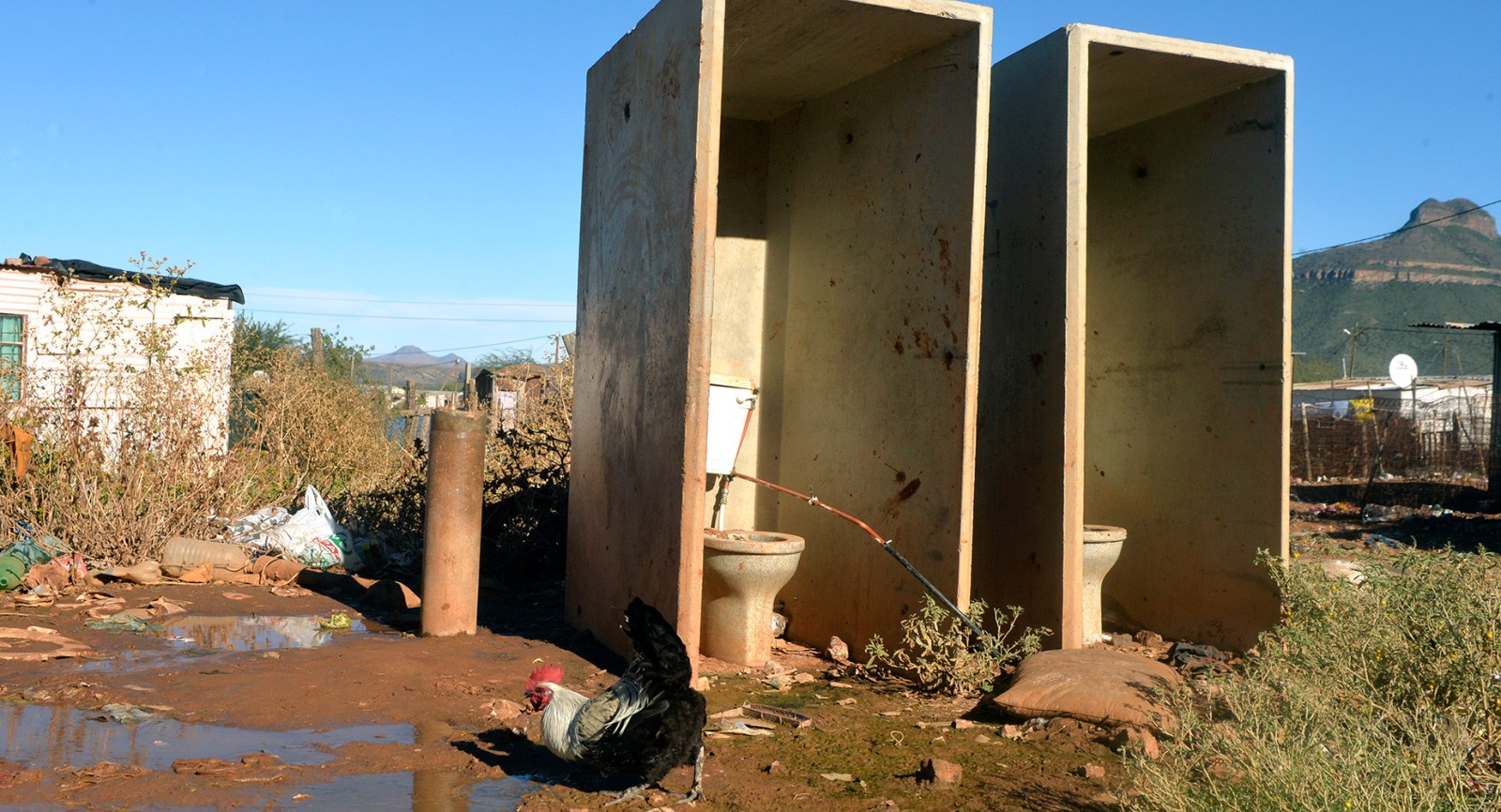 Communal toilets in Riemvasmaak, Graaff-Reinet have deteriorated to such an extent that it can longer be used by the community. (Photo: Deon Ferriera)

Many impoverished communities have been condemned to the political wasteland of service non-delivery, while deployment and tenders to politically connected companies remain the order of the day in many municipalities. Political parties’ graving for power has come at an impossibly high cost for the poorest South Africans.

Centring on power rather than health and dignity, the narratives of the upcoming local government election highlighted the deep chasm between politics and the needs of the community.

It was only really the independent parties or new service delivery movements that talked about the rubbish in the street, the potholes and not having water. In the bigger political parties, there appears to be very little understanding of what it means to have homes flooded by sewage, to have to live amidst rubbish, to be scared to drive at night because of potholes — even if some of them, and rightly so, claim to “get things done” this efficiency often is not extended to the poor and the vulnerable.

Where parties like the Dr Beyers Naudé Local Municipality’s Service Delivery Movement run on promises of a JoJo tank and a wheelie bin per house, there should have been a national conversation about the right to dignity.

Why are we not outraged when communities like those in Cradock must spend six days without water because of what is likely mere incompetence cloaked in a number of excuses?

It is not supposed to be the Constitutional Court’s job to do this, but often it becomes their job. Would it not be refreshing to have an election where the fight is not to get on the candidate list, to pursue political power and access to a slice of lucrative tenders but rather to pursue dignity for communities where little has changed in more than two decades.

We need a better quality ward councillor. As Nontando Ngamlana from NGO Afesis-Corplan explained, many councillors where they provided training could not even understand why one should not pass an unfunded budget.

For the people of Riemvasmaak in Graaff-Reinet, the hope is that the election will not give them a ward councillor. It is the hope that they will get working toilets and that someone will clean the three broken and blocked toilets that were provided for hundreds of people. For the people of Vrygrond, in the same municipality, the hope is that the election will provide them with adequate sanitation so they do not have to use the veld. For the people from Bonteheuwel in the Western Cape, as community leader Henrietta Abrahams put it, it is the hope that a caring local government will “see” the community and fix the roads.

For the people of Kentane in the Eastern Cape they need a municipality that is organised enough to fetch a few Jojo tanks from a warehouse, build some concrete stands and mount the tanks to provide water.

The question civil society organisations and communities asked repeatedly was what space the constitutional right to dignity had. The answer from political parties appears to be that they will talk about being in power first and then talk about dignity.

The undeniable truth is that the right to dignity is a low priority and is creating a simmering tension in communities.

It prompted people like veteran human rights campaigner Khusta Jack to join the political fray. It saw the Makana Citizen’s Front throw their hats into the ring and stand for political office.

People can just be ignored for so long.

Recently Ayanda Kota from the Makana Citizens Front raised his frustration about the attitude of the ruling party towards a court case where communities won a hard-fought order to have the Makana Local Municipality dissolved. The ANC government of Premier Oscar Mabuyane instead took the long road of fighting it in the Supreme Court of Appeal — effectively scuppering community efforts to establish a better local government and successfully managing to save the local municipality until the elections. This was in sharp contrast to their quick action to dissolve other municipalities where it seems politically expedient.

Kota rightly says that there is something so deeply undemocratic about this, that it left the community frustrated and angry.

The truth is that the incumbent parties, whether different or the same, will probably inherit a bankrupt municipality or one close to financial distress.  This will see programmes that will restore dignified living conditions delayed even further.

With rising unemployment, chaotic water supply and mostly unreliable and crumbling electricity infrastructure the right to have dignified living conditions will be put even further on the backburner.

But perhaps if those who are not prioritising cadre deployment and tenders to politically connected companies, perhaps those who act out of concern for community rather than self-enrichment will save the day.

Because if there is one certain thing in our communities this election, it is that many communities have reached the end of the road. DM/MC