No water, power, sanitation: Local councils in remote KZN areas might pay at the polls 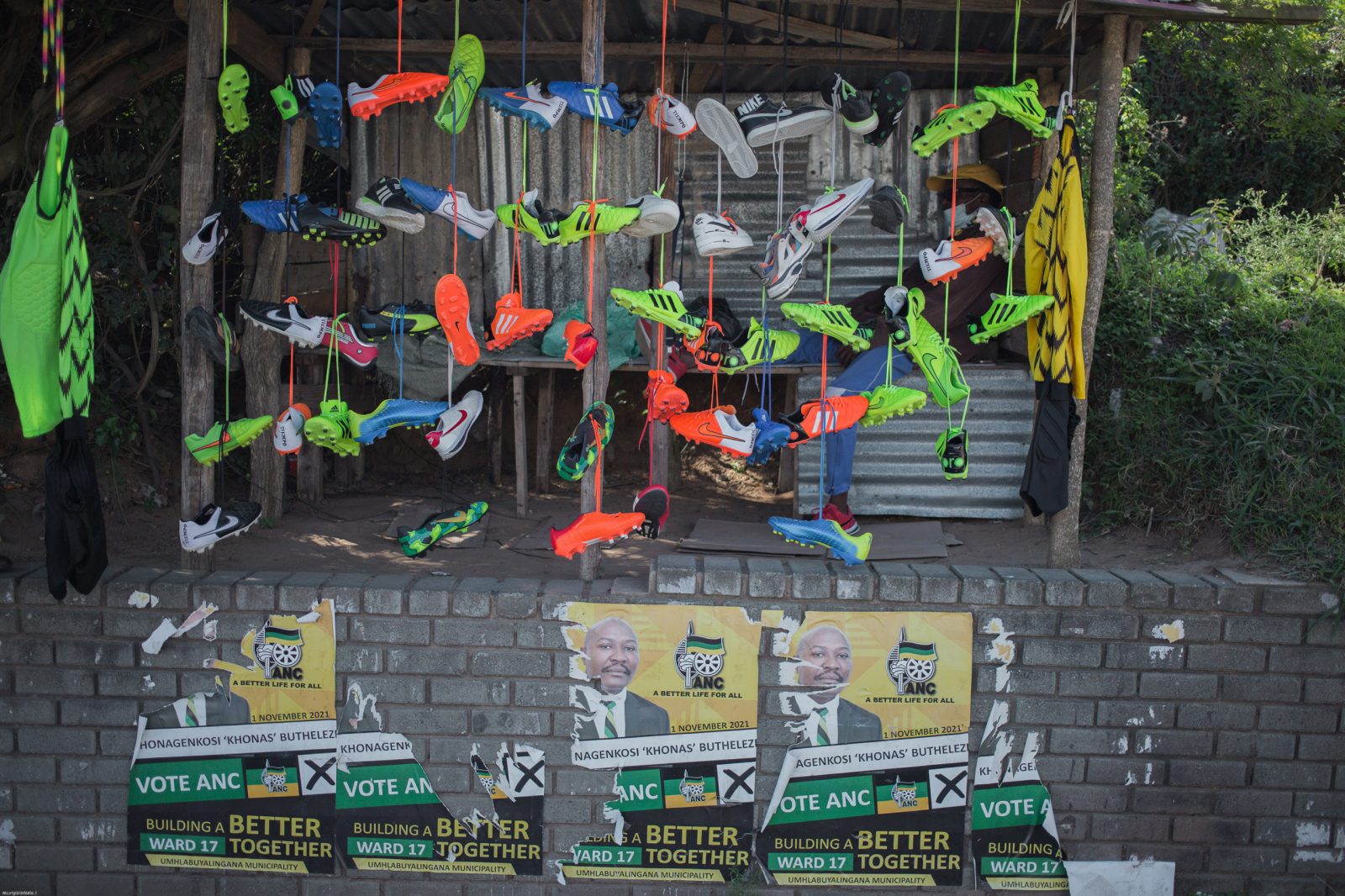 19 October 2021: A street hawker hanging soccer boots near the road with the torn ANC candidate posters in Manguzi town. Photography by Mlungisi Mbele

Communities across the uMhlabuyalingana municipality, a rural area in north-eastern KwaZulu-Natal bordering Mozambique, say that acute shortages of water, jobs and sanitation are their biggest burdens. After years of broken promises, will the next crop of councillors make a difference in their lives?

Voting is not high on the to-do list for the marooned community of Enkovukeni, located between the town of Manguzi and the Mozambican border area called Ponta do Ouro.

Locals who spoke to Daily Maverick during a visit to the area were adamant that they would not be voting in next week’s local government elections.

The area is mostly only accessible by boat — especially during the summer rains — and hundreds of schoolchildren have to strip off their uniforms when crossing the river to and from school.

As if that’s not enough, the community has no running water, electricity or other basic necessities.

“We don’t see the point of voting. We have been voting for years and politicians have been promising us bridges, water and other things… but once the elections are over, they disappear and forget about us,” said Ray Ngubane (43) who has lived in Enkovukeni all his life.

He said that the community of Enkovukeni — Umhlabuyalingana local municipality’s Ward 10 — had decided to boycott the elections as a way of showing its dissatisfaction.

Other residents of Ward 10 are just as angry about the corruption, lack of service delivery, high unemployment, lack of access roads and a host of other issues. However, unlike the community of Enkovukeni, they will use their vote in the hope of changing their lives.

Just over 172,000 people live in uMhlabuyalingana. The average annual income is R15,000 (about half of the average in KwaZulu-Natal). Only 14% of the population is employed, according to statistics from Wazimap (drawn from a 2016 survey). When it comes to service delivery, about 46% of households get water from a regional or local service provider, 76% have no access to electricity and 12% have no access to toilets. Only 15% of households have access to flush or chemical toilets.

Dumisani Mthembu, a 56-year-old resident of eMazambaneni (also in Ward 10) near the town of Manguzi said that in the previous elections he had voted for the ANC, but that this time around he and a number of other residents had decided to support a local woman for councillor, the IFP’s Sbahle Gumede.

Mthembu has a number of campsites he had hoped to develop to link up with nearby tourist lodges. At one point, he approached the local uMhlabuyalingana municipality with a business plan for help in developing the sites and ablution facilities.

“They took all our details and made so many promises, but we have never heard anything from them. I strongly believe that the money was sourced but was diverted to well-connected people. Corruption is rife here,” said Mthembu.

Gumede said she was confident of wresting the ward from the ANC. She said her campaign had been enthusiastically received by locals and that most were tired of the ANC’s “corrupt” administration in the municipality.

During Daily Maverick’s recent visit, Manguzi’s main road leading to the Mozambican border was under construction on either side of the town, with stop-and-go barriers hampering the free flow of traffic.

Water scarcity was a common problem among the communities across uMhlabuyalingana municipality. Those who can afford it have built boreholes — those who have no money are forced to rely on municipal water tankers. These arrive haphazardly, if at all.

Nkululeko Mthethwa, the mayor of uMhlabuyalingana municipality, is pleading with residents, including the Enkovukeni community, to exercise their right to vote. He says the municipality is doing its best to deal with their problems.

“In Enkovukeni, for example, when I took over as mayor in 2016, we linked the community with the South African Maritime Services Authority which provided five boats to transport community members and pupils across the river. Unfortunately, the parts of these boats were stolen. The government is trying other alternatives to help this community,” he said.

Mthethwa denied that his municipality was beset by corruption.

“It is the first time that, for a record of five years, we have had a clean audit and an unqualified opinion. The public purse has been very safe with us as we have been able to account for expenditure during these years. Secondly, in uMhlabuyalingana there was an electricity backlog of 81% when we took over. We have narrowed this to 48%.”

Despite this, he acknowledged that uMhlabuyalingana municipality still faced a number of challenges, including the implementation of the retention strategy and Organisational Performance Management System framework, the Performance Management System policy, poor ICT network infrastructure, limited funding for training of municipal employees, electricity capacity constraint, water shortages, poor planning at the district level, sanitation backlogs, poor maintenance of public facilities and other issues.

Communities across uMhlabuyalingana said the acute shortage of water and sanitation was their biggest problem. Many young people decry the lack of job opportunities in the area. Some said jobs were being given to newly arrived undocumented Mozambican nationals.

Sfiso Ntuli (35) sells roast chicken, pap and cold drinks on the main road leading to Manguzi. He supports his two children and six other family members with the money he makes. He said has never done formal work since finishing school almost 20 years ago.

“There are no job opportunities here. I was doing piece jobs here and there and those have since dried up. Two years ago I asked my family for support to start this business.

“I don’t have much hope with this upcoming election. But as a hustling small businessman, I would like whoever comes into power to think about us as the youth. Personally, I would like to get support to improve this place, to make it a formal structure so that my customers can enjoy their meal in a respectable place.

“We need government support because we are trying to make a living without stealing or begging,” he said.

His sentiments were echoed by Goodness Mpanza (49) who has been a hawker near the Manguzi taxi rank since 1994, selling fruit and vegetables, sweets, cosmetics, water containers and other items.

She said she would like to have a shelter so that she can keep on selling “even if it is raining”.

Mpanza said the ANC councillor of her ward, Lucky Tenbe, had installed a borehole for communities in his ward and was now helping to provide RDP homes. “He must continue to do the good work. We now want him to build access roads and to speed up the provision of RDP homes. That’s why we will choose him again,” she said.

The uMhlabuyalingana municipality has 35 seats. In the 2016 local government poll, the ANC won 23 seats, the IFP took nine and the Democratic Alliance (DA), African Independent Congress (AIC) and the Economic Freedom Fighters (EFF) won a single seat each.

Nkululeko Mthethwa (the present mayor and an ANC election coordinator) said they were confident that the people of uMhlabuyalingana would retain the ANC because “our record speaks for itself. We are going to do even more after we have been given a fresh mandate by our people. We will speed up things and bring more services and development to our people.”

Naye Mathe, IFP regional chairperson and the party’s head of elections in the region, said his party had been well received.

“We are running a very successful campaign and I am certain we will win many wards from the ANC. Many people say they want to return this municipality to the IFP because they trust our party to run a clean, corruption-free administration.”

Daily Maverick elections analyst Wayne Sussman said the ANC and the IFP had signed a deal allowing the ANC to take over in the Johannesburg and Midvaal municipalities in the local elections in 2016. The power-sharing deal extended to KZN municipalities such as Jozini, Hlabisa and uMhlabuyalingana.