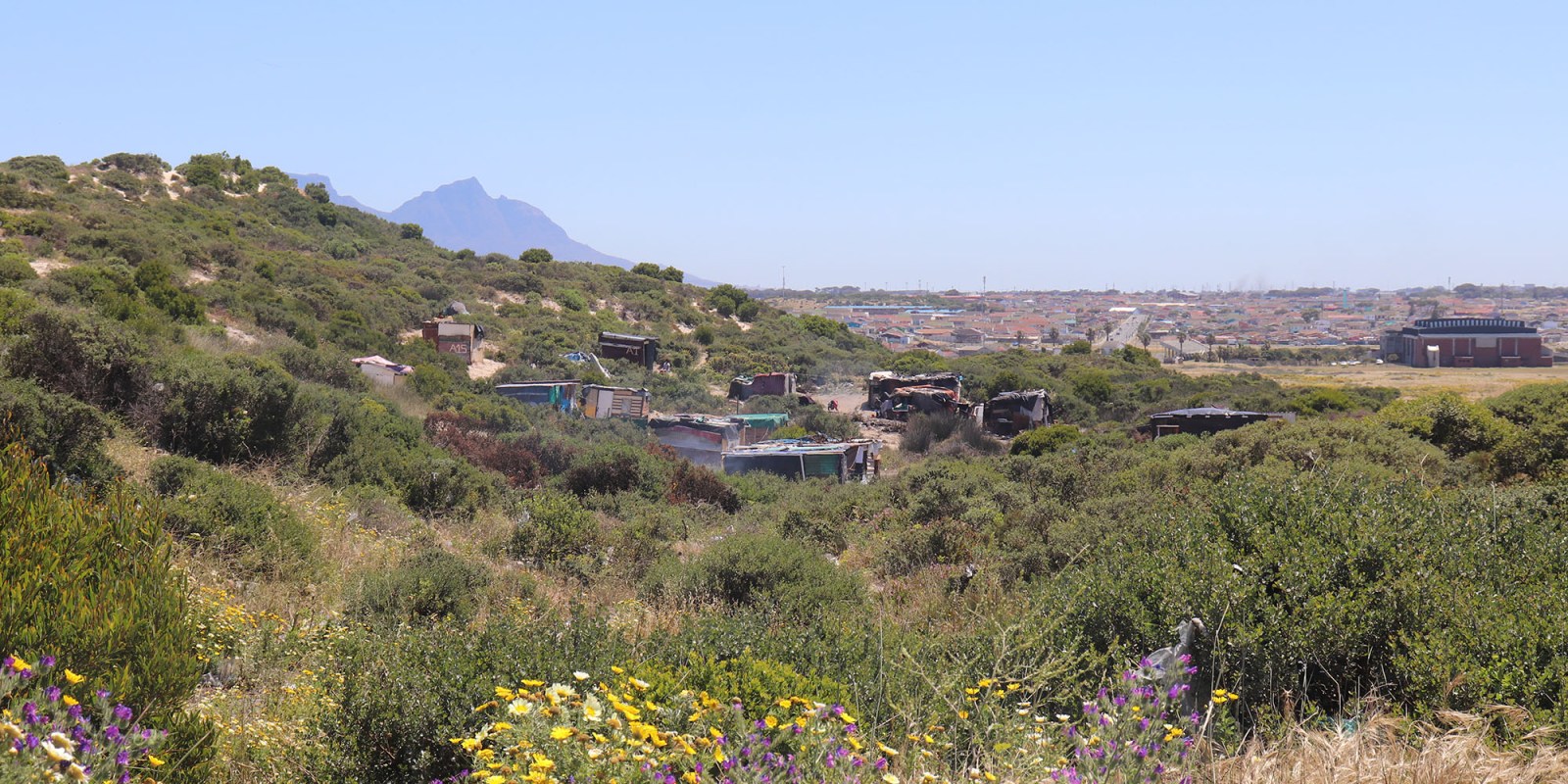 At least 20 people live in this informal settlement in Hyde Park, including a couple that lives under a tree. (Photo: Karabo Mafolo)

Ward 99 consists of Hyde Park in Mitchells Plain and parts of Khayelitsha. The neglected state of Hyde Park, in Tafelsig, validates its status as the Lost City.

Mitchells Plain is a sprawling Cape Town suburb whose inhabitants range from the middle class to the poorest of the poor. In the Hyde Park area of Mitchells Plain residents grapple with a lack of infrastructure, housing and rampant crime. Hyde Park, Freedom Park and parts of Tafelsig are referred to as Lost City.

Hyde Park presents a poverty pattern that has remained largely unchanged for years. The only significant improvement, voters said, is the Reconstruction and Development Programme (RDP) homes built between 2008 and 2010. 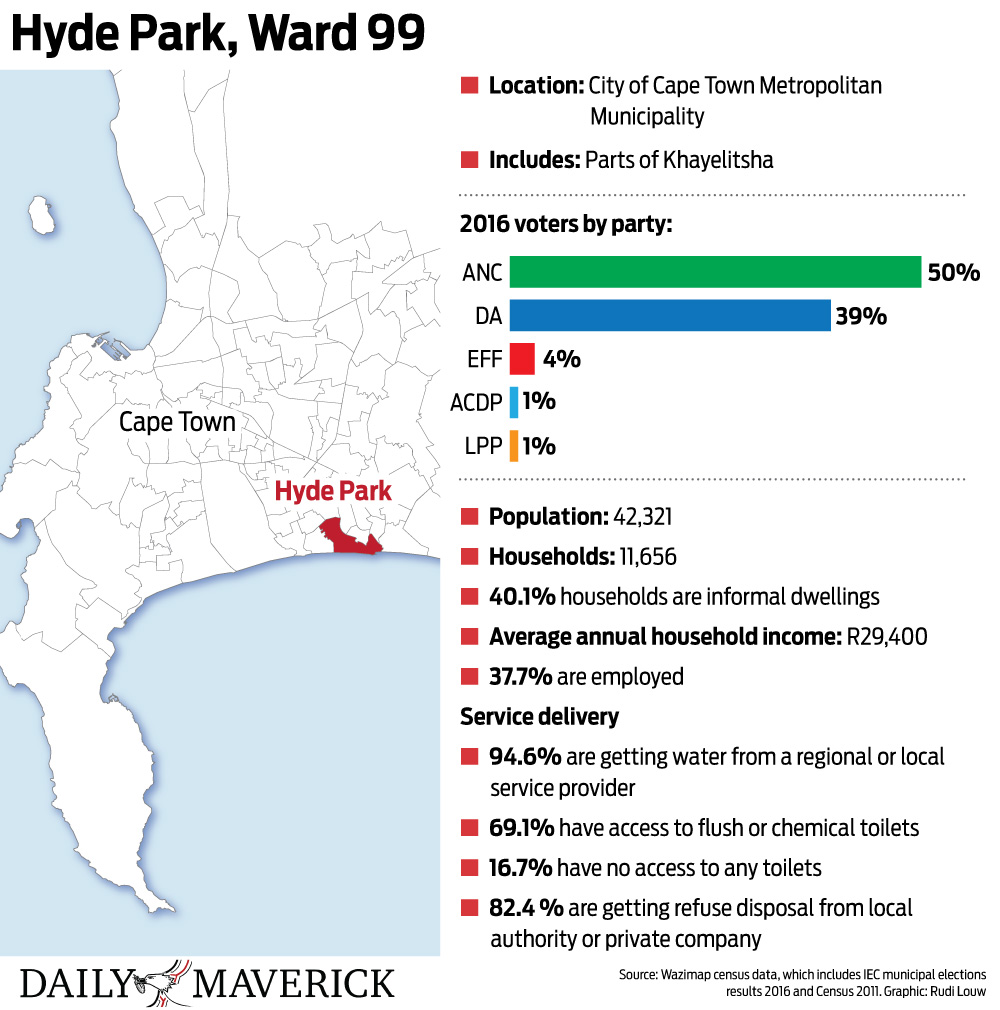 ANC councillor Bongile Ngcani said that poverty, crime and unemployment were the biggest problems in Ward 99.

After the local election on Monday, Hyde Park and Freedom Park will fall under Ward 92, he said.

Electoral Commission (IEC) provincial spokesperson Trevor Davids said the demarcation process was handled by the Municipal Demarcation Board. Every five years, before local government elections, there is an opportunity for new ward delimitations to be proposed and set.

“The IEC were informed and we distributed pamphlets and used loudhailers to inform residents of ward changes,” Davids said.

Skarreling to put food on the table

Skarrel or scrap collecting is one of the main sources in the ward of earning money and putting food on the table, and even young children in the area collect scrap.

Because of the high unemployment rate and backyard dwellers unable to pay rent, many people have resorted to squatting.

The first stop during a visit to Hyde Park was on Francis Street where we met 42-year-old Nicolette Davids, pushing a bath on a makeshift trolley. Inside the bath was the black plastic cover of a TV.

“I’m one of more than 50 people who skarrel in the area. Since the 2016 election, nothing has been done to improve conditions in the area. The only good thing that happened was that we were handed RDP houses.

“We are thankful, but how can I maintain a house if I’m unemployed? I voted in 2016 and what I got was a waentjie [trolley] to make ends meet. I’m tired of all the empty promises and I’m not interested in voting on 1 November.”

Community leader Reva Fortune is chairperson of the local sub-forum of the Community Policing Forum. She accompanied Maverick Citizen on its tour and noted that it was sad that many people had to skarrel to make money.

“Since Covid-19 more and more children drop out of school. Children are introduced to scrap collecting at a very young age. It is a quick and easy way to make money, so if you don’t go to school you work to collect scrap.”

At the back of a field that had turned black due to the burning of cables for copper is a squatter camp called Boston Town. About 30 families live on this field and the numbers are growing, Fortune told Maverick Citizen.

“They are all backyard dwellers who ended up in Boston Town. [They] cannot afford the high prices homeowners charge. That’s why we have so many people on the street and living in the bush.”

Hermon Bartie, one of those helping to alleviate conditions for Boston Park residents, said it is no use speaking to politicians because they don’t do anything.

“We are gatvol of politicians and ward councillors. How many promises politicians made in the past… Next time they come into Boston Town, our people must chase them away,” he said.

Boston Town resident Kashiefa Julisen (58) lives in an informal structure covered with blankets. She was forced to sell her house after people gambling in front of her home threatened her.

“My home was targeted by gangsters, there were shooting incidents and my home was broken into too many times. All I want from the government is to give me and the people in Boston Town decent homes.

“For the past seven years I’ve become used to living without water, electricity, sanitation and using the bush as my toilet,” she said.

Where home is a tree

Not far from her, Phumsile Seku lives under a tree. He is unemployed, has nowhere to go and is pinning his hopes on whichever party takes over to take him away from the tree and into a home.

On the escalating crime in the area, 46-year-old Aisha Adrian, a widow with five children, says her husband was a gangster. He was shot and killed four years ago.

“My two boys have mixed with the wrong friends. It is not safe for me as a single mother. Gangsters have run into my home while chasing my sons. I was also held at gunpoint in my own house.”

She wants more recreational facilities to be built to prevent young children from falling prey to gangsterism.

Councillor Ngcani said his immediate task when he took control of the ward after the 2016 local municipal elections was to tackle crime and unemployment and to fix homes that had been built without ceilings.

“In the 2017/2018 financial year, I managed to have the homes of 315 households fitted with ceilings and had electricity and plumbing put in. I managed to do that to about 750 houses.

“I also managed to do sidewalks. For a group of elderly and disabled people, I managed to get them trained in sewing.”

The task of the sub-council in Ward 99, managed and chaired by the ANC, is to ensure that service delivery took place. In addition, the sub-council has an oversight duty.

Asked what the ANC sub-council did wrong, Ngcani said: “I think maybe they were overwhelmed or maybe they were stressed because of the boundaries and demarcation. Sometimes you can forget your oversight on the other side of the road.” DM/MC