Rocklands: The birthplace of the UDF holds the key to Mitchells Plain 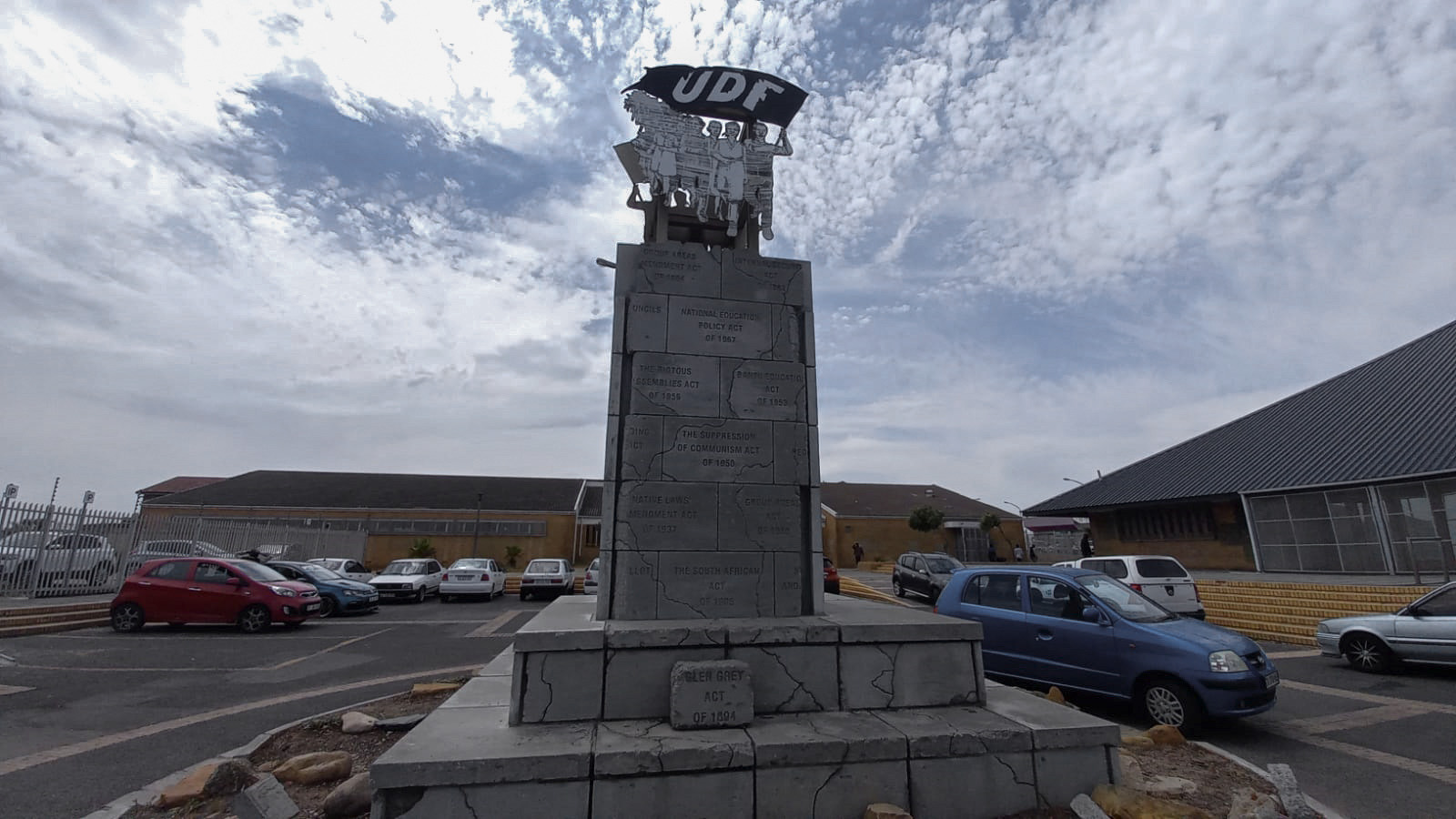 Rocklands was, during the liberation struggle, the heartbeat of the UDF. (Photo: Vincent Cruywagen)

During the liberation struggle, Rocklands in Mitchells Plain was the birthplace of the United Democratic Front (UDF), on 20 August 1983. Yet in the local elections in 2016, the DA took Rocklands Ward 81 with 90% of the vote.

Since the dawn of democracy in 1994 political parties have contested fiercely for the predominantly coloured votes in Mitchells Plain. Whoever won Ward 81, which consisted of Rocklands and parts of Portlands and Westridge, in effect won Mitchells Plain.

The DA recorded a landslide victory during the 2016 local municipal election by taking 90% of the votes, with the ACDP getting 2% and the ANC and EFF a meagre 1% each.

Out of a population of 38,932 in 2016, there were 20,125 registered voters and 68.9% cast their vote. Votes from the coloured community pushed the DA over the finishing line and on 1 November the party will again rely on coloured voters to put it back in this hot seat. 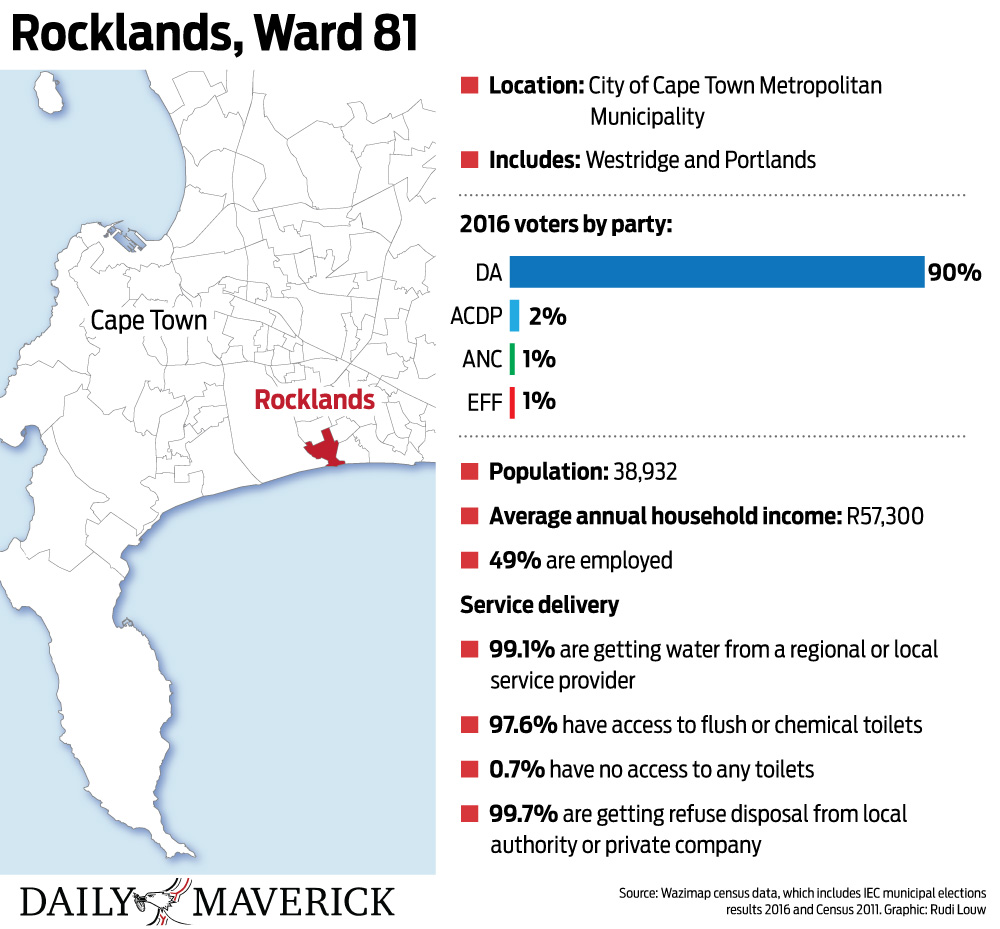 A walkabout in the area revealed strides had been made in terms of housing and basic service delivery. There were no informal structures, heaps of rubbish, overflowing sewage drains or potholes.

The most pressing issue – apart from gang violence – that was identified by residents was health services. Residents complained of waiting for up to 10 hours in pouring rain, being robbed and getting sick while standing in a queue before being attended to at the Mitchells Plain Community Health Clinic (CHC).

Pastor Franklin Williams, faculty board member and chairperson and chaplain at Lentegeur Hospital, summed up health services in Ward 81 as the “good and the bad”.

The good, he explained, occurred during Covid-19 when everyone came out to make sure that communities and cities were protected. But it is the long queues at hospital facilities, the bad, that remains a bone of contention.

“It is heartbreaking to see mothers and grandmothers standing from 4am till 3pm at Mitchells Plain CHC. I’m the chairperson of the Lentegeur hospital board and when I took on this position a year ago the first thing I said to the board members… was, if you don’t have it in your heart and in your mind that you are setting a legacy for yourself you are going to fail.”

Something needs to be done to improve the situation, he said.

On Thursday, 21 October, the gates of the Eastridge Clinic, adjacent to the Mitchells Plain CHC, were closed. A group of eight mothers with their babies in their arms stood outside the gate.

The mothers said they had appointments for the clinic that day, but when they arrived, a notice on the gate said that the clinic was closed for the day.

One of the mothers was 31-year-old Shihaam Cupido with her five-month old baby, Toufeeqah. She had an appointment to collect formula feed for her baby, who is underweight.

“I was phoned on Thursday morning to pick up milk. I arrived at the clinic around 9am and at 11am I was still standing in front of the closed gate. I don’t have money at all to buy milk and I’m dependent on the milk from the clinic.”

At around midday Cupido and the other seven mothers left without being helped.

Standing outside the Mitchells Plain CHC was Priscilla Hendricks (40), from Rocklands. She said the queue at the hospital, “is terrible on rainy days. I usually arrive at the hospital around 5am. By that time there was already a long queue. Most of the patients are soaking wet by the time they get into the hospital.”

She said people in the queue wait for up to 10 hours and sometimes people get robbed while waiting in the queue.

Hendricks has given up hope. She no longer attends the day hospital and uses her own home remedies.

“I would rather die at home than die standing in a queue at a hospital waiting to be treated by a doctor,” Hendricks said.

“The Mitchells Plain Community Health Centre is appropriately staffed to provide a wide range of healthcare services to the community. Scheduled clients are given appointments for the follow-up treatment and stable chronic elderly clients’ medication is delivered to their homes.

“This eliminates the need for those with appointments to come to the facility much earlier and having to wait, as long as they have appointments,” he said.

Crime in the ward

Crime in the ward is also a concern.

Getrude Moses (67) said: “One can’t even get a decent night’s sleep. A week ago I was up the entire night. Criminals removed my Vibracrete (wall)  in the yard – they got on to premises and took what they wanted.

“Here, poor me had to stand still inside my house and listen. There was nothing I could do. On another occasion guys were in my property cutting wires from the electric poles. Phoning the police is a waste of time.”

Westridge was once considered to be one of the safest places in Mitchells Plain but in the past months two murders have stirred up fear in the community.

On 1 June a 33-year-old man was shot and killed in Westridge.

In March, 61-year-old Denise Roman died in hospital after being shot in her home, apparently by a gunman who was chasing a gangster.

The crime statistics for the first quarter of 2021/2022, released by Police Minister Bheki Cele on 20 August, show that Mitchells Plain Police Station is among the top 30 stations in the province for violent crimes. Though Ward 81 did not feature in the stats, activist Michael Jacobs said that gang-related violence is prevalent and that many people don’t report it.

Ward 81 councillor Daniel Christians has a vision of development for black communities alongside the False Bay coastline.

“Our coast is a ghost coastline that can be transformed into a gold coastline. The False Bay coastline presents major opportunities to address the high unemployment in Mitchells Plain.”

The project, he said, is receiving attention under the DA administration.

His achievements in Ward 81 include the construction of two major traffic circles, one on Merrydale Road, Portlands, and one on Eisleben Road in Rocklands.