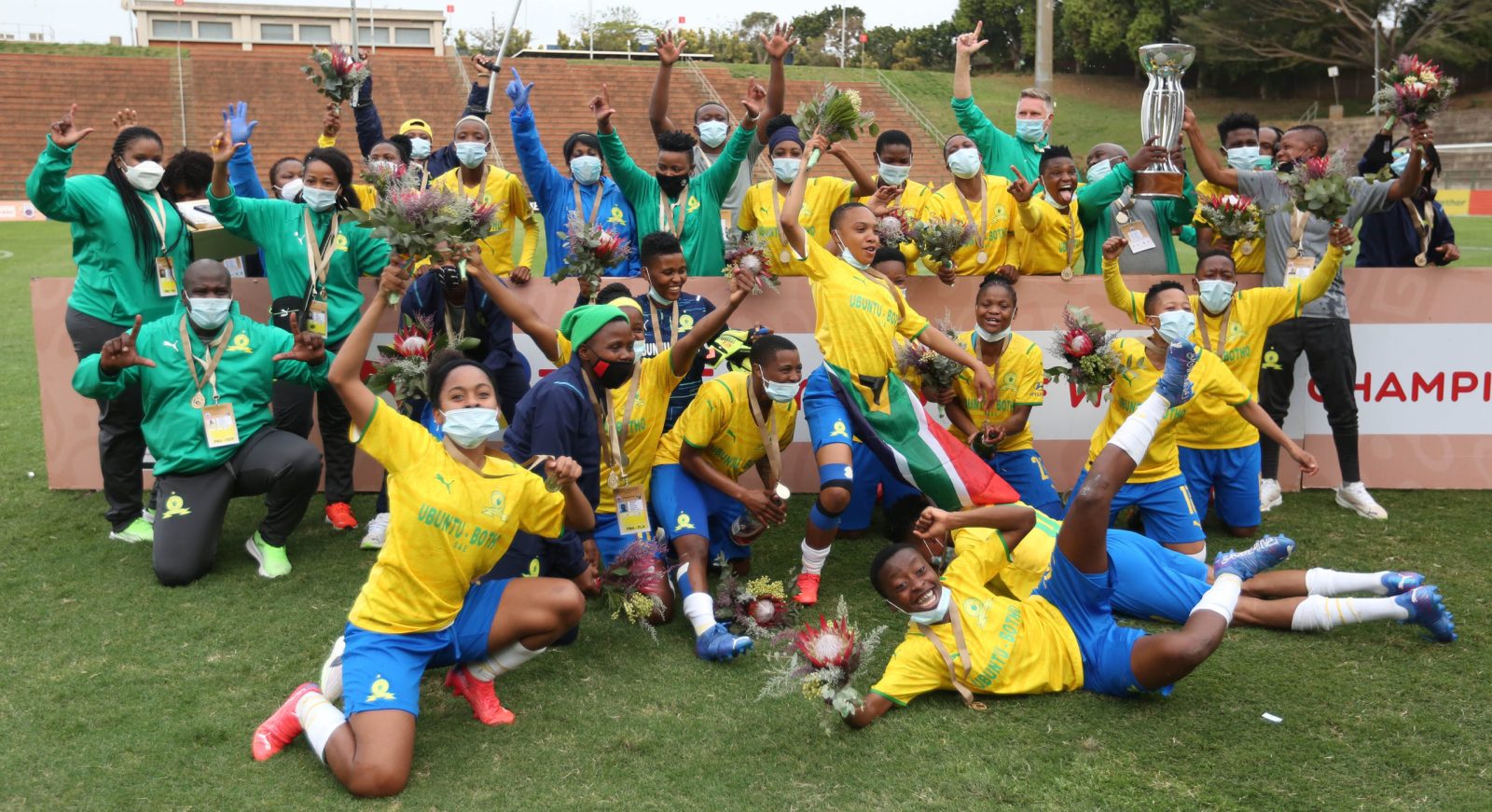 Having conquered every challenge on home soil, Mamelodi Sundowns are keen to test themselves against their peers in Africa and look forward to representing South Africa.

In the inaugural season of Hollywoodbets Super League, then simply known as the National Women’s League, Mamelodi Sundowns Ladies coasted to the title undefeated in 22 games. During that run, they won 21 and drew just one.

Covid-19 deprived the Tshwane side of an opportunity to stretch that streak when the 2020 season had to be shelved. But that year-long break has done little to halt the momentum of the Sundowns runaway train.

In 2021, Banyana Ba Style are just a handful of games from clinching a consecutive league title. More importantly, they are still unbeaten this season after 19 games – winning 18 and drawing one. They have also dominated in attack and defence, scoring 67 goals and conceding just nine during this run.

With the resources available by virtue of being part of the Mamelodi Sundowns family, it would be easy for the team to take their more under-resourced opponents lightly in a women’s football game that is still evolving in SA. But the club’s captain, Zanele Nhlapho, says it’s about trusting in their abilities and not taking any opponent for granted.

“We have people around who are always preparing us mentally so that we know that each and every game we play, we approach with the mentality that we want to win… As a team we have a fighting spirit to win everything that we see in front of us.

“We are not a team that takes anything for granted and says ‘This one, we know we are going to win it.’ No. We always go into games knowing that we need three points. How we get it doesn’t matter. What matters is us applying ourselves and executing the things we do in training on the day.”

Nhlapho also hailed the depth in quality of the team: “The coach is trying by all means to rotate the squad as much as he can. At Mamelodi Sundowns, even if Zanele Nhlapho or Bambanani Mbane are not there, you wouldn’t be able to see that that certain player is missing because whoever the coach gives a chance to play, they make sure that they give their best in the game.”

With the local section of the game firmly under control and the Masandawan in cruise control, the juggernaut will shift its focus and energy to continental football starting in November 2021.

The Confederation of African Football (CAF) greenlighted a long-awaited CAF Women’s Champions League in June 2020. The inaugural edition is set to be staged in Egypt.

After the regional qualifiers, eight teams, divided into two groups of four, have made the cut. Sundowns Ladies will represent southern Africa. Banyana Ba Style secured their place after defeating Black Rhinos Queens of Zimbabwe 3-0 in the final of the Council of Southern Africa Football Associations-organised qualifying tournament in September.

In a draw held in that same month, Masandawana were drawn in Group B alongside Kenyan outfit Vihiga Queens, Asfar Club of Morocco and one of the tournament favourites, Rivers Angels from Nigeria. Hosts Wadi Degla will have their hands full when they take on Mali’s AS Mandé, Ghana’s Hasaacas Ladies and Equatorial Guinean side Malabo Kings in Group A. The top two sides from each group will go to the knockout stage to fight for a place in the final.

“It’s an exciting group, I’m really happy that we’ve got Rivers Angels in our group, I’m also happy that we’ve got Vihiga Queens from Kenya. Fortunately, I’ve managed to see some of their games that they’ve played during their qualifiers. The only closed book to us is Asfar from Morocco. We’ll need to go out there and find out how they play and how they apply themselves,” said Sundowns Ladies coach Jerry Tshabalala.

“We are ready to go to Egypt. If you want to be the champions, you need to play against the strongest opponents from Africa.

“We’re doing our homework, we’re ready for [the opposition] and we’re looking forward to representing South Africa quite well.”

The team will clash with Vihiga in their opening encounter of the tournament on 6 November, before facing Rivers three days later, and closing off the group phase with a battle against Asfar on 12 November.

The coach says his side is aware of their first opponent’s strengths and will work on quelling them. “They’ve got one of the best strikers in Jentrix Shikangwa. But we are not just singling out any players; we are doing our homework.”

Sundowns skipper Nhlapho said they were excited to test themselves against a different challenge from the ones they encounter in SA weekly. The experienced defender spoke about their excitement for the opportunities that would likely come their way with the growth of this continental competition.

“We can’t wait to go to Egypt and represent South Africa. The teams we play against locally, we’ve been playing with them for a while now. And each season we are always winning,” Nlapho said.

“So, we sat down with our coaches plus management and said ‘because we are always winning here in South Africa, it’s good for us to go out there and face a new challenge from those teams.’ It’s not going to be a walk in the park. They are strong teams and they will challenge us. We will feel the fact that we are playing in the champions league,” the 30-year-old added.

“But because we are ready mentally and physically, we hope we will go there and bring back the trophy.

“We know that most teams in Africa are very physical, and we are good when we play the ball on the ground, moving it around. So, we need to go out there and apply ourselves the way we did in the Cosafa regional qualifiers. Then I think it’s going to work for us.”

The inaugural edition of the Women’s Champions League will kick off on 5 November with the final scheduled for 19 November. DM168