Two-horse races: These are battlegrounds where ANC and DA could expect further damage

There were a handful of municipalities in 2016 where only two parties won election to their councils. These municipalities are in the main expected to be battlegrounds on 1 November. However, the national landscape is vastly different to that of 2016, when the African National Congress (ANC), the Democratic Alliance (DA), Economic Freedom Fighters (EFF) on a national level and the Inkatha Freedom Party (IFP) in the northern part of KwaZulu-Natal won the overwhelming majority of seats.

The two biggest parties are even more vulnerable than they were in the 2019 elections. There are also more serious competitors this time, parties who are threatening to inflict even more hurt on the ANC and the DA at the ballot box.

Three of the two-horse race municipalities are in the Sarah Baartman District in the western part of the Eastern Cape. The ANC is in control of two and the DA one. 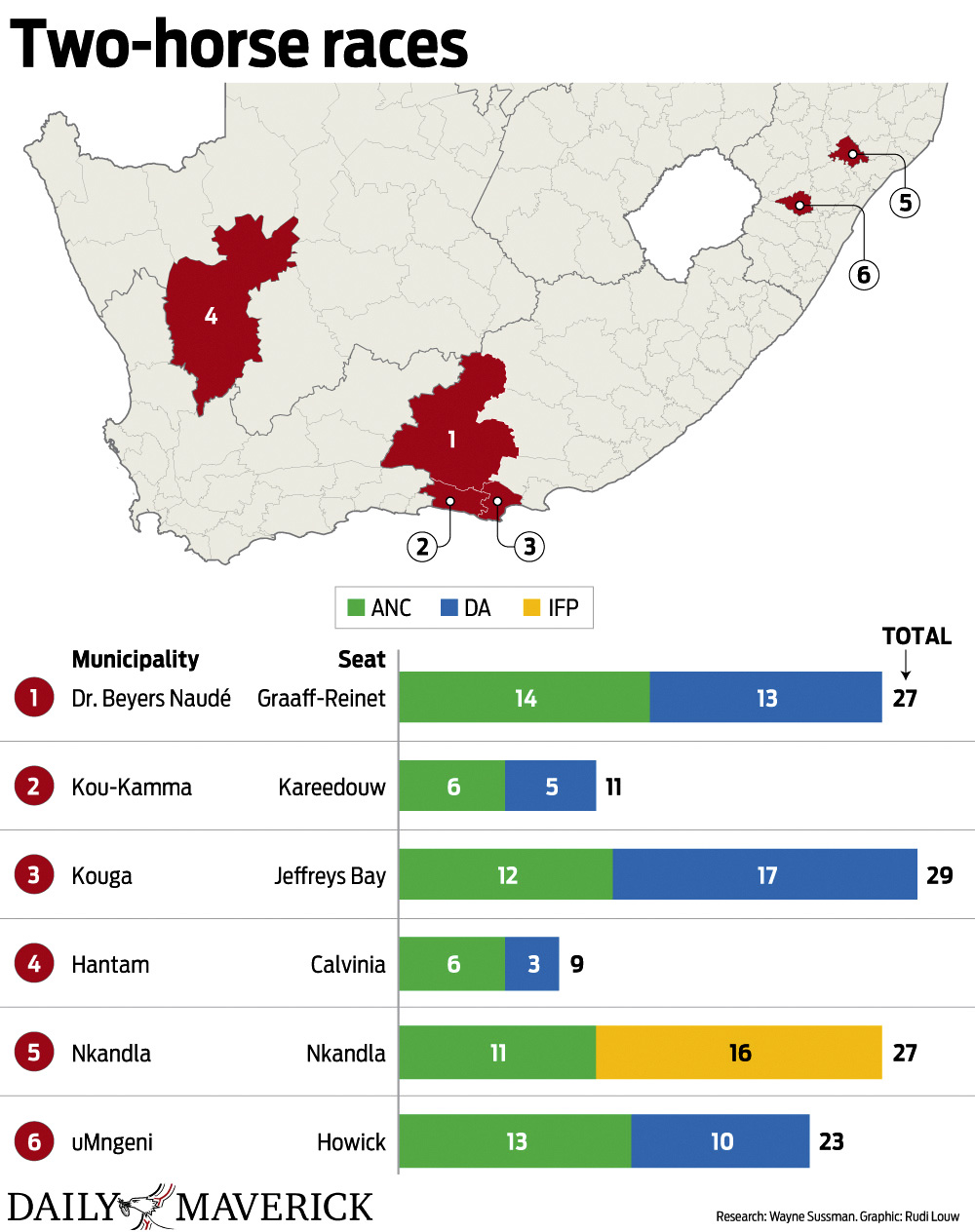 This municipality includes towns such as Humansdorp, Jeffreys Bay, Hankey and Cape St Francis. The prime example of a vote for a small party being a wasted vote is in Kouga where in 2011, the DA, Freedom Front Plus and a local party called Kouga 2000 received more votes than the combined total of the ANC and a regional party which would have worked with the ANC.

However, only two parties won seats — the ANC and the DA. The ANC won 15 out of 29 seats, with the DA left stranded on 14 seats. In 2016, the DA won an outright majority here with 17 out of 29 seats. The ANC fell to 12 seats but again, they were the only parties represented on the council with the EFF and FF+ falling short.

The field is also a lot more crowded this time, with parties like the Patriotic Alliance (PA) and Good also making a concerted effort to win a seat on the council. There are five independents on the ballot, including a former ANC ward councillor who is running in a different ward this time.

The DA will hope for similar blue waves in Jeffreys Bay and Cape St Francis as there were in 2016, and hope that the voters there do not take the appetising FF+ bait. The ANC’s strongholds are in Ramaphosa Village in Patensie and Kwanomzamo in Humansdorp. The ANC will hope that it is as popular in Ramaphosa Village as the person the village is named after, and that it will keep its losses to the EFF down.

This large municipality includes Graaff-Reinet, mohair mecca Jansenville and the gateway to the Baviaanskloof, Willowmore.

The ANC bested the DA by just below 2,200 votes in 2016 to win 14/27 seats, with the DA bagging 13. On the provincial ballot in 2019, the ANC again had the edge on the DA but this time both parties would have fallen short of an outright majority, with the EFF and FF+ having done enough to win seats.

The municipality has seen its seat allocation reduced from 27 to 24. This even number means that there is a real chance of a hung council.

There are only three independents on the ballot here. A former DA ward councillor has the highest profile of the independents. There is also a local party called the Service Delivery Movement (SDM) which is hoping to make an impact here. The PA will hope that the momentum from the north of the country extends here too.

The ANC will need to get its base out in the uMasizakhe township next to Graaff-Reinet. The ANC dominates here and its ability to appeal to voters in uMasizakhe has been the chief reason that the ANC keeps pipping the DA in Dr Beyers Naudé. The ANC needs the voters of Die Draai area in Jansenville to come out and vote for the ANC again. The DA’s strongholds are the Graaff-Reinet town centre, Steytlerville and Aberdeen.

This municipality has featured strongly in this election campaign. When John Steenhuisen walks to illustrate the difference between the DA government and the ANC government he walks over the Western Cape border into the Kou-Kamma municipality on the Langkloof Road in the Eastern Cape. This municipality includes Joubertina, Kareedouw and Clarkson.

This small municipality has four independents running. Other parties aiming to break the duopoly of seats are the EFF, FF+ and PA.

The ANC won five of the six ward seats in the municipality in 2016, with places like Clarkson and Misgund being reliable ANC strongholds. The DA does best in Joubertina and Krakeelrivier.

Nkandla is most strongly associated with former president Jacob Zuma and his homestead. The municipality is under IFP control. The IFP has 16 of the 27 seats, while the ANC fills the remaining 11 slots. The IFP won a safe seat off the ANC in a by-election in November 2020. This was an ominous sign for the ANC that the party is in a precarious position in Nkandla.

Nkandla is a rural, inland municipality in the King Cetshwayo District. It is near the towns of Eshowe and Melmoth.

The IFP faces the biggest threat in this election from the 10 independent candidates, two of whom come from the IFP ranks. The IFP has a similar challenge in neighbouring Mthonjaneni (Melmoth) where the IFP mayor also decided to stand as an independent. The ANC will have to deal with the African Transformation Movement (ATM) and the Abantu Batho Congress (ABC), two parties formed by allies of President Zuma. The EFF will believe it can finish third this time, picking up voters from both dominant parties.

The IFP tends to run up the numbers in Mkwana, Ekuphiweni and Nkungumathe. The ANC’s stronghold was close to the Nkandla homestead. Ward 13 (Mzwaneni Ntulwana) was where the ANC did best in 2016 before it lost it in a by-election late last year.

This municipality is just north of the provincial capital Pietermaritzburg. It is in the Midlands, and is centred around Howick. uMngeni is also where the Mandela Capture Site is. Other towns include Hilton and Nottingham Road.

The ANC won 13 out 23 seats here in 2016, with the DA winning 10. The DA would need a shift of two seats to win an outright majority here. It is of course easier said than done. In 2019 the ANC beat the DA by a wider margin in Umngeni on the provincial ballot, with the EFF also making inroads.

The DA has invested a lot of resources in this contest. John Steenhuisen has made multiple visits to the area. The party will also hope that ANC factionalism will depress the party’s formidable get-out-the-vote operation.

There are six independents on the ballot, with the ANC more likely to be affected than the DA. However, none of the independents are big names in the area. The EFF, ATM and ABC are parties who could also take votes from the ANC.

The ANC devastates the opposition in the Mpophomeni township near Howick. In 2016, 95% was low for the ANC in voting districts in Mpophomeni. It often won more than that in the voting districts in and around Mpophomeni. If the ANC gets its voters out in Mpophomeni, it will feel good about retaining control here. The DA does best in Howick and Hilton. It will hope that the many old-age home residents applied for their special votes and turn out for the DA.

There are two two-horse race municipalities in the Northern Cape. Hantam and Richtersveld (Port Nolloth). This article focuses on Hantam.

This municipality is centred on Calvinia, Loeriesfontein and Nieuwoudtville. It has the tallest postbox in the world, and boasts that it has only one of two windmill museums in the world. This municipality covers a lot of territory, with about 250km between its northernmost and southernmost points. The ANC won five of nine seats here in 2016 and won a seat off the DA in Loeriesfontein in August 2019 to give them six seats and reduce the DA to three seats.

The municipality has increased in size from nine seats to 13 seats, with two new wards being created. The ANC is most reliant on the town of Brandvlei, while both the ANC and DA hope to win the hearts and minds of Calvinia voters.

The FF+ finished third here in 2019 on the provincial ballot, which saw a similar result to that of 2016, where the ANC would have won five seats and the DA four. Other parties fancying their chances will be the PA, Good and a regional party called the Namakwa Civic Movement (NCM). The NCM’s headquarters are in Springbok, far from Hantam. It will be interesting to see if it can make a mark here. DM