2021 LOCAL ELECTIONS: STATE OF OUR CITIES 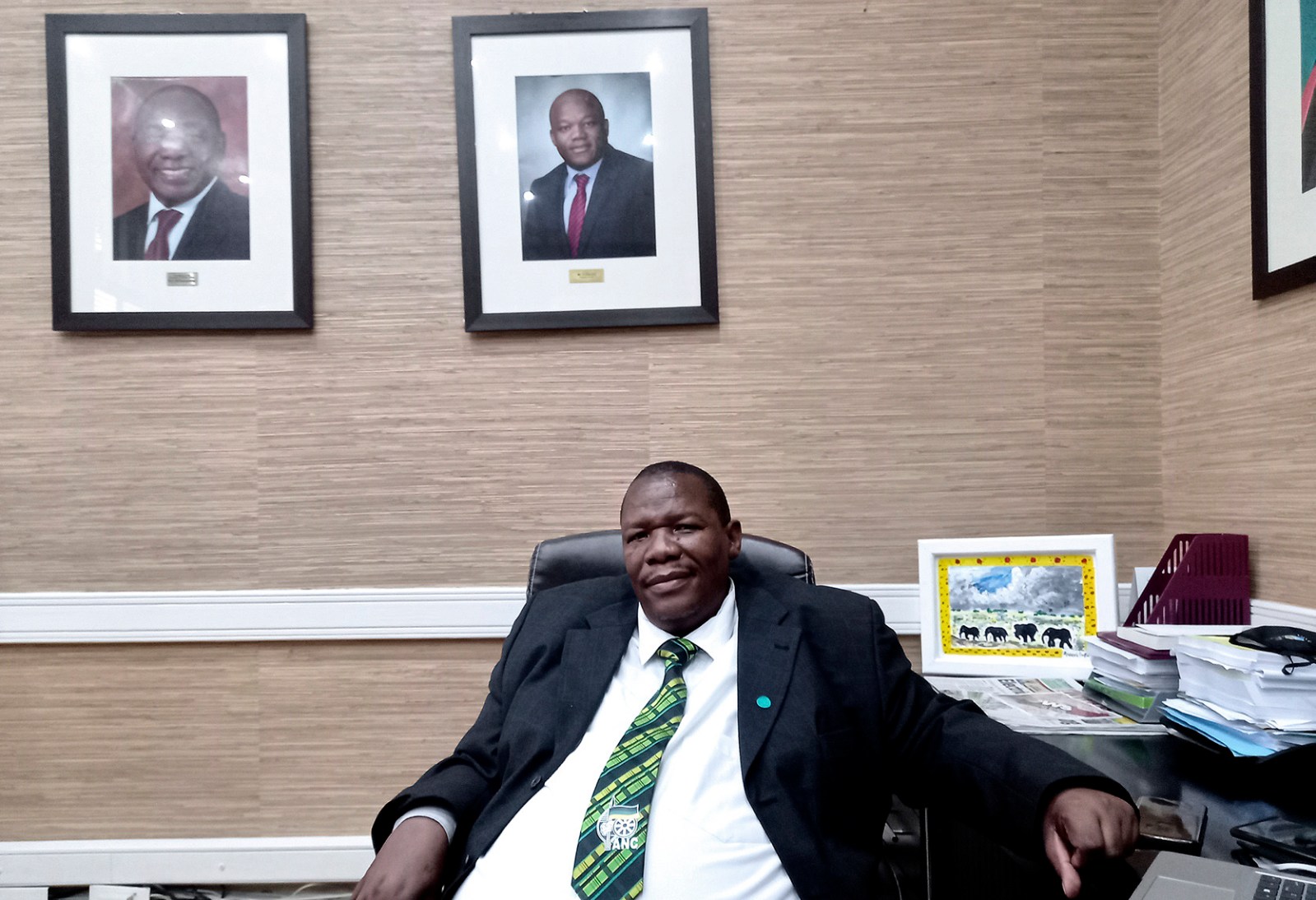 Msunduzi mayor Mzimkhulu Thebolla says Pietermaritzburg has made significant strides under his leadership, although the results are not yet visible. ( Photo: Sandisiwe Shoba)

KwaZulu-Natal’s administrative and legislative capital has been plagued by maladministration, poor service delivery, financial woes and political infighting within the governing ANC. But mayor Mzimkhulu Thebolla says things are poised to turn around. 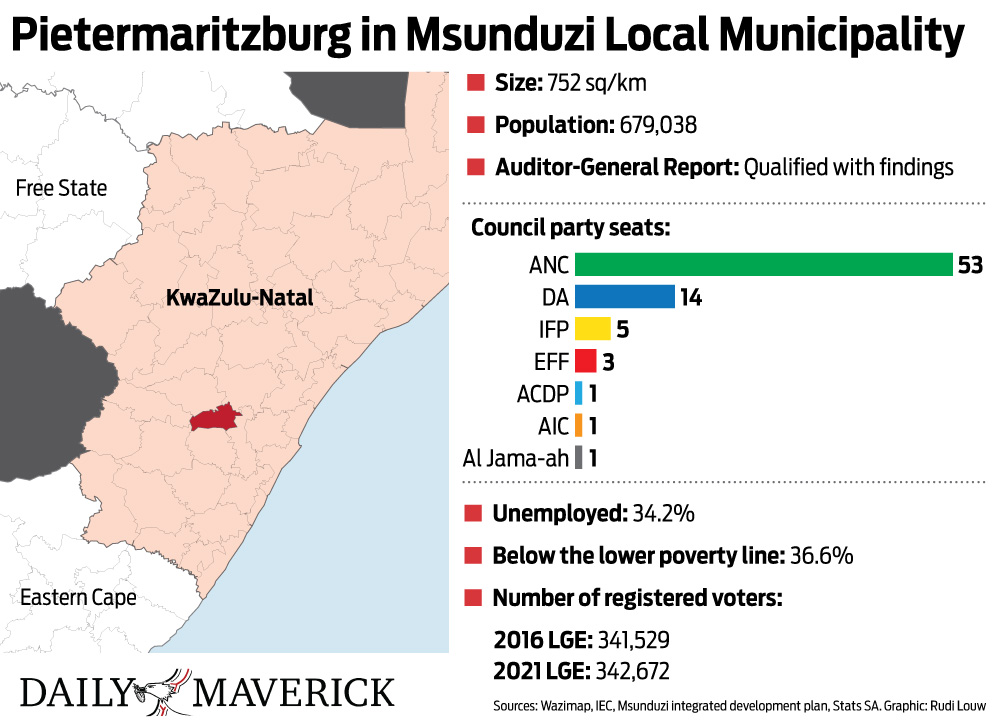 July’s civil unrest saw Pietermaritzburg engulfed in a thick plume of smoke as widespread burning and looting ravaged KwaZulu-Natal’s capital city. But, before protesters chanted “ay’khale” in support of former president Jacob Zuma, the city, under the aegis of the ANC-led Msunduzi Local Municipality, was already falling apart.

“And when they perform roadworks, they leave everything a mess. It’s just bad.”

In the run-up to local government elections a week away, the CBD looked uncharacteristically clean. The phenomenon of “neatening up the city” in anticipation of polls was evident. Outside the City Hall, a large ANC election banner was suspended above the traditional starting point of the Comrades Marathon. Between election posters and backdoor abortion pamphlets, street poles carried advertisements from the municipality encouraging residents to apply for indigent support.

Msunduzi mayor Mzimkhulu Thebolla said the city had made significant strides under his leadership, although the results were not yet visible on the ground.

Speaking to Daily Maverick in his office in the City Hall, Thebolla, who has been in the mayoral seat since 2019, noted that audit opinion had shifted from disclaimed in the 2016/17 financial year — under former mayor Themba Njilo — to qualified with findings in the latest Auditor-General’s report. Njilo was fired as mayor by the ruling party.

When asked whether he would reassume the mayoral seat after the elections, Thebolla, who is on the party’s PR candidate list for the municipality, said the decision was ultimately “up to the ANC”.

There has been speculation that Thebolla’s future hangs in the balance as a dominant faction in the ANC’s Moses Mabhida region wants former ANC Youth League (ANCYL) regional chairperson Mxolisi Mkhize to take over.

Msunduzi has been plagued for years by mismanagement and political infighting within the ANC. The municipality has twice been placed under administration.

According to the mayor, council meetings were disrupted, portfolio committees failed to sit, there was a string of vacant senior management posts and outstanding disciplinary cases. In June, Msunduzi was dealing with 48 disciplinary matters across departments.

Thebolla said the municipality had now achieved “political and administrative stability”, but Msunduzi’s financial viability is still a monumental challenge.

The city’s consumer debt stands at nearly R5-billion. The Auditor-General noted a high debt-collection period of 154 days. Unauthorised expenditure increased by 232% (from R170-million to R565-million) as a result of “poor budgeting”, specifically relating to the increase in the number of consumers struggling to settle accounts due to the impact of the Covid-19 pandemic, the Auditor-General’s report noted. The result is the municipality does not have enough funds to meet its obligations.

Thebolla said the city had a substantial indigent population that was not registered for free basic services. A recruitment drive is currently under way.

“In terms of the latest community survey, we are supposed to be sitting at more than 50,000 applied indigents in the city, but our indigent register is sitting at just over 6,000.”

The mayor said the municipality’s chaotic billing issues were being addressed. Apart from recent power outages, residents have had their power disconnected for alleged arrears on municipal accounts. New billing software was on the way, he said.

“We acknowledge that consumers are still receiving incorrect bills as we speak,” said Thebolla. Part of the problem is incorrect consumer information, for example, deceased residents are still being billed for services.

The auditor-general flagged R78-million in security services that Msunduzi had failed to account for, which affected the municipality’s negative audit opinion. In February, The Witness reported that 19 councillors and four senior officials were afforded private security which reportedly cost the municipality R27.9-million in the 2019/20 financial year.

The mayor said the failure to submit financial information to the auditor-general was because the municipality did not have sufficient time to get statements from the security company to which work had been outsourced.

The threat of political violence

Thebolla was accompanied by a bodyguard when we met him.

Pietermaritzburg is a hotspot for political killings, according to the 2018 Moerane Commission of inquiry. Last week, EFF councillor candidate Thulani Shangase was shot dead in Plessislaer. On Wednesday last week, Police Commissioner Bheki Cele visited the area, which has the country’s second-highest murder rate according to the latest crime statistics. The spike in political killings in KwaZulu-Natal has reportedly sent some ANC councillor candidates into hiding.

Last month, three women were killed in a drive-by shooting during an ANC community nomination process in Inanda.

Professor Bheki Mngomezulu, political science professor at the University of the Western Cape, said in a Daily Maverick article that ward councillor positions are often seen as “lucrative”.

“…they can earn a handsome salary, get closer to dishing out tenders and get other remunerations on the side. That is why many people enter the political space — not to serve the people, but to enrich themselves.”

Pietermaritzburg has made headlines for problems with refuse removal. Thebolla claimed turnaround times for waste collection had improved drastically. However, disgruntled workers recently went on strike, leaving the city in an even dirtier state than usual. Msunduzi was granted an interdict against striking workers at Durban’s Labour Court on Tuesday last week.

The South African Human Rights Commission won a court case against Msunduzi over the city’s landfill site, which has caught fire several times, engulfing the city in smoke and endangering the health of nearby residents. The municipality was ordered to come up with an action plan, resulting in a proposal to transform the landfill into a waste-to-energy plant to generate electricity.

Despite the prevalence of potholes, faulty streetlights and ageing infrastructure, Thebolla said the city’s maintenance budget had been increased from 1% of the budget when he first came into office, to 6%. “The norm is supposed to be 8% of our budget,” he said.

Power outages are negatively affecting the city’s businesses, which are still recovering from July’s unrest. CEO of the Pietermaritzburg and Midlands Chamber of Business Melanie Veness said she could not remember a time when “investor confidence was this low”.

“What is particularly frightening is that a number of big Maritzburg businesses have decided to mitigate future risk and have opened up plants elsewhere,” said Veness. “If things don’t improve, you’ll see factories gradually move their operations to the new sites.”

The CBD, Edendale, Plessislaer, Barnsley Industrial, Brookside and Westgate were hardest hit by the looting, according to Veness. Provincially, Durban and Pietermaritzburg were the worst-affected areas and the province lost an estimated R20-billion.

“Any way you look at it, our economy is going to take years to recover (some say 15) and we’ve lost thousands of jobs — retrenchments are the order of the day as businesses take stock and weigh the future.”

Msunduzi accounted for 7.4% of KwaZulu-Natal’s GDP in 2016 at R 51.7-billion, according to the Msunduzi Integrated Development Plan.

At the Jika Joe informal settlement, where a formal housing development is under way, residents are at odds with the municipality over plans to relocate them to a transit camp.

Thapelo Mohapi from the grassroots shack dwellers movement Abahlali baseMjondolo said the municipality had failed to consult the community before construction began.

“It continues to be a trend where people are not engaged and undermined. They consider people living in informal settlements as people who cannot think and therefore the municipality will hire people to think on their behalf,” said Mohapi.

He explained that Jika Joe residents were reluctant to move to temporary accommodation as conditions were often sub-par, lacking basic services such as electricity, water and sanitation infrastructure.

The plan is to relocate about 300 families to make way for the second phase of the Jika Joe housing development.

Treasury MEC Nomusa Dube-Ncube announced during the tabling of the provincial budget in March that the provincial Human Settlements Department would develop 1,164 accommodation units at Jika Joe during the 2021/22 financial year.

Mohapi said that, due to the lack of consultation, there was no clarity on who would benefit from the new housing units.

“In any case, when something like this happens, there’s bound to be corruption, allocating certain individuals in these homes rather than those who are most in need.”

The notorious informal settlement named after the late taxi boss Jika Joe Dlamini, has a reputation as a dirty, lawless and dangerous place run by slumlords who rent out small rooms to people needing accommodation near the CBD.

According to Mohapi, residents have organised themselves and cleaned up the area, which lacks basic services such as refuse collection.

“We believe that it is only when the poorest of the poor organise themselves that we are able to get out of this situation, because the government has failed us.” DM