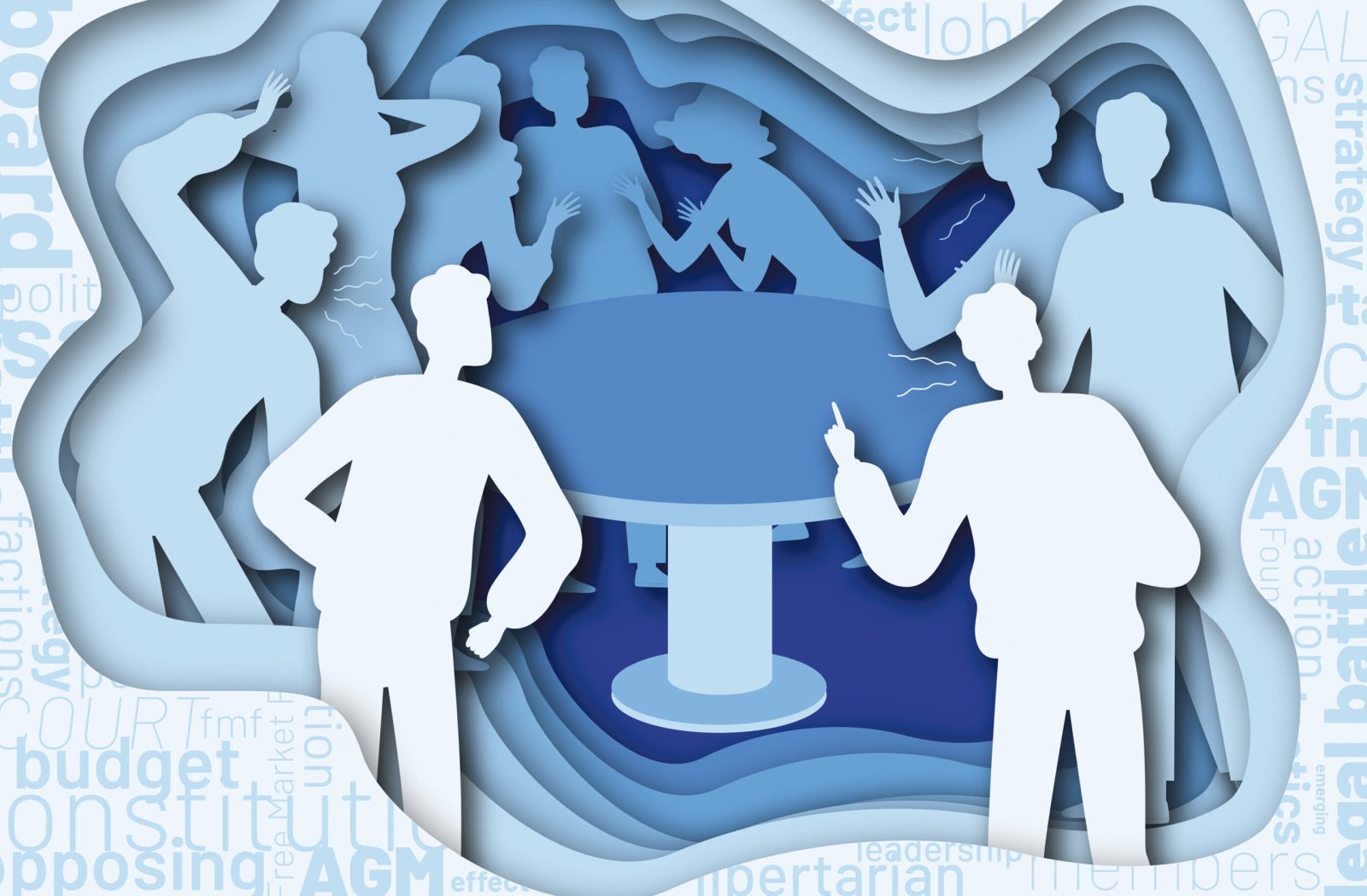 The future direction of the organisation is unclear and court papers have been filed about the status of an AGM held more than a year ago. Opposing sides accuse each other of underhand tactics.

The Free Market Foundation is in turmoil with two factions fighting an existential battle over the future direction of the organisation. The battle has become so intense, court papers – with fractious affidavits and replying affidavits – have been issued.

The ostensible legal issue is the status of the outcome of a heated annual general meeting (AGM) that took place more than a year ago, with both sides claiming the other used underhand tactics to try to gain control over the organisation.

But, behind the scenes, there is also a dispute over the character of the organisation and whether it should “confront” the government about critical issues, including, but not limited to, expropriation without compensation.

The other irony is that the organisation has been, almost throughout its decades-long history, perennially short of money and has operated on a shoestring budget. But then, last year, it got a huge R50-million donation to enhance one of its most popular projects, Khaya Lam, which organises and finances township residents in their efforts to get title deeds to their homes.

What happened at the AGM a year ago, which saw different sides shouting each other down and the then chair Ayanda Khumalo simply leaving the meeting in disgust and frustration, is much in dispute. The court papers suggest a group supporting Louw, called the “Stratcom group”, lobbied furiously before the meeting with the intention of elbowing some people off the board.

They used, it is claimed, a now disputed “positive and negative” voting system and arrived at the meeting with illegitimately obtained proxies. The effort by the Stratcom group initially seemed successful, but the opposing group then grabbed hold of the organisation and its finances.

The “self-appointed” new board included some of their opponents on an enlarged board in an effort to hold the organisation together. They have proceeded to present themselves as the legitimate leadership, and, more recently, have proposed deep changes to the constitution to cement their position, according to the Stratcom group.

Sometime after this, Louw was demoted to “president” of the organisation – yet another irony. This uncomfortable situation persisted in the background until Michael Hull, one of the organisation’s ordinary members, brought things to a head by issuing a legal challenge in August to question the legitimacy of the board.

The existing board, which is headed by Rex van Schalkwyk, is vigorously opposing this action, in which Hull is essentially asking the court to re-establish the pre-2020 board on the basis that the board elections were unconstitutional. Hull’s effort is to try to force the organisation into a mediation process to secure its future and possibly also to restructure it from being a non-profit organisation into something more formal, particularly since its financial status is now more secure.

The South African version of the Free Market Foundation is unusual and remarkable internationally. Although often written off as a group of libertarian extremists, Louw has, over the years, bent over backwards to develop cordial relationships with all political parties.

In the process, he has taken up causes that focus not only on business in general but particularly on the poor, proposing free-market solutions for all South Africans, rich and poor. The most notable example has been the lobbying work the organisation has done for street traders, which dates back way into the apartheid years.

As a consequence, Louw has been fêted around the world and has been given many awards by free market-supporting groups for this open-minded and inclusive approach.

Yet South Africa’s parlous economic situation has imposed new stresses on liberal organisations, notably, for example, the Institute of Race Relations. It is evident that new voices emerging want a more explicit and oppositional strategy, and see the old approach as too “accommodationist” and ineffective.

For Louw, this change would substantially undermine the policy work the foundation does, which relies on effective lobbying. The change is also seen by proponents of the older approach as antithetical to its effectiveness.

Both sides dispute the effect of the foundation’s newly minted riches on the organisation, with both snarling at each other and hinting darkly about whether the money, notionally ring-fenced into the Khaya Lam project, is being used effectively.

The situation is complicated by the fact that the existing board doesn’t think the issue is essentially about policy.

Asked about the organisation’s approach to expropriation without compensation, Van Schalkwyk said: “The ANC has become a serial violator of the rule of law and of the Constitution. The predictable outcome is that there is now no difference, in the collective mind of the ANC, between state and party.

“When individuals perceive that they are above the law, as is the case with the ANC officialdom, it should come as no surprise that they should start to behave lawlessly… The result is that South Africa has become, and there is no polite way of saying this, a criminal state.”

For other board members, this approach is just beyond the pale, and far too political. Member Lawrence Mavundla, who is the founder and president of the African Cooperative for Hawkers and Informal Business and has represented dozens of high-profile organisations, is horrified by this approach.

The organisation was always “liberal and non-political”, he said, and its agenda was to ensure the economy is liberalised to allow the free market system to benefit everybody.

“We must reconvene under the old constitution and appoint a board. That is the only way forward,” he said.

But Van Schalkwyk is not convinced, and believes the new board is sufficiently “inclusive” and should continue. But he is also despairing about whether mediation will help. Asked about the prospects for a resolution of the issues, he said: “Save by a withdrawal of the case, the issue, as formulated, cannot be resolved.”

A date for the case has not been set yet. DM168