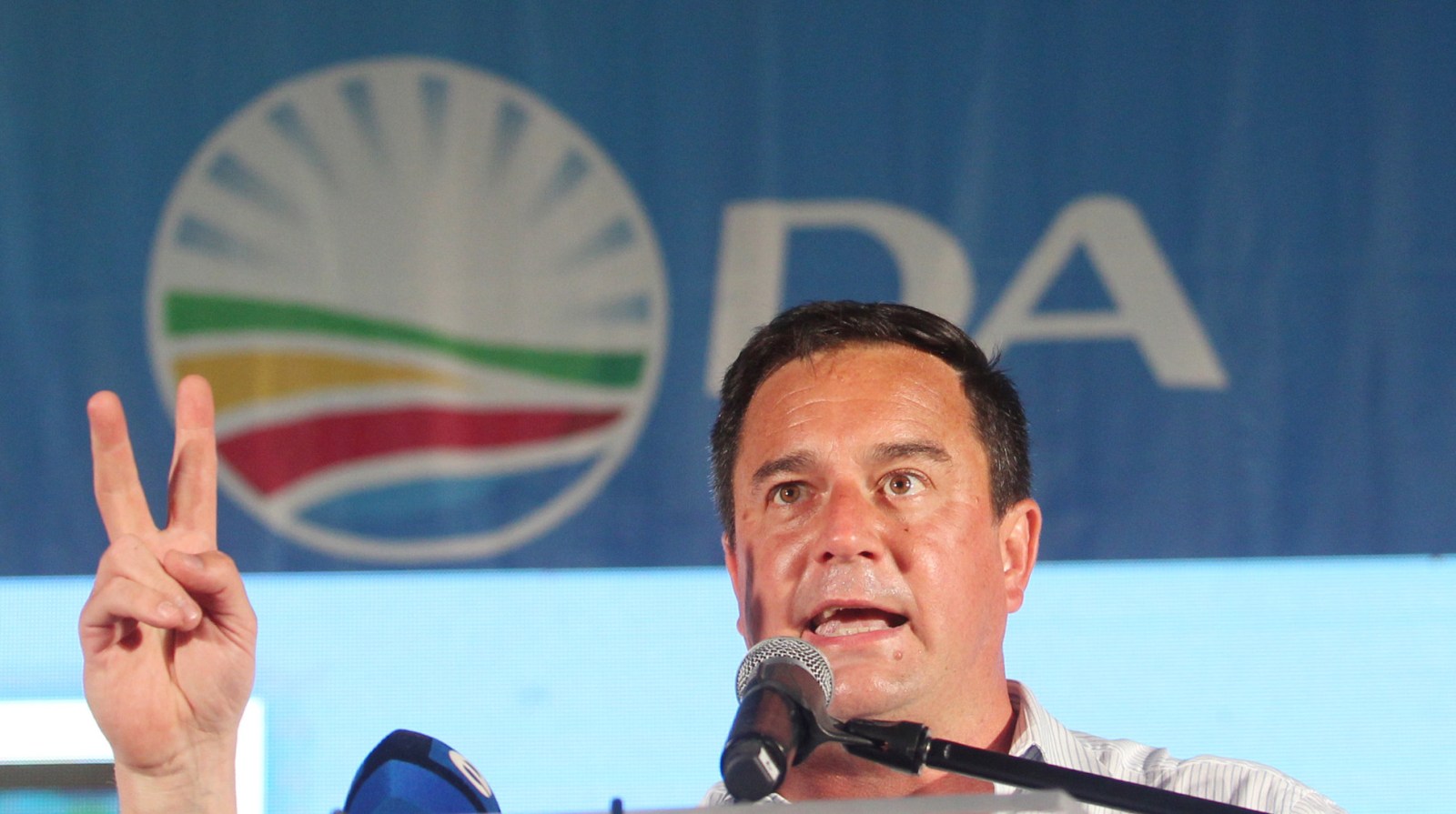 Steenhuisen quoted government figures that say 64 municipalities are considered delinquent or dysfunctional, and News24’s Out of Order survey that found 43 more municipalities on the verge of collapse. This meant more than a third of South Africa’s 278 municipalities were failing.

‘The one thing that all these broken towns and cities share is an ANC local government,’ says Steenhuisen, sweat glistening on his forehead.

Logic would dictate that the time is ripe for an opposition party to take over, especially one with proven governance successes and clean audits, such as the DA. Even when it is criticised for not having pro-poor policies, administrators are quick to point out that the indigent are still better served in functional municipalities than in failing ones.

“The one thing that all these broken towns and cities share is an ANC local government,” Steenhuisen said, sweat glistening on his forehead. Whoever put up the DA’s stage on Saturday forgot that, on a good October day, the sun beats down harshly by 11am.

Still, if election campaigns were beauty pageants, the DA deserves a crown. Its campaign was well-planned and executed, and unlike some other big parties, it budgeted ahead of time and paid its staff, and for its posters.

On paper, the party ran a great campaign. It embraced new and experimental technologies early on during the Covid-19 lockdown — Steenhuisen was elected at a conference with electronic voting — while most ANC leaders were slogging it out over who should step down from the party or get the next contract for overpriced personal protective equipment.

When there was uncertainty about an elections postponement, the DA soldiered on with its virtual campaigns and shows, all the while tracking sentiment with its internal polls. These must be working, because the party often adapts its campaigns accordingly. It is possibly also the reason why the party rolls out prime-time ads on radio, for example, voiced by Helen Zille.

When Steenhuisen says: “Forget for a moment about all the emotional appeals from parties who beg for your loyalties because once, long ago, they played a role in the liberation struggle,” he’s making sense, because it’s true that many of the failing municipalities are ANC-governed.

Steenhuisen told City Press on Sunday that the party is “going to do a lot better than we did in the last election”. This was in reference to the 20.7% the party got in the 2019 general election.

He’s possibly aware, though, that he’s comparing apples with kiwi fruit, because local and national elections are different. The DA usually does better in a local election, for a number of reasons, including how national totals are calculated. But then, despite appearances to the contrary, the DA isn’t just about logic — it’s also about politics.

Steenhuisen knows that the party is unlikely to match the almost 27% it got in the 2016 local government elections under his predecessor, Mmusi Maimane, when turnout was high due to strong anti-Zuma sentiment, and Cyril Ramaphosa was still sailing low in the State Capture sea with his presidential ambitions. Steenhuisen also knows that a bad election performance could see him booted out of the leadership, which is why he chooses to go with the 2019 figure.

Some in the DA say it seems that Ramaphosa might have convinced some DA voters to give the ANC another chance to renew itself, despite many others saying the ANC has broken one promise too many. The ANC last week also appealed to the nostalgia of some voters by rolling out leaders from the good old times when there was still some economic growth and hope: leaders like Thabo Mbeki, Phumzile Mlambo-Ngcuka and Kgalema Motlanthe.

Many DA campaigners on the ground in rural municipalities say their long hours and many years in communities might sway voters this time. Yet Tebogo Tlhokwe, DA caucus leader in Emfuleni, said on the sidelines of Saturday’s rally that campaigners’ biggest challenge was “the stereotype” and the propaganda “about the DA being an apartheid regime agent”. He said he firmly believes the party is “the only one” that caters for people from all race groups.

Even as Steenhuisen was roasting on that stage like a chicken in extra hot sauce, a fresh social media controversy was playing out in the background on the very platforms where the party was broadcasting its event.

Video clips were doing the rounds showing The Burning Platform host Gareth Cliff denying One SA Movement spokesperson Mudzuli Rakhivhane’s experience of racism by calling it “anecdotal”, while Steenhuisen looked on with a smirk.

Nando’s deemed the show as damaging enough to withdraw its sponsorship. Steenhuisen’s reaction was, “It’s got nothing to do with me.”

Still, what happened on this webinar isn’t the kind of incident that would win over voters who are undecided but might want to be persuaded that the party has an impressive track record in local government. People are emotional and, while they might be confronted by the same facts, they think with their hearts as much as their brains.

Steenhuisen on Saturday also asked voters “to forget about brand new parties that spring up before every single election like a field of overnight mushrooms, and then fade away just as quickly afterwards” and “the small parties that just don’t have the numbers to properly represent you, and certainly don’t have the numbers to keep the ANC or EFF out”.

What if voters used their heads and concluded that a party with a future should also be one that has leaders who can face up to the ghosts of the past that undeniably still haunt us? Who, then, is there left to vote for? DM