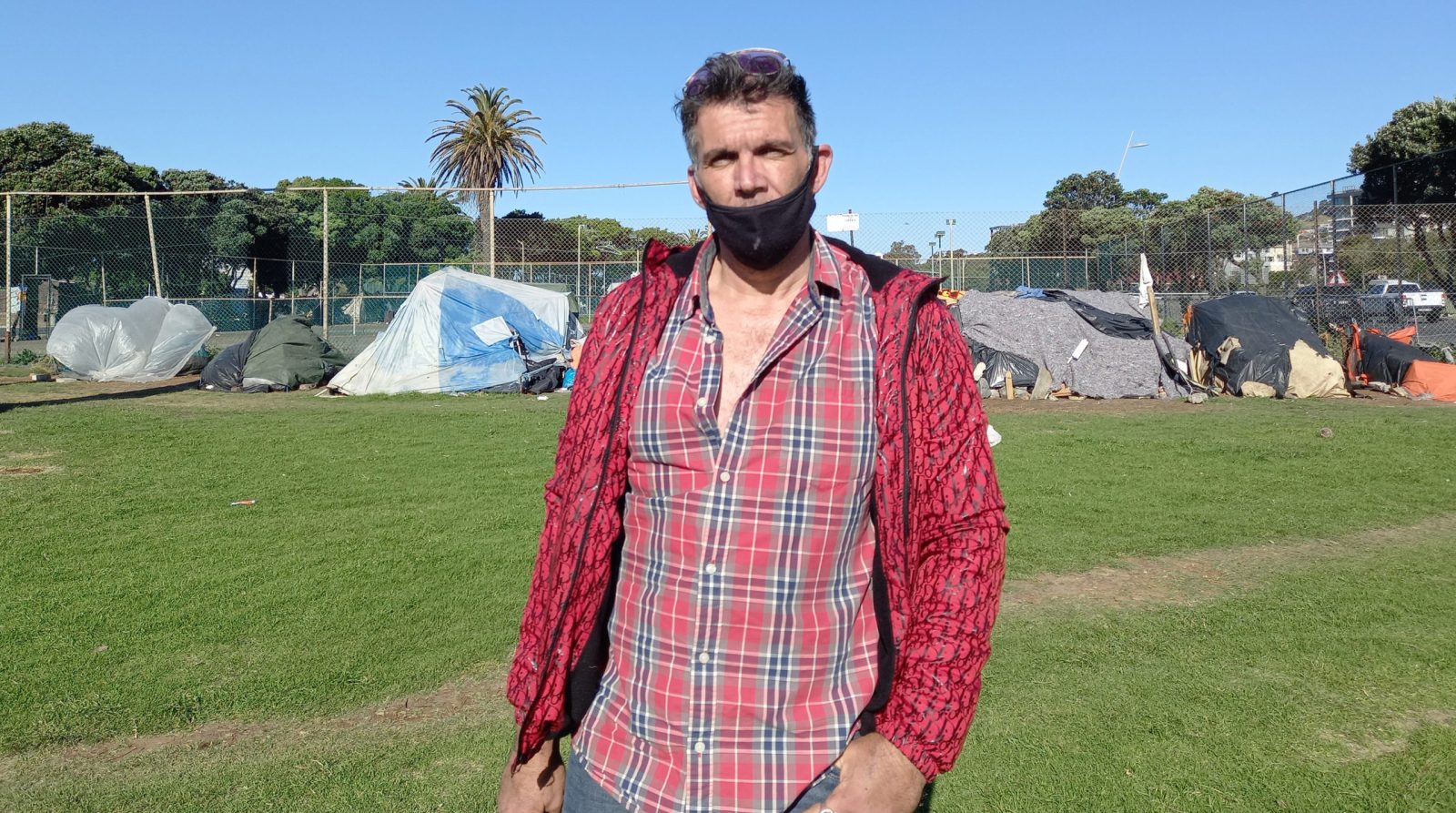 He believes his chances of winning the election are slim, but for Cape Town Ward 54 candidate Carlos Mesquita, the real win would be changing public perceptions about the homeless community.

Carlos Mesquita went from record company boss to spending five years on the streets of Cape Town when he lost it all to substance abuse. Now he is running for ward councillor in Sea Point, the same area where he “skarrelled” for a living.

“I am one of the few people that has got a lived experience of having a home and being homeless,” Mesquita told DM168.

We met him on a sunny afternoon in Sea Point. There are no accurate figures for the number of homeless people in the area but estimates suggest more than 800. Cape Town has more than 14,000 people living on the streets.

Young Mesquita was an overachiever whose drive was fuelled by deep insecurities. “I had a Portuguese mother and a Spanish father. I was called a ‘sea-ka**ir’. People didn’t accept me as white at school.”

He also struggled with his sexuality and was mockingly called “Nancy Drew”. By the time he was in his early 30s, he’d opened a successful music store and an award-winning record label. But personal problems and the drug-fuelled culture of the music industry led to disaster. He went from travelling the world to digging in bins for second-hand items to sell.

The 52-year-old has been off the streets for more than a year, in which time he helped establish Our House, an “independent living” accommodation for the homeless, and founded the Rehoming Collective, an NPO aimed at rehoming the homeless in a dignified manner.

Last year, he founded the Strandfontein Homeless Action Committee (SHAC). He was housed at the Strandfontein temporary homeless shelter at the height of the Covid-19 lockdown – “the worst experience of my life”.

The City of Cape Town decommissioned the shelter after criticisms over health, safety and human rights violations.

Mesquita, who considered himself apolitical, initially refused to stand as a Ward 54 candidate when he was approached by Good. On the fourth attempt, the fledgling party, led by Patricia de Lille, won Mesquita over with its manifesto. “They were the first party to ask me to give them insight on their policy for homeless people.”

It was also the only party on his radar that addressed the homelessness issue in a progressive manner. Good’s mayoral candidate, Brett Herron, said the party’s decision to field Mesquita as Ward 54 candidate was inspired by his “unique connection to the Atlantic Seaboard”.

Sea Point is where Mesquita gained success, fell from grace, and is now rising from the ashes. “By the age of 30, I had a lovely view from my apartment in Selborne Place in Sea Point; 20 years later, I had a different room with no view in Pollsmoor prison as I sat awaiting trial for either being in possession of drugs or possession of suspected stolen goods, as life happened to me and I landed up homeless in Sea Point,” he reflected in a Facebook post.

The debate about how best to manage homelessness in Sea Point has turned ugly.

In May 2020, Sea Point resident Peter Wagenaar was the victim of an arson attack after the car he used to distribute food to the homeless was set alight. Feeding schemes in the area have also been followed, threatened, harassed and cyberbullied, and some ratepayers are concerned street-dwellers are bringing down property values.

Jacobson has been criticised for his antagonistic stance on homelessness. In July he earned the ire of activists when he distributed a pamphlet with pictures of naked or semi-dressed homeless people. It read: “Enough is enough. Why are vagrants still in occupation of the Atlantic Seaboard?”

Jacobson and Mesquita have been at odds on social media. The homeless rights activist recently decried an “unacceptable” post shared by Jacobson on World Homeless Day, which featured poorly PhotoShopped images implying that homeless people were an eyesore during the Cape Argus Cycle Tour. Images of bicycles had been superimposed on pictures of homeless individuals.

“Paul Jacobson launched me as his opponent, calling me the sewer rat,” said Mesquita. Jacobson refused to comment on Mesquita’s candidacy, but told DM168 he wished “all standing ward nominees best of luck with their campaign and at the voting polls”.

“I’ve told Paul many times to ‘open your mind’,” said Mesquita. “Our ideologies are different, but what we want is exactly the same.” Ultimately, his desire is to assist people to get off the streets. If elected councillor, Mesquita has two main priorities: to establish a facility for the homeless in Sea Point and to create employment opportunities.

“Accommodation for people is the first thing to give them their dignity back, then employment and social services as well as rehabilitation services.”

Shelters in Cape Town were consistently full, and available bed spaces were often in areas far away from economic opportunities, said Mesquita.

“If I were to go back to the street today I would live in Sea Point’s streets rather than go to a shelter.”

Human rights abuses such as rape, food shortages and poor sanitation were rife in these facilities, said Mesquita.

The paternalistic nature of shelter accommodation is also a deterrent to the homeless. Mesquita believes in dignified housing as an alternative.

“These are adults. They don’t need to be told at every corner what they should do.”

Mesquita, who is “fed up” with the City of Cape Town’s policies, said criminalising homelessness was worsening the problem.

The City has conducted several highly publicised raids in the past few months, one of which involved the eviction of 21 homeless people living opposite the Sea Point police station. The City also recently passed a new unlawful occupation by-law, alongside updates to the Streets, Public Places and Prevention of Noise Nuisances by-law.

Under the latter by-law, persons found sleeping unlawfully in public spaces will receive a warning and be offered alternative shelter. If they refuse the shelter offer and are found guilty of an offence they can be fined or imprisoned.

The constitutionality of the Streets by-law is being challenged in court.

“They’re pushing people away from services and it doesn’t make any sense.”

Although he is a rookie politician who admits that he’s perceived as a one-trick pony with a slim chance of winning the election, Mesquita stepped into politics with one goal in mind: to change public perceptions about the homeless.

“I didn’t go out and say I want to win this thing. Winning comes in different forms,” he said. “I call myself the unwilling politician and I am.” DM168