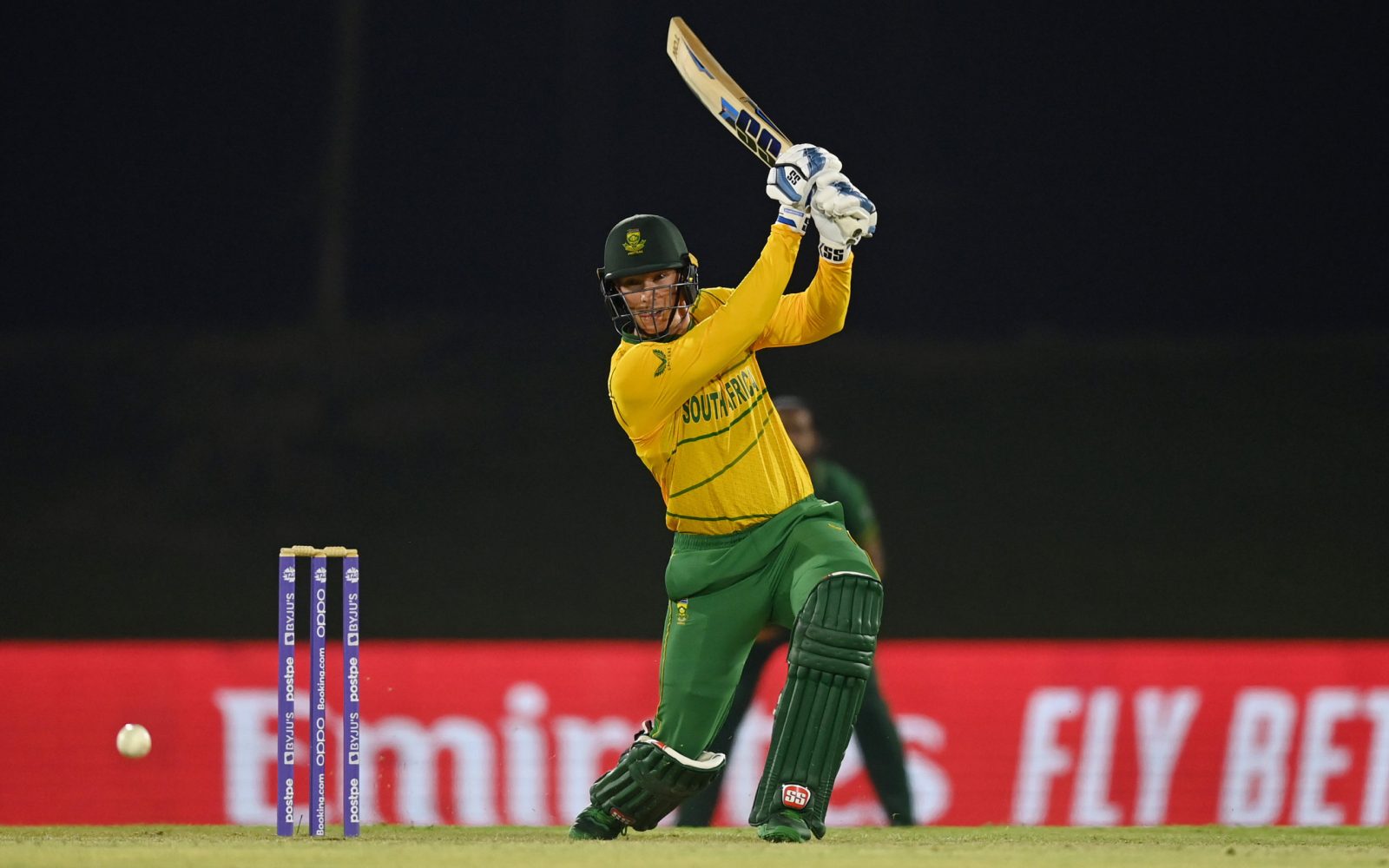 The Proteas will start the International Cricket Council T20 World Cup on 23 October with some confidence after a week of morale-boosting pre-tournament wins and strong individual performances.

Rassie van der Dussen has emerged as the unlikely epitome of the current Proteas team – where graft and commitment supersede sheer talent – and they can now start the T20 World Cup in the United Arab Emirates with some confidence.

His excellent century (101 not out), scored off a mere 51 balls to steer South Africa to a last-ball, six-wicket win over Pakistan in their final pre-T20 World Cup warm-up game, was his first in this format.

It was also a boost for the Proteas as they head into the seventh staging of the tournament as heavy underdogs but in decent form and without the pressure of being among the favourites. They also beat underrated Afghanistan in the warm-ups and are well primed for their meeting against Australia in their tournament opener on 23 October.

Van der Dussen’s knock against a formidable Pakistan bowling attack, under the stress of a heavy run rate that touched 14 an over at one stage, was both excellently paced and magnificently executed. It was a victory for hard work over sheer talent.

Of course, the team has some extremely talented players such as fast bowler Kagiso Rabada and batsman Aiden Markram, but largely it is a group made of players making the most of what they have.

Van der Dussen is the perfect example of that trait. He is technically sound and aesthetically pleasing. But he’s not AB de Villiers or Faf du Plessis, and that’s okay. He is authentic and he’s a battler with a good temperament.

Captain Temba Bavuma, who contributed a steady 46 from 42 balls against Pakistan, is cut from a similar cloth and spinner Tabraiz Shamsi is also in that category. To paraphrase the old sports idiom, they know their jobs and do their jobs.

T20 is the least predictable of cricket’s three main formats because there is so little time to correct errors. The value of a dot ball or a boundary is amplified in the shortest version of the international game, which is why temperament and execution are likely to trump talent.

“The lesson here is to take it ball-by-ball, have your game plans, trust in them and play the situation of the game according to the run rate required,” Van der Dussen said after thrashing a four to reach three figures off the last ball of the match.

“If you can stay calm in those middle overs, not panic even though the required rate gets up to 13 or 14, that’s the learning I’ll take from today.

“We chased quite a big score, but we knew the wicket was quite good. We needed to give ourselves a chance up front, but we were a bit behind in the powerplay.

“But we knew, throughout the middle, we had our boundary options, and we could execute them, and we would get close. The thought was to always get a guy in during the last five overs and then put them under pressure.”

For the Proteas, more than any other team in cricket, they have to handle the baggage of never having won a World Cup in either T20 or One-Day cricket. New Zealand haven’t either but the Black Caps seldom start a tournament as favourites.

The Proteas of previous generations have gone into various white-ball tournaments as favourites and always come up short. The scar tissue is there but the current crop, several of whom have been members of various doomed campaigns, are doing their best to downplay the bad memories.

One of the men who has experienced World Cup defeat is hard-hitting middle-order batsman David Miller. He smashed two sixes off the final over against Pakistan to help South Africa get over the line, and was in a positive frame of mind going into the tournament.

“I genuinely don’t like to overthink the past in the sense of taking on baggage and stuff like that,” Miller said this week.

“Yes, there’s a lot of chat about the past and this and that. But it’s about controlling what we can think of in the moment. I know it’s clichéd, but it really does help if you reset the clock and just prepare really well, and control each game as it comes.

“It’s difficult to win a World Cup. Only one team can win. So things have got to go your way. Yes, in the past things haven’t gone our way. But it’s not something we’re shying away from. We realise it’s a great opportunity to change our lives as players and as a team.”

Downplaying the amount of baggage the team carries with each passing tournament failure has been a theme in the build-up. Journalists have dutifully raised the subject and everyone from Miller and Rababa to skipper Bavuma and Markram, have shrugged it off.

“I don’t want to talk about it too much. We have a challenge that’s in front of us. No one has tried to lose games in the past, and we’re coming in with the same mentality. Whether we have baggage or not, it’s not worth talking about.”

The Proteas lack some experience and they lack a proven record at International Cricket Council tournaments. But this time around they also lack the pressure of being in the conversation about being potential winners.

No one gave them a chance when they needed 47 runs with three overs to go against Pakistan, but they somehow prevailed. Self-belief is vital because past experience means that no one outside their camp believes they can win a World Cup. And that suits them just fine. DM