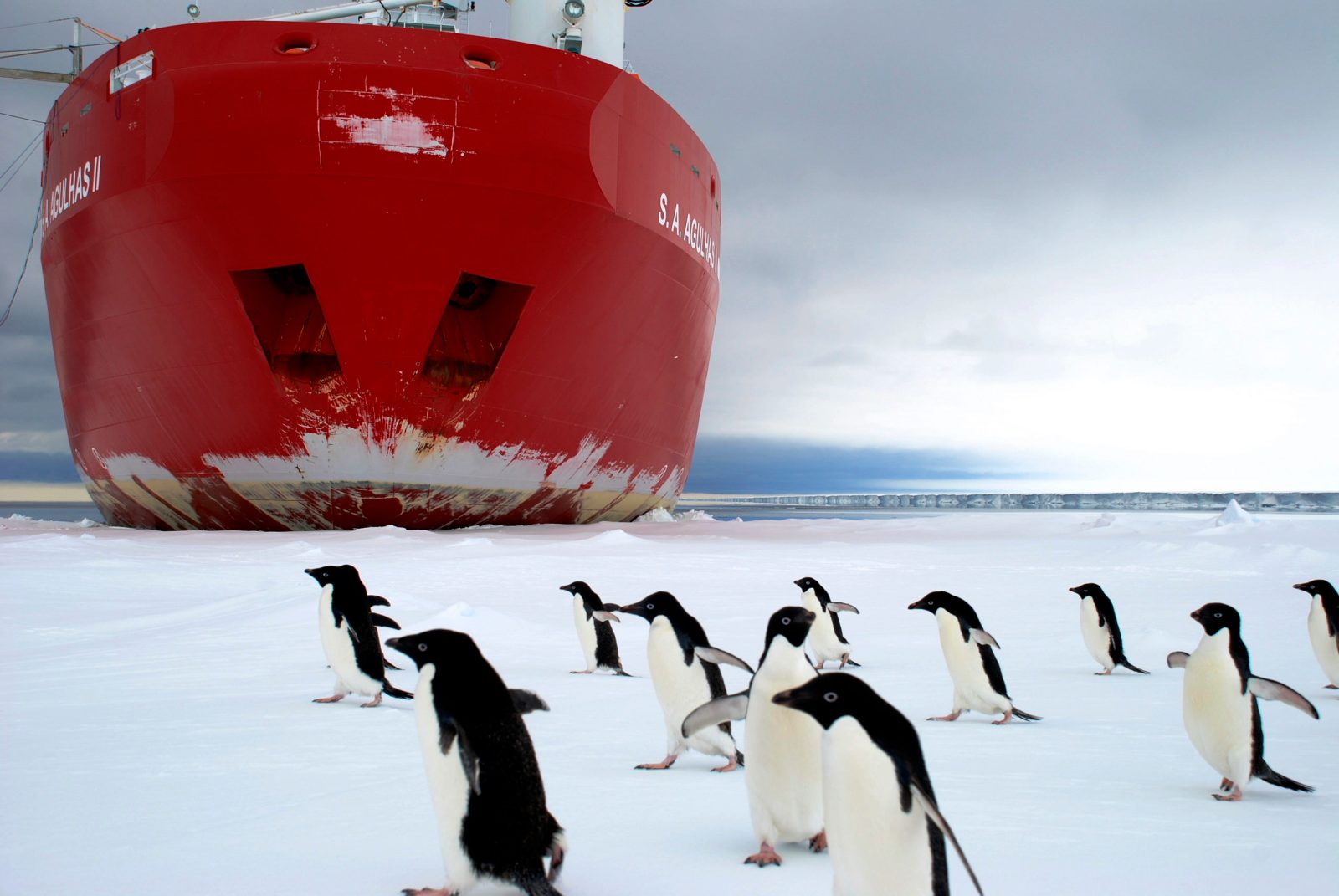 Adelie penguins with the SA Agulhaus II in the background. Adelie penguins are common along the entire coastline of Antarctica and are one of only two penguin species (the other being the Emperor penguin) which live and breed exclusively on Antarctica. (Photo: Rosca de Waal)

The Southern Ocean’s role in driving the global carbon cycle may be stronger than expected as the biological carbon pump is not ‘switched off’ in winter as previously thought. These revelations are good news, but may not be enough to offset the massive impact of climate change and specifically carbon emissions.

This has been revealed by South African scientists in the most comprehensive winter study to date, conducted in the Southern Ocean during July and August 2017, showing for the first time that phytoplankton are active during the icy cold and dark winter months, and not only during summer.

Scientists from the Centre for Trace and Experimental Biogeochemistry (TracEx) in the Department of Earth Sciences at Stellenbosch University (SU) were able to show that despite unfavourable growth conditions for phytoplankton during winter, biological activity is ongoing in the Southern Ocean, although not to the levels observed in summer.

The Southern Ocean is one of the most important regions in the world for the uptake and storage of atmospheric carbon dioxide (CO2), a process termed the biological carbon pump. It is facilitated by photosynthetic phytoplankton. Consequently, the role of the Southern Ocean in annual carbon drawdown may be stronger than previously thought. The research was published recently in two publications, here and here.

Why are phytoplankton important? Phytoplankton are microscopic, single-celled plant-like organisms suspended mostly in the top 100m of the oceans. Using sunlight for energy and dissolved inorganic nutrients, phytoplankton convert CO2 to organic carbon and form the base of the marine food web, according to a statement from Stellenbosch University.

Dr Ryan Cloete, from the Department of Earth Sciences at the university, explains that CO2 is a greenhouse gas, therefore its presence in our atmosphere contributes to the trapping of heat.

“Phytoplankton facilitate the transfer of atmospheric inorganic CO2 to organic carbon through the process of photosynthesis. This organic carbon is then transferred to the ocean floor when the phytoplankton die and sink. Eventually the carbon will be buried and incorporated into the rock record where it may remain for millions of years.

“In other words, phytoplankton are our biggest allies because they are crucial in transferring the CO2 from the atmosphere to the deep ocean and rock — this process is called the biological carbon pump.

“The global oceans absorb about 25% of the annually emitted CO2 from human activities. A disproportionately large part of this uptake is linked to the Southern Ocean, which accounts for about 50% of the annual oceanic CO2 uptake and where about 40% of the man-made CO2 since the beginning of industrialisation is stored.

“Therefore, the Southern Ocean plays a substantial role in mitigating the effects of human carbon emissions and understanding this carbon sink and its related processes is crucial for future climate projections.”

Showing that phytoplankton are somewhat active in the Southern Ocean during winter is a good thing because it means the biological carbon pump is not “switched off” in winter, which means phytoplankton are working to reduce our atmospheric CO2 levels year-round.

Professor Alakendra Roychoudhury, a specialist in environmental and marine biogeochemistry at Stellenbosch University and head of the TracEx research group, says the Southern Ocean acts as a central hub for global circulation, whereby waters formed near Antarctica are transported northwards into the Indian, Pacific and Atlantic oceans.

“Therefore, as a result of the biogeochemical processes taking place in the Southern Ocean, we see effects on a much larger scale.”

But there is a stark warning: this great ocean conveyor belt of water can take almost 1,000 years to complete the journey.

“For example, the melting of Greenland’s ice sheet from increased greenhouse gases in our atmosphere is contributing freshwater to the Arctic Ocean, which results in changes in density and therefore affects the flow of the current. A similar scenario is anticipated for the melting of the Antarctic ice sheet. This will affect the entire marine food web, as nutrient pathways are disturbed and therefore [so is] the fishing industry, leading to food insecurity.

“In addition, there will be feedback mechanisms in our climate as ocean currents are also the main transfer of heat around Earth and changes to this will affect weather systems. Ultimately, climate change will influence these smaller-scale processes first which, over time, will influence the larger circulation patterns,” says Roychoudhury.

The issue with disturbing these polar environments is our lack of understanding of future impacts, he explains.

“Different processes have different feedback loops. For example, as more CO2 is dissolving in ocean waters, the pH of the ocean is decreasing, which has significant consequences for life in general. To counter the progressively acidifying ocean, carbonate minerals present in the ocean dissolve and negate the pH change. Because of these feedback processes, the planet will self-correct over time. However, most geological processes occur at long time scales compared with a human lifetime. The rate at which humans are inflicting climate change is much faster than natural buffering processes and thus, for the survival of humans, these feedback loops may not be sufficient.”

To date there has been little understanding of the Southern Ocean owing to the extreme conditions, freezing temperatures and gale-force winds between latitudes 40° and 60° south — the “Roaring Forties”, the “Furious Fifties” and the “Screaming Sixties”.

More than a little choppy

Cloete says he has been on several cruises on the SA Agulhas II, but weather during the winter 2017 winter cruise was particularly rough. “I recall a maximum swell of around 13m during one of the storms in the so-called Roaring Forties.

“During these conditions, everyone has to remain indoors for safety reasons. I remember during dinner, a sudden big wave resulted in everyone’s chair sliding across the dining hall. The tables are fixed in place with barriers to prevent plates and food from shifting, and we all ended up crammed to one side. Trying to walk around when the ship was rocking was always humorous although the crew made it look easy.

“Trying to sleep in a storm was also difficult and I woke up as I was falling out of my bed on more than one occasion. As we cruised further south, outside temperatures were always well below freezing. When the wind picked up the apparent temperature dropped to as low as -20°C at times. The inside of the ship, however, was always pleasant thanks to amazing insulation. We often worked while it was snowing and even had a braai while it was snowing during one of the ship’s social evenings.” DM/OBP